A highly decorated biopic that salutes the life of a highly decorated military hero, Sergeant York stands as an inspirational, reverent portrait of bravery, spirituality, and patriotic fervor. Gary Cooper won a well-deserved Best Actor Oscar for his understated portrayal of World War I soldier Alvin York and director Howard Hawks brings his stirring story to the screen with customary craftsmanship. A new remaster from the best surviving nitrate elements yields a superior transfer, and excellent audio and a nice supplemental package enhance the appeal of this top-notch Blu-ray presentation. Highly Recommended.

Though gangster films put Warner Bros on the cinematic map, the studio also produced a number of prestigious biopics during Hollywood's Golden Age that garnered both critical and popular acclaim. The Story of Louis Pasteur, The Life of Emile Zola, Juarez, Dr. Ehrlich's Magic Bullet, Yankee Doodle Dandy, and Knute Rockne, All American - to name but a few - remain stellar portraits of real-life figures, but Sergeant York stands above them all as a premier example of biographical filmmaking.

With a minimum of invention and maximum of heart, director Howard Hawks' stirring salute to the most decorated American soldier in World War I reflects the deep and abiding humility of its subject. The understated film may focus more on the character of Alvin York than his heroic exploits on the battlefield, but such introspection only heightens our admiration for this brave and honorable American and the enduring, inspirational film that bears his name.

York, who grew up in a remote backwoods area of Tennessee and was a hard-drinking rabble-rouser and sharpshooter before religion transformed his life, is best known for his valor and leadership as a corporal during the Meuse-Argonne Offensive in France in 1918. Almost single-handedly, York killed 25 Germans and captured a whopping 132 during the bloody battle that stands as the second deadliest in American history. His courage, mettle, and grace under fire put him in a rarefied military class, but the fact that York abhorred violence and applied for conscientious objector status due to his religious beliefs (his request and subsequent appeals were denied) before embracing his role as a soldier make his deeds even more impressive. 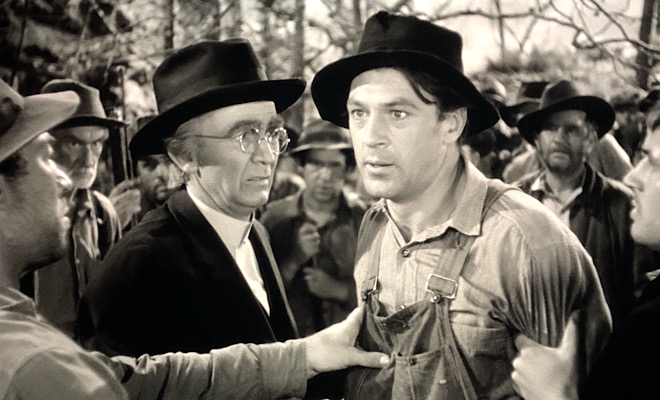 During its leisurely first half, Sergeant York chronicles the personal evolution and maturation of York (Gary Cooper), an amiable yet aimless man whose love affair with booze and penchant for trouble stymie his growth and concern his stern, pious mother (Margaret Wycherly). Hawks, with customary acuity, immerses us in the distinctive culture, isolation, and hardscrabble atmosphere of rural Tennessee, and effectively depicts York's eventual spiritual awakening (care of a lightning bolt), devout adherence to biblical teachings, and a burgeoning romance with spunky teenager Gracie Williams (Joan Leslie).

Isolated from the news and unaware of life beyond his secluded valley, York is ignorant about World War I when he receives his draft notice, and after his attempts to register as a conscientious objector fail, he reports to boot camp in Georgia. Much like another real-life American hero, Desmond Doss of Hacksaw Ridge, York is ridiculed and scorned because of his religious beliefs, but perseveres and becomes a standout recruit, in large part due to his superior rifle skills. The offer of a promotion to corporal, though, forces York to weigh his patriotism and commitment to saving the world from tyranny and suffering against his ardent belief that killing another human being is a cardinal sin.

York's heroics, which earned him the Medal of Honor and other lofty citations from U.S. allies, constitute only about 15 minutes of the movie's somewhat bloated 134-minute running time (it takes 75 minutes just to get York to boot camp), but the realistic battle scenes are both impressive and moving. Though more than a bit of World War II propaganda creeps into this World War I tale, the heart and soul of York resonate throughout. Less is more here, and it's that simplicity that keeps the film grounded and relatable. 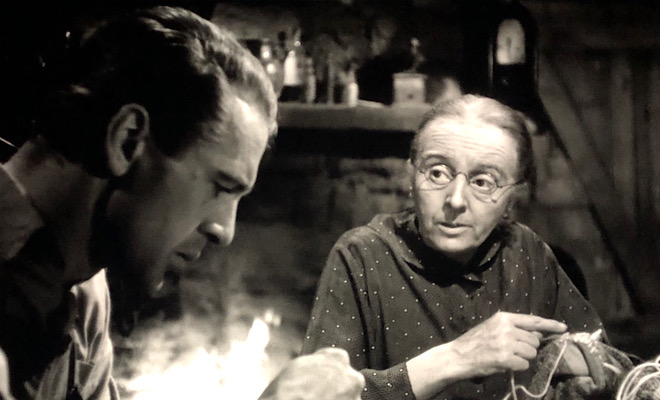 Cooper is a less-is-more actor, and though his quiet performance belies the real York's talkative nature, it perfectly suits the movie's tone and message. His line readings may lack animation, but his expressive face speaks volumes. 1941 would be a banner year for Cooper (he would re-team with Hawks for the classic screwball comedy Ball of Fire and also star in Frank Capra's socially conscious and controversial Meet John Doe) and he would cap it off by winning his first Best Actor Oscar for his portrayal of Alvin York.

In all, Sergeant York would nab 11 Academy Award nominations, including Best Picture, Best Director, Best Supporting Actor (Walter Brennan) and Actress (Margaret Wycherly), and Best Original Screenplay. Two of the film's four writers, Howard Koch and John Huston, would soon win Oscars of their own (Koch for his Casablanca script and Huston for his screenplay and direction of The Treasure of the Sierra Madre), and their fine work here paved the way for those career-defining triumphs. Sixteen-year-old Joan Leslie, who would play James Cagney's wife the following year in the George M. Cohan biopic Yankee Doodle Dandy, makes a strong impression as the spirited Gracie, and 16-year-old June Lockhart, in only her fourth film, makes the most of her small role as York's little sister.

Though Sergeant York would only win one other Oscar (for editing), it became both 1941's highest-grossing film and a major recruiting tool for the U.S. Army. Some would decry the movie's pro-war stance (it was released prior to the Japanese attack on Pearl Harbor when the U.S. was still neutral), but today its messaging seems subtle when compared to the propaganda films released after America entered World War II.

York himself rises above the fray and stands as a noble, courageous hero whose simple values and commitment to the greater good overshadow his military feats. Sergeant York remains a fervent tribute to an American original, and its inspirational message of service and selflessness is just what we need right now. 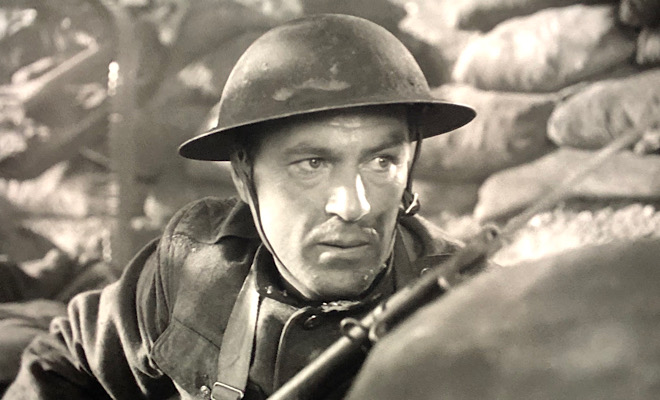 Sergeant York arrives on Blu-ray packaged in a standard case. Video codec is 1080p/AVC MPEG-4 and audio is DTS-HD Master Audio 2.0 mono. Once the disc is inserted into the player, the static menu without music immediately pops up; no previews or promos precede it.

A brand new 4K scan from the best surviving nitrate elements yields a spectacular 1080p/AVC MPEG-4 transfer that completely revitalizes this 80-year-old film. And if you don't believe me, take a gander at the restoration comparison the folks at Warner Archive produced to showcase the stunning upgrade.

Superior contrast and clarity produce a highly detailed, lush image that exudes a beautiful warm glow. Faint grain preserves the look and feel of celluloid, while lusciously inky blacks, bright whites, and wonderfully varied grays honor the Oscar-nominated cinematography of Warner workhorse Sol Polito. An array of breathtaking close-ups highlight Cooper's ruggedness and Leslie's fresh-faced, unspoiled beauty, and nary a single nick, mark, or scratch dot the pristine print. A few shots appear slightly softer or a tad harsher than others, but the instances are brief and never detract from the overall brilliance of this impeccable presentation. Once again, Warner Archive hits a home run.

The DTS-HD Master Audio 2.0 mono track supplies clear, well-modulated sound. There's a surprising amount of sonic action on the track, and both subtle nuances and powerful accents are distinctly rendered. Squeaky floor boards, shattering glass, fisticuffs, thunder, gunshots, shell explosions, and falling rain are all wonderfully crisp, and a wide dynamic scale handles all the highs and lows of Max Steiner's Oscar-nominated patriotic score without a hint of distortion. All the dialogue is well prioritized and easy to comprehend, and no age-related hiss, pops, or crackle creep into the mix. It's easy to see why Sergeant York received an Oscar nomination for Best Sound Recording, and this high-quality track does the audio proud.

All the extras from the 2006 DVD - with the exception of a Richard Schickel documentary on Gary Cooper - have been ported over to this Blu-ray release, and it's a nice selection of supplemental material.

An impressive, inspiring biopic that chronicles the life and exploits of one of America's greatest military heroes, Sergeant York honors its brave subject with humility and grace. An Oscar-winning portrayal by Gary Cooper and understated direction by Howard Hawks distinguish this classic film that brims with patriotic fervor and spiritual reverence. A dynamite remaster from the best surviving nitrate elements and excellent audio rejuvenate this 80-year-old movie, and a solid spate of supplements enhances the disc's appeal. Highly Recommended.