It took far too long, but the original theatrical edition of Dances with Wolves, at last, arrives on Blu-ray. This three-disc collector’s edition from Shout Factory! also includes the previously released extended cut and a full disc of special features, making it the definitive home video presentation of this Oscar-winning epic. Though the tale of a disillusioned U.S. army lieutenant who becomes enlightened by a Native American tribe on the fringes of the frontier remains stirring and relevant, its impact has waned over the years. Still, this complete package nicely honors a beloved film and earns a solid endorsement. Recommended.

A movie’s extended cut generally satisfies two groups of people: disgruntled directors betrayed by a ruthless studio and rabid fans desperate to see additional material. Yet no matter how good extended cuts are, they should never replace a film’s original release version...especially when that version has won a Best Picture Oscar. In essence, though, that’s what happened to Dances with Wolves. Ever since director/actor/producer Kevin Costner’s epic western bowed on Blu-ray back in 2011, the extended version, which adds a whopping 52 minutes of extra footage to an already three-hour film, has been the only version on the market.

Why? I’m not sure. Costner has claimed he wasn’t involved in producing the extended cut, so I can’t imagine he favors it over the version that won him two coveted Academy Awards. Yet whatever the reason might be for the theatrical cut‘s mysterious disappearance, Shout Factory! has at last rescued it from home video oblivion and built its new three-disc, steelbook collector’s edition around it. And that’s very good news indeed.

Based on the novel by Michael Blake, who won an Oscar for his adapted screenplay (one of seven the movie received), Dances with Wolves chronicles the personal evolution and spiritual rebirth of Lieutenant John Dunbar (Costner), who divorces one culture and embraces another just after the Civil War. Disillusioned by his war experiences and repulsed by the greed and cruelty insidiously infecting American society, Dunbar requests an isolated post on the frontier, where he can commune with nature and regain his sanity before reinforcements arrive.

Unexpected isolation, however, ensues. Dunbar handles the hardships, but when several members of a neighboring Sioux tribe threaten his domain, he strives to diffuse the tension by forging a tentative friendship. The Sioux are suspicious at first, but over time Dunbar wins both their trust and respect, ultimately gaining the nickname Dances with Wolves and growing closer to Stands with a Fist (Mary McDonnell), a white woman who was adopted by the Sioux when she was a child after the rival Pawnee tribe murdered her family. Yet all too soon, a squadron of American troops arrives and disrupts the harmony Dunbar has so carefully sowed. The sadistic soldiers can’t fathom why one of their own would reject his heritage and embrace what they believe to be a barbaric group of warriors who must be either subdued or slaughtered to make way for the great and inevitable American expansion.

Dances with Wolves captured my fancy upon its initial release in 1990, but I hadn’t seen it since. So when I recently viewed the film again it was with fresh eyes, and sadly, it didn’t inspire the same degree of affection. While I still admire Costner’s direction and appreciate his passion for the subject matter (he certainly proved wrong the vociferous naysayers who early on dubbed his project “Kevin’s Folly” and likened it to the disastrous Heaven’s Gate), the movie now feels overly self-conscious, somewhat simplistic, and a bit bloated. Yes, even the “short” version of Dances with Wolves seems too long. As the movie enters its third hour, Costner’s wooden performance and droning narration dull the senses, and no amount of majestic imagery or sympathy for the plight of doomed Native Americans can revive them.

Still, the film’s timeless message, which loudly trumpets racial and cultural acceptance and respect for traditions and heritages we don’t understand, is arguably more relevant and resonant today than it was 30 years ago. Dances with Wolves astutely shows that America has always been divided, but even as our current political, racial, and social schisms rise to levels not seen since possibly the timeframe depicted in the film, we can’t let them define us. Dunbar valiantly stands up against those divides, mending fences and building bridges, and all of us should take a leaf from his book.

Costner succeeds in making his sprawling epic both intimate and accessible, and along the way fashions some exciting action sequences and breathtaking imagery. The natural beauty of the plains radiates from almost every frame (thanks in large part to Dean Semler’s Oscar-winning cinematography) and he captures the traditions and customs of the Sioux people with quiet reverence. Despite an over-the-top climax and trite Climb Ev’ry Mountain ending, Dances with Wolves is impressive moviemaking, especially for a novice director. (The fact Costner beat out Martin Scorsese for Best Director that year and Wolves bested GoodFellas for Best Picture still sticks in my craw, but someday I might get over it.)

Dances with Wolves is a love letter to both the waning days of the American frontier and the gentle yet indomitable spirit of Native Americans, who have been criminally mistreated throughout their turbulent history. Though its bloom has faded over the past couple of decades, it’s still a powerful film, especially when looked at through a contemporary lens, and stands as one of Hollywood’s great westerns. And lucky for us, the original theatrical version is finally on Blu-ray, where it should have been all along. 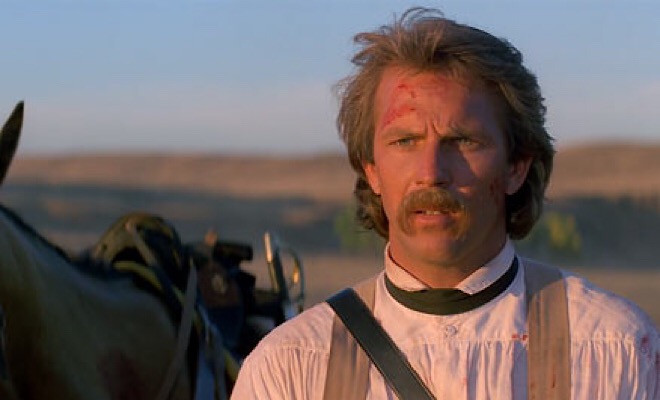 The Collector’s Edition of Dances with Wolves arrives on Blu-ray in attractive SteelBook packaging. Three discs reside inside the case - the theatrical edition Blu-ray, the extended edition Blu-ray, and a special features Blu-ray. Video codec is 1080p/AVC MPEG-4 and default audio is DTS-HD Master Audio 5.1 for the theatrical version and DTS-HD Master Audio 7.1 for the extended edition. Once the disc is inserted into the player, the static menu with music immediately pops up; no previews or promos precede it.

[Editor's Note: This review will cover the video transfer of the film’s theatrical version. For a review of the extended edition video transfer, click here.]

The 1080p/AVC MPEG-4 theatrical transfer is vibrant and natural looking, but just inconsistent enough to breed some disappointment. First, the good news. Terrific clarity and contrast bring the picture - and, most notably, the expansive landscapes - to brilliant life. Some of the razor-sharp close-ups are so dimensional and immediate, they'll take your breath away. Grain is evident, but beautifully resolved, resulting in a lovely film-like experience, and colors are appropriately lush (though the bright red blood often looks very fake).

Unfortunately, any sequence that’s shot in low light looks rough and grainy, some scenes exhibit noticeable softness, and a few stretches are littered with flecks and marks. Black levels also vary in intensity, shadow delineation is spotty, and flesh tones err a bit toward orange. None of the deficiencies are major on their own, but when added together they make an impression and detract from what should be a consistently eye-popping presentation. Dean Semler won an Oscar for his cinematography, but this transfer doesn’t always do justice to it.

[Editor's note: This review covers the audio mix of the film’s theatrical version. For a review of the extended edition audio, click here.]

The theatrical edition comes equipped with a DTS-HD Master Audio 5.1 track, as opposed to the DTS-HD MA 7.1 track that graces the extended version. I don’t have a 7.1 system, so I didn’t miss the two extra side channels, but I’m guessing even if I had them, I wouldn’t notice much difference between the two tracks. Excellent fidelity and dynamic range distinguish the 5.1 audio, which produces detailed sound that’s enhanced by superior stereo separation across the front speakers. From buzzing flies and chirping crickets to explosive gunshots, the audio glides smoothly between subtleties and bombast while bleeding seamlessly to the rears. Surround activity isn’t as pronounced as I expected it to be, but effects are noticeable here and there. Bass frequencies, however, are exceptionally strong, and nowhere are they more evident than during the thunderous buffalo stampede, which shakes the room in much the same manner that it rattles Dunbar’s ramshackle abode. It’s no wonder the film took home the Academy Award for Best Sound.

Composer John Barry also won an Oscar for his majestic score, which sounds wonderfully rich and full. All the dialogue is well prioritized and easy to comprehend, distortion is absent, and no surface noise disrupts the occasional pristine silences. Audio plays a major role in Dances with Wolves, and this fine track maximizes its impact.

All the extras from the previous home video releases of Dances with Wolves have been ported over to this new collector’s edition with the exception of the trivia track and quiz track. The two commentary tracks recorded for the film’s extended edition reside on that disc. There is no commentary track for the theatrical edition. All the other supplements are contained on Disc 3 of this set.

For complete reviews of all the special features, check out our coverage of the 20th anniversary Blu-ray here.

At last, the original theatrical edition of Dances with Wolves comes to Blu-ray, and this three-disc collector’s edition (which also includes the movie’s extended cut) is without a doubt the definitive home video version. The film remains an impressive cinematic achievement and directorial triumph for Kevin Costner, yet despite the enduring power of its message that champions tolerance, understanding, and racial harmony, this Oscar-winning epic has lost some of its luster. Bloated (even in its “short” 181-minute version) and occasionally self-indulgent, it oversimplifies sensitive issues, but its heart is in the right place and moments of brilliance distinguish it. The video transfers are good enough, but the movie cries out for a full restoration. Audio is better, a full disc of supplements examines the film from every angle, and the steelbook packaging is quite attractive. Yet aside from the theatrical cut, there’s nothing new here, so unless you really crave the original release version of Dances with Wolves, there’s no need to upgrade. On its own, though, this presentation is impressive, classy, and complete, and for those reasons it’s well worth picking up. Recommended.

Sale Price 13.99
List Price 14.99
Buy Now
3rd Party 64.95
In Stock.
See what people are saying about this story or others
See Comments in Forum
Previous Next
Pre-Orders
Tomorrow's latest releases