Adventure and excitement invade Blu-ray led by The Barbarian Brothers Peter and David Paul in Ruggero Deodato's The Barbarians. The perfect convergence of the Golan/Globus Cannon Group and Italian post-nuke/sword & sandal fantasy films, The Barbarians is high-energy entertainment. Kino Lorber and Scorpion Releasing have teamed up to bring this 1987 video store gem to Blu-ray for the first time featuring a new HD transfer, a solid audio mix, and a great audio commentary that's a treat for Cannon and genre fans. Recommended

Between the time when the oceans drank… wait that's the wrong movie. In the land of middle ear… nope not that one. A long time ago - there was a tribe of men given free rein to travel the land. When their band is attacked by the evil Kadar (Richard Lynch), their queen is taken hostage and orphaned twin brothers Kutchek and Gore are thrown into the dirt pits as slaves. The brothers grow into hulking men (Peter Paul and David Paul - it's hard to tell which is which). Their muscles are the key to reuniting their tribe, freeing their queen, and ending Kadar's terror over the land.

Growing up, Conan The Barbarian and Conan The Destroyer were my favorite movies. I'm sure I told this story in a review somewhere here before, but my local mom & pop rental shop didn't have a computer database for rentals - they would write the last name, date, phone number on the back of an index card. My name covered the cards for both films top to bottom. Before the shop closed, they gave me both tapes because those movies were the only two tapes I'd ever rent. I wanted more Conan! I rented Red Sonja believing Schwarzenegger was Conan again - which he would have been had they not lost the rights to the character. Then around when I was five or six, I started seeing posters for The Barbarians at the video store. Thoroughly convinced this was a new Conan movie - I rented it. It was not a Conan movie.

When I was a kid I was terribly disappointed, but as a grown man I dearly love this goofy movie. Italian shock horror fans will know director Ruggero Deodato from his most infamous work Cannibal Holocaust as well as other entries like Jungle Holocaust, and the halfway decent Last House on the Left meets Funny Games shocker - House on the Edge of the Park. Those expecting that same level of shocking and visceral violence and bodily mutilations will be left in the cold by The Barbarians. Fans of the 80s Italian sword and sandal craze and post-nuke sci-fi films will have a gas with The Barbarians. It has all the flair and flavor of those productions with the Cannon Group's Golan/Globus punting the cash for the endeavor. 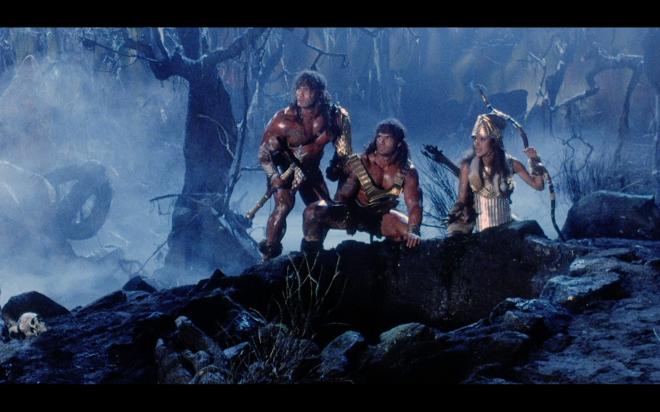 What sets this one apart from the rest of the pack is that it wasn't a cheap production. You can see that real money was spent on this show with intricate costuming and elaborate sets. There was a true effort to this one and the action sequences are well constructed - the opening chase is solid stuff for material of this sort. It's still silly as all get out, there is some very weak and contrived story structure and the characters are thin. There's a legend of a ruby or sacred gem of some kind that Kadar wants and Kutchek and Gore's tribe held - but it's such a slim part of the story that by the time the plot point comes around again it's a true "oh yeah, that thing" moment.

Bodybuilder twin brothers Peter and David Paul are clearly having a great time here. While drama may not be their strong points, they nail the comedic tones with vigor. I don't quite understand the purpose of the grunt laugh one of them makes but, hey, he made a bold choice as an actor. It's also appreciable they're not just a pair of meatheads. They pull off some impressive stunts doing a lot of physical work throughout the flick. On top of our stars, the late great Richard Lynch was always the true genuine actor's actor. It didn't matter what he was in he always brought his A-Game and he's a lot of fun as Kadar. It doesn't matter what his hair is doing in any given scene, he's there to lend his weight as the villain.

Yeah, The Barbarians is hokey as all get out. Yeah, it's a Cannon film through and through. Yeah, it's a silly adventure movie that looks like a lot of movies that came out in the 80s. But, it's also a wildly entertaining show. Whether you're laughing with it or at it, this is an entertaining movie. It's got great energy and it's competently put together with some fun action, colorful characters, cornball dialog, some interesting creature effects, and it's just a hell of a show. This is another one of those great video store gems that finally gets the Blu-ray treatment it deserves. If you're into surfing waves of nostalgia waves, this is worth the ride.

The Barbarians arrives on Blu-ray thanks to Kino Lorber and Scorpion Releasing. The disc is housed in a standard keepcase with reversible artwork. The disc loads to a static image main menu with traditional navigation options.

Sourced from a new HD master, The Barbarians arrives on 1080p with solid results. The source elements showcase a little bit of speckling and fine-hair scratches around some optical effects, but otherwise, this transfer is in great shape. Details are robust from the outset allowing you to fully appreciate the location scenery, facial features, and the costumes - especially Richard Lynch's hair. Colors are bright and bold with excellent primary pop. Reds and Blues get a lot of attention throughout most of the film, but yellows and golds get their play when the brothers are enslaved in the quarry breaking rocks. Black levels are solid overall with nice deep inky moments. There are a few instances where blacks dip a more gray color than true black, but those are few and crush isn't a problem. All around this is a pretty terrific transfer for a film that most folks will fondly remember from the VHS days.

The Barbarians arrives with a terrific DTS-HD MA 2.0 track that really opens up. Cannon was one of the firsts studios to jump on the multi-channel Dolby Stereo system and that really pumps this mix nicely. Imaging for the big action sequences like the caravan raid in the beginning or when the brothers are first forced to fight each other in the pits; there's a lot of splendid channel spacing. Dialog is clean and clear. There are a number of Italian actors who were dubbed in English and their voices can have a flat texture to them, but everyone else has a nice organic quality. Sound effects are engaging keeping the action active while the great Pino Donaggio score fills the soundscape nicely. All around a great mix.

Bonus features aren't the most robust package. Some new cast interviews would have been great to see, but what we do get is an excellent and informative Troy Howarth and Nathaniel Thompson audio commentary. These two are always a great listen - I feel like I need to have a notebook to dash down the other films they reference, but they pull so much info about the production and the cast it's a fun engaging conversation.

One of the biggest and arguably one of the best Cannon Group films of the 80s, The Barbarians starring The Barbarian Brothers finally arrives on Blu-ray. This is a great action/adventure/fantasy flick with a lot of energy and a sparring cast delivering their best stuff. Director Ruggero Deodato may be a bit removed from some of his more infamous cannibal films, but he has an eye for action and keeps the film moving.

Kino Lorber and Scorpion Releasing have teamed up to bring this video store gem to Blu-ray with great results. With a new HD transfer and a solid audio mix, fans can enjoy a great commentary track when they're done with the main show. If you love 80s movies, if you love Cannon Group movies - this is an essential piece of the collection come home. Recommended.