It's all just a game - and one that constantly plays with the audience's expectations. Michael Haneke's controversial 1997 film Funny Games arrives on Blu-ray courtesy of The Criterion Collection. The film is just as chilling and maddening as ever as its central villains constantly torment a well-to-do family as well as the audience. It's a hell of a film and while it would have been nice to have the 2007 remake to "complete" the experience, this set offers a decent if slightly problematic video transfer, immersive engaging audio, and some new bonus features. Recommended.

Anna (Susanne Lothar), Georg (Ulrich Mühe), their son Georgie (Stefan Clapczynski) and their dog Rolfi travel to their Austrian lake home for a little R&R. They were supposed to spend some time sailing and feasting with their neighbors, but instead, they were introduced to two young men, Paul (Arno Frisch) and Peter (Frank Giering). Curiously both boys wear simple crisp white tennis outfits with white gloves, but they seem respectable and friendly - until their game begins. What starts as a polite annoyance turns violent and deadly as Paul and Peter make a bet that Anna, Georg, and Georgie will all be dead by 9:00 A.M. the following morning. 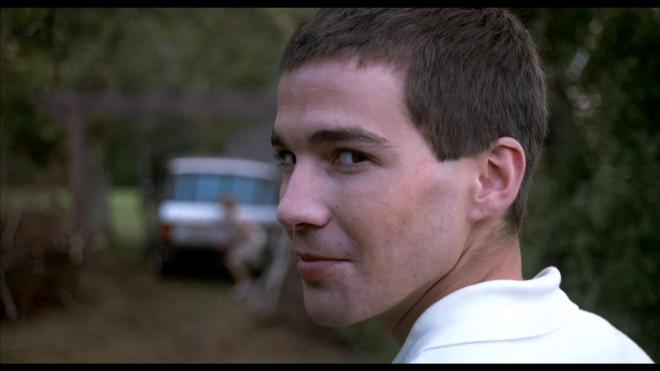 Funny Games isn't a traditional thriller nor is it a straight-up horror movie. It's a commentary piece about the violence in media and entertainment that works within the confines of the two genres. Writer/Director Michael Haneke doesn't stop the movie to frequently pontificate about the state of mass entertainment. His characters don't state and restate the theme to hammer the audience over the head with a message. Instead, he plays with viewers expectations. He takes two classic film genres and turns them on their heads. Just when the viewers are about to be treated to the terrific moment of release that allows the good to vanquish evil, the film snatches it away like a constant cruel joke. You have to sit there and endure it - like the heartbreaking 10-minute single take shot that leaves you emotionally wrecked.

But that's where the commentary comes from. Instead of being some sort of moralistic preach-fest, the film plays with the audience's need for violent release in a film steeped in violence. Funny Games smartly forces you to think about why you want someone to hurt another person. In the case of a Horror movie or a Thriller, you want the classic final girl to find a way to get the advantage and off the killer in a gloriously violent way that is more graphic than anything we've seen throughout the rest of the movie - but it's okay because it's the "good guy" killing the "bad guy."

I would argue this is why Funny Games is the perfect thriller. You're rooting for nice likable people you've spent some time with to survive and escape. You desperately want them to find a way to overcome Paul and Peter - even though deep down they're not likely to come out on top. That's where this film is so wonderfully entertainingly frustrating. It plays with what you expect and wants from a movie of this type but it's got a game to play and the audience is an incapable participant. There's nothing we can do to stop them - they are in complete control.

20 years since this film prompted walkouts and some measure of outrage at the Cannes Film Festival, Funny Games still has the vital punch. However, the film is oddly bookended by its own Americanized shot-for-shot remake directed again by Haneke. While this isn't the first time a director has made his own movie twice in different languages, the remake just doesn't have the same legs as this original. Even with the great cast of the remake, there's just something uninspired about it that makes it even more unnecessary than the average remake.

It had been some time since I'd seen either this original version or the 2007 remake. I'd like to say that it was "nice" to revisit this one again, but "nice" isn't a term that should ever be applied to a movie like Funny Games. This is a gleefully mean and nasty movie that cruelly plays with the audience as much as it does the poor family in the film. If you've already seen it, try watching it with someone who hasn't gotten to watch it before. For this review, I viewed it with my wife and it was interesting to watch her reactions. It's a hell of a visceral experience with a biting cinematic commentary making it the perfect addition to The Criterion Collection.

Funny Games arrives on Blu-ray courtesy of The Criterion Collection in a single disc set. Pressed on a Region A BD-50 disc, the disc is housed in a standard clear case with the spine number 975. Also included is a booklet containing the essay "Don't You Want To See How It Ends?" by Bilge Ebiri that offers terrific insight into the movie's production and legacy. The disc loads to a static image main menu with Criterion's standard menu structure. 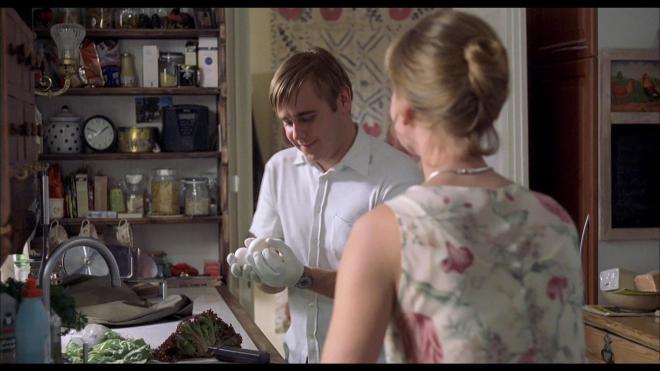 Sourced from a new 2K restoration overseen by Haneke, the results are often impressive - with some notable caveats. The last time I saw this original version of the film was in school when it was projected from a DVD, and obviously this 1.85:1 1080p transfer offers a notable improvement. Early on, details are impressive giving you a full appreciation of the actor's faces who are often shot in close-up. The overhead footage of the family driving to their lake house is equally impressive with lush details in the trees and mountains. Film grain is apparent but stable without ever looking too out of place or unnatural. There are a couple of close up shots that appear to have been optically zoomed in as the grain looks a bit "larger" but again, not distracting.

Now, this is where my frustrations come in. There appears to be some edge enhancement applied as there are several shots that just appear incredibly crunchy with some ringing. The opening titles hit is a notable "whoa!" example of where the edge enhancement can smack the screen out of nowhere. Additionally, there appears to be a bit of DNR applied during a few sequences as some fine facial features and small details in some shots just appear waxy and nondescript when they looked fine just moments ago. I never saw the French Blu-ray release so I can't square a complete comparison, but the DNR, as well as the edge enhancement, appear to have been judiciously applied. Some sequences look straight fantastic - others not so much. But these anomalies are far from being a complete travesty as most of the time you don't notice any artifacts. But when you do see them - they stand out.

On the plus side of things, colors are robust and vivid. The film opens looking beautiful with a full range of deep forest greens and bright primaries. Flesh tones are healthy. Then the movie moves into darker thematic territories the color scheme follows. Much of the film is bathed in shadows with minimal light giving Susanne Lothar and Ulrich Mühe sickly pasty coloring. Whites are often brilliant and crisp without ever blooming. There are several sequences with bright sunlight streaming through windows but never becomes too glaring. At the end of the day, Haneke was the one who approved this transfer. Some moments look absolutely brilliant, others are more problematic. When it looks great it's practically a 5/5 when it's not as sharp - it's a 3/5. 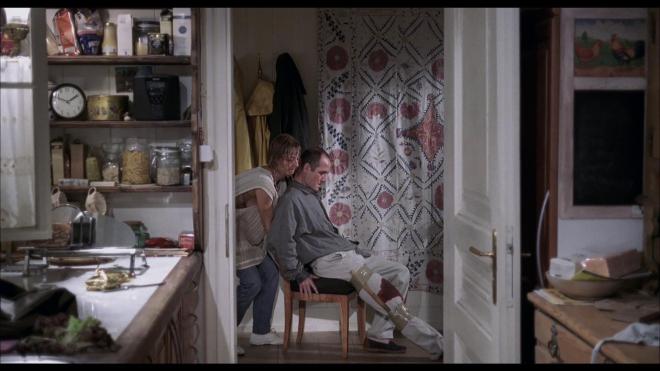 For a film that primarily takes place in a single location, the film gets a lot of range out of its German DTS-HD MA 5.1 mix with English subtitles. Dialogue is crisp and clear throughout. Even when people are speaking in whispers or from another room, everything is audible without interference from other elements. The film plays with silence quite a bit so small sound effects like a ticking clock or someone doing something in another room build the soundscape. In the silence, there is some great atmosphere and spatial awareness. With that, this isn't an overly aggressive surround mix. Most of the activity keeps to the front/center channels leaving the sides and rear to fill the void with incidental sounds. All around its a moody and effective mix. 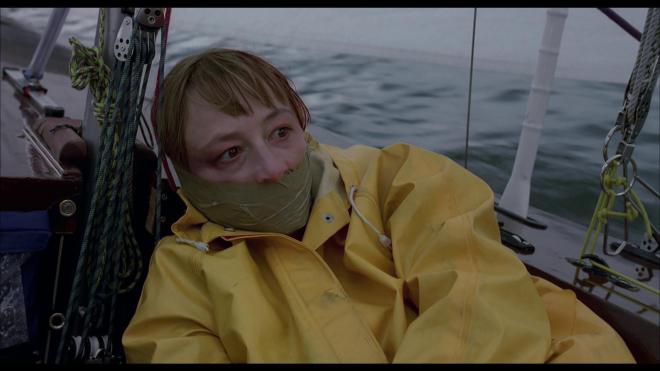 Like a number of Criterion releases, it's not the quantity but the quality that counts most. We're getting about two hours worth of bonus material here which isn't a lot but what's here is great stuff. The Haneke interview is particularly enlightening as he discusses the genesis of the film and his intentions. The Arno Frisch interview is equally interesting as he more or less grew up working in Haneke's films and did Funny Games just after high school. 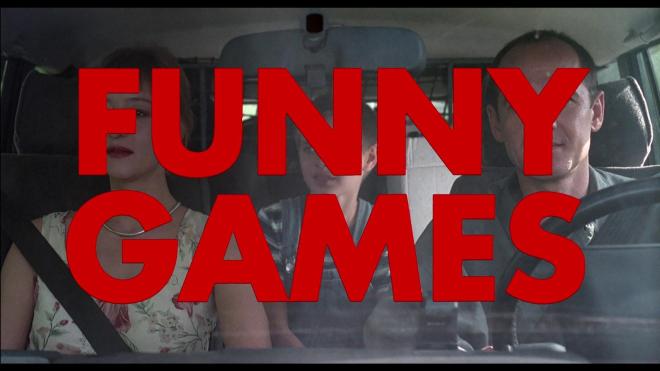 Funny Games isn't an easy movie. It's rough stuff. It forces you to watch and endure the violent torture of an innocent family without the traditional release that so many thrillers or horror films offer the audience. It's exciting, thrilling, and frustrating all at the same time. It's certainly not a movie for everyone, but it's one everyone should see - if for no other reason than to understand how genre films play with and exploit your expectations.

The Criterion Channel plays Funny Games on Blu-ray with a video transfer featuring that features some incredible highlights but undermined by some apparent smoothing and edge enhancement. Thankfully the 5.1 mix delivers the goods. Toss in an informative collection of bonus features and this is a decent set. It's a hell of a film and while it would have been nice to have the 2007 remake to "complete" the experience, this is still a worthwhile release and worth adding to the collection for the film alone. Recommended.

Sale Price 21.59
List Price 39.95
Buy Now
3rd Party 14.95
In Stock.
See what people are saying about this story or others
See Comments in Forum
Previous Next
Pre-Orders
Tomorrow's latest releases