The moon is high in the sky and love is in the air in Moonstruck. Cher stars in her Oscar-winning role as a woman unlucky in love after her first husband was hit by a bus. Now years later she's about to get married again but accidentally falls for the groom-to-be's younger brother played by Nicolas Cage. Norman Jewison directs this classic 1987 romantic comedy from an Oscar-winning screenplay by John Patrick Shanley and 33 years later is just as delightful, hilarious, and charming as ever. The Criterion Collection gives this film a second chance at love on Blu-ray with an excellent new transfer and a host of new and archival bonus features. For the romantic hearts out there this is a Must Own

"Do you love him Loretta?"

"Good. When you love 'em they drive you crazy."

Believing she is cursed in love after her first marriage ended in tragedy, Loretta Castorini (Cher) plays life safe and boring as a bookkeeper for local Brooklyn businesses while dodging any new romantic commitment. When her safe boyfriend Johnny Cammareri (the late great Dany Aiello) suddenly asks her to marry him, Loretta has a chance to do it right. As Johnny travels to Sicily to be at his mother's deathbed, he tasks Loretta with inviting his estranged brother Ronny (Nicolas Cage) to the wedding and help burry the bad blood between them. When Loretta and Ronny meet, things don't quite go to plan and as the big moon rises over New York, passion, love, and the refreshed feeling of being alive gets the better of them.

Norman Jewison is one of the most adept and prolific directors of his generation. Starting his career behind the camera directing television in the 1950s, Jewison quickly found a home on the big screen ably handling a variety of genres with ease. He could tackle the hilarious comedy The Russians Are Coming the Russians Are Coming. The searing racial thriller In the Heat of the Night. The iconic heartfelt musical Fiddler on the Roof. The politically-charged sci-fi actioner Rollerball. The charged judicial drama And Justice For All. While each of these movies is vastly different from one another in terms of scale, genre, and theme - they're all populated with rich fully-drawn characters you can easily hang your hat on and sympathize with. And then we have what I believe to be the perfect romance film Moonstruck which fits perfectly in Jewison's oeuvre.

When you fall in love - and I mean really fall in love it's such an intoxicating feeling you forget everything and anyone around you. When I met my wife and went on our first date, I forgot to go home for two days! We were out together so long I had to go to work and then after work, I just wanted to see her again… then I had to go to work again. Thankfully there was a Walgreens right next to the store I worked at in Chicago at the time so I could get some supplies to freshen up - but I didn't care I hadn't slept for most of three days. The energy and feeling of being excited and alive kept me going. Watching Moonstruck and the moment when Loretta and Ronny fall for each other perfectly captures that irrational madness. 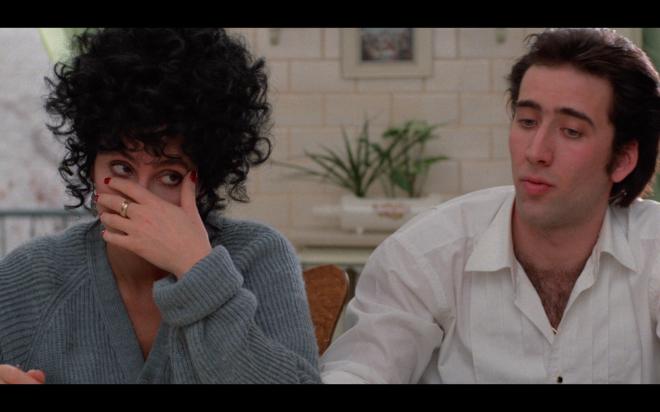 But this isn't just about young love and the early excitement of that life - it also celebrates love through the ages. People can grow together like Loretta's Aunt Rita (Julie Bovasso) and Uncle Raymond (Louis Guss) and still maintain that youthful vigor to their romance. Or, they can grow apart like Loretta's parents Cosmo and Rose (Vincent Gardenia and Olympia Dukakis returning to the screen together after Death Wish). You don't really know what is separating them; why Cosmo feels the need to stray and see what's out there, but you hope for the best for them.

Bringing all of this together is one of the very best-written screenplays by John Patrick Shanley (Joe Versus the Volcano / Doubt). In school, we did a screenwriting breakdown of the very best and worst scripts, and Moonstruck was high on our list. Nothing is wasted, nothing is taken for granted. It's a simple concept that keeps things localized within a small tightly-knit community. It takes place in New York, the city is a big part of the film's essence, but it isn't strictly about the Big Apple city. Every character of the film is thoroughly drawn that a simple couple lines is all you need to know everything about them. There's good reason this screenplay won an Oscar and helped Cher and Olympia Dukakis won their respective Oscars with Vincent Gardenia earning a much-deserved nomination.

As I mentioned above this is a favorite. Not just because I find it richly entertaining, but because it always pulls the heartstrings, tickles the funny bone, and swirls around your emotions. I get the same feelings every time I see this movie - after several dozen viewings I obviously know what's going to happen but I always get excited as the plot unfolds and our various characters fall in love - or back in love with one another. It's charming, romantic, and damn funny. For myself, that's the mark of a genuine classic. Over thirty years later this movie still has a lot of magic to offer fans and newcomers alike.

Moonstruck gets a second lease on Blu-ray thanks to the Criterion Collection. Pressed on a BD-50 Region A disc, the disc is housed in Criterion's standard clear case with spine number 1056. Inside includes a foldout booklet with an excellent essay by critic Emily VanDerWerf discussing the film's many themes. The disc loads to a static image main menu with Criterion's traditional navigation structure. 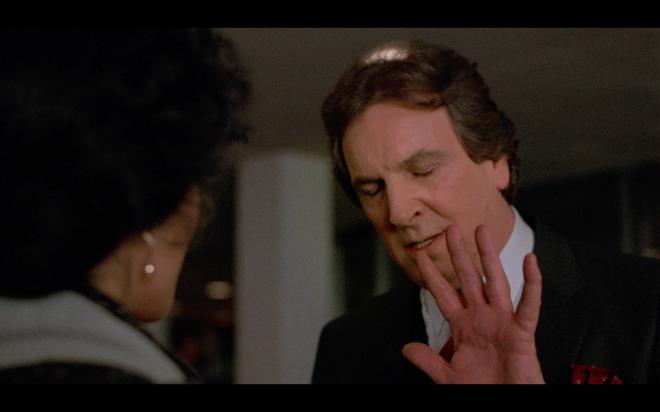 When Fox/MGM dropped Moonstruck to Blu-ray in 2011 it wasn't bad! Certainly aged and not a recent restoration, but clearly better than the old DVD. 9 years on from that release, like Cher,  the film earns a well-deserved makeover with a fresh new 4K restoration. While the differences aren't necessarily vast - because again, that 2011 disc was pretty good - they are notable. First is the cleanliness of this master. The 2011 disc's source had a lot of speckling, tiny scratches, and even some stains that would pop up from time to time. Not huge issues necessarily but once you start seeing them you can't stop noticing them.

Details also gain a few extra subtle pickups - small details in skin texture, clothing, the production design of the Castorini family home all pick up some extra clarity. The family kitchen is a moment where it feels like a lot of extra fine touches come through. Film grain has a finer texture to it creating a natural organic presence. Colors also get a little extra refinement giving primaries a little extra pop. The undertaker's blue tie is one of these subtle differences where it feels like you can now actually see that butter stain Loretta points out as he drones on about his genius.

The next welcome improvement I spotted was contrast and black levels. The 2011 disc had pretty muted whites - the difference in the white shirts of the waiters at the restaurant was immediately noticeable. As such skin tones are much more natural, I felt like Cher's natural olive-tone was more apparent throughout in various lighting conditions.

Black levels are also stronger here giving the image a more natural three-dimensional presence. There are still several segments around the Met Opera and afterwards where everyone is all in black that gets a bit close to crush, but this restoration offers enough improvements that black-on-black clothing and shadows don't completely disappear into each other. I've watched this movie countless times now and this is easily the best I've seen it look, I wouldn't mind a true 4K UHD Blu-ray release someday - but for now this is pretty damn terrific and worthy of an upgrade. 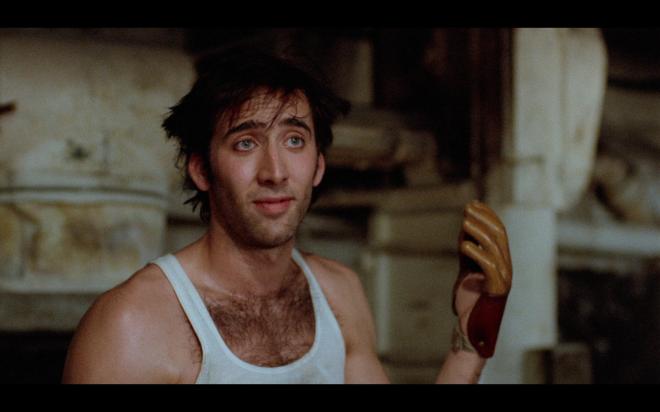 This release of Moonstruck comes with a DTS-HD MA 5.1 mix that sounds pretty much identical to the 2011 track. While there is some welcome surround presence for street sequences, restaurants, or Ronny's basement bakery kitchen - if there's been any restoration or if this is in fact a new track - it's still very front/center heavy. Dialog and principal sound effects pretty much dominate those channels with only a few moments of expansion. With that when a scene calls for a lot of musical presence - La Bohème or Dick Hyman's score for Cosmo's Moon - the mix really opens up and it feels like all of the channels are fully employed. As a charming romance film, there just isn't much call for a big robust surround mix, but when and where it counts this mix delivers. The dialog is clear throughout and the mix is clean without any issues to contend with. 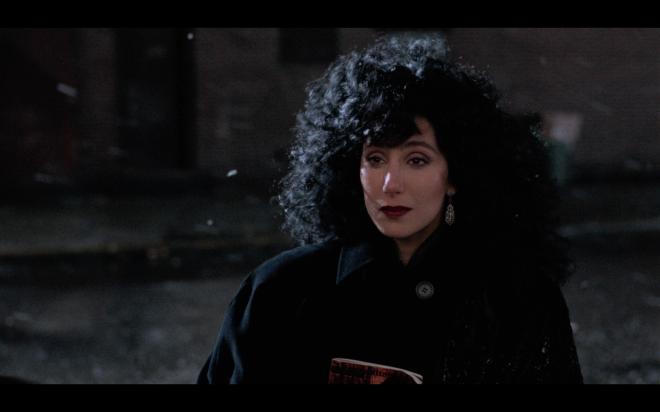 In true Criterion Collection form, fans of the film are treated to a wide assortment of new and archival bonus features. The fist and easily best is the original Audio Commentary from 1998 featuring Norman Jewison, Cher, and John Patrick Shanley. It's easily one of the best commentaries recorded as the trio offers a massive amount of information about the movie, how it got made, casting, and the film's original ending that was never shot. The Cher introduction hosted by Leonard Maltin for AFI's Night at the movies in 2013 is pretty fantastic. The new interview with John Patrick Shanley is also a welcome addition as he discusses his time growing up in New York as well as working as a playwright and then screenwriter. There are hours of great material here and if you're a fan you'll have a great time picking through it.

Moonstruck is a modern classic - plain and simple. Over thirty years after its theatrical release, this film is still enchanting audiences young and old with its romantic whimsy. This is a perfect example of all the right elements coming together to create a terrific film. You have a legendary director, an amazing young playwright writing his first screenplay, an iconic leading lady, a young upcoming male lead, and a delightful supporting cast. Moonstruck is the perfect romance film. The Criterion Collection gives Moonstruck the care and attention a classic deserves with a full fresh restoration, great audio, and a terrific assortment of new and archival bonus features to pick through. It's a delightful film that deserves a spot on your shelf. Must Own.