In the Heat of the Night - Criterion Collection

Race remains an incendiary issue and more than 50 years after it was first released In the Heat of the Night remains all too relevant. Norman Jewison’s powerful Oscar-winning film tries to pass itself off as a murder mystery, but its searing portrait of bigotry and hopeful outlook for a harmonious future are what we remember. Sidney Poitier and Rod Steiger memorably clash in this tightly constructed tale, and Criterion’s Blu-ray presentation heightens its impact with a new mastered-in-4K transfer, solid audio, and a substantial extras package. Highly Recommended.

"They call me Mister Tibbs!" stands as one of cinema's most memorable and passionately delivered lines. Yet the power of that immortal retort stems not just from a disrespected character's indignation over racial bigotry. Back in 1967, the words also struck a raw nerve in people all across the country and reflected the ever-strengthening winds of social change. Blacks rarely confronted Southern whites, but the Civil Rights Movement began breaking down barriers, and In the Heat of the Night, a searing indictment of prejudice disguised as a murder mystery, sought to prove achieving common ground was possible and racial harmony might not be such a far-fetched idea after all. Norman Jewison's Oscar-winning film signaled an evolution in U.S. race relations, as blacks began to forcefully assert themselves and stand up to domineering whites who diminished their worth and stole their dignity.

When I reviewed the first Blu-ray edition of In the Heat of the Night five years ago, I waxed poetic about how far we had come as a nation since 1967 and how that progress “significantly diminished” the visceral impact of In the Heat of the Night. Well, sitting here in early 2019, I’m not so sure those words are still true, or if they were ever true at all. Recent events and changing tides have sadly inflamed racial rhetoric and broadened divides, and as a result, Jewison’s film is arguably as relevant and powerful today as it was a half century ago.

In a way, I wish it wasn’t. I wish I could categorize In the Heat of the Night as an antiquated period piece or devastating reminder of a shameful period in our social history. Of course we’ve come a long way since 1967, but we’ve never quite come far enough. As I wrote in 2014, “this engrossing, meticulously constructed production still strikes a chord, because race remains a hot-button issue.” Well, that button is only getting hotter these days.

Perhaps because of its topicality - or maybe in spite of it - In the Heat of the Night won the Academy Award for Best Picture in 1967. Racial tensions ran so high during that turbulent period, the movie's star, Sidney Poitier, probably the most renowned African-American in the U.S. after Martin Luther King Jr., refused to shoot the picture on location in Mississippi, for no other reason than it was too dangerous. (Illinois was used instead, although Poitier did reluctantly agree to shoot briefly in Tennessee, so a critical cotton-picking scene could be authentically filmed. Reportedly, he slept with a pistol under his pillow.) Almost from the get-go, Stirling Silliphant's Oscar-winning screenplay depicts that uneasy atmosphere in the fictional community of Sparta, Mississippi, where blacks are under relentless suspicion and dutifully live as marginalized, invisible second-class citizens who fear their white superiors will unfairly target and bully them.

Virgil Tibbs (Poitier) knows this world well. Though he's a proud, successful, intelligent, and self-assured man, he's aware of the rules and keeps his head down. But after a local businessman is found dead in the street, an overzealous police officer (Warren Oates) discovers Tibbs patiently waiting for a train at the local depot, and, without any evidence other than the color of his skin, accuses him of the crime. When he's brought before the new town sheriff, Bill Gillespie (Rod Steiger), a blustery, gum-chewing bigot who runs his force with an iron hand, Tibbs reveals to everyone's surprise that he's a northerner and - get this - a Philadelphia police detective who was just innocently changing trains at the Sparta station.

After his identity is confirmed, Tibbs, who's also conveniently a homicide expert, is commanded by his Pennsylvania bosses to remain in Sparta and assist in solving the whodunit, much to Gillespie's chagrin. Working with a loud-mouthed, hot-headed, and unapologetically bigoted police chief is distasteful to Tibbs, and Gillespie can barely stomach taking directives from a black "boy" whom he knows is smarter, more polished, and more skilled than he. Yet this odd couple forms a tenuous partnership fraught with periodic head-butting, and as they become more intimately involved, each earns the other's grudging respect.

Though the murder mystery plot (which I found too preciously constructed and mechanically executed) drives In the Heat of the Night, its success hinges on the incendiary chemistry between Poitier and Steiger. The two actors often spar like heavyweight fighters, circling each other in the ring, then pouncing when one lets down his guard. They make quite a pair, but surprisingly their finest scene together isn't the classic “Mr. Tibbs” exchange, but rather an intimate, low-key discussion about loneliness, family, and dedication to a thankless job. Steiger won a Best Actor Oscar for his riveting, no-holds-barred portrayal, yet while he's always fun to watch, too often bombastic histrionics overshadow his performance. Poitier is more restrained, though at times it seems as if the mantle of "America's foremost black actor" weighs him down and lends his work a slight affectation.

Aside from the "Mister Tibbs" line, Poitier's most memorable and influential moment occurs when he's summarily slapped by an uppity white business magnate during a casual interrogation. Without missing a beat, Tibbs retaliates in kind, striking the man across the face with double the force and sending a message not just to the character, but also to the audience at large that African-Americans aren't going to be pushed around, condescended to, or abused by whites or anyone else anymore. Black Power may not have been born at that particular instant, but TIbbs’ knee-jerk reaction made a bold statement that resonated among an oppressed race that clamored for equality.

In the Heat of the Night surely won the Best Picture Oscar because of its powerful message and forceful presentation. Movies like The Graduate and Bonnie and Clyde may exude more artistry, but their themes pale in comparison. For once, substance trumped style, and because this fine film refused to pull any punches in 1967, it's still able to pummel audiences today. 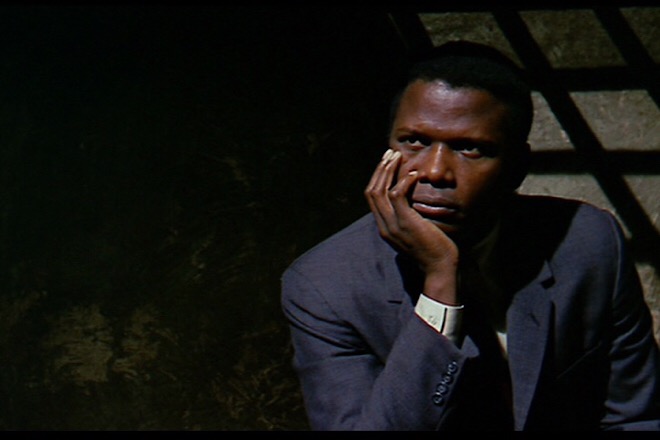 The Criterion edition of In the Heat of the Night arrives on Blu-ray packaged in a standard Criterion case. A 12-page fold-out booklet featuring an essay by film critic K. Austin Collins, a cast and crew listings, transfer notes, and several illustrations is tucked inside the front cover. Video codec is 1080p/AVC MPEG-4 and audio is LPCM mono. Once the disc is inserted into the player, the static menu with music immediately pops up; no previews or promos precede it.

Criterion supplies a brand new transfer of In the Heat of the Night that was “created in 4K resolution...from the 35 mm original camera negative.” Almost instantly, it’s evident this rendering outclasses the previous Fox Blu-ray, with greater clarity and more vivid color distinguishing the presentation. Grain might be a tad more evident here, but it lends the picture a natural, filmic look that also reflects the story’s gritty shadings. Razor sharp close-ups highlight the beads of sweat, hair follicles, and skin blemishes on the characters’ faces, and rich black levels, solid shadow delineation, and true flesh tones enhance the image, too.

Noticeably brighter and deeper hues heighten the movie’s immediacy, background elements are easy to discern, and no nicks or marks dot the source material. A bit of crush creeps in now and then and some of the dark shots look overly grainy, but neither of those issues diminish the quality on display. While the previous transfer was very good, this Criterion presentation raises the bar. If you’re a fan of the film, you’d be wise to upgrade.

The previous Blu-ray edition of In the Heat of the Night only included a newly minted DTS-HD Master Audio 5.1 track that provided plenty of front channel stereo separation, but not much in the way of surround effects. This Criterion release chucks that track in favor of the movie’s original monaural audio, presented here in lossless LPCM. According to the liner notes, the track was “restored from the 35 mm magnetic DME track,” and the results are quite good. The sound of crunching leaves, chirping crickets, footsteps against sidewalks, and car wheels rolling across gravel are all crisp and distinct, a wide dynamic scale handles all the highs and lows of Quincy Jones’ music score without a hint of distortion, and all the dialogue - despite some challenging accents - is clear and easy to comprehend. No age-related hiss, pops, or crackle afflict the track either. In the Heat of the Night won the Oscar for Best Sound, and this faithful rendering shows us why.

With the exception of one short featurette, Criterion imports all the extras from the previous Blu-ray edition of In the Heat of the Night, while adding some wonderful new supplements that shed additional light on this important film.

In the Heat of the Night still packs plenty of heat more than 50 years later, and though it’s upsetting acute racial tensions still permeate our society, director Norman Jewison’s Oscar-winning film indicts bigotry and gives us hope that harmony is possible. Preachy speeches are wisely kept to a minimum, but the fireworks between stars Sidney Poitier and Rod Steiger are palpable and riveting. Criterion’s Blu-ray presentation improves upon the previous Fox release with a new mastered-in-4K transfer, some new extras (almost all of the old ones are here, too), and solid lossless audio. Changing times have sharpened the sting of In the Heat of the Night, making it relevant and resonant once more. The power this excellent movie still wields today cannot be overstated. Highly Recommended.