Better Call Saul Season Five follows Jimmy McGill's full transition into Saul Goodman as he is caught in between his own new business venture, the cartel, Gus Fring, and his girlfriend Kim Wexler. This is the penultimate season before everything comes to a tipping point for its final sixth season which is sure to lead up to Walter White and Jesse Pinkman. This Blu-ray set comes with remarkable video and audio presentations and some truly amazing bonus features. Highly Recommended! 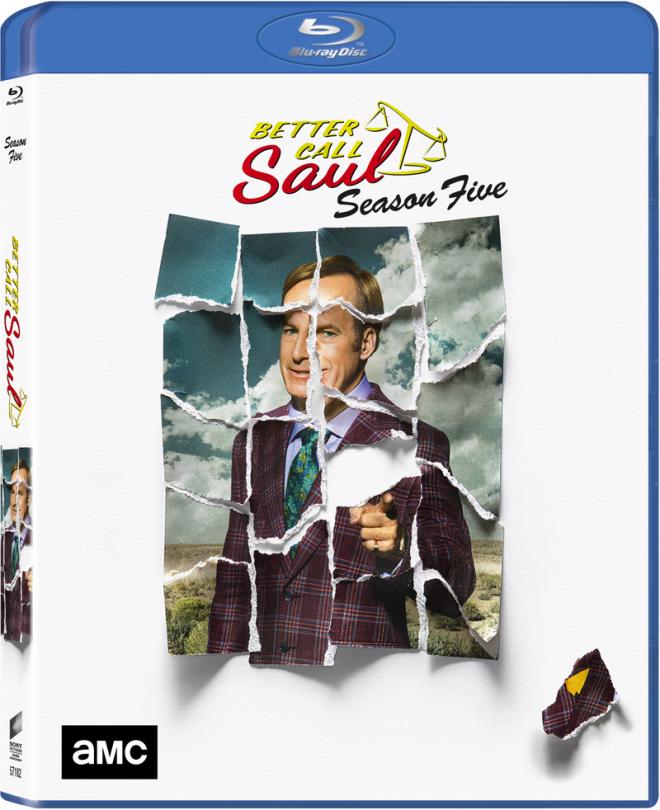 Jimmy McGill has finally chosen to hit the ground running as his fast-talking criminal lawyer Saul Goodman in the penultimate season 5 of Better Call Saul from Breaking Bad creator Vince Gilligan. Seasons 1-4 showcased his earlier days as a practicing attorney who struggled with his off-kilter ideas and practices, but with season five, McGill has fully accepted and taken to Saul Goodman as in the first few minutes of the show - he changes his name to the titular Albuquerque icon. The stakes are at an all-time high for each character this season as everyone's fate comes to a fetching climax of truly suspenseful proportions and is the best season yet of the show.

The fifth season picks up right where season 4 left off and takes place four years before Saul crossed paths with Walter White and Jesse Pinkman for the first time. A few new familiar faces from Breaking Bad show up as Gus Fring's ongoing silent war with the cartel starts to unravel with the arrival of Lalo Salamanca, a vicious enforcer for the Salamanca family. Jimmy, now referring to himself as Saul is hitting the pavement by giving new mobile phones to people on the street, telling them to speed dial him if they need a lawyer, which jump-starts his new career. Meanwhile, Kim Wexler (the incredible Rhea Seehorn), struggles with Jimmy's new path as she gets involved with his schemes that fall into dangerous territory that prompts them to make some quick life-altering decisions.

Nacho Varga is playing both sides to keep his father alive and sides with Gus in bring the cartel down as they all trick and weave in and out of the shadows of law enforcement. Mike Ehrmantraut (Jonathan Banks) is still working for Gus on and off but is spiraling out of control with his anger towards everyone, including his niece as he hasn't dealt with the guilt associated with his past. It all comes to a head in the final couple of episodes of the season that are extremely violent, chaotic, and full of rich character arcs and development that will lead the way into the final 13-episode sixth season.

Better Call Saul is so expertly told and played out that it has quickly become one of the best tv series to ever be released and may in fact be better than Breaking Bad itself which is no easy feat. The nuanced characters and attention to detail are impeccable here, along with telling brand new stories and showing new sides to already established and invested characters. Perhaps the spotlight of the season goes to Rhea Seehorn though as her role in this show has just gotten better and even more layered.

In this season, Kim has to deal with her own personal demons, Jimmy's turn to Saul and her willingness to go along with it, as well as keeping her Mesa Verde clients happy while not getting murdered by the cartel. It's a lot to take on and she does it perfectly with a ferocity and grace-like quality both at the same time. She's perhaps the one character everyone wants to know about in the end, since she is not mentioned or talked about in any Breaking Bad episode, but is the main player here so close to both worlds colliding. Better Call Saul season five is without a doubt the best season of the show yet and rallies to set up the next thirteen episodes that will conclude this astonishing series and its characters.

Better Call Saul Season Five comes with three 50GB Blu-ray Discs from Sony. All of the extras are spread across all three discs. There is an insert for the digital download code too. The discs are housed in a hard, blue plastic case with a cardboard sleeve. The reverse side of the inner sleeve box art reveals the details and synopsis of each episode. 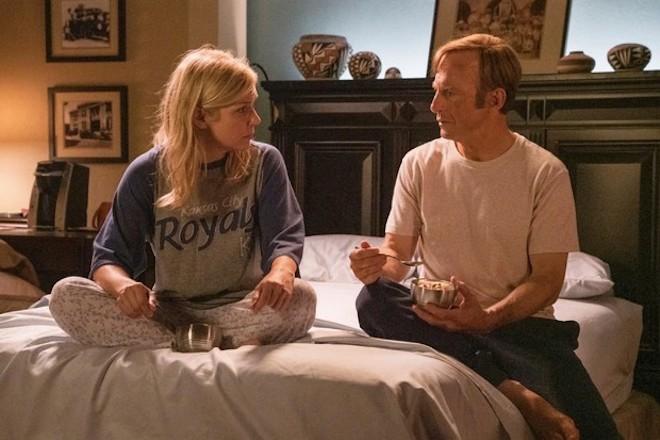 Better Call Saul Season Five comes with a 1080p HD transfer in a 1.78:1 aspect ratio and looks just as wonderful as the last few seasons. The color palette is vibrant and full of life set in the New Mexico dessert-like city of Albuquerque with bright blue skies, brown and orange dirt mixed in with some fantastic green bushes and trees. This contrasts perfectly with the colorful wardrobe that Jimmy and Nacho wear throughout the season. The black and white sequence at the beginning of the 1st episode looks pitch-perfect as well.

Black levels are deep and inky with zero crush, which comes into play in the last episode when Lalo is escaping the assassins at night time. This still gives way to excellent detail as well. The detail is sharp and vivid, revealing facial pores, individual hairs, makeup effects of wounds, cuts, bruises, and gunshots as well. Wider shots never go soft either. Skin tones are always natural and there are never any video issues with banding, aliasing, or video noise. 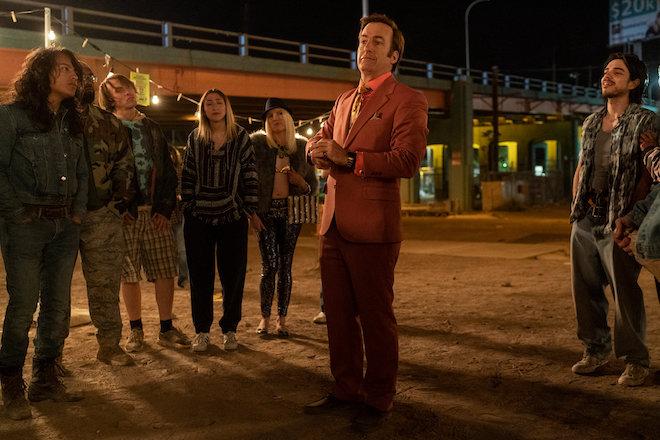 This release comes with a lossless DTS-HD MA 5.1 audio track that is a delight to listen to. Sound effects are flawless and loud at all times. Gunshots pack a powerful punch with the right amount of bass, explosions are extraordinarily dynamic and boisterous that will cause a great rumble, and vehicles revving up and driving fast sound amazing. The other dialogue-driven moments have wonderful directionality and create a specific ambiance whether the main characters are in a courtroom, a restaurant, or even a bus station - it all sounds perfect.

There's a big shootout scene in the desert at one point, to which the use of surround speakers is fully utilized with bullets whizzy by seamlessly through each speaker. It's an immersive experience for sure. The amazing soundtrack of songs and score always adds to the suspense and dark comedy of the show and the dialogue is always clean, free of any audio problems. 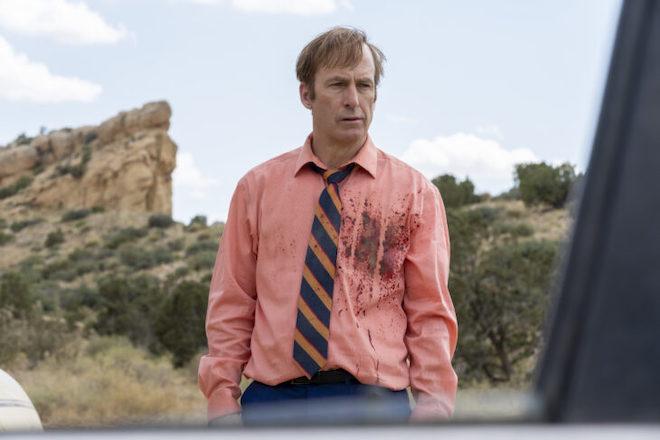 There are about 111 minutes of bonus material located on the three discs, with additional commentary tracks on each episode from the cast and crew. There are a ton of fun extras that are informative and funny here. 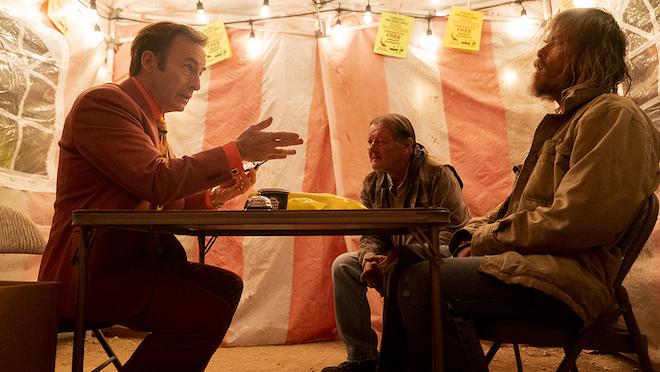 Better Call Saul Season Five is the best season yet of the show and is one of the finer exhibits of television ever to be aired. The complex characters, adrenaline-inducing storytelling, and fantastic use of music all culminate into some of the best scenes this cinematic universe has ever seen. With a great 1080p HD transfer, a wonderful DTS-HD 5.1 audio mix, and some excellent worth-while extras, this Blu-ray set is HIGHLY RECOMMENDED!