Better Call Saul is only getting better with each season as it slowly bridges the gap between itself and Breaking Bad. In Season Four, Jimmy McGill scams for work while he is barred from practicing law. And, Gus Fring and Mike Ehrmantraut are planning and building the infamous underground meth lab. It's fantastic. The series comes with an excellent 1080p HD transfer along with an amazing lossless DTS-HD MA 5.1 audio mix and a treasure trove of bonus features. HIGHLY RECOMMENDED!

As season four of Better Call Saul cooks itself perfectly, we are slowly journeying forward to intersect with the events of Breaking Bad. This prequel series focuses on the quick-witted and crime-addicted lawyer, Jimmy S'all good, man McGill (Bob Odenkirk), showing us the decisions and actions of that will eventually lead him into meeting Walter White and Jesse Pinkman. It's a fantastic story to watch unfold, given what we know.

In Season 4, Mike Ehrmantraut (Jonathan Banks) works with Jimmy, the cartel, and Gus Fring (Giancarlo Esposito). It's fantastic to watch these nuanced and amazing performances in these early storylines. We still see the super friendly Gus at Los Pollos Hermanos greet customers and employees, but also see his cold, calculating strategy skills in killing and building the underground drug lab we know from Breaking Bad. In addition to that, Mike has his deadpan comedy gold throughout each episode along with his ruthless killer side as he is starting to work with Gus.

While Gus and Mike are dealing with their huge and almost impossible undertaking, Jimmy McGill is dealing with his brother's death in his own unique way, and trying to make money by any means necessary during his one-year law suspension. This includes selling mobile phones on the street and creating and executing scams on criminals and civilians of New Mexico. It's truly great slowly seeing how and why Jimmy decides to go on the path that leads him to his alternate ego Saul Goodman. Meanwhile, Nacho, Hector Salamanca, and others are getting their time to shine as well.

This show is one fine example of how to tell a story and develop characters. With its impressive camera work, attention to detail in story and continuity, as well as the performances and dark comedy, Better Call Saul Season Four is the best yet. Just like Breaking Bad, television doesn't get much better than this. I can't wait for season five!

Better Call Saul Season Four comes with three 50GB Blu-ray Discs from Sony. All of the extras are spread across all three discs. There is an insert for the digital download code too. The discs are housed in a hard, blue plastic case with a cardboard sleeve. The reverse side of the inner sleeve box art reveals the details and synopsis of each episode.

Better Call Saul Season Four comes with an excellent 1080p HD transfer and is presented in 1.78:1 aspect ratio. This digitally shot tv show looks great from top to bottom. Detail is sharp and vivid in each scene where we see facial features like stubble, individual hairs, scars, and gory makeup effects nicely. The nice threads Jimmy and Kim wear in their suits always show up nicely as well. Even lower lit scenes, such as the warehouse where the underground lab is being built, showcase high levels of detail with machinery and mobile homes. The New Mexico landscape of desert, cactus, and trees all showcase their leaves, spines, and sand very well without any issues.

Colors are bright and bold too. Jimm's many odd-colored suits perfectly contrast with other characters' steely blue or black suits, which is always fun to watch on screen together. The bright colors at Gus' chicken shop look great as well, along with the clear blue skies and sparsely green coated landscapes, all of which are rich in color. Black levels are very deep and inky without any crush. Skin tones are natural as well throughout. There were no major problems with banding or aliasing here, but only a couple of small instances of video noise, which corrected itself in a matter of seconds. 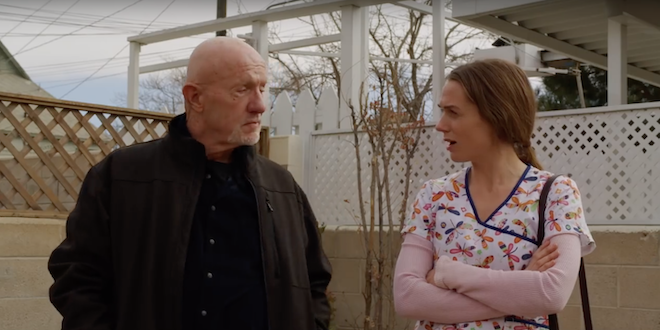 Better Call Saul Season Four comes with an amazing lossless DTS-HD MA 5.1 audio mix. Most of the show is dialogue driven, which has a ton of great moments with yelling, whispering, and being articulate in multiple languages. These forms of dialogue are perfectly balanced and centered nicely. Sound effects are robust and lively when they have to be and are quite startling, which works to significant impact for this show.

Gunshots pack a punch with a low end of bass that rumbles nicely and can often have some excellent directionality. Some sound like loud pops, where others have some deep bass to them. Cars rustling on the road with popped tires sound great along with ambient noises offices, restaurants, and the nail salon. The music of the show always adds to the suspense and entertainment value of the series, some for comedic effect too. There were no pops, cracks, or hiss to speak of either, leaving this audio presentation with excellent marks.

There is a wealth of bonus features present here, including a ton of audio commentary tracks by the cast and crew, a short film, gag reels, behind the scenes, interviews, rehearsals, and more. These are definitely worth your time.

Better Call Saul Season Four is the best season yet. I don't know about you, but I do believe this might just be better than Breaking Bad at this point and I don't say that lightly. The characters, storylines, and action pieces are astonishingly good. The work and detail that has gone into this season to bridge the gaps of both shows are impeccable. There just isn't anything consistently this good on television. The video and audio presentations are both great and the fantastic bonus features are all worth your time. HIGHLY RECOMMENDED!

Sale Price 29.99
List Price 40.99
Buy Now
3rd Party 39.6
In Stock.
See what people are saying about this story or others
See Comments in Forum
Previous Next
Pre-Orders
Tomorrow's latest releases