The Flintstones: The Complete Series

Warner Bros. finally brings the entire series of the iconic television show The Flinstones to Blu-ray with all 166 episodes in glorious 1080p HD. It looks amazing, to say the least. The Dolby Digital 2.0 mono track is wonderful as well, and there are over four hours of bonus material included as well, but none of the extras are new to this release, along with NOT being in HD format, but rather standard-definition. Still, this set is Recommended.

In order to correct the issue:
Email the below address
[email protected]

And include:
Full Name
Phone number
Email address
Mailing address where the replacement disc should be shipped 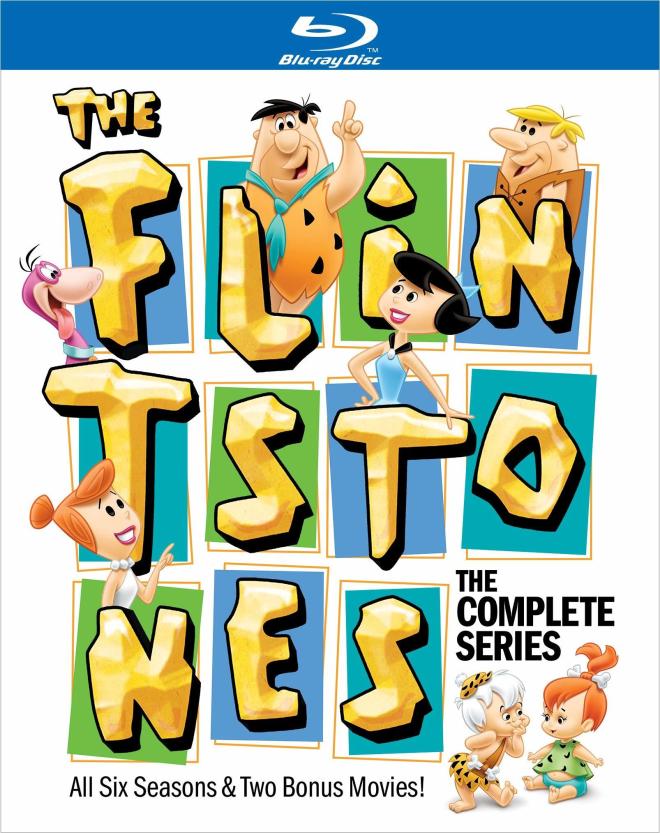 On the last day of September in the year 1960, the network ABC took a big chance in the television market by airing an animated show in its primetime slot with a cartoon called The Flintstones. Nobody knew it at the time, but shortly after its first episode, The Flintstones became an American phenomenon in households across the land. The show would break boundaries and records, becoming the longest-running network animated series on primetime television until The Simpsons.

Despite huge ratings and big financial success, The Flintstones only lasted six seasons from 1960-1966 with a total of 166 episodes. When compared to The Simpsons who are on their 32nd season with 687 episodes, The Flintstones is still included in the "Best Of" lists and is fondly remembered by all ages, along with still churning out spinoff series, merchandise, and movies. There are many reasons why there is still so much love for this animated family and it shows in every episode as Fred and Wilma complete their daily lives in prehistoric times.

Cartoon conglomerates William Hanna and Joseph Barbera took their cues from the success of The Honeymooners and created The Flintstones in that image, with two families dealing with modern-day problems, but set the stage in the prehistoric era, which made for some excellent creative ideas and hilarious comedy. The duo tried this experiment again in the animated show The Jetsons, which is virtually the same exact plot and feel, but instead set during a time where dinosaurs roamed the Earth, it's set in the distant future with cities in the sky, flying cars, and robot housekeepers. That idea didn't go over as well with the public, but with The Flintstones, there's a sense of charm, wit, and easy-going chemistry between all the characters even if Fred is quick to anger - much like Homer Simpson.

Another reason why The Flintstones did so well is that it created a loving bond with its audience and at times even drew on some dramatic and emotional stories that American's could relate to. Some of these include having a baby (the birth of Pebbles), adopting a child (Bamm-Bamm Rubble), jealousy in a marriage, and even a situation where a family (The Rubbles) can't have kids of their own. These are only some of the more realistic and dramatic moments in the series where an animated show known for conjuring silly laughs could still manage to have a good message and cater to adults and kids alike.

The sheer creative genius behind transforming a city and all of its elements into a prehistoric setting is something special. Revisiting this cartoon, it still astonishes how the animators and writers came up with some of the funnier elements of how people in prehistoric went about driving cars, watching television, read a newspaper, and used dinosaurs to help themselves commute and even iron and steam clothes or get a natural back massage. There's something so fulfilling about such a simple show about two families trying to live the American Dream in the prehistoric era that consistently brings laughs, smiles, and creative inspiration that is relatable to modern-day life. Only The Flintstones could and have accomplished this.

The Flintstones Set Yabba-Dabba-Doos its way to Blu-ray from Warner Bros. The discs are housed in two separate hard, plastic blue cases with five discs in each. case. There is a cardboard sleeve to house these six seasons and ten discs with some artwork of the characters of the show. There is an insert with each episode title and season starts. 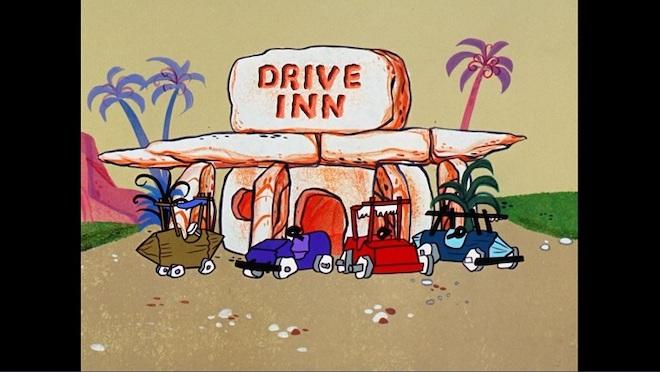 The Flintstones comes with a brand new 1080p HD transfer in its original 1.33:1 aspect ratio for old school television sets from Warner Bros. on all 166 episodes, all of which look excellent. The colors are brighter, bolder, and look the best they ever have here.

Fred's orange, black and blue caveman suit simply illuminates the screen every time as do all the other primary colors on the character's wardrobe. The background animate is ripe with tones of purples, blues, greens, and browns where each color has a new breath of life behind it. The animation itself is smooth flowing and never choppy. The detail is quite excellent as well where some of the brush strokes, smudges, paper textures, and blotches can be seen easily, giving the image depth.

This means that the detail is ever-present in the animation in this original and organic hand-drawn cartoon - something that's not really available in this day and age. There's some good film grain to the animation, keeping its filmic and nostalgic look rather than look like a brand new digital Pixar film. Towards the final two seasons, some of the episodes have some video issues with some edge enhancement and bleeding, which is most likely a source issue, but never-the-less, this new 1080p HD transfer is the best these beloved cartoons have ever looked. 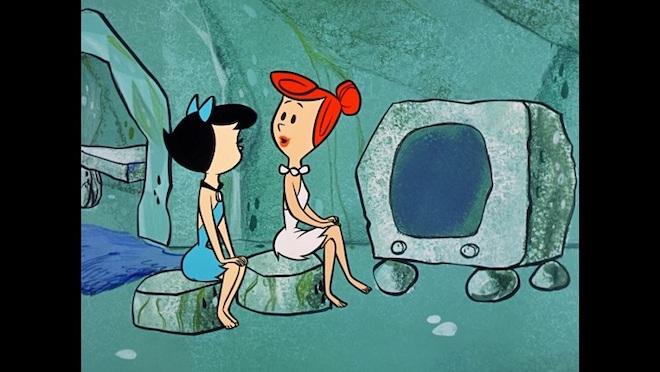 This Flintstone set comes with a Dolby Digital 2.0 Mono track that sounds excellent in its limitations. Dialogue is loud and clean and free of any major issues. The quick-paced jazz-infused score behind the comedy and voice work is also wonderfully paced and always adds to the entertainment value.

The many sound effects of stone and wood banging together, face slaps, noggin hits, and other bowling noises are robust and well balanced - as well as some of the sillier noises of people gearing up to run fast or falling down. It's unfortunate that there is no additional 5.1 track to really deep dive into the surrounds for a fully immersive prehistoric experience. That being said, this audio mix sounds quite good. 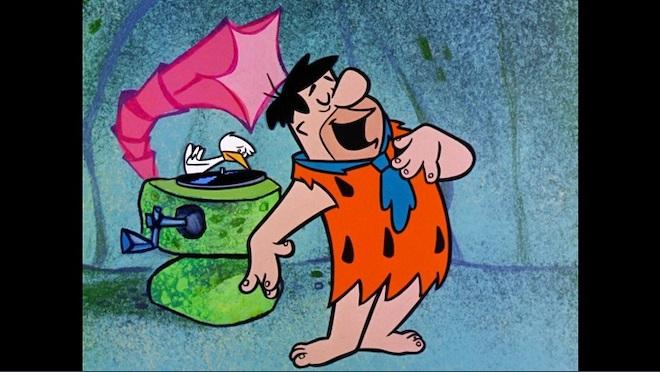 There are about 257 minutes of bonus material included here, none of which are brand new extras or material. Instead, it's all vintage interviews of people working on the show. There are two feature films included here, one being the original 1966 Flintstones film and the other being the 2015 WWE team-up. The really sad element here is that all these bonus features are in standard definition and not 1080p HD. The extras are spread across the set in the set with only a couple of features on each disc. 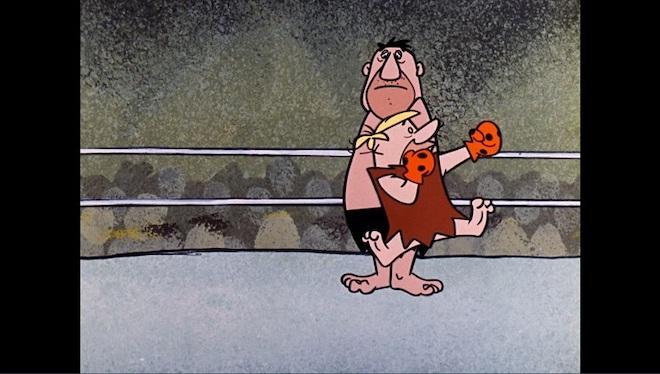 The Flintstones Blu-ray set brings back that nostalgic funny bone in a good way. This is the best the series has ever looked with a 1080p HD transfer and the 2.0 mono track sounds wonderful. There are quite a few bonus features as well, but none of them are new and they're not in high-definition. Still, for fans of the show who are wanting a Blu-ray looking image for these vintage episodes in their entirety, this is the set to get. Recommended!