All dressed up in new digibook packaging, this reissue of The Ten Commandments is the same old edition that's been circulating for years. Those hoping for a 4K UHD upgrade will be disappointed, and the digibook contents won't thrill anyone either, but the good news is director Cecil B. DeMille's classic epic looks as beautiful as ever and sounds great, too. The inspiring story of Moses and his Herculean efforts to free his enslaved people and lead them to the Promised Land remains a captivating cinematic experience packed with massive spectacle, Oscar-winning special effects, and interpersonal drama galore, and during this trying time, the messages of hope, courage, perseverance, and faith resonate even more than usual and provide a degree of comfort amid all the craziness. The Ten Commandments is far from perfect, but it's what Hollywood moviemaking is all about, and as such, it comes heartily Recommended.

When Paramount decided to re-release The Ten Commandments in a digibook edition just in time for Easter, little did the studio know Cecil B. DeMille's classic Biblical epic might also provide some much-needed comfort for a nation struggling to deal with an unexpected health crisis of monumental and frightening proportions. The inspirational story of Moses (famously played with strength and stoicism by Charlton Heston), who heroically fights to free an enslaved people and shows boundless courage and unshakable conviction in the face of oppression, persecution, and a devastating and insidious pestilence, never ceases to lift our collective spirits and renew our faith in humanity. And in this moment of fear and uncertainty, it's especially reassuring.

Say what you will about DeMille's treatment of this stirring and uplifting tale. Impressive, Oscar-winning special effects and sumptuous production values aside, the film flaunts a bombastic tone, features an array of shamelessly hammy performances, and frequently flirts with camp. It's classy one moment and cheesy the next. It dwells on trivial matters and zips through important, meaningful events. The stodgy, stilted script and DeMille's heavy-handed direction weigh the picture down and slow its pace. And yet somehow the overall magnitude of this elephantine production eclipses such deficiencies and spawns a sense of admiration and respect, if not for the film itself, then for the story it tells and the vital themes of perseverance, courage, solidarity, faith, love, and selflessness it so sincerely espouses. 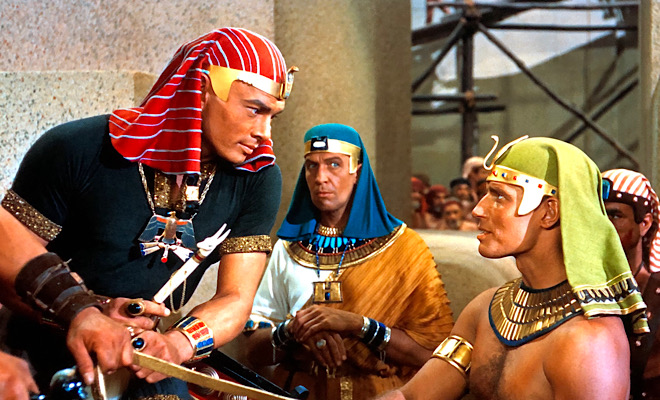 Before anyone gets too excited about this new edition of The Ten Commandments, it's important to point out the packaging is the edition's only fresh element. The video transfers of both the 1956 and 1923 versions of the film are the exact same ones that graced the 2011 limited edition gift set. So, too, are the audio transfers and extras. If you have that version, you don't need this one, unless you crave more compact, shelf-friendly packaging.

As digibooks go, however, this one is disappointing. The 16-page booklet stitched into the center of the three-disc book-like case contains a nice selection of rare color and black-and-white images printed on glossy paper, but the sparse text only scratches the surface and lacks any flair or insight. A classic blockbuster like this deserves a more substantive treatment, and it's a shame more attention wasn't paid to producing a classier and heftier volume. 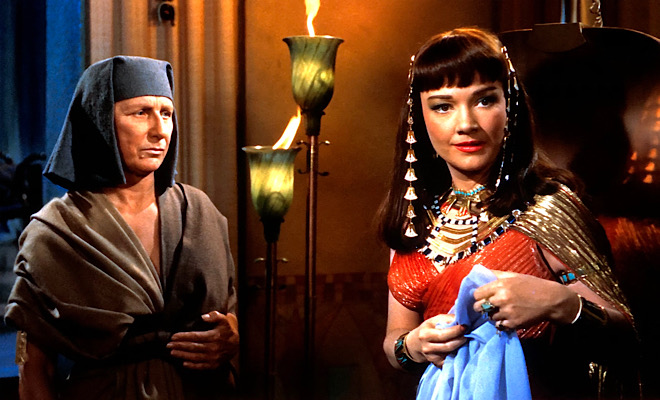 Though not as dazzling or emotionally affecting as Ben-Hur, The Ten Commandments remains a monumental cinematic achievement and one of Hollywood's most iconic and beloved epics. It's a movie every serious cinema fan should have on their shelf, and this new digibook release presents it and its silent counterpart in eye-popping splendor. For many, The Ten Commandments is an Easter tradition, but this year DeMille's film resonates more strongly, and its sober yet hopeful message might provide some consolation during these tough, uncertain times.

For a more in-depth look at The Ten Commandments, check out my colleague Aaron Peck's review of the 2011 limited edition gift set. 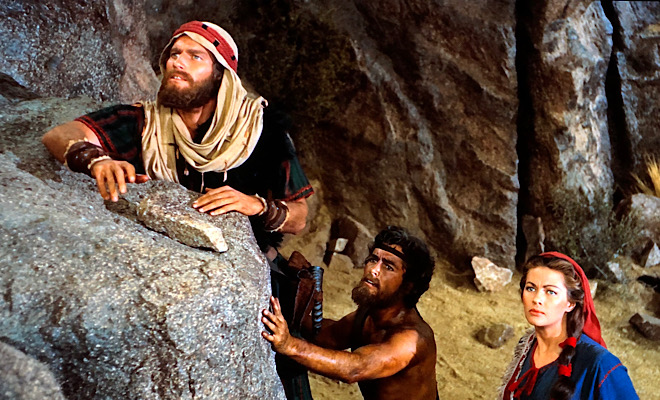 This newest edition of The Ten Commandments arrives on Blu-ray in digibook packaging. The two Blu-ray discs that house the 1956 version of the film are attached to the inside front cover of the book, while the Blu-ray disc that houses the 1923 version of The Ten Commandments, as well as all the supplemental material, is affixed to the inside back cover. A lavishly illustrated 16-page booklet is stitched between the plastic disc holders and features many rare color and black-and-white photos from both versions of the film. Video codec is 1080p/AVC MPEG-4 and default audio is DTS-HD Master Audio 5.1. Once the disc is inserted into the player, the full-motion menu with music immediately pops up; no previews or promos precedes it.

The 1080p/AVC MPEG-4 transfer is the same one used for the 2011 limited edition gift set Blu-ray release. For a full review of the disc's video quality, click here.

The DTS-HD Master Audio 5.1 track is the same one used for the 2011 limited edition gift set Blu-ray release. For a full review of the disc's audio quality, click here.

All the supplements from the 2011 limited edition gift set Blu-ray release have been ported over to this digibook edition. For a full review of all the disc extras, click here.

In this time of fear, uncertainty, and global crisis, the story of Moses - as told by director Cecil B. DeMille in his mammoth production of The Ten Commandments - provides some much-needed hope and inspiration. Yet this classic 1956 cast-of-thousands epic also brims with eye-popping special effects, grandiose spectacle, and plenty of scantily clad A-list actors. The Ten Commandments is Hollywood entertainment at its most bombastic, and borrowing the catchphrase for 1974's That's Entertainment!, boy do we need it now. Paramount reissues one of its flagship films in a brand new digibook format, but the transfers and supplements are exactly the same as those contained in its previous 2011 limited edition gift set. If you own that version, you don't need this one, but if you haven't yet purchased The Ten Commandments, this edition has your name on it and comes heartily recommended.