Every filmmaker has to get their start someplace and David Cronenberg made a name for himself with Shivers. A low-budget hyper-violent sexual horror film about parasites infesting the residents of a secluded elite apartment complex was a sensation when it was first released and it's just as horrific today. Lionsgate through their Vestron Video label delivers a terrific Blu-ray release to the North American markets. The A/V presentation is spot-on and the collection of archival and newly produced bonus features are excellent. If you're a Cronenberg fan, this is an essential piece of the collection. Highly Recommended.

Welcome to Starliner Apartments! Only 12 minutes from downtown Montreal, you get to enjoy all of the luxurious creature comforts including an exercise room, onsite hospitality, dining, shopping medical facilities - and a parasite that will turn you into a mindless violent sex-crazed deviant! As the lone doctor on the premises, Roger St. Luc (Paul Hampton) has a serious problem on his hands. With the number of healthy sane people dwindling rapidly, he must contain the outbreak or risk the infection of the greater population beyond Starliner.

After making two underground amateur feature films Stereo and Crimes of the Future - David Cronenberg was ready to make the leap to professional feature films. That first stab was Shivers. His screenplay was bought by Cinépix with the deal for him to direct, it was a true learn-on-the-job experience for Cronenberg. With Don Carmody and John Dunning the principal producers for Cinépix, they hired another young Canadian upcoming filmmaker by the name of Ivan Reitman to watch over the production of Shivers. While this was a low-budget movie - that under normal circumstances Rodger Corman would have loved to make (and almost did!) - it was still an investment. Cinépix had money on the line but so did the Canadian taxpayers. Even though the movie's investment to the Canadian film commission was already repaid before it was released, Shivers caused a lot of controversies, and the reaction stalled out Cronenberg's burgeoning career for a couple of years. 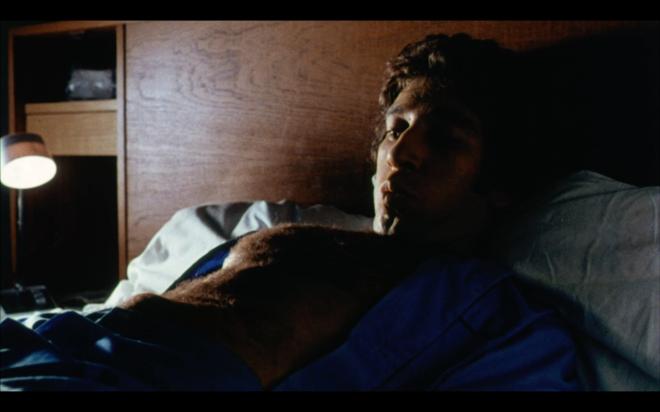 What I love about this movie is that it is such an amateur production. You can see that when compared to Cronenberg's later films, but it's an energetic attempt. Cronenberg may not have known how to pull something off technically with lighting or creature effects but he knew what he was going for and didn't flinch from the material he wrote in any way. By today's standards, this is a pretty tame film, but for its heyday, it was shocking stuff. From moment one where we have the juxtaposition of the smarmy building manager, Merrick played by Ronald Mlodzik selling a young couple on the amenities of the apartment as we see what appears to be an attempted sexual assault unfolding with a much older man attacking a young woman in one of the apartments. There's no context for what's happening. We don't know anything about parasites or sex-slugs. All of a sudden he's knocked her out, taped her mouth shut, undressed her, and is cutting her open and pouring acid in her wounds and then kills himself! It's a damn unsettling and brilliant opening. The rest of the film plays very similar to something like Invasion of the Body Snatchers or Night of the Living Dead where we have a "normal" hero played by Paul Hampton and his nurse played by Lynn Lowry struggling to figure out what is going on - and desperately trying to stop it.

When I was in college I took a course that focused a lot on Cronenberg's work. We covered a lot of ground about what Cronenberg was trying to say or do with Shivers. One of the most common and I think easiest assessments is the danger of a free-sex society. The sexual revolution of the 1960s was winding down and the consequences of that were becoming more and more apparent. This movie predates AIDS but in that window, it gives the film an eerie forecast of the deaths that disease would cause over the next thirty years. I've read and heard more conservative-leaning arguments that it's the infection of sexual deviancy and the erosion of traditional moral values - I don't buy this one since, you know, it's Cronenberg. I doubt he'd view that as a negative.

For my hot take, while I appreciate the sexual liberation angle and the horrors of STDs, I skew towards the horrors of conformity. Specifically - Home Owner Associations. I wrote a paper on this idea of how the sex-slugs were actually an allegory for the erosion of individualism and property. The whole opening credits of Shivers is an advertisement for Starliner apartments and all of the amenities offered therein. But not everyone can come in. Merrick is the gatekeeper of sorts only letting certain people gain access to this lifestyle. We never know when he got sex-slugged in the movie so it's safe to assume he always had a parasite in him. The sex-slugs don't want individuals, they want everyone to be just like them. Kinky sure, but just like them. Then as Roger St. Luc succumbs as the last bastion of individuality - the sex-slugs spread to the rest of the world forcing everything to be like them - and presumably live like them. It's a pretty thin premiss I know, but I hate organizations that take your money just so they can tell you how to decorate your own home to be like everyone else. My wife and I dropped out of buying a house when we found out we'd be obligated to cover a previous owner's debt to the HOA because that person wasn't paying dues for over a decade. Sounds like an idea from the diabolical sex-slugs to me.

As with the best of Cronenberg, there are a lot of themes up for debate with Shivers. While it has all of the hallmarks of an early filmmaker and low-budget horror hokum, it's a smart movie with many terrifying sequences. There's some dark humor peppered throughout, the old ladies out for a walk when a sex-slug is puked on them always makes me laugh. Most importantly I feel this is Cronenberg becoming the filmmaker he was always meant to be. Had this become a Hollywood production as it almost did - it wouldn't have been the same movie and he wouldn't have been the same filmmaker. It's not his best movie - not even close - but it's a great show and an important piece when exploring Cronenberg's oeuvre. If you haven't seen this one yet, check it out. It's a fun creepy treat for the Halloween season.

Shivers makes it's North American debut on Blu-ray thanks to Lionsgate as a part of the Vestron Video Collector's Series with spine-number 18. The film is pressed on a Region A locked BD-50 disc and housed in an eco-friendly case with identical slipcover artwork. The disc loads to an animated main menu with traditional navigation options. A digital slip is also included.

Perviously available in virtually every other territory in the world, Shivers finally lands stateside with a pleasing 1.78:1 1080p transfer. When I volunteered at a rental shop in Chicago we had the Arrow release from 2014 on the shelf and this looks pretty darn close to that in overall appearance. It's been a couple of years since I saw that disc, but I do remember feeling like the Arrow transfer was brighter where this transfer offers deeper colors without the overly hot whites. With that - this has always been a very bright-looking movie and that's something inherently cooked into the 35mm photography as Cronenberg was still getting his visual sea-legs under him. There are several sequences of bloomed whites, pale colors, and pale skin tones that have simply always looked that way. Where I really like this transfer though is overall color saturation. My old DVD didn't offer much in the way of primary saturation and now it feels like reds are truly deep red with blues getting some welcome punch as well.

Black levels are pretty strong for this outing giving the image some welcome three-dimensional depth. When the story moves towards night we get some more dynamic lighting and the shots of Allan Kolman's Nicholas creepily talking to his parasites in the dark shadows of his bedroom. There are a few moments that get close to crush, Lynn Lowry's black dress can occasionally turn her into a floating head and arms. Again a lot of this can be chalked up to source photography than a transfer problem.

I don't know the vintage of this transfer but it's in great shape. Throughout the run, there is a welcome presence of fine film grain with robust details. Facial features, the decoration and aesthetic of the Starliner apartments, the sex-slugs - everything is on display in fine order. Free of any notable speckling, scratches, or age-related issues, Shivers looks great on disc.

The single audio option for Shivers is an authentic and effective English DTS-HD MA 2.0 mono track. This film never really had much of a dynamic sound design so I've never felt much call for a full surround experience. Dialogue is clean and clear throughout without any issue. There are a couple of moments were some rough ADR creeps in and the voices sound canned, but that's always been that way to my recollection. Sound effects are also restrained to the action on screen. There are some atmospheric effects to set the scene but not much. The most "action-packed" moments are in the parking garage or the final pool attack. Some slight hiss is present, but again in my experience with the film, it's always been there and never too much of a distraction. Free of any age-related issues this a solid audio mix.

In true Vestron Video Collector's Series form, fans are treated to a great collection of new and archival bonus features. While he can sound a bit dry, Cronenberg always delivers interesting commentary tracks and his commentary is an essential piece of this release as is his archival interview from 1998 that was included on the original DVD. The Don Carmody commentary is pretty good too, but there's nothing like hearing from Cronenberg himself. After that - all of the new cast and crew interviews featuring David Cronenberg, Lynn Lowry, Joe Blasco, and Greg Dunning are all worth checking out.

It may not be Cronenberg's best movie - but for a filmmaker early in his career Shivers is pretty damn good! It creeped me out when I was a teenager and it's stayed with me for decades. It's a slimy, bloody, creepy creature feature and I love it. Finally being released in the U.S. on Blu-ray from Lionsgate as a fitting member of the Vestron Video Collector's Series, Shivers is given A+ treatment with this release. The A/V presentation is practically flawless while fans are treated to a host of new bonus features including new commentaries and cast and crew interviews. If you're a Cronenberg fan, Shivers is an essential piece of the collection. Highly Recommended.