They're coming! They're everywhere! You're next! The pod people land again on Blu-ray with Olive Film's Signature special edition of Invasion of the Body Snatchers. Legendary director Don Siegel delivered one of the tightest, most-suspenseful and outright terrifying work of science fiction at a time when the genre was treated as kid's stuff. After countless remakes and imitators, this terrific flick endures and still delivers the thrills and chills. Olive brings Invasion of the Body Snatchers back to Blu-ray with a new HD restoration that enjoys some small improvements in quality, a solid audio mix, and a whole host of insightful and interesting new and archival bonus features. Highly Recommended.

"Love, desire, ambition, faith - without them life is so simple, believe me."

"You're forgetting something, Miles."

"You have no choice."

In the sleepy town of Santa Mira, everything seemed normal. And then it didn't. Doctor Miles Bennell (Kevin McCarthy) is urgently called home from an important medical conference expecting an office full of patients. Only no one is there waiting for him - everyone is better. Much better now. Things are fine for Miles as well when his old sweetheart Becky Driscoll (Dana Wynter) moves back to town and the two rekindle an old flame. Everything changes when local pulp writer Jack Belicec (King Donovan) and his wife Teddy (Carolyn Jones) discovers a body. A body without form, fingerprints, or features but is curiously the same size and shape of Jack. Together they learn a silent invasion has already begun and it may be too late to stop. 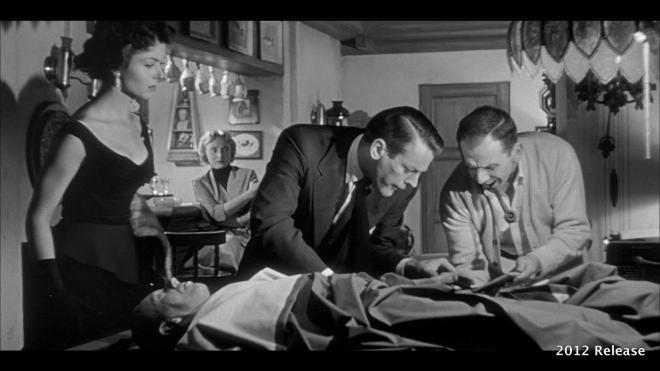 Unlike most kids of my generation, I actually saw this original 1956 adaptation of Jack Finney's novel long before I saw the 1978 remake, Invasion of the Body Snatchers. I remember sitting in the living room in front of our old big-for-its-time tube T.V. kinda-sorta paying attention to this movie and being bored out of my little brain. And then I wasn't bored. Pacing and timing have long been the strengths of Don Siegel's films, the man instinctively knew when and where to go from 0 to 60. When I was a kid it was right about the time that body appears on Jack Belicec's table. Over the next few minutes, I gradually moved from the floor up onto the couch wide-eyed as the suspense and terror built and this seemingly innocuous black and white movie became anything but boring.

Invasion of the Body Snatchers has been a personal favorite of mine for going on thirty years. Ever since that first viewing when I was a little kid that idea of someone you thought you knew and loved could one day become the monster is a terrifying idea. As I grew up I devoured the various remakes and hunted down an old collected copy of Jack Finney's source material and it struck me how timeless this story can be. Every generation can enjoy their own version of Body Snatchers with the film adaptations being loosely adjusted to fit the societal fears of the time.

The brilliant part of Siegel's original is that its politics are vague. Depending on your own personal leanings it can be argued as being anti-communist or anti-conformity. It can be both depending on who's watching. By keeping the story focused on the creepy events of the plot and letting some terrific performances from Kevin McCarthy and Dana Wynter percolate, the film is allowed to be suspenseful as all get out without getting bogged down in politics. You get to add that yourself to enrich the experience for your own sake rather than have it force fed.

This is one of the few movies out there that I haven't minded the remakes. In fact, I love them in their own unique ways. Well, save for the awful soulless 2007 filmI struggle to forget. As much as I love each of them, I always return to the 1956 original. Don Siegel was a master craftsman of suspense and knew how to slowly ratchet up the terror. Invasion of the Body Snatchers takes its time. It knows when to give it a little gas, but it also smartly knows when to tap the breaks and let the deep and creepy ideas worm into your brain. Like the best horror/sci-fi hybrids, it makes you afraid to go to sleep lest you wake up one of them!

Invasion of the Body Snatchers takes over Blu-ray once again courtesy of Olive Films as part of their Olive Signature collection. Pressed onto a Region A BD-50 disc, the disc is housed in a clear plastic case with slipcover. Also included is a booklet containing stills from the film as well as an essay by author Kier-La Janisse that is a worthwhile read. The disc loads directly to a static image main menu with traditional navigation options. 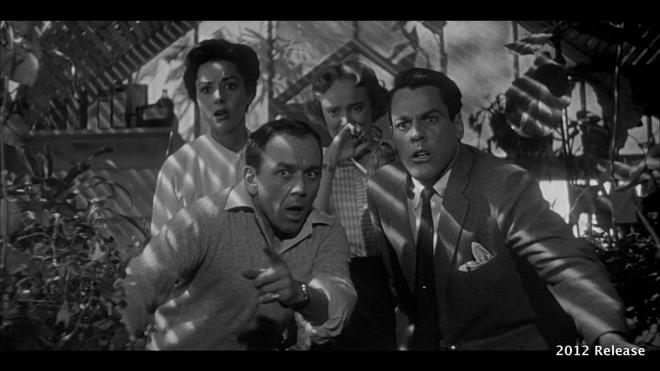 Invasion of the Body Snatchers lands with what Olive bills as a "New High-Definition Digital Restoration." Watching this release and Olive's previous Blu-ray from 2012, this new HD restoration appears to be from the same scan while offering up some small benefits. It's not the night and day difference some fans were likely hoping to see. For those interested in bitrates, the original 2012 release peaked at around 25mbps where this new release runs steady at 32-34mbps. Now, part of that has to do with how this film was finished in post-production. The widescreen "Superscope" 2.00:1 framing was an afterthought. This process involves zooming into the frame cutting off the tops and bottoms and sometimes even the sides of a typical 1.33:1 image resulting in the loss in clarity and fine detail. Bottom line, this film isn't likely to ever look as sparkling or well detailed as one may hope and not without a major time-consuming and expensive from the ground up restoration.

As for this transfer, I'm pleased to say that the subtle refinements are appreciative. The image maintains a notable but not dominating grain field that improves some very fine facial features, clothing patterns, and other very small details. Wide shots you're not likely to notice much difference but in close-ups where sometimes a character's skin could look a little waxy and undefined, there are now some small creases and pigmentation details. Close-ups and middle foreground shots are where you're going to enjoy the most noteworthy improvements. Black levels are still dark and inky and give the image a decent sense of depth. The greyscale is natural with subtle gradience from pure white to deep black with this release being a slight shade darker than the 2012 disc helping to mitigate blooming whites and chunky contrast while adding to the creepy mood of the picture.

I was already happy with the 2012 release as it was a major step up from the old DVD and terrible pan and scan VHS prints. This new transfer offers slight improvements where it counts - just don't expect it to wow you. 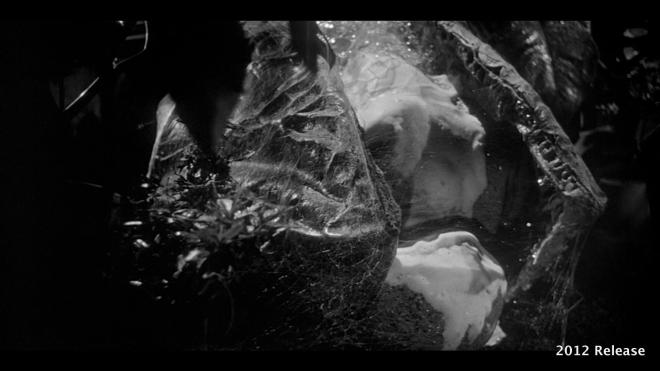 Invasion of the Body Snatchers also enjoys a small tweak in the audio department moving up from an English DTS-HD MA 1.0 track to a DTS-HD MA 2.0 mono mix. The original 1.0 mono was pretty great, this new 2.0 track uses the extra channel to give the mix just a little extra oomph and texture. Clarity is terrific without any age-related hiss or hum. Dialogue is clean and crisp without any distortion. The creepy score from Carmon Dragon adds that extra chill down the spine. For a narrowly focused audio experience, there is a nice sense of atmosphere and spacing. Levels are spot on without any call for adjustment. This mix may not offer up a huge improvement over the previous release, but then that was already a pretty high bar. 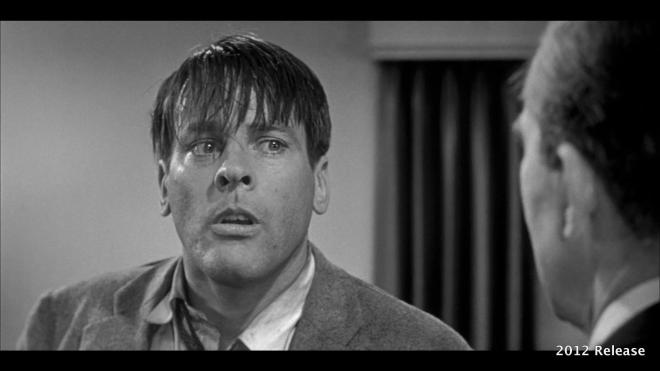 Where this new Olive Signature release of Invasion of the Body Snatchers wins the day is in the bonus features department. Not only are a ton of vintage features from the old DVD and LaserDisc releases brought over, but Olive commissioned a bunch of great new interviews from historians and filmmakers. The Larry Cohen and Joe Dante interviews are fun because they're giddy fans that get to talk about their favorite movie. The commentaries are first-rate and the archive materials are nice to see again on disc.

Invasion of the Body Snatchers is a timeless piece of classic science fiction. From a small serialized story in a sci-fi magazine to its pulp novel debut, Jack Finney's original story has been revisited again and again for good reason. It's timeless and terrifying. Don Siegel's original 1956 film remains the most faithful, mixing genuine suspense against smart political themes that allows the audience to see and appreciate the film their own way. It scared me as a kid and, after countless viewings, it still hooks me. Invasion gets a nice Blu-ray upgrade to the Olive Signature collection with this special edition release. The image enjoys only slight improvements and the audio is given a little TLC without overworking it. The big benefit here is the great collection of bonus features that will keep you occupied for a few hours. Whether you're a fan or just love the classics, this Invasion of the Body Snatchers is Highly Recommended.

Sale Price 32.15
List Price 39.95
Buy Now
3rd Party 28.98
In Stock.
See what people are saying about this story or others
See Comments in Forum
Previous Next
Pre-Orders
Tomorrow's latest releases