Iconic funnyman Bob Hope and leading lady Paulette Goddard star in The Ghost Breakers - a funny and spooky followup to their comedy/thriller classic The Cat and the Canary. Jokester Hope is once again helping beautiful heiress Goddard as she inherits a "haunted" castle in Cuba where spooks and zombies roam free! Some of the jokes are a bit dated, but Hope's presence and Goddard's gumption make this a delight. Kino Lorber Studio Classics delivers a solid Blu-ray release with an excellent transfer, solid audio, and some worthwhile bonus features. Recommended.

Bob Hope is radio underworld gossip Larry Lawrence Lawrence (his parents didn't have any imagination) and he has just managed to tick off the worst gangster in town. When he mistakenly believes he's shot a gangster in self-defense, he winds up hiding out in heiress Mary Carter's (Paulette Goddard) steamer trunk. Grateful to her for helping him hide out, Larry is in for it when the trunk is loaded onto a cruise ship bound for Cuba! Turns out Mary has inherited an old castle in Cuba - a castle with a dark history and is probably haunted. But there are living breathing people out there who would rather Mary not take over her inheritance and are willing to do anything to keep her out of the castle. 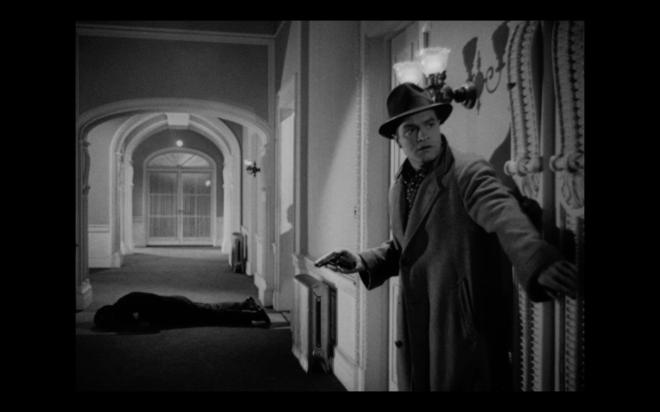 With the hit of The Cat and the Canary under their belts, another spooky comedy was quick to order reuniting stars Bob Hope and Paulette Goddard together for The Ghost Breakers. Watching both films back to back, it's honestly a toss-up which one is the best of the bunch. They're both hilarious. While I love The Cat and the Canary and how it apes the traditional murder mystery family gathering plot and pumps some good frights and laughs, The Ghost Breakers plays flat out for the comedy. The thriller mystery elements are still in play, but it's Hope who is front and center throughout. Willie Best sticks around for a few good gags (and a few not so funny) and terror support with Richard Carlson, Paul Lukas, and a young Anthony Quinn rounding out the cast of colorful characters.

When you step into a Bob Hope movie you know what you're getting pretty much right away. You're not here for drama, you're here for the fast one-liners and gags and Hope delivers on every front. While Willie Best is supposed to be the straight man, it's Hope who often has to pull off double duty pitching himself his own home runs. Hope was always one for biting the industry hand that fed him but he also wasn't afraid to throw out some politically leaning zingers. Richard Carlson explaining  "zombies" earns a great retort from Hope.

I might peg The Ghost Breakers as the funnier movie, but The Cat and the Canary has a better structure. This one feels a bit loose at times often keeping Hope away from Goddard and the charm the two shared on screen. It's nice that director George Marshall didn't try to recreate every aspect of Canary - but there are moments where this one feels like it's playing a bit thin. Still, those slow moments are few and far between. At 85-minutes, this movie moves fast and throws the jokes with vigor. If you're a fan of Bob Hope's brand of material, you'll be right at home with The Ghost Breakers.

The Ghost Breakers arrives on Blu-ray courtesy of Kino Lorber Studio Classics. Pressed on a Region A BD-25 disc, the disc is housed in a standard study Blu-ray case. The disc loads to a static image main menu with traditional navigation options.

Sourced from a new 2K master, this 1.37:1 1080p transfer is the best I've seen for this movie. It'd been several years since I last sat down with The Ghost Breakers on DVD and this new disc is easy to see the improvement. The elements sourced for this transfer aren't crystal pristine, but they're in overall great shape. There are a few spots where scratches and speckling are heavier than other scenes that are practically spotless. But for a movie over 80 years old, it's not that bad. Throughout, detail levels are appreciable with a natural film grain presence. Facial features, clothing, and production design come through nicely. Grayscale is strong allowing for an impressive gradience from deep inky black to bold whites with plenty of shadow work in between. While not flawless, this is strong stuff easily outpacing any previous home video release.

The Ghost Breakers comes packed with a strong DTS-HD MA 2.0 mono mix. With the film mostly being about the gags, the dialogue is clean and clear throughout. Sound effects can sound a little canned in places, gunshots, crashes, the steamship horns account for the majority of the sound effects makeup. Scoring is minimal really only coming in here and there to accent the mood without overplaying the mix. A little hiss still holds in the track but nothing to complain about. Free of any pops, cracks, or dropouts, this is a fine track.

There may not be a huge package of bonus features, but what's here is nice. The audio commentary with film historian Lee Gambin is worth the listen providing interesting facts about the production without lulls or stops in the track. Also, any time you get a Trailers From Hell is a good brief bonus and this interview with Larry Karaszewski is fun stuff.

One of the first horror-thriller comedies, The Ghost Breakers is classic stuff. Bob Hope and Paulette Goddard are in terrific form teaming up for another round of mystery, thrills, chills, and comedy. The story may be a tad thin, but the jokes fly so fast you hardly notice the plot shortcomings. It's a Bob Hope movie, you're there for the gags and this one delivers in spades. Kino Lorber Studio Classics delivers The Ghost Breakers to Blu-ray in fine order offering a strong A/V presentation with a new audio commentary for film buffs to peg through. All in all a splendid release. Recommended.