The Cat and the Canary

Bob Hope helps beautiful heiress Paulette Goddard keep her inherited fortune - and stay alive - in Elliott Nugent's classic horror-comedy The Cat and the Canary. With a cracker of a mystery, steady direction ramping up the tension, and Bob Hope's penchant for slinging one-liners, this 1939 gem is still a wild 75-minutes of classic Hollywood entertainment. Kino Lorber Studio Classics delivers a worthwhile Blu-ray featuring a dated but strong transfer with an effective audio mix and a great audio commentary to tackle the bonus features. Recommended

The family of Cyrus Norman has gathered per the instructions of the millionaire's will at the stroke of midnight ten years to the minute after his fateful death. It is there that his lawyer Mr. Crosby (George Zucco) will read the will. With cousins of distant relations in attendance, socialite Joyce Norman (Paulette Goddard) is named heir. But stipulations in the will account for another heir should Joyce be proven insane or - gasp - die within the next 30 days. With so many people standing to earn a large sum of money, Joyce's only chance for survival - and entertainment - is the goofball actor Wally Campbell (Bob Hope) who is all too happy to rekindle their old romance. All would be well if it weren't for an escaped insane murderer prowling the grounds of the old estate. 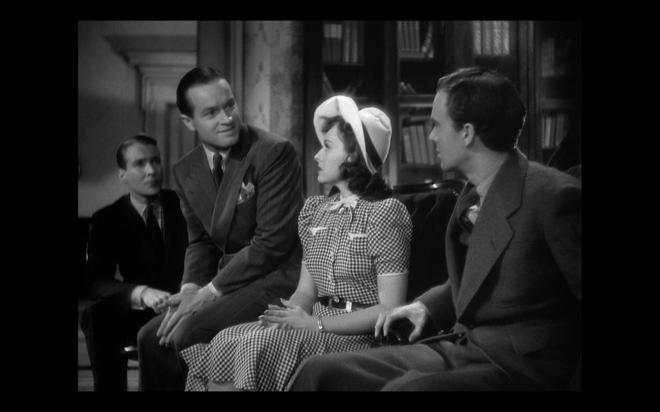 With the one-two punch of Bob Hope and Paulette Goddard's thriller-horror/comedy hybrids of The Cat and the Canary and 1940's The Ghost Breakers, Hollywood quickly caught wind of the box office potential of taking their best comedic teams and scaring the pants off them to the delight of audiences everywhere. Soon everyone from Abbott and Costello to The Three Stooges were enjoying the prospects of a few fright-fueled comedies. While The Cat and the Canary lands somewhere in that horror/comedy echelon, it's closer to being something akin of an Agatha Christie murder mystery like 10 Little Indians only with a comedic bent.

To the credit of Elliott Nugent and writers Walter De Leon and Lynn Starling working from the play by John Willard, this is a breezy 75-minute feature that never overplays its hand. It sets up the stakes and the major players in fast order, gets the plot out of the way, and lets the hijinks ensue. While you don't get a ton of time to get to know the side players and their motivations, the setup that there is a mysterious possible second beneficiary to the will is enough. Millions of dollars is a chance worth taking even if the crime is a small case of murder. The thrills and chills ramp up steadily but the film never loses sight of the fact that Bob Hope is the star.

Throughout, Hope is called upon to provide some brave-faced cowardly comedy. As was the case with The Ghost Breakers the man could be his own straight man if the need called. He runs off the jokes with ease, but he never overplays the comedy for yucks. He can mug for the camera but he holds it back enough that it never breaks the 4th wall. The jokes help serve the story instead of the story being in service of the jokes. It may be a Hope vehicle but it's a thriller first with some classic horror elements to spice things up with Bob doing his best to keep the laughs going:

Throughout, the cast is in great form. Hope obviously can hold the audience interest and Paulette Goddard is an effective leading lady, but it's the colorful cast of side characters who can steal the show in their own way. Gale Sondergaard is fun as the spooky spiritually-influenced caretaker. John Beal, Douglass Montgomery, Elizabeth Patterson, and Nydia Westman all get moments within their respective roles. Westman especially gets some bonus comedic time proving herself to be a silly cowardly capable character alongside Bob Hope.

I hadn't sat down to this movie in ages. A wonderful play, I've gotten to see this performed live on stage and while the play does have some comedy elements, it's not as funny as this movie. It can't be when you have Bob Hope headlining! The first Hope movie I ever saw as a kid was The Ghost Breakers so it's the one I've returned to most often, but I always love sitting down for this one. The Cat and the Canary is a genuine classic that's perfect viewing for the fall season.

The Cat and the Canary arrives on Blu-ray from Kino Lorber Studio Classics. Pressed on a Region A BD-25 disc, the disc is housed in a standard sturdy case. The disc loads to a static image main menu with traditional navigation options.

Judging from the older Universal Studios opening logo, this 1.37:1 1080p transfer wasn't sourced from a recent restoration or remaster. Not to say that is a bad thing, there are just some cooked in flaws likely the result of the old master source. Details, while not eye-popping, are appreciable throughout. Facial features, costuming, and the film's impressive set-design work are all on display. Close-ups and middle shots look the best but overall the show features some nice refined lines with an organic grain presence. Black levels are pretty good, most of the time reaching that deep inky tone we like to see, but there are a few sequences where contrast is a little hot, and blacks take on a lighter gray tone. Grayscale overall is in good shape with clean shadows.

The biggest issue with this master is some slight frame judder. It's most apparent during the opening credits, but every few seconds it looks like the frame wants to dance a little before settling down for a stretch. It's not terrible, or all that distracting, but it's one of those things where you see it once, you keep seeing it. After that, there is some age-related specking and a couple of scratches. I hadn't watched this one in some time, I never owned it on DVD even so my memories of past rentals and TCM viewings are hazy, but I'd say this transfer does the film justice. It certainly could use a restoration but that's true for most films. The current condition shouldn't dissuade anyone from a purchase.

Along for the ride is a perfectly effective DTS-HD MA 2.0 Mono mix. Similar to The Ghost Breakers, this mix is perfectly good at what it does and that's largely focusing on dialog and important key sound effects with a few breaks for scoring to punctuate the mood. Atmospherics are pretty restrained, there's not a lot of "dead air" where someone isn't talking or Bob Hope isn't making a joke. A funny moment where Hope is having a conversation with croaking bullfrogs and a few jaunts into the swamps gives the most sense of an atmospheric location. There is some slight hiss throughout, but nothing terrible. The main issue for this mix was I felt the need to pop the volume up a bit more than normal, which in turn led me to hear more hiss. You don't need to ride the volume once you get it set comfortably.

As with the case for most Kino Lorber Studio Classics releases, bonus features aren't a robust package, however the new audio commentary with Lee Gambin is well worth it. Back to back with The Ghost Breakers Lee put in the time for these releases and offers up some fun anecdotes detailing the production. After that, we get a theatrical trailer and a collection of trailers for other KLSC releases.

It's hard to pick a favorite between The Cat and the Canary and The Ghost Breakers - both are great movies in their own ways both with Bob Hope and Paulette Goddard in terrific form together. The Ghost Breakers may have a steadier stream of comedy but The Cat and the Canary is probably the better plot leaning into the murder mystery tropes to prop up the humor. At 75-minutes the movie moves fast but doesn't leave anything to waste either. All in all a fun way to spend an evening. Kino Lorber Studio Classics has done a fine job with this release offering up a respectable transfer with solid audio and another great audio commentary to dominate the bonus features. If you're a Bob Hope fan or just like some old-school horror/comedy antics, The Cat and the Canary is Recommended.