The Eagle and the Hawk

Along with hand-to-hand trench combat, aerial dogfights defined World War I, and the bloody skirmishes in the skies between Allied and German pilots provided Hollywood with a thrilling canvas for a number of early war movies, including the first Best Picture Oscar winner Wings. Patriotism, heroism, and brotherhood pervade all these films, but The Eagle and the Hawk stands as one of the period's few productions to depict the devastating toll the steady diet of death exacts on the iron men who put their lives and those of their comrades at risk on a daily basis.

The gold standard of Golden Age anti-war films always will be All Quiet on the Western Front, and though The Eagle and the Hawk lacks the scope, depth, and brute force of Erich Maria Remarque's classic tale, it still packs powerful punches as it intimately examines the futility and waste of war over the course of its brief 73-minute running time. Director Stuart Walker (with an able assist from associate director Mitchell Leisen, who would soon become a top director himself) starkly depicts how a steady stream of achingly young, starry-eyed soldiers with dreams of battlefield heroics often die on their inaugural missions, yet these slaughtered lambs are only names on a chalkboard to stoic commanders who can't let individual casualties distract them from the all-important missions at hand.

Lt. Jerry Young (Fredric March) pilots many of those missions, but after he loses a succession of gunners and photographers on reconnaissance flights over France, he begins to crack under the strain. "I'm a chauffeur for a graveyard, driving men to their deaths day after day," he says. His devil-may-care attitude and quiet bravado give way to despair, and while he searches his soul for a reason to keep fighting, he drowns his sorrow in drink. Lt. Young doesn't want consolation, nor does he crave kudos for killing the enemy. He just wants answers to unanswerable questions. He accepts that war is hell, but because he can't justify all the killing and carnage, he struggles to muster the will to do his duty. 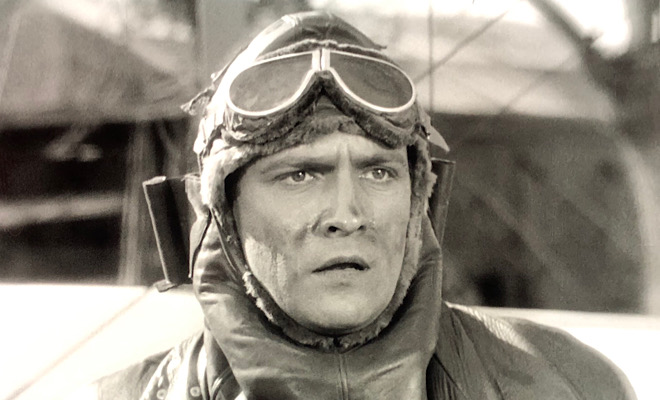 Unlike other World War I aviation dramas, The Eagle and the Hawk doesn't make its violent aerial confrontations its focal point. If you're looking for acts of derring-do and thrilling stunts, you'll be disappointed. It's the fallout from those sky battles and the harsh reality of life on the ground that comprise the on-screen drama. The Eagle and the Hawk unashamedly wears its anti-war message on its sleeve and wields as much visceral power many years - and wars - later as it did back in 1933. That's largely due to several eloquent, persuasive speeches written by future Oscar winner Seton I. Miller (Here Comes Mr. Jordan) that are delivered with unaffected fervor by the always magnetic March. In fact, the film might even play better today than it did at the time of its release.

The Eagle and the Hawk is adapted from a story by John Monk Saunders, who specialized in aviation dramas. (His original stories also include Wings, The Dawn Patrol [for which he won an Oscar], Ace of Aces, Devil Dogs of the Air, West Point of the Air, and The Conquest of the Air.) Male bonding and rivalries fuel the narrative, and the script incisively examines how soldiers must subjugate their emotions and adopt an almost robotic demeanor to keep their heads above water. When those internalized feelings finally explode, they're explained away as an uncharacteristic outburst instead of a cry for help. Not surprisingly, women are scarce in this world. It's not a coincidence the film's only female character is simply named The Beautiful Lady, and her sole purpose is to listen to, console, and probably sleep with Lt. Young when he takes a much-needed furlough to Paris.

The luminous Carole Lombard plays that minuscule part, and in a ravishing white gown and fur - and thanks to a couple of breathtaking close-ups - she's the personification of it. At the time, it was rare for a star of her magnitude to accept such a subordinate role, but Lombard exudes empathy and maximizes every moment of her screen limited time. Cary Grant also files a strong early performance as Young's bitter comrade who constantly strives to prove his worth and earn his rival's respect. It, too, is a secondary part, but Grant makes the most of it and holds his own with March in a couple of stirring scenes. 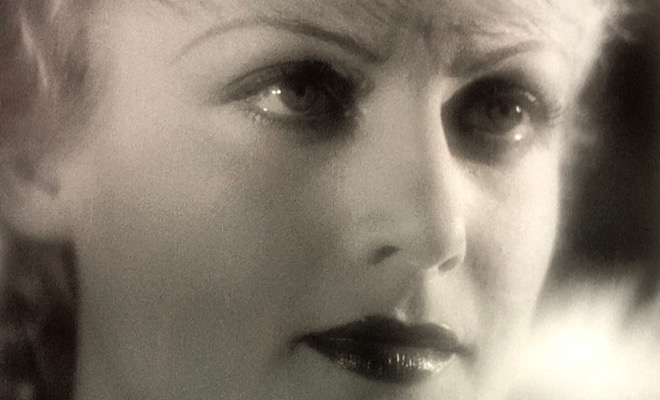 Despte such fine work (Jack Oakie also impresses as a happy-go-lucky member of the corps), The Eagle and the Hawk belongs to March, and it's his finely etched portrayal that makes this drama such an enduring motion picture. His impassioned speeches never devolve into histrionics and his quiet moments brim with understated emotion. When he awakens from a nightmare and can't shake the horrific visions, his wild ravings ring true, and when he later rails against the practice of awarding medals for striking down the enemy - "I got these for killing kids! They're all chunks of torn flesh and broken bones and blood! And for what?!" - he's both riveting and heartbreaking. March had already won a Best Actor Oscar for his bravura performance in Dr. Jekyll and Mr. Hyde two years earlier (and would earn another one 13 years later for The Best Years of Our Lives), but his work here is equally deserving and offers further evidence of his stature as one of the most talented performers of Hollywood's Golden Age. Yes, it's that good.

Though the film's ending is a bit hard to swallow and Paramount executives deleted a key final shot that would have added even more power and gravitas to the film, The Eagle and the Hawk stands as one of the better World War I movies of the 1930s. It's also one of the most underrated. Hopefully, its Blu-ray release will introduce this beautifully mounted, moving, and memorable film to a new generation of viewers, who will heed its powerful, timeless message. 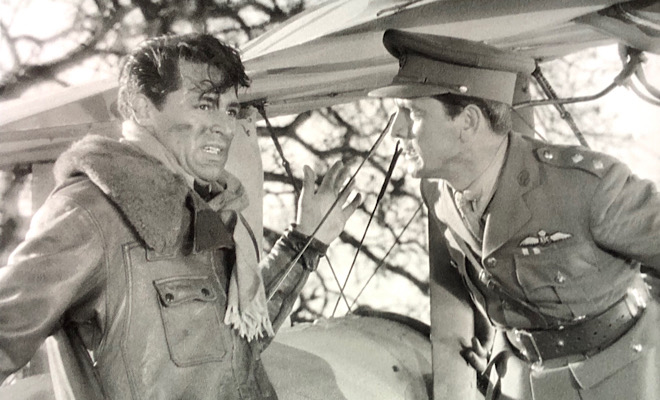 The Eagle and the Hawk arrives on Blu-ray packaged in a standard case. Video codec is 1080p/AVC MPEG-4 and audio is DTS-HD Master Audio mono. Once the disc is inserted into the player, the static menu with music immediately pops up; no previews or promos precede it.

A surprisingly crisp and clean 1080p/AVC MPEG-4 transfer brings The Eagle and the Hawk to brilliant life. Yes, there's some age-related print damage (most notably some persistent vertical lines), a missing frame or two, and some incidents of softness, but on the whole this is a very strong rendering of an early 1930s film that doesn't seem to have undergone any restorative work. Grain is evident but well resolved, so the picture flaunts a beautiful film-like feel, and excellent clarity and contrast produce a vivid image. Blacks are rich and deep, Lombard's white fur flaunts a high degree of detail, and nicely varied grays keep everything well balanced.

Shadow delineation during nocturnal scenes is quite good, crush is minimal, and several lush yet sharp close-ups stunningly highlight March's often tortured face, Grant's dashing good looks, and Lombard's palpable allure. There's one lengthy extreme close-up of Lombard that's just breathtaking in its beauty, and it allows the actress to make an indelible mark on a film that's almost completely fueled by testosterone.

Compared to other transfers of early 1930s movies, this one earns very high marks and showcases the artistry and passion that help make The Eagle and the Hawk such an absorbing and moving film.

The DTS-HD Master Audio mono track supplies clear, well-modulated sound. There's a lot of whirring airplane engines, propeller sounds, and rat-a-tat-tat machine gunfire during the course of the movie, as well as a fairly large explosion, but the track handles all that noise, keeping distortion at bay while still prioritizing the spoken word. Not bad for an 87-year-old track. The unobtrusive music score exhibits a nice fullness of tone and all the dialogue is easy to comprehend. Any age-related hiss, pops, or crackle have been meticulously erased, leaving a clean track that handles all its rigorous chores with aplomb.

In addition to what looks like a re-release theatrical trailer, the only extra is an audio commentary by author and film historian Lee Gambin. Gambin spends a great deal of time examining the potent themes of The Eagle and the Hawk and the depth that permeates the film. He properly salutes March's bravura portrayal, analyzes the dynamic between March and Grant, addresses the rumor that associate director Mitchell Leisen was actually the film's primary director, and describes an accident that occurred on the set during shooting. He also talks about Lombard's impact in her brief role (and a key line that was cut from her part), discusses the aircraft used in the film, and quotes from a few contemporary reviews. This is a fine track that's worth checking out if you have the time.

A moving anti-war film that preaches the futility of battle and depicts its devastating psychological effects, The Eagle and the Hawk features passionate performances from Fredric March, Cary Grant, and - in a brief but penetrating scene - Carole Lombard. An over-the-top ending almost sabotages this probing study of World War I airmen and the stress and horrors they must endure on a daily basis, but the film's important themes eclipse it. A surprisingly vibrant and clean transfer, solid audio, and an involving commentary track distinguish Kino's Blu-ray presentation of this little-known but deeply affecting early 1930s gem that deserves to be rediscovered. Highly Recommended.