A sophisticated supernatural Hollywood comedy whose influence continues to be felt, Here Comes Mr. Jordan stars the eminently versatile Robert Montgomery as a working-class boxer and amateur aviator whose plane crashes in a freak accident. He finds himself in heaven but is told, by a wry angel named Mr. Jordan (Claude Rains), that his death was a clerical error, and that he can return to earth by entering the body of a corrupt (and about-to-be-murdered) banker—whose soul could use a transplant. Having inspired a sequel with Rita Hayworth and two remakes (the first starring Warren Beatty and the second Chris Rock), Alexander Hall’s effervescent Here Comes Mr. Jordan is comic perfection.

Everyone seems to remember Warren Beatty's 'Heaven Can Wait,' the romantic fantasy about an executive angel who transplants the soul of a football player into another body after he mistakenly dies before his appointed time, but few seem to recall the far superior film upon which it is based. That film is Alexander Hall's delightful 'Here Comes Mr. Jordan,' a whimsical romp with macabre overtones that uses its humor to make thought-provoking statements about the power of fate and strength of the human spirit. With an Oscar-winning story and screenplay, terrific performances by a gaggle of perfectly cast actors, and lighter-than-air presentation, this breezy comedy more than stands the test of time, and its faith and optimism will surely cheer even the most dyed-in-the-wool curmudgeon.

Movies about death traverse tricky territory, especially if they walk a tightrope between comedy and drama. Only a few do it well, and 'Here Comes Mr. Jordan' minted the formula. The story of Joe Pendleton and his bizarre plight is so wonderfully clever and airtight, it almost seems plausible. A promising boxer with a shot at the heavyweight crown, Joe (Robert Montgomery) - against the advice of his concerned trainer and friend, Max Corkle (James Gleason) - decides to fly his single-engine plane to the site of his title bout. Sadly, the routine flight takes a tragic turn when a mechanical failure brings down the aircraft, sweeping a bewildered Joe into an ethereal purgatory where newly deceased souls are registered and processed for future assignment.

Joe's name, however, isn't on the master list overseen by head angel Mr. Jordan (Claude Rains), who soon discovers Joe wasn't supposed to die until 1991 (a whopping 50 years later). Messenger 7013 (Edward Everett Horton), a novice angel who's new at his job, admits to snatching Joe's soul from his body in an act of mercy seconds before the plane crashed, sparing him from what he presumed would be a painful demise. Yet in so doing, he also robbed Joe of the chance to survive, which was his destiny.

There's talk of returning Joe's soul to his body, but when they learn that body has already been cremated, Mr. Jordan takes Joe on a quest to find a suitable new body for him to inhabit. After considerable searching, they settle on Bruce Farnsworth, a corrupt financier who's about to be murdered by his wife and personal secretary. Joe isn't thrilled to assume the identity of such a scoundrel, but he's attracted to Bette Logan (Evelyn Keyes), the desperate daughter of one of Farnsworth's business associates, whom Farnsworth has cunningly embroiled in a stock scandal. Joe wants to help Bette clear her dad's name and settle Farnsworth's accounts, but maintaining his own identity and living his life in someone else's body proves to be more complicated than Joe and Mr. Jordan both imagined.

'Here Comes Mr. Jordan' especially connected with audiences in 1941, as America faced the prospect of entering a global war and sending thousands of young men to face danger and uncertainty in strange, faraway lands. Fear gripped the country, yet somehow this buoyant movie, which takes a serious subject and whips it into a soufflé, provided viewers with a measure of comfort. Maybe, just maybe, if a soldier was tragically and prematurely killed, his soul might find a home in another body, continue to live on, and realize its ultimate destiny. Hope and blind faith are huge components of fantasies, which often try to solve the great mysteries of life, and 'Here Comes Mr. Jordan' gave worried World War II-era families something to hang on to during a stressful time.

And it serves the same purpose today. Maybe that's why - with the possible exception of 'It's a Wonderful Life,' which also deals with celestial intervention and infuses us with hope and optimism - 'Here Comes Mr. Jordan' is one of the most copied movies of all time. Its basic premise and themes have been endlessly recycled and transformed into a variety of guises, and its timeless ideas are both enduring and universally appealing.

As are the film's performances. Montgomery is best known as a dapper, wisecracking leading man who enlivened countless drawing room comedies in the 1930s and 40s, but he consistently sought to expand his range. 'Here Comes Mr. Jordan' provided him with a prime opportunity, and he makes the most of it, filing a natural, endearing portrayal laced with some charming Brooklynese that keeps his heavenly character grounded on Earth. The role earned Montgomery his second Best Actor Oscar nomination, and Gleason, as the consistently confused and astounded Max Corkle was honored with a Best Supporting Actor nod for his authentic work. (Thirty-seven years later, Jack Warden would also receive a nomination for playing Max Corkle in 'Heaven Can Wait,' marking the first time two actors were nominated for the same Oscar for playing the same part.)

The always excellent Rains lends the film essential gravitas (never have his patented velvet tones sounded so mellifluous or fit a character so well), while the always befuddled Horton punches up every scene in which he appears. The fresh-faced Keyes makes a lovely romantic foil for Montgomery, and eagle eyes will spot a young Lloyd Bridges in an uncredited bit as a celestial pilot.

'Here Comes Mr. Jordan' won't change your life, but it just might soothe your soul. Who knows if its representation of the afterlife is true, false, or somewhere in between, but this funny, clever, and touching fantasy, which received six Academy Award nominations, including one for Best Picture, makes the idea of death a bit easier to swallow. You may not buy what it's preaching, but thanks to strong writing, solid direction, and wonderful performances, it sure is fun to listen to the sermon. 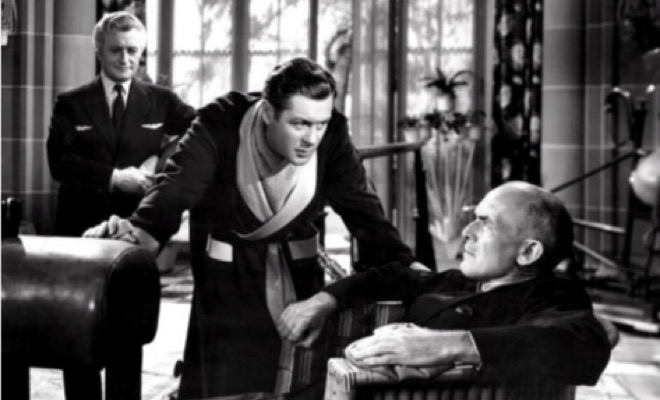 'Here Comes Mr. Jordan' arrives on Blu-ray packaged in a standard Criterion case. A 12-page booklet featuring an essay by Farran Smith Nehme, a cast and crew listing, transfer notes, and illustrations from the film is tucked inside the front cover. Video codec is 1080p/AVC MPEG-4 and audio is LPCM mono. Once the disc is inserted into the player, the static menu with sound effects immediately pops up; no previews or promos precede it.

According to the liner notes, "this new digital transfer was created in 2K resolution...from a 35 mm preservation fine-grain master positive." The opening credits look spectacular - clear, crisp, and vibrant - but the bulk of the film never quite lives up to them. Grain is the major culprit; it's often quite thick, and the levels tend to fluctuate during several scenes, occasionally obscuring details. Though the picture appears wonderfully film-like at times, it can turn on a dime and look brittle and overly processed. Clarity and contrast are quite good, blacks are rich, and a nicely varied gray scale heightens the sense of depth, especially during long shots. Close-ups are sharp enough and only a few stray marks dot the source material. Shadow delineation is fine, crush is never an issue, but a bit of noise sometimes creeps into the frame. Though this isn't one of my favorite Criterion transfers, it still honors the Oscar-nominated cinematography of Joseph Walker, who was similarly honored for his work on Frank Capra's 'You Can't Take It With You' and Howard Hawks' 'Only Angels Have Wings,' as well as 'The Jolson Story.' Despite its flaws, this is still the finest home video rendering of 'Here Comes Mr. Jordan,' so fans shouldn't hesitate to upgrade.

The LPCM mono track "was remastered from a 35 mm magnetic audio track," and the results are quite good. No age-related hiss, pops, or crackles could be detected, and all the clever dialogue is clear and easy to comprehend. Frederick Hollander's music score occasionally sounds a tad tinny, but the saxophone solos exude a lovely warmth and resonance. Fisticuffs and plane engines punch up the soundscape, but this is largely an interior, dialogue-driven film without many sonic bells and whistles. For the most part, the audio is understated and unobtrusive, and it seamlessly complements the on-screen action, which - in this case - is just as it should be.

Though not as packed with supplements as other Criterion releases, 'Here Comes Mr. Jordan' features several noteworthy extras that add context and perspective to this classic film.

Masterfully mixing fantasy, comedy, mystery, and romance, 'Here Comes Mr. Jordan' has been endlessly copied, but never equalled. This light yet substantive tale of a good-natured prizefighter who falls victim to a heavenly clerical error and winds up in purgatory features winning performances from Robert Montgomery, Claude Rains, James Gleason, Evelyn Keyes, and Edward Everett Horton, and makes some thoughtful statements about fate and the resiliency of the human soul. Criterion's Blu-ray presentation isn't quite up to its usual par, but despite a few hiccups, this warm-hearted classic still looks and sounds better than ever. Comedies about death are often hit-or-miss, but 'Here Comes Mr. Jordan' never falters, and 75 years after its initial release, still sits upon an appropriately celestial plane. Highly recommended.

Sale Price 26.99
List Price 39.95
Buy Now
3rd Party 26.99
In Stock.
See what people are saying about this story or others
See Comments in Forum
Previous Next
Pre-Orders
Tomorrow's latest releases