An exciting yet devastating account of a key early World War II battle on a remote Pacific isle, Wake Island depicts the grit, patriotism, and dedication of a brave group of Marines as they fight a relentless Japanese enemy against impossible odds. It takes a while for director John Farrow to rev the story's engine, but once he abandons goofy comedy and thrusts us into the thick of battle, the impact of the real-life events hits home and produces a stirring motion picture. A spotty transfer slightly diminishes Kino's Blu-ray presentation, but strong lossless audio and a solid commentary track win back some points. Despite a Best Picture Oscar nomination, Wake Island may not be the finest World War II film of the period, but it remains a sober reminder of the horrific nature of war. Recommended.

After the Japanese bombed Pearl Harbor and dragged America into World War II, one of the first major battles to test the mettle of U.S. forces began just a few hours later on Wake Island, a tiny slip of land in the middle of the Pacific Ocean between Midway and Guam. The violent siege lasted many days and left dozens of American servicemen and civilians dead. It also produced one of Hollywood's first and most decorated ripped-from-the-headlines World War II propaganda films.

Wake Island, which premiered a mere eight months after the battle, chronicles the dramatic confrontation with grit and a sober reverence for the brave troops who valiantly fought against a formidable, ruthless, and ultimately victorious Japanese army. Director John Farrow mixes stirring battle scenes with sensitive moments that highlight the life-and-death decisions, bonds of brotherhood, emotional fallout, and pain and suffering that define war. Though somewhat hampered by a script that dwells on goofy serviceman antics during its first half hour, the film finds its footing once bombs begin to drop and remains exciting and affecting for the rest of its 88-minute running time.

Developing emotional connections with characters whose lives soon will be in jeopardy is a critical element of war movies, but writers W.R. Burnett (Little Caesar, The Asphalt Jungle) and Frank Butler (Going My Way) focus a bit too much on dorky barracks hijinks to achieve that end. The resulting comedy often falls flat as it feebly attempts to provide some light moments before the barrage of distressing mayhem to come. A chunky Robert Preston and chunkier William Bendix (who would receive an Oscar nod for Best Supporting Actor in only his third film) do what they can with situations better suited to Abbott and Costello than a serious war movie, but they develop a winning chemistry that serves both well as the story progresses. (The screenplay also garnered an Oscar nomination, so you might want to take my criticisms with a grain of salt.) 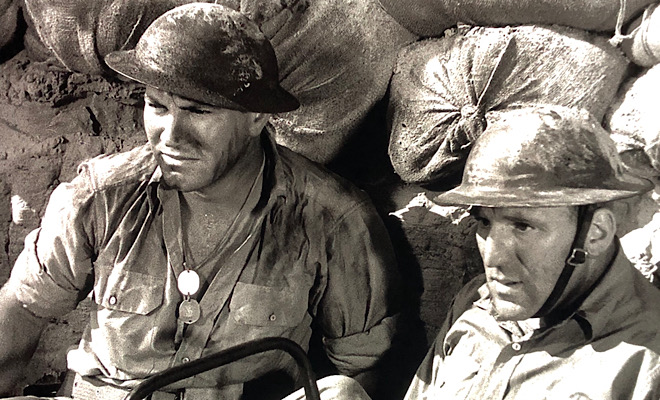 A tedious 33 minutes pass before the Japanese attack, during which time we witness a few of the Marines in Fighting Squadron 211 of Marine Aircraft Group 21, including Maj. Geoffrey Caton (Brian Donlevy) and Lt. Bruce Cameron (Macdonald Carey), departing for the garrison at Wake in early December 1941. A couple of days later, an oily Japanese envoy stops by the island on his way to meet with President Roosevelt in Washington, and not long after, the battalion and a group of American construction workers led by the blustery Shad McClosky (Albert Dekker) learn of the Pearl Harbor assault. A Japanese airstrike on Wake follows hot on its heels, and is piggybacked by an amphibious attack and land invasion. The beleaguered Marines doggedly defend themselves and try to beat back the ever encroaching enemy on land and in the skies, but find themselves tremendously outnumbered.

Hollywood churned out World War II propaganda films with dizzying speed during the early 1940s, but Wake Island stands apart from the pack due to its commitment to realism and authenticity. A prologue states "the action at Wake Island has been recorded as accurately and factually as possible," and for the most part that's not Hollywood hyperbole. Condensing several small battles into one big one is probably the most major bit of historical license the movie takes. Heroics abound, but they're all simple acts performed in the line of duty by dedicated average joes fighting for their country. Yes, they're fictional characters, but in this case - with apologies to the disclaimer that appears in most movies - I'm sure most of them really do resemble actual persons who at the time were either living or dead. And that's why the film still wields such power.

After the slow, meandering first half hour, Farrow moves the film briskly along with exciting battle sequences that cleverly mix location work with models and stock footage, but he doesn't allow the spectacle to eclipse quiet human moments. A scene in which Maj. Caton informs a soldier his wife was killed at Pearl Harbor is especially effective, as is the interaction between Caton and Commander Roberts (Walter Abel), who is wounded in the initial attack. Such exchanges subtly shift the film's tone and heighten the story's impact. 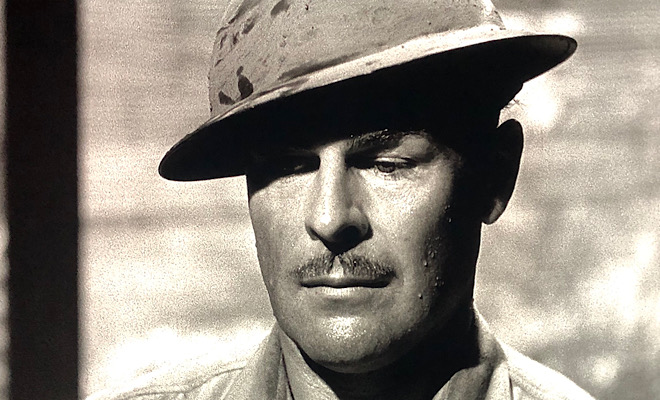 Performances are solid across the board. Donlevy provides appropriate gravitas, exuding both machismo and sensitivity as a man caught in a desperate situation. Preston and Bendix do their best to rise above trite material early on, but later shine in their moments of valor, as does the underrated Carey as a dashing pilot who volunteers for an especially dangerous mission.

Most likely due to patriotic fervor and its uncompromising treatment of a devastating national episode, Wake Island earned both Best Picture and Director nominations. (Interestingly, an intimate portrait of the British war effort - Mrs. Miniver - won both awards.) Farrow's film isn't any better than some of the other great war movies of the period, but it was one of the first to tackle a topical event and do so without sugarcoating or romanticizing the depiction. The ability of Wake Island to embrace realism while still promoting hope and perseverance deserves commendation, and its mix of action, humor, pathos, patriotism, and propaganda would quickly become the blueprint for future combat chronicles. Elements of Wake Island may be dated, but the story it tells and the brave men who fought and died there should never be forgotten. 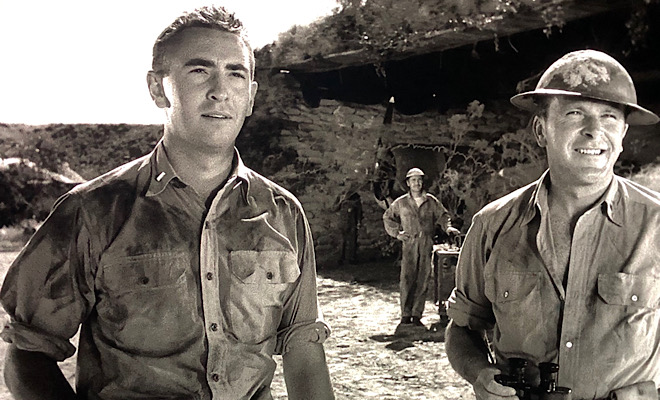 Wake Island arrives on Blu-ray packaged in a standard case. Video codec is 1080p/AVC MPEG-4 and audio is DTS-HD Master Audio mono. Once the disc is inserted into the player, the static menu with music immediately pops up; no previews or promos precede it.

The 1080p/AVC MPEG-4 transfer of Wake Island shows no signs of remastering, so there's a fair amount of evident wear-and-tear. Grain is fairly thick throughout (the vast skies often appear quite noisy) and flurries of scratches and plenty of speckling dot the print. Beneath all that, though, lies excellent clarity and contrast, as well as a healthy grayscale that enhances depth and detail levels. As the movie progresses, the picture improves somewhat, giving us a glimpse of what Wake Island might look like were it given the TLC it deserves.

Blacks are rich, the white clouds are well defined, day-for-night and nocturnal scenes look realistic, and shadow delineation is quite good. A bit of crush creeps in from time to time, but not enough to steal focus. Sharp close-ups highlight glistening sweat, facial stubble, and battle wounds, and explosions and their resulting debris are crisply rendered. Unfortunately, the transfer's rough nature diminishes the impact of the cinematography by two-time Oscar winner William C. Mellor and Theodore Sparkuhl. Hopefully, Wake Island will someday get the restoration it so desperately needs, but until then, this transfer must suffice.

The DTS-HD Master Audio mono track supplies vibrant, detailed sound that really puts us in the thick of battle. Whirring plane engines, exploding bombs and grenades, and the rat-a-tat-tat of machine gun fire are all crisp and distinct, and strong bass frequencies nicely render the resulting rumbles. A wide dynamic scale handles the artillery effects, as well as David Buttolph's rousing music score, without any distortion, and all the dialogue is clear and easy to understand. No age-related hiss, pops, or crackle intrude either. War movies demand potent audio, and this track delivers the goods without breaking a sweat.

In addition to a two-minute re-release theatrical trailer that hypes the film as a depiction of "14 days that America will never forget," the only extra on the disc is an audio commentary with filmmaker/historian Steve Mitchell and author Steven Jay Rubin. The two men share a nice rapport, and their infectious enthusiasm for Wake Island fuels their discussion. The pair talk about the movie's various locations, share geographical and historical information about Wake Island, point out historical inaccuracies, and delve into the brutal treatment of American POWs by their Japanese captors. They also debate the nature of war then versus today, chat about the careers of Bendix, Donlevy, Carey, Preston, and Farrow, and address the film's propaganda elements. If you're a fan of war movies, you'll get a lot out of this interesting track.

One of the most decorated war movies made during World War II, Wake Island still packs a potent punch as it depicts a valiant struggle by U.S. Marines to defend a key Pacific isle in a pivotal confrontation just days after the Japanese attack on Pearl Harbor. Goofy, dated comedy scenes dominate - and derail - the first half hour of the film, but the battle's historical gravity, as well as fine performances and direction, put it back on track. A spotty video transfer diminishes the appeal of Kino's Blu-ray presentation, but a bold lossless audio track immerses us in the violent confrontations and an involving commentary track supplies welcome context and perspective. Wake Island may not have stood the test of time as well as other World War II films of the period, but it's still an important genre entry that deserves attention. Recommended.