Kino brings the long-neglected Backlash to the forefront with a strong video transfer, robust audio, and an engaging commentary track. This Technicolor John Sturges western may not rival some of the director's bigger, more famous spectacles, but it draws us in with a layered plot packed with psychological overtones and mystery/film noir accents. Richard Widmark and Donna Reed create plenty of fireworks in this rugged tale of greed and revenge that western aficionados will certainly enjoy rediscovering. Even those who aren't diehard fans of the genre will find Backlash well worth a look.

Good vs. evil and right vs. wrong have always defined the Hollywood western, but after World War II, simple stories about cleaning up corrupt frontier towns and resilient settlers bravely defending their homesteads suddenly seemed too black-and-white for a contemporary world mired in a sea of gray. To remain relevant, westerns began stepping up their game in the late 1940s, often adding provocative subtexts with a psychological slant and adopting an edgier style thick with film noir elements in an effort to keep audiences interested. Underlying themes as diverse as McCarthyism, homosexuality, feminism, racism, and the nature of masculinity infused the genre with complexity and gravitas while raising the dramatic stakes of many films. Good still battled evil, but the rules of the game weren't nearly as rigid...and the outcome wasn't always guaranteed.

Backlash is a poster child for this type of "Freudian" western. On its surface, director John Sturges' film seems like a typical gold rush yarn modeled after The Treasure of the Sierra Madre, but it quickly becomes apparent there's more to this rugged brew than meets the eye. Unanswered questions abound after Jim Slater (Richard Widmark) encounters Karyl Orson (Donna Reed) at a remote, deserted mining outpost near Silver City, New Mexico in 1870. A group of six prospectors, including Jim's father and Karyl's husband, hoped to strike gold there and share the spoils, but one of them betrayed the others, resulting in an Apache massacre that left five of them dead. The identity of the lone survivor - and his economic status - remains a mystery, and both Jim and Karyl, when they're not bickering and trying to hide their mutual attraction, spend the rest of the movie trying to solve it.

Their journey takes them to Tucson, Arizona, and along the way, we learn the gruff, macho Jim harbors some hurt and resentment stemming from his father's desertion when Jim was just a baby, and we discover Karyl's marriage was hardly a bed of roses either. Scars from the Civil War - and the degradation she had to endure to stay alive - have given Karyl a tough skin, as well as a chip on her shoulder that helps her fearlessly face her foes in a rough-and-tumble man's world. 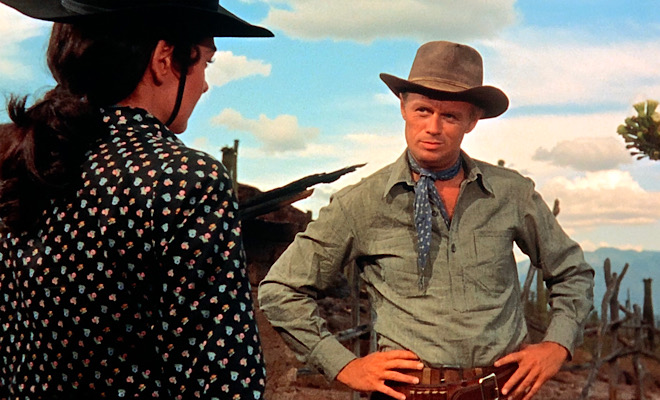 Though not nearly as well known - for good reason - as Sturges' western masterpiece Bad Day at Black Rock, produced the previous year, Backlash is an entertaining, often exciting, but ultimately undistinguished western that's fueled by potent themes, an intriguing mystery that keeps us guessing, and plenty of noir accents. Its plot meanders, but a punchy script by Borden Chase (Red River, Winchester '73, Bend of the River)  features enough colorful characters and snappy dialogue to keep us engaged while we wait for the climactic showdown. Location shooting in Tucson, where temperatures reportedly topped 107 degrees, lends the movie essential authenticity, and the spirited performances from the fine cast enliven the film at every turn.

Widmark projects his trademark toughness as Slater, but it's his tender moments with Reed and flashes of vulnerability that make the strongest impression. Always a relatable everyman, even when playing despicable thugs, Widmark anchors the film with quiet confidence and fleshes out a sketchily drawn character. It's not often Widmark got the chance to play a romantic lead, and he makes the most of the opportunity, meshing well with Reed, who brings plenty of spitfire and steely will to her part. As the only woman in the film, she more than holds her own, going toe-to-toe with all the brusque cowboys who try to dominate her. Reed was often so sweet and perky during her screen and television career it's a treat to see her pout for a change and bring a dash of feminism to a largely chauvinistic genre. 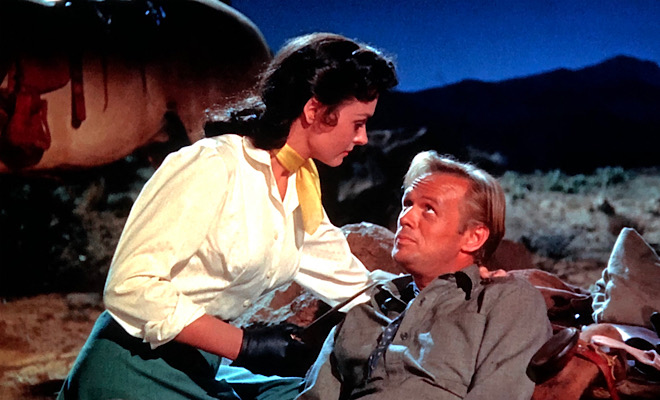 A number of good character actors populate the supporting cast, including John McIntire, Barton MacLane, Harry Morgan, and Edward Platt, and as a cocky young buck aptly named Johnny Cool, William Campbell flashes his toothy grin while itching to exercise his six-shooter. The lively turns spice up the proceedings whenever the plot sputters, but when the story reaches the home stretch, it sprints to an exciting and satisfying conclusion.

Sturges often favors character over action and keeps the focus intimate, although he makes excellent use of the Arizona locations. The sweeping landscapes nicely fill the widescreen frame and enhance the movie's scope, while a mobile camera often puts us in the thick of the action.

Though Backlash pales when compared to such acclaimed and beloved Sturges' westerns as Gunfight at the O.K. Corral and The Magnificent Seven, it stands as a solid warm-up for those iconic films. This textured drama showcases Sturges' understated style without sacrificing excitement, and gives its viewers plenty to chew on while they wait for good to triumph over evil and right to vanquish wrong. 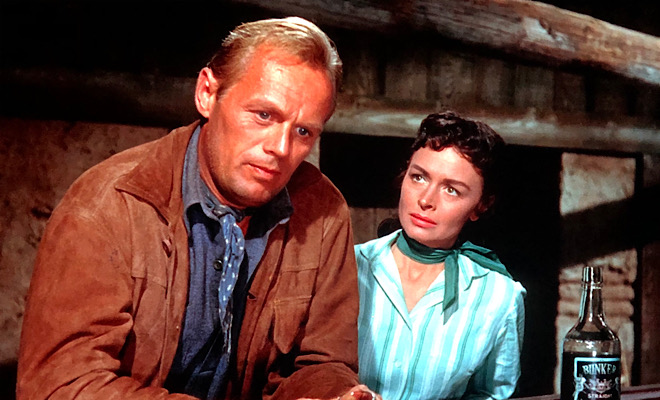 Backlash arrives on Blu-ray packaged in a standard case. Video codec is 1080p/AVC MPEG-4 and audio is DTS-HD Master Audio mono. Once the disc is inserted into the player, the static menu with music immediately pops up; no previews or promos precede it.

Presented in the rather odd but still pleasing 2.00:1 aspect ratio, Backlash looks quite good on Blu-ray, thanks to a vibrant, often lush 1080p/AVC MPEG-4 transfer that nicely renders Irving Glassberg's Technicolor cinematography. Noticeable but not overwhelming grain supplies texture and maintains the feel of celluloid, while excellent contrast and clarity enhance depth and detail levels. A bit of a reddish push that lends flesh tones an unfortunate orange hue predominates, but on the whole, colors remain true and vibrant. The crystal blue sky looks rich and deep, the browns of adobe walls and leather jackets exhibit lovely variations of tone, and the firs and cacti of the forest and desert nicely render shades of green. Though sometimes the Technicolor overwhelms the image and brings an extra layer of artifice to the tale, it's still more of an asset than a detriment to this outdoorsy film.

Black levels are lush, day for night scenes look realistic, and shadow delineation is quite good. Some speckling dots the print from time to time and an annoying red scratch on the lower right of the frame pops up repeatedly early in the film, but overall, the source material is in very good condition. Despite a few flaws, the Backlash transfer pleases on a variety of levels and makes this classic western look better than ever.

The DTS-HD Master Audio mono track outputs robust yet nuanced sound. Sonic accents like gunshots and galloping horse hooves are crisp and distinct, while subtleties like the gentle flow of a desert stream supply essential notes of atmosphere. A wide dynamic scale handles all the highs and lows of Herman Stein's dramatic music score without any distortion. All the dialogue is clear and easy to comprehend, and no age-related hiss, pops, or crackle intrude.

In addition to the movie's original theatrical trailer and a bunch of previews for other related Kino releases, the only extra is a very good audio commentary by film historian Samm Deighan. Deighan expresses a fondness for Backlash, calling it an underrated psychological western. She talks about how traditional western themes evolved to fit the realities of post-World War II and Cold War America, the Freudian and film noir aspects of the plot, and the role of women in psychological westerns in general and Backlash in particular. Deighan also discusses Donna Reed's screen persona, pays tribute to Widmark, examines the work of director John Sturges, denotes censorship issues, and divulges an original, more transgressive ending that was scrapped before production began. If you're a western fan, you'll enjoy this substantive, reverential track.

Backlash will never be regarded as one of director John Sturges' best films, but this efficient, engrossing Technicolor western deserves more respect than it's gotten over the years. Freudian overtones add spice to a story that more often resembles a mystery or film noir than a traditional western, and both Richard Widmark and Donna Reed file spirited, gutsy portrayals. A vibrant video transfer, strong audio, and a solid commentary track enhance Kino's Blu-ray presentation that breathes new life into this often overlooked outdoorsy drama that western fans will find well worth a look.