An old flame shakes the foundation of a solid 20-year marriage in There's Always Tomorrow, a surprisingly insightful and effective domestic melodrama that focuses on the mid-life crisis of a devoted husband and father. The familiar, clichéd story gets a big boost from a terrific Barbara Stanwyck performance and sensitive direction by Douglas Sirk, who subtly examines several familial issues with acuity and warmth. Kino's Blu-ray presentation features very nice video and audio transfers and a first-class commentary track, all of which enhance this tender tale of rekindled love, loss, and affirmation. Highly Recommended.

There's Always Tomorrow is that rare woman's picture that focuses on a man. Instead of treading familiar territory and addressing the emotional turmoil, unfulfilled desires, and restless spirit of a frustrated wife or beleaguered career woman, this slick, affecting drama turns the tables and chronicles the mid-life crisis of a seemingly content family man who suddenly questions the worth of everything he's worked for and valued over the course of his life. It's a clever and intriguing twist, and Douglas Sirk is one of the few directors capable of pulling it off.

Sirk specialized in suburban psychodramas, and though There's Always Tomorrow remains a forgotten stepchild when compared to such Sirk blockbusters as All That Heaven Allows and Imitation of Life, it covers some of the same terrain and deserves more attention than it's received over the years. Insidious gossip, domestic and suburban toxicity, and the false notion of the "perfect" American family are just some of the themes this insightful film explores within the context of a rather banal story.

The old flame darkening a happily married man's door and rekindling long dormant passions is a tale as old as time. Usually, the allure and excitement of extramarital sex leads the upstanding man astray, but in There's Always Tomorrow, the attraction between Clifford Groves (Fred MacMurray) and Norma Vale (Barbara Stanwyck) is largely emotional. When Norma, an established dress designer who's never found fulfillment in her personal life, unexpectedly drops by Cliff's home while on a business trip just to say hello, she catches him at a critical moment of vulnerability. His devoted wife Marion (Joan Bennett) continually puts the needs and desires of their three children ahead of his, and the kids, who are old enough to know better, take their dad for granted as well. Cliff is obviously loved, but years of toiling unselfishly for his family only to be unintentionally yet constantly spurned, ignored, and denied any expressions of affection at last take their toll and bring the lonely man to his breaking point. 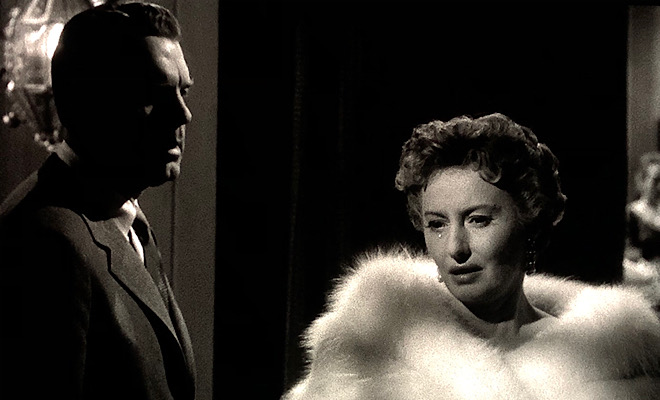 Norma symbolizes what Cliff wants so desperately...and it's not sex. Warmth, kinship, caring, understanding, and fun are just a few of the gifts Norma gives Cliff after she runs into him a second time at a desert resort where she's attending a conference and he's vacationing alone after a minor family mishap keeps Marion at home. Yet when Cliff's son Vinnie (William Reynolds) brings his girlfriend Ann (Pat Crowley) and a couple of friends out to the resort for a surprise visit, he overhears Cliff and Norma laughing and espies Norma giving Cliff a friendly kiss on the cheek. Of course he jumps to the wrong conclusion, and when he shares his suspicions of an illicit romance with his sister Ellen (Gigi Perreau), the two brand Norma a predatory temptress out to break up their parents' storybook marriage. Nothing could be further from the truth, but their subsequent meddling just might make their imagined nightmare a reality.

There's Always Tomorrow is one of those the-grass-is-always-greener, we-want-what-we-can't-have, and we-don't-appreciate-what's-right-under-our-nose kind of movies. It's a story about mature people who act in a mature manner, and it speaks most profoundly to a mature audience. You won't see impulsive actions causing irreparable, over-the-top consequences here. Cliff and Norma weigh the pros and cons of their desires in a measured manner. They realize the magnitude of their situation and debate how even the perception of an affair would affect both of their well ordered, complicated lives.

Like many Sirk melodramas, gossip, innuendo, and judgmental attitudes drive the action, infect the environment, and force the characters into conflicts. The willingness and eagerness to think the worst of people without any evidence and despite years of impeccable, upstanding behavior is one of the film's most potent themes. In Double Indemnity, the most famous of the four movies Stanwyck and MacMurray made together, Stanwyck plays a devious, rotten-to-the-core femme fatale, and ironically that's exactly what Cliff's impressionable children think she is here, because of one innocent kiss. 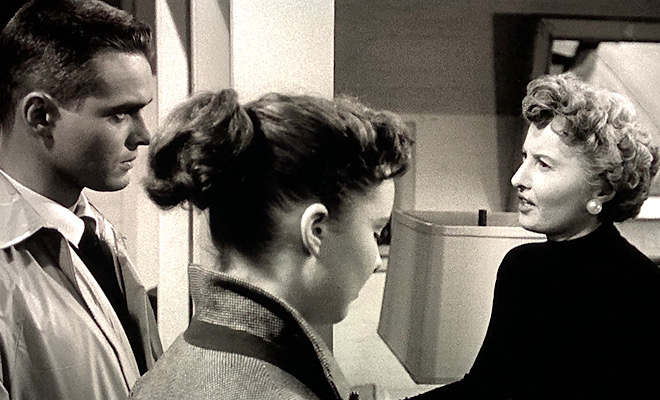 Stanwyck's ability to take clichéd material and cardboard roles and make them fresh, natural, and immediate never ceases to amaze me. The jaded, lonely career woman tends to be a one-note role, but Stanwyck adds subtle shadings to help us understand and respect her. Like Cliff's children, we want to hate Norma, but Stanwyck brings so much dimension to the part it's impossible to bear her any ill will, and in the end, she's the one who gains the lion's share of sympathy. While it's easy to sink one's teeth into a juicy role, Stanwyck has the uncanny ability to spice up bland parts, which is why she is arguably the finest actress of Hollywood's Golden Age.

In an equally strong performance, MacMurray makes us feel Cliff's restlessness, ennui, frustration, and resentment, and how his family's casual dismissal of him eats away at his soul. As the oblivious, self-absorbed wife, Bennett shines, putting a dramatic spin on the perfect wife on steroids she played a few years earlier in Father of the Bride. It's a thankless role, but she makes something of it. Reynolds, who would play a similar part the following year in Sirk's All That Heaven Allows, impresses as the insufferably holier-than-thou son, as does Pat Crowley as his far more level-headed and mature fiancée.

Dated elements occasionally hamper There's Always Tomorrow, but its core themes are timeless. Who doesn't think about the what-ifs of life and wonder if the decisions we made were the right ones? Who doesn't yearn for the excitement and recklessness of youth as the clock ticks and middle age engulfs us? Sirk delicately examines these all-too-identifiable emotions while painting a cynical portrait of that bastion of American lore, the middle-class suburban family. In other hands, There's Always Tomorrow might seem trivial and trite, but Sirk, Stanwyck, and MacMurray make this all-too-identifiable tale resonate and endure. Along with All I Desire, another Sirk-Stanwyck gem recently released on Blu-ray by Kino, There's Always Tomorrow deserves to be rediscovered and appreciated anew. 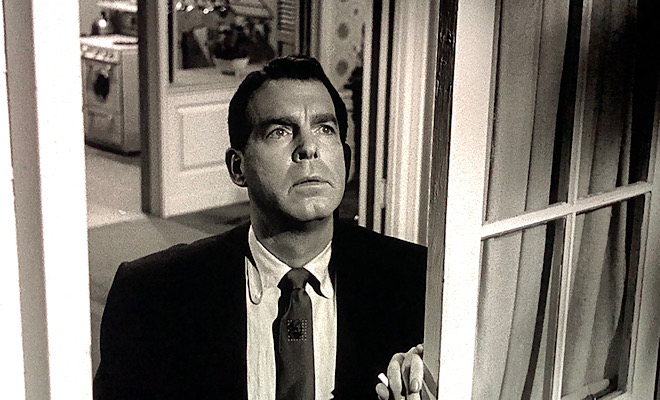 There's Always Tomorrow arrives on Blu-ray packaged in a standard case. Video codec is 1080p/AVC MPEG-4 and audio is DTS-HD Master Audio 2.0 mono. Once the disc is inserted into the player, the static menu with music immediately pops up; no previews or promos precede it.

The 1080p/AVC MPEG-4 transfer beautifully renders the black-and-white cinematography of the esteemed Russell Metty, who would also work with Sirk on such legendary Technicolor films as Magnificent Obsession, All That Heaven Allows, Written on the Wind, and Imitation of Life. Clarity, contrast, and grayscale are all excellent, but an abundance of grain occasionally draws attention away from the story and performances, despite lending the picture an authentic film-like feel. Black levels are appropriately rich, Stanwyck's white furs exude plenty of fine detail, shadow delineation is good, and costume textures are nicely rendered. All three stars are decidedly middle-aged, and despite the softer treatment both Stanwyck and Bennett receive, the sharp close-ups are unforgiving in their depiction of facial lines and wrinkles. Though There's Always Tomorrow doesn't seem to have undergone any restorative work prior to this Blu-ray release, the source material appears surprisingly clean, resulting in a fluid and seamless visual experience.

There's Always Tomorrow is a dialogue-driven film, and the DTS-HD Master Audio 2.0 mono track prioritizes the all-important verbal exchanges above else. All the conversations are clear and easy to comprehend, and Stanwyck's throaty vocal timbre sounds rich and resonant throughout. Rain plays a big role in the proceedings, and the California downpours provide aural shadings for several scenes, enhancing the turbulent emotional atmosphere without overwhelming it. A wide dynamic scale handles all the sweeping highs and dire lows of the movie's music, supplied by Heinz Roemfeld and Herman Stein, without any distortion, and no age-related hiss, pops, or crackle interrupt any of the telling silences that punctuate the drama. Audio doesn't play a major role in There's Always Tomorrow, but this track rises to any and all challenges when it's called upon to do so.

In addition to the film's two-minute, highly melodramatic original theatrical trailer and several previews for other Stanwyck and Sirk movies, the only other extra is an audio commentary by film critic Samm Deighan. Deighan gets under the film's skin, identifying its subversive themes, espousing the interesting idea that children are the villains in the story, and relating the narrative to America's social climate at the time. She also talks about the initial dismissal of Sirk's films by contemporary critics, defends Sirk's penchant for exploring the dark side of American domesticity, praises the film's realism and understated presentation, and lauds the performances and script. If you're a fan of this Stanwyck-Sirk classic, you'll definitely want to give this intelligent, engaging track a listen.

It's not easy to make clichéd material seem fresh, but director Douglas Sirk tries his best - and often succeeds - in There's Always Tomorrow by injecting sensitivity, warmth, and insight into a familiar triangle tale. Barbara Stanwyck proves yet again why she's arguably the finest actress of Hollywood's Golden Age, and Fred MacMurray and Joan Bennett also file natural, affecting portrayals in a slice-of-life family drama that puts honesty before histrionics. Solid video and audio transfers and a stellar commentary track distinguish Kino's Blu-ray presentation, which revives a long-neglected film that deserves to be rediscovered. Highly Recommended.