A surprisingly resonant domestic trifle about a wayward actress who returns home to reconcile with the husband and family she abandoned years ago, All I Desire benefits from a stellar Barbara Stanwyck performance and expert direction from melodrama master Douglas Sirk. Both artists transform the cliched material into something special and make this 80-minute drama well worth one's time. Kino honors their efforts with strong video and audio transfers and an absorbing commentary track, all of which make it a pleasure to rediscover this long-neglected and undervalued gem. Highly Recommended.

Douglas Sirk defined the 1950s melodrama with a string of big, bold, Technicolor films that scrub off suburbia's shiny veneer to expose the disaffection, hypocrisy, and petty manipulations lurking beneath. Yet it was a little, modest, black-and-white period tale that helped this impeccable craftsman find his niche, enrich his reputation, and gain the opportunity to direct such future classics as Magnificent Obsession, All That Heaven Allows, Written on the Wind, and Imitation of Life.

On its surface, All I Desire sounds like a syrupy, sudsy, homespun drama worthy of only minimal attention, but in the hands of Sirk and star Barbara Stanwyck it morphs into a deeply affecting ode to the strength and resilience of the American family. It's also a surprisingly astute portrait of a woman who realized early in life she couldn't have it all...and paid a dear price for choosing her own dreams and a life of independence over caring for her husband and children in an oppressive, close-minded environment. The second of 11 films Sirk would make with producer Ross Hunter, All I Desire lacks the gloss and especially the renown of their future collaborations, but its refreshing simplicity, intimacy, and warmth help it strike a more relatable chord.

When wayward wife and mother Naomi Murdoch (Stanwyck), who a decade earlier traded her young family and stifling existence in a small Wisconsin town for the bright lights and glamor of a theatrical career, receives an out-of-the-blue letter from her estranged 18-year-old daughter imploring her to come home and attend her senior play, she initially resists the temptation. Life hasn't worked out the way Naomi planned, and now the cynical, middle-aged showgirl who's listed on the bottom of vaudeville bills - often below dog acts - worries she can't live up to her family's lofty vision of her as a successful Shakespearean actress...an image she perpetuated in numerous letters to her secret family liaison, housekeeper Lena Swenson (Lotte Stein). 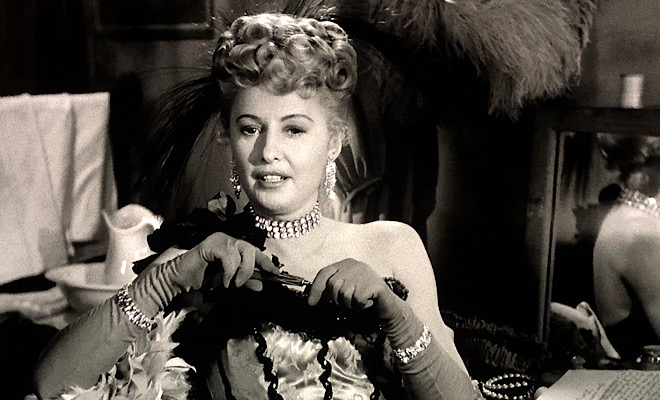 Curiosity, though, gets the better of Naomi. She sinks the last of her meager savings into a fancy wardrobe so she can look like a star and heads back home to Riverdale, the tiny, uptight, oh-so-judgmental village that frowned upon her impulsive actions and tried to quash her wild spirit years ago. Her worshipful daughter Lily (Lori Nelson), who wrote the letter and hopes to follow in Naomi's footsteps, is thrilled to see her, but the same can't be said for her quiet, dignified husband Henry (Richard Carlson) and eldest daughter Joyce (Marcia Henderson), who's taken Naomi's place as lady of the house. Both bitterly resent Naomi's abrupt, unexplained abandonment and worry her return will once again disrupt their lives. Naomi must also introduce herself to her 10-year-old son Ted (Billy Gray), who was only a baby when she left and has ironically bonded with Dutch Heineman (Lyle Bettger), the rugged rascal with whom Naomi dallied before she fled Riverdale.

Plenty of family tension ensues as Naomi attempts to break the ice, repair the relationships she brutally fractured, and win back the love and respect she lost. She must also try to resist the still potent allure of the roguish Dutch, who's all too willing to pick up where they left off, and finesse Henry's tepid, comfortable romance with Sara Harper (Maureen O'Sullivan), the sweet, spinsterish school drama teacher who possesses all the gentle qualities the fiery, vivacious Naomi lacks.

All I Desire may take place in a rural town in 1910, but the striking parallels to 1950s suburbia keep the story relevant. Naomi refuses to conform to Riverdale's small-minded ideals or accept the boundaries of traditional family life, and though the townspeople continue to pass judgment, her family begins to understand her complexities and forgive her imperfections. Much of the film is a push-and-pull between family and career and the small town and big city, and Naomi is caught in the middle. Women then, women in the 1950s, and many women today still must choose one or the other, and All I Desire incisively depicts that often agonizing decision. 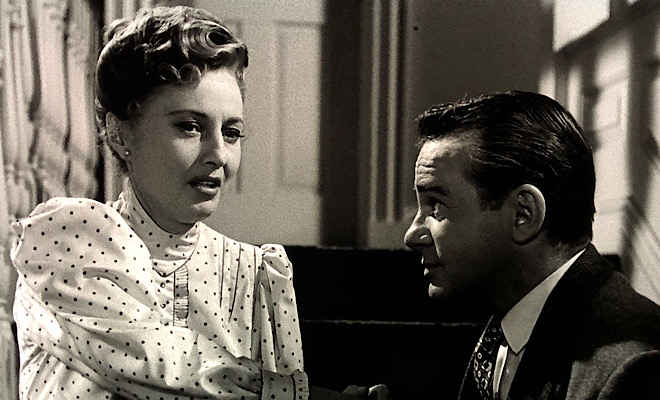 The black-and-white film stock might have been a cost-cutting measure for this low-budget movie, but Sirk uses it to his advantage. He and cinematographer Carl Guthrie often lend All I Desire the look of a film noir, with shadowy photography and tightly shot intimate exchanges producing a feeling of entrapment and claustrophobia. Such a style emphasizes the asphyxiating nature of small-town society and how it can choke those who can't escape its grasp. It's just a shame Sirk couldn't shoot the realistic, you-can't-go-home-again ending he desired and had to bow to Hunter's rosier view of life and more commercial artistic perspective. The ending is certainly an audience pleaser, and Sirk and Stanwyck make it work, but it only partially rings true.

All the acting is first-rate, but All I Desire is unequivocally Stanwyck's film. The legendary actress and four-time Oscar nominee files one of her best performances, and that's saying something. Spirited yet understated and brimming with honest emotion, her nuanced work often provokes a visceral response. Stanwyck's expressive face speaks volumes about Naomi's character, and some of her telling close-ups transmit as much feeling and intensity as the close-ups that helped define two of her greatest triumphs, Stella Dallas and Double Indemnity. Though the rest of the cast isn't particularly well known (with the exception of O'Sullivan and Richard Long, who a dozen years later would play Stanwyck's oldest son on the TV series The Big Valley), Stanwyck helps them raise their game, and her final scene with the young Gray (best known as Bud on the long-running TV sitcom Father Knows Best) is a real heartbreaker.

All I Desire always seems as if it's about to go off the rails and careen into soap opera territory, but thankfully Sirk keeps the film on track. His commitment to quality and Stanwyck's riveting portrayal elevate this textured domestic tale, which has flown under the radar for far too long. Hopefully, this Blu-ray release will garner this underrated movie the attention and respect it has always deserved.

All I Desire arrives on Blu-ray packaged in a standard case. Video codec is 1080p/AVC MPEG-4 and audio is DTS-HD Master Audio 2.0 mono. Once the disc is inserted into the player, the static menu with music immediately pops up; no previews or promos precede it.

Despite the lack of any restorative work, the 1080p/AVC MPEG-4 transfer for All I Desire looks quite good. Excellent clarity and contrast produce a vibrant image with plenty of depth and detail. (It's easy to pick out Stanwyck's double driving a horse and buggy in long shots.) Evident but not distracting grain enhances the air of nostalgia that swirls about the narrative while lending the picture a lovely film-like feel, and though errant speckles and faint vertical lines plague the print throughout, they rarely steal attention from the engrossing narrative. Blacks are rich, the bright whites never bloom, and superior shadow delineation keeps crush at bay most of the time. The especially sharp close-ups wonderfully showcase the careworn faces of Stanwyck, Carlson, and O'Sullivan, and costume and upholstery fabrics exude plenty of texture. While this simple, affecting, often artistically shot film deserves a full restoration, this very nice rendering more than suffices and makes All I Desire look better than ever before.

The DTS-HD Master Audio 2.0 mono track supplies clear, well-modulated sound without any age-related hiss, pops, or crackle. The string-laden, occasionally melodramatic music score that's dominated by a beautiful theme written by David M. Lieberman fills the room with ease, and a wide dynamic scale embraces all of its highs and lows without any distortion. Sonic accents like galloping horse hooves and gunshots are distinct, and all the dialogue - with the exception of some lines spoken by German actress Lotte Stein in a thick Swedish accent - is easy to comprehend. For a low-budget film, this track is surprisingly robust and nicely complements the visuals.

In addition to a one-minute trailer for All I Desire that looks suspiciously like a TV spot - as well as a slew of trailers for other Stanwyck, Sirk, and Carlson films - the only supplement is an audio commentary by film historian Imogen Sara Smith. This is the first commentary I've heard since the beginning of the pandemic that really betrays the limitations put upon us, but you've got to hand it to Kino for proceeding with these essential commentaries despite the inherent challenges. Obviously recorded remotely, there's a hollowness of tone that makes Smith sound as if she's situated at the bottom of a well. Her remarks are a bit difficult to understand as a result, but once you get past the initial weirdness of it all, you can concentrate on Smith's cogent insights that help contextualize this fine film.

Smith, as she should, spends a great deal of time talking about Stanwyck and Sirk, praising and analyzing their respective talent, styles, and appeal. She also discusses the film's narrative themes, provides bits of trivia and biographical information (she mentions Sirk and producer Ross Hunter often found themselves at odds despite their successful and enduring partnership), and talks about how All I Desire fits into the 1950s Hollywood canvas. Though her remarks often sound a bit too polished - she's obviously reading from a prepared script - Smith is one of the smartest and most astute classic movie commentators, and her participation here is a big asset to this disc.

Some might classify All I Desire as a typical woman's picture, but melodrama master Douglas Sirk and screen legend Barbara Stanwyck elevate the humble, cliched material and transform it into something special. Emotional resonance abounds in this period domestic drama about a turn-of-the-century actress who returns to her small-town home to make amends with the family she abandoned years ago to pursue her dreams. Strong video and audio transfers and an insightful commentary track distinguish Kino's Blu-ray presentation of a little-known Stanwyck gem that at last is getting the attention it so richly deserves. Highly Recommended.