The Masque of the Red Death

Horror icon Vincent Price enjoyed a long career celebrating the macabre with a vast array of devilishly entertaining films. Teaming up with Roger Corman, Price was given several opportunities to delve into the mad writings of Edgar Allan Poe - their best collaboration being 1964’s The Masque of the Red Death. Previously released as part of the previously out-of-print Vincent Price Collection vol. 1 - that set has now been reissued with this film given its own solo release with a gorgeous new transfer, excellent audio, and some new bonus features. If you’re a fan of the film, it doesn’t get much better than this - Highly Recommended

For this review, we’ll also be looking at a Check Disc of the Studio Canal U.K. release which utilizes the same restoration but offers a different audio mix and a different set of bonus features.

A deadly pestilence known as “The Red Death” is ravaging all of Italy. With all his greed and power, Prince Prospero (Vincent Price) has kidnapped the young maiden Francesca (Jane Asher), plundered the harvest of the villages, and has invited all of the nobles to his castle to shelter from this plague. With all the food, wine, and merriment at hand, Prospero promises a masquerade ball that will rival any in memory… but the Red Death stalks the land and not even Propero’s great castle is immune. 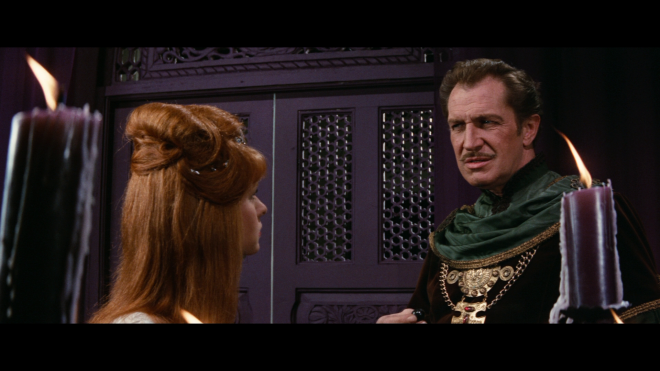 I grew up reading Edgar Allan Poe stories and loved every one of them. When I was little, we had a kid’s picture book of Poe stories like The Raven and The Masque of the Red Death stripped down to simple pictures and phrases. I was never an easy kid to scare so I gobbled up these grim tales. My dad also had a knack for renting great classic horror movies every weekend and Vincent Price was a staple in my movie-watching diet. The Masque of the Red Death has always been a favorite. I’d put it up there as one of the most faithful and best-executed Poe adaptations. Not only is it a great adaptation, but it’s also probably Roger Corman’s best film.

Corman mounted Poe adaptations - most with middling to decent results. Often, as was the case with The Raven, they were based on Poe’s short stories or poems and required a lot of additional padding. Some were gloriously gory classics, others were just plain silly. Masque was a different breed altogether. Made in England outside of Corman’s usual cadre of up-and-coming filmmakers and actors, The Masque of the Red Death doesn’t look or feel cheap. It was - there are numerous recycled sets, props, and costumes from other English productions - but the assembly of the elements along with a great cast make for an impressive production.

This is also a case where Corman went for a more cerebral approach instead of his usual schlocky quick shock gore horror - until the end! The reveal of the man in red and Prospero’s madness remains one of the most haunting and eerie moments of Corman’s horror output. With the smart adaptation from writers Charles Beaumont and R. Wright Campbell, we have not one but two Poe adaptations in a single film. Blending Masque of the Red Death with Poe’s short story Hop-Frog, we have a thematically rich film. 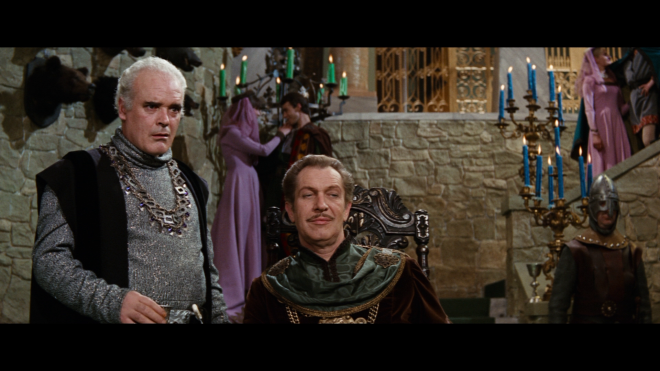 In this adaptation, the dancing dwarf is now called Hop Toad (Skip Martin) and his lover Esmeralda (Verina Greenlaw) get their revenge on the creepy leering Alfredo (Patrick Magee). By adding this story into The Masque of the Red Death we get a delightfully horrifying “eat the rich” form of revenge by the commoners and exploited people who serve Prospero and his party. It’s the perfect lead-in to the grand finale.

In addition to the great scrip and Corman’s smart efficient direction, we get to enjoy the beautiful cinematography of Nicolas Roeg. Every scene is bathed in rich vibrant color with inventive camera angles to give this film a visual edge. Watching this movie you can see how Roeg would approach his own films like The Man Who Fell To Earth, Don’t Look Now, and The Witches. This movie is a visual feast, to say the least.

The Masque of the Red Death is made up of the best efforts of the men and women in front and behind the camera. Corman was at the top of his game. Roeg was a master behind the camera. Vincent Price and the rest of the cast deliver nuanced performances with an impressive screenplay to guide them. This film wasn’t a hit when it released. Again, it’s not the schlocky cheap churn-and-burn material that Corman is known for. It was better and beyond and because of that, it’s probably the most memorable and enduring of his catalog.

Vital Disc Stats: The Blu-ray
Scream Factory gives The Masque of the Red Death another run at Blu-ray. Pressed on a Region A BD-50 disc, this disc is housed in a standard case. The disc loads to an options menu allowing you to choose either the 88-minute cut or the 89-minute cut of the film before arriving at individual animated sub-menus with their own specific selection of bonus features.

Studio Canal’s release of The Masque of the Red Death arrives on Blu-ray in a single-disc set with a 20-page booklet with collectible art cards (we didn’t have access to those physical bonus features). Pressed on a Region-B locked BD-50 disc, the disc opens to an animated main menu with traditional navigation options. Worth noting, this release is supposed to have both cuts of the film, but the Check Disc we were supplied with only had the Extended Cut. Since we don’t have a final release copy on hand, we don’t know if that remained through final production.

Sourced from a full 4K restoration performed in 2018, this is the best The Masque of the Red Death has ever looked - likely even better than the original theatrical release. Compared to the 2013 Blu-ray release, film grain has a finer more organic texture. There isn’t any unsightly edge enhancement present either so frustrating compression artifacts that were present in the last release are absent here. Colors are vivid giving primaries plenty of room to pop.

From the various rooms in Prospero’s castle to the colored candles to the costumes - the color pallet is bold and striking. Flesh tones are also much more healthy-looking instead of the ashy-brown tone they could sometimes appear. This transfer was sourced from the original camera elements and an archival print for the uncut materials and is in much better shape without speckling or the scratches apparent on previous home video releases. This transfer does appear to have been reframed ever so sightly; not a significant margin, but it does appear zoomed out a little bit giving slightly more information around the edges. Black levels and contrast are spot-on giving inky blacks and crisp natural whites without blooming.

Studio Canal’s release of The Masque of the Red Death arrives using the same new restoration master from 2018 as Scream Factory’s release. Both transfers are nearly identical, but since this check disc offered only the 89-minute cut of the film, it hits with a slightly higher bitrate. The Scream Factory disc would max out at around 39mbps where this disc from StudioCanal regularly exceeded 45mbps. For most of the film, there really isn’t much of a visual advantage with such a slight bitrate improvement. However, scenes with a lot of fast camera panning - party sequences and the finale looked a little clearer. Also, textures in Prospero’s green silky cape at around the 22-minute mark held more fine detail. These are near-microscopic nuances and I really only noticed them after essentially watching this movie three times in two days.

This transfer offers the same bold colors with vivid primaries. Deep inky black levels with strikingly crisp whites. This really is a masterful restoration and it shows in every frame. This disc from StudioCanal and the Scream Factory disc easily outpace any previous home video release. 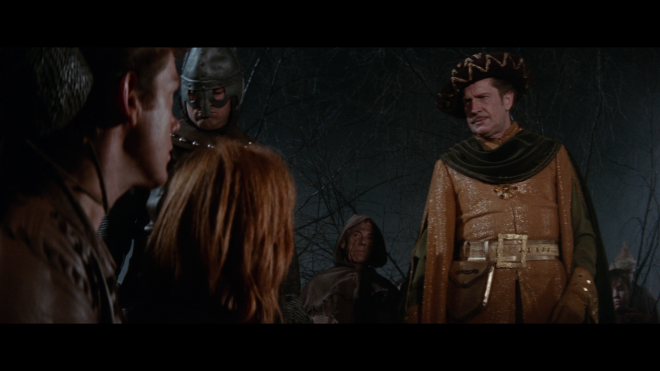 The Masque of the Red Death arrives with a pleasing DTS-HD MA 2.0 mono track that is oddly enough a little softer than the previous release’s mix. You can hear the level shift in the embedded comparison video above. Flipping between discs and playing full scenes, it’s not a dramatic difference, but just enough that I felt the need to pop up the volume a notch or two for this release. Other than that oddity, this is a clean and clear track offering an impressive range to the soundscape. The castle setting offers an immersive atmosphere - especially during the party sequences with a range of voices and background noises to inhabit the screen. Dialog is clear, scoring is on point. It’s just the levels are a little softer so be aware of that when you dive in.

This StudioCanal release opts for an LPCM 2.0 audio mix that in many ways is identical to the DTS-HD MA 2.0 mono track of the Scream Factory release. Dialog is clean and clear throughout. Scoring is excellent and rich, and the film’s active scenes during the opening gathering and Prospero orders everyone to act like animals or the final ball have a rich atmosphere. Levels are solid, I didn’t feel the need to adjust them high as I did the DTS track on the new Scream Factory disc - but that was only a small quibble. Free of hiss or any serious age-related issues this is another terrific audio track.

Part of the reason the first Vincent Price Collection went out of print was because of the vintage introductions that Vincent Price shot for PBS and my understanding is Scream Factory lost the rights to use those. For this new release, we now get an excellent and informative introduction from Stephen Jones for the Extended Cut of the film. Additionally, there's a great selection of bonus content to pick through, the audio commentary with Steve Haberman is an informative track and the interview with Corman is great as he recalls a lot about the production. The Kim Newman and Barry Forshaw commentary are also well worth the listen and is a little more engaging since there are multiple participants.

The StudioCanal release offers its own set of unique features. While Kim Newman does another audio commentary, the big get here is the BFI interview with Roger Corman from 2013 that really is a must-watch segment.

The Masque of the Red Death is a classic. Classic story, classic horror, classic Vincent Price, and classic Roger Corman. As one of the best Poe adaptations and one of Corman’s best films, it’s awesome to see it in such great shape. The transfer is pristine with lush vivid colors that pop off the screen alongside Price’s memorable performance as the diabolical Prince Prospero.

Scream Factory and StudioCanal both deliver an excellent solo release for this one. Depending on where you live, you have a solid Blu-ray upgrade to consider. If you love gothic horror classics, this comes Highly Recommended.

If you're in the UK or if you're a U.S. resident and want to import it, you can order the StudioCanal Blu-ray From Amazon UK