The Flash: The Complete Sixth Season

The Fastest Man Alive speeds towards competent entertainment in The Flash: The Complete Sixth Season. While this season was certainly better than the last couple of seasons, the Crisis storyline certainly spiced things up, but the show is too comfortable and feels like it's on autopilot much of the time. Even without doing anything too new or dynamic, it's reliably entertaining if underwhelming. Warner Brothers delivers all 19 episodes of the sixth season to Blu-ray with a strong A/V presence, some okay bonus features, and the entire 5-episode Crisis On Infinite Earths gets its own bonus disc. If you've made it this far in the series, this is a worthwhile season even if it doesn't reach new heights. For Fans Only

After the death of their speedster daughter Nora, Barry (Grant Gustin) and Nora (Candice Patton)are left reeling. To top things off, The Monitor (LaMonica Garrett) has dropped the bombshell that The Flash's foretold disappearance is coming sooner than expected because of a cataclysmic crisis event that will ensnare every universe within the multiverse. As Barry struggles to deal with the events before and after the Crisis - Team Flash will have to face a new series of threats more deadly than the next while facing their own personal issues. 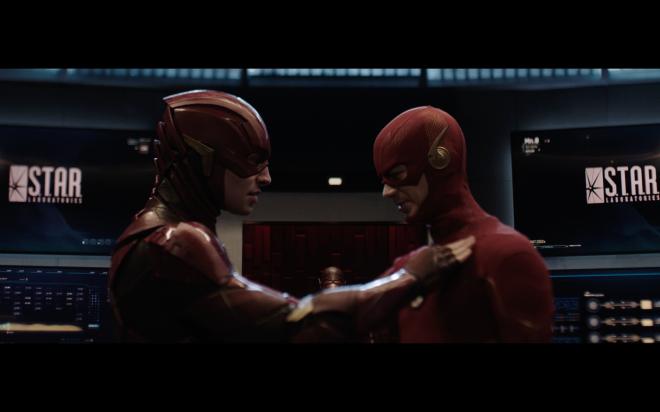 The Flash - like Batwoman - was undone not by an intergalactic force but a global pandemic. Only in this case it actually kinda helped. My ongoing gripe with the CW ArrowVerse - beyond saccharine safe stories and cheesy character cliches - is that each season is entirely too long. I get it they want the ad buys and audience numbers that a long season order would provide, but it comes at the cost of clean storytelling. At 19 episodes this season is shorter than normal - but that's because the pandemic shut things down before the final four episodes could be filmed. Even with a shorter run,  there was still plenty of bloat.

While this isn't a "great" season - it's still better than the last couple. Four was pretty rough and a struggle to finish where Season Five felt like it had some drive. Thanks to the Crisis On Infinite Earths season six has a structure to it that past seasons didn't. Knowing that Crisis was imminent and his disappearance or death was assured - Flash has a purpose to fight for. How to not only prevent the destruction of Earth One and everyone he knows and loves but also how to save his own life. There's at least urgency and structure to that primary storyline that has been missing for a couple of years now. Watching this season of The Flash along with the final season of Arrow is a great setup for the big crossover event and there are interesting repercussions of the outcome. There are even a couple good side villains to keep the series moving towards the seventh season - I'm curious to see how they resolve the Mirrorverse storyline since it was cut short this year.

The big problem for this season, and it's one that's been a problem for a while, is the ever-growing roster of Team Flash participants who all seem to have a lot of stuff going on. Will Cisco Vibe again - or won't he? What will Caitlin do now that Killer Frost is an equal participant in her day-to-day life? How will Joe manage his position as Captain of CCPD while Cecile decides to become a defense attorney for Metahumans since she can detect their guilt or innocence? I haven't even gotten to this show's constant need to find a new way for Tom Cavanagh to appear some version of Wells. Hartley Sawyer has been removed from the series as Elongated Man due to a pretty horrible Twitter history. Seriously, when you get a big gig - probably a good idea to delete your social history. That said, I'm not going to miss him. Occasionally Elongated Man could be good for a joke or two and a fun character, but damn, this supporting cast is stuffed. And they all have arcs now instead of the title character. And that says nothing of characters from other ArrowVerse shows who drop by for a chat.

If The Flash can maintain this upward swing, Season Seven could be pretty decent. I wouldn't put this season up there with the first two, but it's far away better than seasons three and four. With that, it may be a good time to start finding a way to wrap up this series or find a way to shake up the cast for a soft reboot. The biggest problem with the CW DC Superhero lineup is everything is becoming routine. You can miss entire seasons, pick the show up again years later and not feel like you need to go back to watch it all. The show is still entertaining, but it's becoming diverting entertainment. Something you put on in the background that you don't really need to pay attention to.

The Flash: The Complete Sixth Season arrives on Blu-ray in a five-disc Blu-ray + Digital set. Housed in a sturdy 5-disc case with identical slipcover, each disc gets its own tray without being stacked. Each disc loads to a static image main menu with traditional navigation options. Disc Five of the set offers the complete 5-episode Crisis On Infinite Earths crossover event.

While the series may have some iffy episodes - visually it's always maintained a strong presence and this Blu-ray release is no different. Flash's bold red costume with yellow/gold lightning effects offer terrific primary pop for the show. Details are crystal clear offering strong facial features, costuming details, and production design. Black levels are spot on giving the image a nice sense of three-dimensional depth. Some of the CGI effects still look pretty weightless and goofy, but for a show like this they still pull off some impressively seamless effects - it's the full-body renders of Flash or the villains that always look dodgy - but that's been this series, constant companion, for six seasons now. As with past releases, The Flash still cuts a mean rug on Blu-ray.

Again The Flash comes packed with an excellent DTS-HD MA 5.1 mix that offers a lot of great surround sonic activity. That's been one of the best things about the audio of this show is how well they work distinct channel placement. Whenever Flash/Barry has to dash in and out of a scene and back again there's a sound effect that travels through the channels. Likewise bigger action sequences offer distinct channel-specific sound effects. Clean dialog throughout without any issues with scoring or action effects messing with clarity. Music is still overpowering but in a good way - especially for the season premiere where Cisco runs Queen's Flash Gordon theme while Barry zips around the city to close a black hole. That was a fun moment - even after watching the movie nearly a dozen times this month I still get excited at that theme song!

Sadly as with past seasons, the offering of bonus features for The Flash has become smaller and smaller. Now we're down to very brief deleted scenes, gag reels, and the exact same Comic-Con recap that was offered on Batwoman: The Complete First Season. But hey, at last we get Crisis On Infinite Earths on its own disc.

Thanks to the Crisis On Infinite Earths crossover event, The Flash: The Complete Sixth Season had a structure and drive offering a marked improvement over the previous tepid couple seasons. Still hindered by supporting cast bloat, the season could lose a few episodes and not miss a moment. With the pandemic shutting the season down early, it's a shorter season and ends on an interesting cliffhanger to move things into Season Seven. The show is still predictable fun - but it may be time to consider wrapping things up. Warner Brothers brings The Flash: The Complete Sixth Season to Blu-ray in fine order sticking with tradition for a strong A/V presentation for each episode. Bonus features are slim at best but this set does come with the complete Crisis On Infinite Earths crossover on its own disc. If you've made it this far, you're probably still rooting for Team Flash. If you're new to the show - this isn't may the best jumping-in point. For Fans Only.