An important agenda, lofty ambition, decent and able talent in front and behind the camera does not a great television series make. Ruby Rose's tenure as Batwoman has been tumultuous, to say the least. With the pandemic shutting down production, her on-set injury, and sudden recasting, Season One of this show is all but pointless now. The start of the season was rough but it got better as it found its legs but too little too late. Warner Brothers delivers a first-rate Blu-ray release of Batwoman: The Complete First Season with an excellent A/V presentation along with some anemic bonus features but comes with a disc dedicated to the Crisis On Infinite Earths 5-episode crossover event. The shame of this series is it abruptly ends just when it was starting to get pretty good. For Fans Only.

Batman hasn't been seen or heard from in years. In the absence of his protection, Gotham has turned to the Crows - an elite contract law enforcement team headed by Jacob Kane (Dougray Scott). Outmanned and outgunned by the city's worst, Kate Kane (Ruby Rose) is called back home when her former lover and Crows second in command Sophie (Meagan Tandy) is kidnapped by the deranged Alice (Rachel Skarsten). With the help of Luke Fox (Camrus Johnson), Kate will become the new icon of the city, a protector Gotham desperately needs to believe in - Batwoman, even if becoming a masked vigilante puts her in the crosshairs of her father and the Crows. 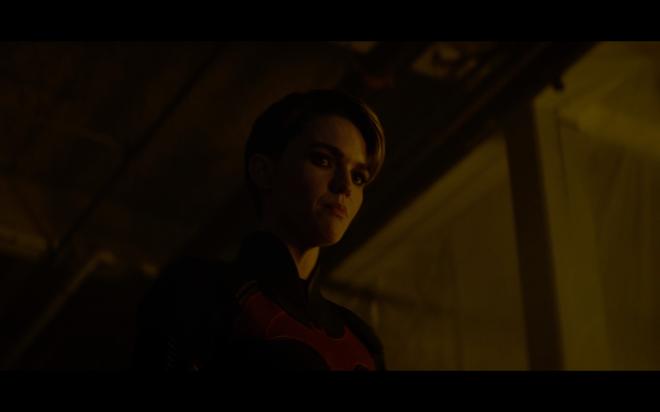 I honestly hope someday soon we get all of the juicy details of what the hell happened behind the scenes of this show. It'd make for one hell of a movie or tell-all book! After Ruby Rose landed a decent enough debut in the CW Elseworlds crossover event from last year, Warner and the CW quickly fast-tracked a pilot order for a solo series. Rumor was the pilot was only lukewarmly received (it ain't great) but the execs had confidence the show could shake out so it was put to series. Then Ruby Rose broke her back trying to do her own stunt work during production limiting her time in the costume and leaving her on-screen time frequently leaning on something or sitting behind a desk. Then just when production was only two episodes from finishing - the pandemic shut things down closing out the season on an interesting cliffhanger. Or, it would have been interesting if the show as we know it continued. Shortly after, Ruby Rose then announced she was leaving the show and if that wasn't enough of a kicker her character isn't being recast but replaced entirely so now whatever Season Two is will effectively be a reboot within an unfinished storyline.

I really wanted to like this show. I did. But this season didn't start on the best of terms and it certainly didn't end much better. There are a lot of things working against this show. For starters, the first few episodes were about as subtle as a sledgehammer to your big toe with its social agenda. I dug the first run of the New 52 Batwoman comics when they came out. She's not a favorite character, mostly because I liked the Batgirl comics better - but I was certainly willing to see Batwoman come to life and I dug Ruby in Elseworlds. As her character is openly gay, it was an important step for Warner Bros to take with their television lineup, but the CW wasn't the network to put this show.

The writing of the early episodes is so blunt and on the nose, it's painful. The show also tries to ape the structure of every other CW superhero show with the hero having their "crew" of helpers right down to the socially awkward genius Luke Fox played by Camrus Johnson and the flighty airhead - but dependable half-sister Mary (Nicole Kang), the love interest, and the law enforcement father figure. This show was trying so hard to be groundbreaking but then it forgot to do anything actually groundbreaking with the format. It's cut and paste superhero theatrics courtesy of the CW.

While structure and setup are a problem, the worst sin of the series is the Kate Kane / Alice relationship. Sorry for spoilers but it's in the comics and the pilot episode basically ruins the important character reveal that Alice is Kate's twin sister Beth who was believed to have died in a car accident. Having been held captive most of her life, she's reverted to a psychotic child-like state within Alice in Wonderland. While the Kate vs Alice arc is critical to the character - it's so lazily rendered here it's repetitive. You could do shots every time Kate - not Batwoman - walks into Alice's lair to have a sisterly chat about how she believes Beth is still there deep down inside Alice even though Alice just murdered a house of people. But that's the first half of the series… don't even get me started on their version of Hush in the final episodes. With that, I'll give them credit the show did get better, believe it or not. Not amazing, but better with signs of improvement on the horizon and hope for what Season Two could bring.

The second half of the series - once the big Crisis On Infinite Earths crossover is done - the show actually feels like it was coming together. It suddenly feels creatively refreshed. Visually it begins to distinguish itself from the other saccharine CW shows. Fight sequences start to look more dynamic and have some urgency. Characters stop doing stupid things and it feels like story momentum is building with the various threads. Kate has given up on her sister ever being who she was. Alice and her disfigured pseudo-brother Mouse (Sam Littlefield) are in Arkham running the asylum from the shadows. The frequent blunt platitudes and lazy character development was easing away. It still had issues but this show was figuring itself out... and now it's over.

I honestly don't see how Season Two can work if they try to use any of the existing characters or story arcs. Nothing about the reasons for Rose's departure makes any sense and as a result, nothing in this season feels like it matters now. The showrunners intend to keep going with the characters at hand while creating a new character to become Batwoman - instead of one of the more obvious choices within the existing cast. Whatever conclusion comes of the Alice storyline is meaningless. I've said this before about some of the CW's DC Comics shows - they'd be better as miniseries or just keep to the crossovers. Her contribution to Crisis On Infinite Earths really was the only good thing to come from Batwoman: The Complete First Season.

Batwoman: The Complete First Season arrives on Blu-ray courtesy of Warner Brothers in a 5-disc Blu-ray + Digital set. The discs are housed in a sturdy 5-disc case with each disc getting its own tray and are not stacked. The case is housed in a slipcover with identical artwork. The discs load to static image main menus. Disc Five is the complete Crisis On Infinite Earths crossover event.

Like all other CW shows, Batwoman enjoys a robust 2.00:1 1080p transfer. While the show itself may not be the greatest, it looks pretty damn good on Blu-ray with appealing details, bold colors, and nice grim black levels and shadows. I'll give the show credit for making great use of various Chicago and Vancouver live locations - there are scenes in Chicago shot right near where I lived and also went to school that's pretty fun to see. Rose's Batwoman costume is solid work of mat black with textural details beyond the bold red symbol and hair to give the suit some dimension and presence.

Alice's outfit offers some intricate lace textures while Mouse's facial makeup is pretty gnarly. Later when Hush shows up the exposed flesh face is a nice welcome piece of gore and gristle. Colors offer bold primaries, but given this is a Batwoman show, there's only so many daylight sequences and instead, the show uses a lot of night locations and shadow work. Depth is appreciable throughout. The only anomalies of note are a few inconsistent effects shots - stitching two separate locations into downtown Chicago is one example and a handful of low-resolution drone shots stick out, but those are relatively minimal issues overall.

Each episode of Batwoman arrives with a nice action-packed DTS-HD MA 5.1 mix. The first couple episodes don't have much in the way of a dynamic presence, but as the show finds its legs and figures out how to make the action sequences a little more interesting, the surround effects offer a much more impressive range. LFE during some of the fights, explosions, or whenever Batwoman uses her grappling gun gives the mix a nice extra thud. Scoring is well placed even if it's not the most unique chunk of music or an interesting theme. Throughout dialog for every episode is clean and clear. Like the other CW shows, this has a fine surround mix that works well for the series.

Bonus features are a bit thin, but the meaty stuff in the DC TV Comic-Con panel is pretty good. Each disc has something of a bonus feature but they're mostly small deleted scenes that didn't need to be in the show one way or the other. Disc Four offers the most substantial materials while the Crisis On Infinite Earths disc has its own set of bonus features.

Batwoman: The Complete First Season wasn't great - it had issues. But it was getting better. Like any first season, there's a learning curve and by the time the final five or six episodes of the season arrived, it felt like this show was on a genuine upswing and actually had a purpose and drive into Season Two. Then it ends on a cliffhanger and Ruby Rose quits the show making the effort spent waiting for it to get better and actually starting to enjoy it feel pointless. At least Crisis On Infinite Earths was worth it, but that's a small consolation. Warner Bros. releases the series on Blu-ray with a solid A/V presentation and some worthwhile bonus features. It'll be a miracle of modern screenwriting if they can make Season Two pick up where this show leaves off and actually work. As it is - this is For Fans Only.