The Day the Earth Caught Fire

As the United States and the Soviet Union vie for nuclear supremacy, the whole world is caught in the crossfire as duel explosions rock the planet causing untold death and destruction from atmospheric upheaval. Starring Edward Judd, Leo McKern, & Janet Munro - sixty years later the film is all the more prescient as the world deals with a global catastrophe and the need for dedicated accurate journalism is all the more important. Kino Lorber Studio Classics delivers a terrific Blu-ray release featuring an excellent video transfer, a lively audio mix, and a pair of worthwhile audio commentaries to round out the bonus features. Highly Recommended.

The United States has detonated a massive nuclear bomb in the Antarctic. To show their strength the Soviet Union has detonated a larger bomb over the Arctic circle. In London, reporter Peter Stenning (Edward Judd) and the Daily Express newspaper crew are trying to understand a number of seemingly bizarre atmospheric conditions. As the evidence mounts, Peter, his coworker Maguire (Leo McKern), and the paper is forced to reveal that these two explosions not only happened at the same time, but they've shifted the tilt of the planet causing unprecedented catastrophic environmental damage risking the survival of all mankind. 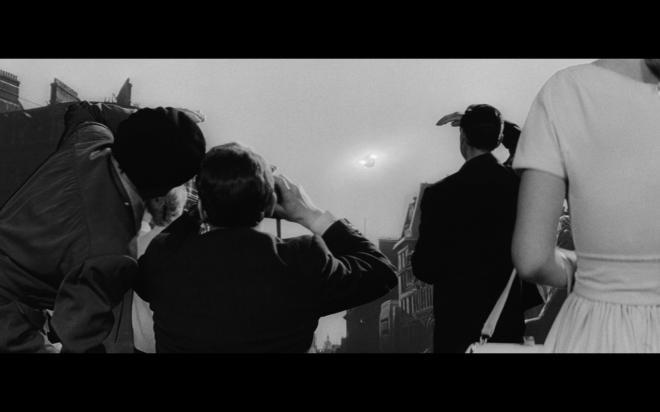 Man, I love going into a movie cold as a fish. I'd heard of The Day The Earth Caught Fire, I'd seen the box at rental places in the past and considered picking it up just because of the title. I had no idea what it was about and in all honestly dismissed it. So when this Blu-ray release was announced from KLSC, I figured "what the hell" and I'd give it a shot. Holy crap! This was one of the best surprises I've had in a long time discovering a back catalog title that's not only really good but is just as relevant today as it was 60 years ago.

What grounds this movie compared to other sci-fi disaster films is the focus of the film. Rather than rolling one massive piece of destruction at the audience where our lead character improbably survives one piece of flying death after another, instead, we watch a pool of newspaper reporters squeeze sources and try to figure out what the hell is going on. Think of this film like a less silly The Day After Tomorrow through the lens of All The President's Men. As Peter and Maguire struggle to piece together the facts, the urgency builds as one environmental catastrophe builds after the next. But things don't happen quickly, it takes days and months. At first, a little extra warm weather is cause for more time at the beach and a little extra ice in your whiskey down at the pub. Then it gets worse.

Watching how the public reacts in this film, slowly building concern until it's almost too late to do anything about it is very much like watching the news today. There are those who take climate change seriously just as there are people that took the health crisis seriously from the outset… and then there are those that needed one more beer at the bar or to go out to the beach. It's human nature to not become worried when you don't really see the side effects in your face - until it hits you personally and it becomes a different story. That was a part of the film that felt eerily current.

Even through the lens of a newspaper, The Day The Earth Caught Fire never loses pace or urgency. Writer and director Val Guest crafted a memorable cast of characters to hitch your attention to. Peter Stenning is a wreck when we meet him, divorced, hard-drinking, and shuffled from being a star reporter for the paper and is now Maguire's lackey writing filler. He needs to find his heart and the story of humanity's greatest challenge is it. In meeting the government office worker Jeannie (Janet Munro), Peter finds a piece of his heart but risks his relationship exposing the secrets she's learned. As we see destructive vistas of the River Thames dried up and cracked with people queued up for a public wash station, the film never loses the human element. The drama and your involvement come from following these people who demand to know what is going on and find it their duty to report it.

As I said, I love discovering a new favorite and this became an instant favorite. Burning through this film roughly three times inside of 48 hours, I still can't get enough of it. I've actually lost track of how many ears I've talked off - everyone giving me that semi-frightened wide-eyed "Uh-huh, sounds great!" look. My wife and I loved this one. With a new kiddo, it's now pretty rare for us to get to watch a movie in a single sitting and the little man gave us this blessing by taking a record-long nap. I can't imagine watching this one in chunks, there was too much tension and suspense - even if the screen wasn't littered with spectacle destruction on the Irwin Allen Scale.

The Day The Earth Caught Fire arrives on Blu-ray from Kino Lorber Studio Classics pressed on a Region A BD-50 disc. Housed in a standard case, the disc loads to a static image main menu with traditional navigation options.

Sourced from a new 4K restoration - I really wish The Day The Earth Caught Fire was released on 4K UHD with HDR. 95% of the movie is black and white with yellow-tinged scenes at the front and end to suggest how oppressively hot everything has become. Throughout, this is a gorgeous looking movie with a natural grain presence and strong details. Facial features, costuming, but also production design is really impressive. The news bullpen looks like a newspaper room with clutter stacked mountains deep and the London locations in picture-perfect form. More impressive were the models and painted backgrounds that show the steady decline of the city as it cooks and you can see all the impressive work that went into crafting them. The film's grayscale is also spot on allowing for bright brilliant whites without blooming and deep inky black levels with welcome shadow grading in between. Image depth is appreciable throughout. Source elements are in great shape, there's only ever some barely noticeable speckling, and those moments are usually seen only during optical effects shots or wipe transitions. Otherwise, this is about as picture-perfect it gets for a catalog release.

Along with a terrific video transfer, this disc enjoys an excellent DTS-HD MA 2.0 audio mix that really adds a lot of life to the film. Imaging and atmosphere were what impressed me most. When the film segues from the baked abandoned streets of London to the flashback inside the bustling newspaper office, the mix moves beautifully. All of a sudden there is a flurry of activity of typewriters clacking away, people barking at the copy boy, papers being ripped off the printers - complete with some crackling fast-talking dialog that is never lost in the mix. Sound effects are lively when and where they count but they're also pulled back for dramatic effect - when silence has more of an impact the film lets the mix go nearly silent. Free of any hiss or age-related issues, this mix is clean, clear, and effective throughout.

While the bonus features package may not be the most robust material, the two audio commentaries are excellent. The archival Val Guest commentary hosted by Ted Newsom is a fun one as the pair work off each other well with Newsom asking relevant scene-specific questions with Val Guest offering lots of info about the production, struggling since the early 50s to get the movie made and other relevant tidbits. Richard Harland Smith's commentary is also welcome, maybe not quite as engaging as Val Guest and Newsom's but it's a worthwhile listen.

I really enjoyed discovering The Day The Earth Caught Fire. Part of what I love about this gig is finding a movie I'd never seen before and it becomes a new favorite. That's the case here. It's a smart science fiction movie that doesn't treat the audience like an idiot nor is it dumbed down for entertainment value. While the specific scenario may be a stretch, the message behind it is relevant 60 years later. Also makes for a great double feature with The Day After. With a great cast, crisp writing, and smart direction I'm a new-found fan of this film. Kino Lorber Studio Classics delivers a first-rate Blu-ray experience for The Day The Earth Caught Fire that could only be improved with a full 4K Ultra HD release. The transfer is superb and the audio mix crackles. The bonus features may be light, but the audio commentaries are great listens. If you're a sci-fi fan or hell, just need a good movie to watch - check this one out. Highly Recommended.