The United Kingdom is invaded by alien-controlled robots, which re-animate dead human bodies. Survivors of the invasion are besieged by the walking corpses of slain friends and neighbors. A crack space pilot returns to Earth to find the planet has been devastated by some unknown forces; so he organizes the survivors in a plan to ward off control by a the killer androids...

You've got to hand it to the communists, they inspired a hell of a lot of great science fiction movies through the 1950s and 1960s! That big red menace proved to be the launching pad for countless films looking to tap into the looming fear of the day that they were coming for us, they were going to get us, and they were going to make us just like them! 1964's 'The Earth Dies Screaming' is the perfect B-Movie example of this cultural fear brought to the B-Movie screen. Produced by the legendary Robert L. Lippert and directed by Terence Fisher, this film takes the alien invader/ communist takeover analogy right up the edge and gloriously drives right over the cliff with it.

Everything was normal for sleepy Northern England. Life was as it should be with people going here and there about their daily lives. Everything changed when everyone fell asleep. Some were just walking to the marker, others were driving to their cars, one man was even flying an airplane. Without warning or explanation, all of these people stopped what they were doing, fell asleep, and died where they lay. Test pilot Jeff Nolan (Willard Parker) survived the incident from his airplane. As he travels to a tiny hamlet to find help, he sees only dead bodies - until the obnoxious Quinn Taggart (Dennis Price) and Peggy (Virginia Field) show up. Soon, Nolan is no longer alone with a small band of people who somehow managed to survive the incident. When they learn the entire world has been attacked, they hold up in a hotel and try to figure out what to do next. If they hope to survive, Nolan and his fellow survivors will have to find a way to destroy the alien mechanical invaders and the army of the undead they've awoken.

In all honesty, there's nothing quite like a Robert L. Lippert film. Like Roger Corman and Burt I. Gordon, Lippert was a master producer of B-Movie schlock. If he didn't have a small creature to turn into a giant irradiated monster, he'd resort to ripping off bigger budgeted popular movies of the hour. 'The Earth Dies Screaming' is no exception to Lippert's creative ability to rework a plot as the film is at its essence 'Village of the Damned' meets 'Invasion of the Body Snatchers.' Written by Harry Spalding under the name Henry Cross, the film manages to find an eerie and suspenseful tone while not really doing anything all that new or innovative with the material. 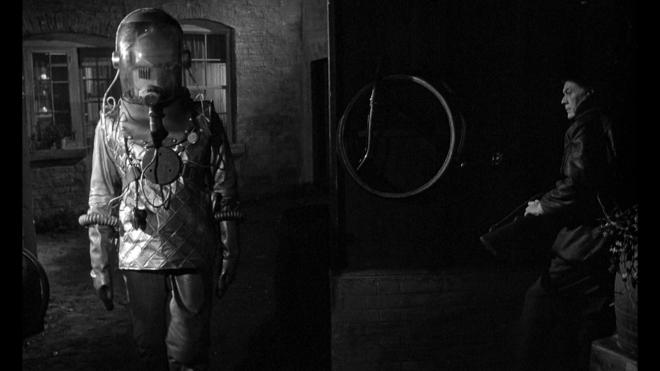 The film was clearly working with a very limited budget as the film was shot on location without having to build many (if any) sets. As there are very few obvious effects shots, the film would appear to have saved its budget for the mechanical overlord costumes and the creepy eye makeup for their zombie victims. Actor David Spenser even appears to be wearing a costume designed for a much shorter and thinner man as his clothes look like an uncomfortable ill fit. Taking all of that budgetary hoopla aside, for a B-Movie, 'The Earth Dies Screaming' is surprisingly effective and suspenseful - especially when you keep in mind the era this was filmed. At any time the Red Menace was ready to drop the bomb or gas us into oblivion and those trappings come through with great results. It's a creepy little flick and it doesn't take a lot of effort to suspend disbelief and side with our human companions.

With its thin budget and no-frills plot line, the film's success rests on the commitment of the cast. They easily could have sloughed this movie off, but instead, they're complete professionals and play the silliness as straight as an arrow. When you have the slightest inkling of  tension or suspense from the film, it's because you believe these people are in some measure of peril - even if the monsters chasing them are rather a bit goofy. As much as I was laughing along with the film, I was equally onboard with its terrifying plotline. The idea of being the last survivors on earth is certainly a terrifying prospect. While 'The Earth Dies Screaming' may not be a complete success at realizing its vision, the film is a wild and entertaining time and one I would joyfully recommend to genre fans. And with a run time of just over an hour, the film never overstays its welcome.

'The Earth Dies Screaming' arrives on Blu-ray courtesy of Kino Lorber and their Studio Classics label. Pressed onto a Region A BD25 disc, the disc comes housed in a standard Blu-ray case. The disc opens directly to a static image main menu with traditional navigation options.

Considering this was a low budget affair, 'The Earth Dies Screaming' arrives with a strikingly well-maintained 1.66:1 1080p transfer. The image maintains a thin layer of film grain throughout allowing for some pleasing and life-like details to come into view. All you really have to do is look at the production design work, the monster costumes, and the creepy eyes of the zombies to see for yourself. Grey scale is in fine order with deep blacks and solid shadow separation giving the image plenty of three-dimensional depth. The print sourced for this transfer is in very good shape with only some slight speckling and ultra thin scratches to report. All around this is an impressive transfer for a film of this vintage.

Just as impressive as the video transfer is the English DTS-HD MA 2.0 audio mix. This is obviously a mono track upgraded to stereo but is still very natural and effective sounding. Dialogue comes through clean and clear and there is the right amount of quiet ambient noise and background effects to give the sense of eerie spaciousness. The score kicks in loud and clear during all of the right moments and the robotic monster sound effects have a great canned "buzz" to them that is a joy to hear. The track is free of any age-related anomalies like hiss, scratches or pops making it a very pleasing listening experience.

Audio Commentary: Historian Richard Harland Smith provides an engrossing and often times entertaining commentary track explaining the various aspects of the production, the direction, its reception and so forth.

Animated Image Montage: (HD 3:37) This is your standard press photos and behind the scenes pictures collection, still some cool stuff to be seen.

Sale Price 18.21
List Price 29.95
Buy Now
3rd Party 16.29
In Stock.
See what people are saying about this story or others
See Comments in Forum
Previous Next
Pre-Orders
Tomorrow's latest releases