You Don’t Nomi is a compelling visual essay examining the misunderstood legacy of the 1995 Paul Verhoeven film Showgirls. With narration from various critics, writers, and artists the film tackles the subject from various viewpoints allowing an interesting cross-section of opinions on the shocking flop. More than a documentary from first-time director Jeffrey McHale the film examines the career of Paul Verhoeven, the fandom Showgirls created, and the fallout from the film’s failure. RLJE brings You Don’t Nomi to Blu-ray with a solid A/V presentation but sadly no bonus features to brag about. It’s an utterly fascinating film so I’ll call it Recommended. 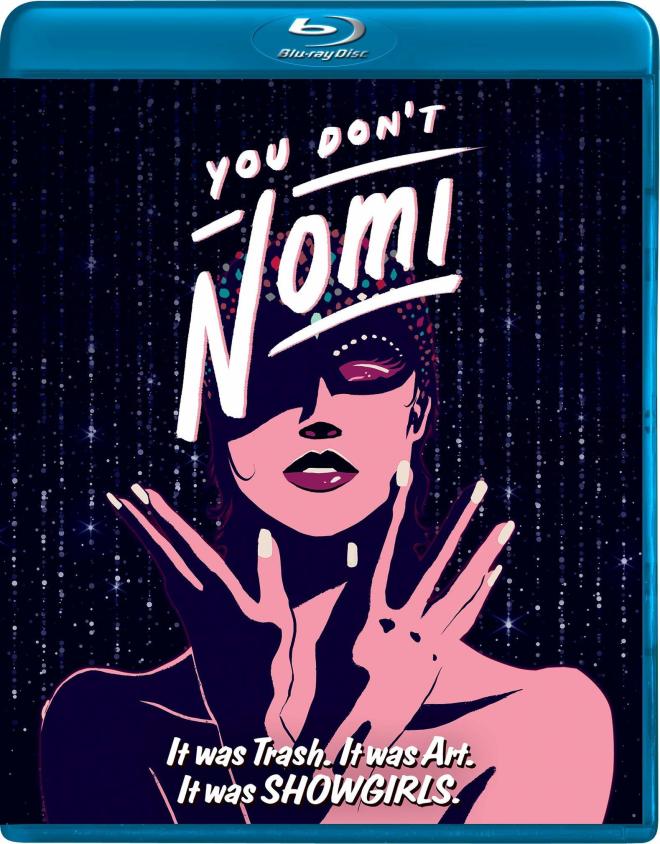 You Don’t Nomi isn’t a making-of documentary per se but rather an appreciation for the misunderstood legacy of Paul Verhoeven’s 1995 flop Showgirls. From devoted followers who look upon the movie as a masterpiece that influenced their lives to film critics who think its unredeemable trash, director Jeffrey McHale’s approach is to give them equal weight no matter what. Whatever your opinion is of Showgirls you’re likely to find support for it here. We never see the contributors during the film but instead are treated to a well-paced visual essay using clips from Verhoeven’s films and archival footage. In doing so we can see recurring visual motifs and themes running through Verhoeven’s filmography well before his biggest American success RoboCop. Seeing the talking heads might detract from the impressive editing McHale has done to drive the film’s focus.

For the uninitiated, Showgirls is about a woman named Nomi who leaves her small town with a new name and dreams to reinvent herself in Las Vegas. She uses sex as a tool for attention and builds a family through the people around her. After befriending Molly (Gina Ravera) she is introduced to her boss, the headlining showgirl Cristal Connors (Gina Gershon) and her producer Zach (Kyle MacLachlan). As an ambitious stripper who wants to take over the world Nomi climbs her way to the top no matter who she has to push down the stairs along the way. The restrictive NC-17 rating was thought to open the door for more films with adult content hitting mainstream markets, but sadly it crippled the film's chances at financial or critical success. Coupled with outrageous performances and campy dialogue Showgirls failed to convey its message to audiences and it failed miserably at the box office.

McHale divides the film into three parts: Claim 1: Piece of Shit, Claim 2: Masterpiece, and finally Claim 3: Masterpiece of Shit. For those who have given Showgirls any amount of consideration, these positions ring true simultaneously. The film starts strong with a deep dive after Basic Instinct when Paul Verhoeven was considered a provocateur and satirist of American culture and sexuality. Screenwriter Joe Eszterhas was on a hot streak as well helping solidify the mid 90’s erotic thriller explosion. McHale cooly identifies the director’s broad themes of sexuality and violence through his films ultimately resulting in feminist and LGBTQ communities hailing Showgirls as a cultural beacon.

Here we get into performer Peaches Christ and the launch of her midnight movie drag shows. “No. This isn’t for you, this is for us” she says in response to the typical gut reaction when mentioning Showgirls. It’s this evolution that McHale and company identify noting that a Piece of Shit could never accomplish such a feat. In defense of the film’s status as a critical Masterpiece, however, the ground is a bit shaky but thankfully there are a number of critics on hand to bring Nayman back down to Earth. My favorite is this quote from critic David Schmader when he chimes in that Showgirls was “written by a 13-year-old who imagines what an adult does at night”. There are also lengthy sequences about the use of mirrors in the film and an insane dissection of the Doggy Chow scene that are amusing but barely hold water.

Over a slow-motion dance sequence from Saved By the Bell Nayman drops an emotional bomb with “it depends on your age how much the biography of Elizabeth Berkeley impacts your experience of the film.” Here is when the mostly jovial back-and-forth settles into a deeply serious tone about the career fallout of Elizabeth Berkeley. Nayman dissects the arc of Berkeley from TV through the aftermath of Showgirls highlighting a moment when the actress attempted to save face and eventually reshape the film’s legacy. “It was intended as a fun, over-the-top movie,” she says in an interview marking the first time anyone from the production flipped the script on the film’s tone. While I loved seeing the footage and testimonials from midnight showings and the stage musicals, it's when Elizabeth Berkeley attempts to retell the story of the film that ruined her career that You Don’t Nomi became a tale of resurrection. I honestly lost it a bit when footage from an anniversary screening of the film featured Berkeley on stage thanking the fans for supporting the film.

Where things fall short for this visual essay is in the initial approach. It starts out as a critical analysis but peters out before it’s ultimately saved by the examples of the cultural impact of the maligned film. I think the strongest element of You Don’t Nomi is that its creators and contributors can all understand why it's entertaining and watchable as hell but also meets the movie at its own level. Our own writer Joshua Zyber said in his 2010 Blu-ray review that “I'll surely watch Showgirls a dozen times more before I watch Avatar again.” Hell yeah, bro.

Identifying the complicated love for such a messy yet entertaining movie is what makes this documentary so fascinating! However, no amount of analysis is going to build such a solid case that the film is completely redeemed. I mean there is only so much you can read into the “Doggy Chow” scene, right? So, is Showgirls a Masterpiece or a Masterpiece of Shit? In the words of Forrest Gump, “I think maybe it's both. Maybe both is happening at the same time.”

You Don’t Nomi arrives on Region A Blu-ray thanks to RLJE Films. The disc loads the RLJE logo before landing on the Main Menu screen with scenes from the film playing behind basic navigation options. 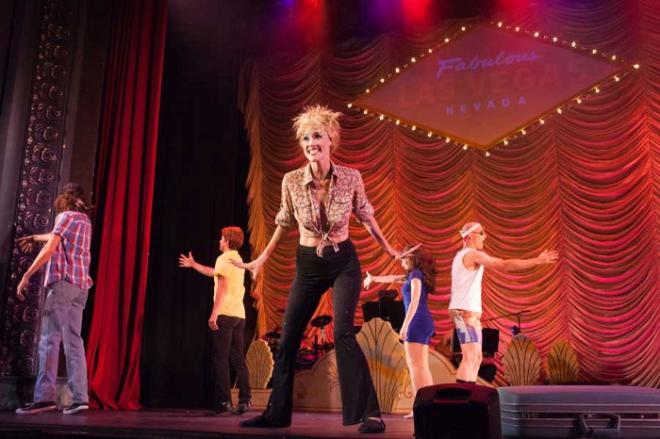 Presented in 1.78:1 the 1080p image transfer for You Don’t Nomi looks really solid when the film utilizes footage from reliable sources. Clips from Showgirls appear bright with pronounced vivid colors though a bit oversaturated at times. Other Verhoeven films appear with similar quality for his newer films like Black Book but lesser for his early works such as Spetters.

Clips from TV sources in a 1.33 aspect ratio appear as expected with plenty of static and noise. Footage from the various Showgirls-themed musical productions are presented in a digital handheld style that offers high-quality images with plenty of bright primaries and strong black levels but shaky presentations.

You Don’t Nomi arrives with a fairly standard DTS-HD MA 5.1 audio track. This is a dialogue-heavy film from narration and interview audio snippets so quality and clarity are key here. The audio mix is well balanced without hiss or pop detected though some old archival footage is a bit noisy.  Scenes from particular movies lit up the surround channels and LFE frequencies especially when McHale included moments from RoboCop. 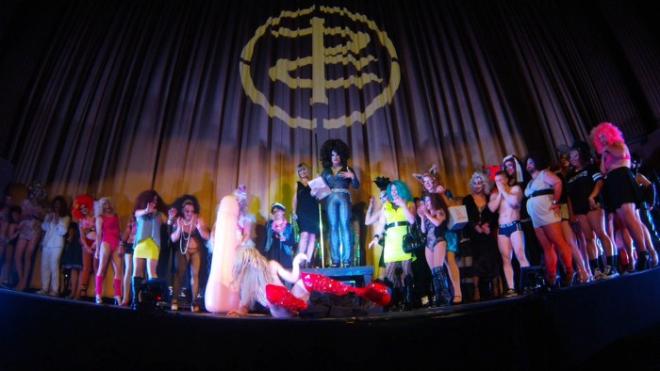 Unfortunately, there are no special features on this Blu-ray.

However, do yourself a favor and pick up a copy of Showgirls on Blu-ray featuring “The Greatest Movie Ever Made” Commentary by David Schmader. Trust me.

You Don’t Nomi is a compelling visual essay about a truly divisive cult film. Tackling the maligned Showgirls from multiple viewpoints allows everyone from staunch critic to superfan some enjoyment from the film’s surprising legacy. McHale and company create a fascinating document of the Verhoeven flop while also giving special attention to those who were inspired by it.

The Blu-ray from RLJE arrives with a solid A/V presentation but sadly no bonus features to brag about. For fans of Showgirls or those who dig film documentaries, You Don’t Nomi comes Recommended.