Light and airy with a continental flair, The Reluctant Debutante is a charming diversion, thanks to effervescent performances from Rex Harrison and Kay Kendall, who are far more interesting than the title character. This spritely but predictable confection about a stepmother's tireless efforts to properly present her nonplussed American stepdaughter (Sandra Dee) to British society and steer her toward a suitable mate is peppered with madcap moments, but lacks the spice of more racy rom-coms. A brand new HD master spotlights the artistry of director Vincente Minnelli and enhances the appeal of this enjoyable, featherweight romp that's definitely recommended for classic movie fans.

Say the name Vincente Minnelli and such scrumptious and sumptuous musicals as Meet Me in St. Louis, An American in Paris, The Band Wagon, and Gigi immediately spring to mind. Look deeper, though, and you'll discover Minnelli stands as one of Hollywood's most versatile directors. In addition to whipping up several of cinema's most revered musicals during an enviable 30-year career, he helmed an array of esteemed comedies, melodramas, romances, even a biopic, and infuses them all with his signature artistry and impeccable sense of style.

The Reluctant Debutante can't compete with Minnelli's best comedy - that honor goes to the uproarious Father of the Bride - but it tries its best as it chronicles the madcap complications that arise when an overzealous British stepmother micromanages her teenaged American stepdaughter's coming out ball amid the stuffy, judgmental minefield of upper-class British society. Elements of drawing room comedy and social satire pervade William Douglas Home's adaption of his mildly successful stage play, but it's the isolated moments of slapstick that really enliven the proceedings. Watching the upstanding, veddy-veddy civilized British elite navigate drunken stupors and perform exquisitely timed pratfalls engender the biggest laughs in this charming, featherweight trifle.

When perky, pretty co-ed Jane Broadbent (Sandra Dee) crosses the pond to visit her dad Jimmy (Rex Harrison) and meet her oh-so-elegant stepmom Sheila (Kay Kendall), they all expect a quiet, getting-to-know-you visit. That all changes when Sheila's busybody bosom buddy Mabel Claremont (Angela Lansbury) begins blabbering about her daughter's upcoming debut ball. That gets Sheila's competitive juices flowing, and much to her blasé stepdaughter's chagrin and oblivious husband's surprise, she impulsively plans a lavish coming out party for Jane that she hopes will eclipse Mabel's equally opulent soirée.

The trouble is Jane doesn't have a date. Sheila tries to play matchmaker, but the nerdy English society boys don't float Jane's boat. She only has eyes for David Parkson (John Saxon), an Italian-American drummer in one of the orchestras that perform at the endless string of balls she's forced to attend. David, though, has a questionable reputation that Mabel is only too happy to inflate. That makes Jimmy and Sheila very worried, but their attempts to delicately steer Jane away from David only push her more forcefully into his arms. Will Jane be socially ruined before she even arrives? Or will this unpretentious all-American girl magically transform into Cinderella and have a fairy tale romance? 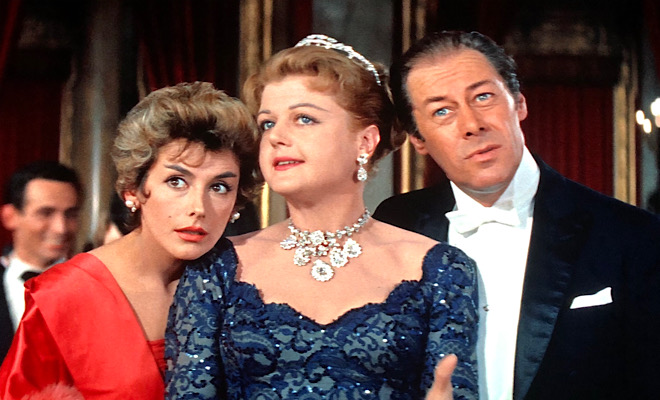 Those aren't particularly burning or provocative questions, but they're intriguing enough to keep The Reluctant Debutante afloat for a breezy 96 minutes. Minnelli's trademark elegance suits the material, and his ability to simultaneously celebrate and spoof the snobby attitudes, stuffy pageantry, and rigid morals of the British ruling class keeps the film's engine humming despite a rather tepid plot that doesn't even try to push the envelope. More culture clash and less matchmaking would give the story some much needed bite, but the script does a nice job of getting us out of the drawing room and into several lavish ballrooms that nicely fill the CinemaScope canvas. Much of the movie recalls previous Minnelli classics like Meet Me in St. Louis and Father of the Bride, and the score is practically a greatest hits playlist from MGM's glorious musicals of yore. "The Boy Next Door," "Easy to Love," "You Are My Lucky Star," "How About You?," and "Love" are just a few of the standards sprinkled throughout the soundtrack. (Due to a musician's strike, even the main title theme had to be recycled from Minnelli's Designing Woman, released the previous year.)

Harrison is at his energetic and expressive best, delightfully displaying befuddlement, exasperation, bombast, and stunned disbelief...often in various stages of inebriation. He and Kendall (more on her below) had married the previous year, and their relaxed chemistry and infectious sense of fun make them a believable couple on screen. Their boisterous and convivial personalities fuel the film, which is really more about them than the bubbly yet bland teenage title character. 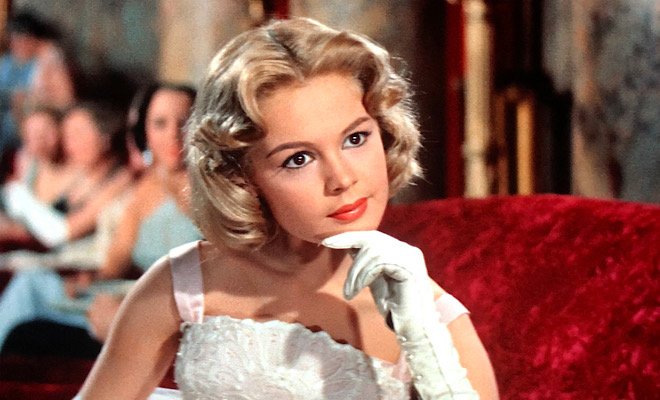 Lansbury goes to town as the gossipy, sly-as-a-fox family friend, and Dee - in only her second film - projects a maturity far beyond her 14 years. Yes, you read that right. Dee was just 14(!!!) when she made The Reluctant Debutante, which makes her love scenes with the 23-year-old Saxon more than a little creepy. (According to the biography Dream Lovers, written by Dee's son, Dee's mother inflated Sandra's age by two years to get her more work.) Adolescent age aside, Dee lights up the screen, exuding a refreshing naturalness and authentic sincerity that add dimension to her cardboard character.

It's Kendall, though, who steals the film and makes it worth watching. If you're not familiar with this captivating, tremendously talented British actress who made only a handful of American films in her all-too-brief career, no one can blame you, but once you see The Reluctant Debutante (as well as Les Girls, the musical she made the previous year with Gene Kelly and Mitzi Gaynor), you will fall instantly and hopelessly in love with her. Her terrific sense of timing, physical grace and agility, self-effacing attitude, and eagerness to go out on a limb continually perk up the film, which quickly loses steam whenever she's off screen.

Similarities to Carole Lombard abound. Both women were gifted comediennes and ideal leading ladies, and both died tragically at the height of their fame. The Reluctant Debutante would be the penultimate film of Kendall, who would succumb to leukemia just eight months after its release at the tender age of 32. One can only imagine how far she might have gone had cancer not taken her life. Bright, beautiful, and so funny, Kendall is an absolute joy, and The Reluctant Debutante, which showcases her inimitable talents, wouldn't be nearly as much fun without her.

Despite an excellent cast, gorgeous production values, slick direction, a fair amount of laughs, and a hefty dose of joie de vivre, The Reluctant Debutante never quite scales the heights we expect. The buoyant performances of Harrison and especially Kendall (with an able assist from Lansbury) keep it afloat, and Minnelli wraps it all up in a stylish bow. It may not be all we hope for, but it's the epitome of light, frothy entertainment. And every now and then, that's just the tonic we all need. 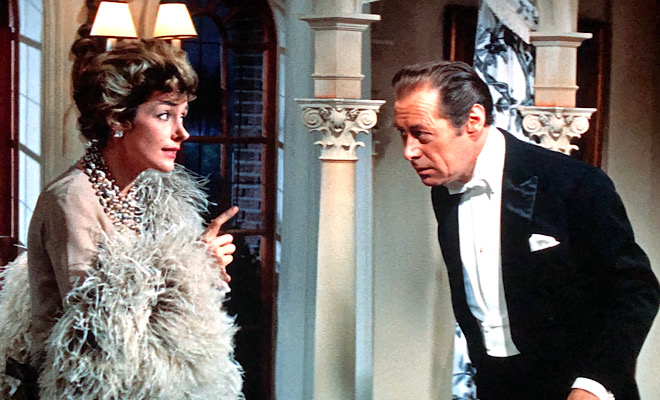 The Reluctant Debutante arrives on Blu-ray packaged in a standard case. Video codec is 1080p/AVC MPEG-4 and audio is DTS-HD Master Audio 2.0 mono. Once the disc is inserted into the player, the static menu without music immediately pops up; no previews or promos precede it.

A brand new HD master sweetens this confection, but it doesn't quite exude the spit-and-polish I expected. Grain inconsistencies plague the 1080p/AVC MPEG-4 transfer, lending this lush, elegant romp a choppy feel. While the image projects a lovely film-like look throughout, isolated scenes exhibit a heavier layer of texture that dulls and diffuses the otherwise excellent contrast and clarity. Colors, however, are gloriously vivid throughout. Reds especially pop, whether it's Kay Kendall's gown in the first ball scene, the red drapes in Rex Harrison's office, or a strategically placed lamp with a blazing red shade that grabs attention in all the scenes that take place in their home. The blacks of the gentlemen's dinner jackets are appropriately inky, whites are brights, and costume textures - most notably the gray feather wrap Kendall wears in the latter part of the film - display plenty of fine detail. Jewels and sequins sparkle appropriately, flesh tones are spot on, and close-ups are sharp yet glamorous. Best of all, the spotless source material is free of any age-related nicks, marks, or scratches. While I don't have a DVD to compare it to, this transfer, despite its grain issues, shows off The Reluctant Debutante in the best possible light, and surely trumps any other home video rendering of this breezy romantic comedy.

The DTS-HD Master Audio 2.0 mono track supplies clear, well-modulated sound. A wide dynamic scale allows the orchestrations plenty of room to breathe and embraces all of their highs and lows without any distortion. All the dialogue, except for a few befuddled outbursts by Harrison, is clear and easy to comprehend, and no age-related hiss, pops, or crackle intrude. Drawing room comedies don't usually feature very active audio, and The Reluctant Debutante is no exception. This track is largely unobtrusive, but asserts itself when necessary.

The film's original theatrical trailer, which is in very good condition, is the only extra on the disc.

Forget the insipid love story. The real attraction of The Reluctant Debutante is the bubbly, utterly delightful Kay Kendall, who hijacks this wispy rom-com with a broad, beguiling performance. As a harried stepmom determined to make her new stepdaughter the toast of British high society - whether she likes it or not - Kendall steals the show and our hearts. She and Rex Harrison (her husband on screen and off) enliven a ho-hum tale, while director Vincente Minnelli gussies it up with sumptuous visuals that almost make us forget how thin the plot really is. Though the source material is a bit inconsistent, a brand new HD master shows off the film in the best possible light, emphasizing the elegance of this featherweight Cinderella yarn. The Reluctant Debutante may be ultimately forgettable, but it's plenty of fun while it lasts and definitely recommended for classic movie fans.