The Kiss of the Vampire

Hammer horror fans cross your fingers and get the holy water - The Kiss of the Vampire arrives on Blu-ray from Scream Factory in a fitting Collector's Edition set. Sticking to their tried and true vampire movie format - traveling newlyweds Edward de Souza and Jennifer Daniel encounter the diabolical Noel Willman and his "family" of vampires in a remote part of Europe. It's a formula that works - while not very original - it's a lot of fun. Sporting a pleasing newly restored transfer, a solid audio mix, as well as a metric ton of great new bonus features - horror fans have one to add to the collection. Highly Recommended.

Newlyweds Gerald (Edward de Souza) and Marianne (Jennifer Daniel) Harcourt -- not to be confused with Jonathan and Mina Harker -- are traveling through Europe for their honeymoon when their motorcar runs out of petrol stranding them in a remote village with a dark history. The seemingly benevolent Dr. Ravna (Noel Willman) extends his every courtesy to host the two lovebirds. After Marianne disappears after a party, Gerald soon learns of Dr. Ravna's dark vampiric plans for his bride. Geralds's only hope is the mysterious Professor Zimmer - who has had his share of personal dealings with vampires. 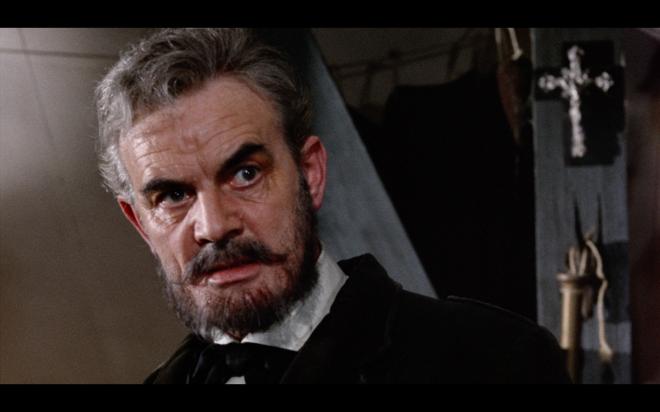 If you're a fan of Hammer horror films - you'll no doubt have encountered a few Dracula-free vampire movies. They're a little odd in that they feel like they're going the long way around to making a Dracula movie without Christopher Lee or Peter Cushing without actually calling it "Dracula." This is the case for The Kiss of the Vampire. Dr. Ravna… he's Dracula. Professor Zimmer… he's Van Helsing. Gerald and Marianne are simply Jonathan Harker and Mina Murray surrogates. They're seduced into a nest of vampires and the angry vampire hunter has to save the day. Pretty routine - but in this case done well. The ending is a particularly creative conclusion - a little hammy in execution maybe, but very inventive for a vampire flick.

At roughly 88-minutes The Kiss of the Vampire is a briskly paced film. With the sharp screenplay by John Elder and the direction of Don Sharp, the movie sets the tone with a ghastly entertaining funeral sequence and breezes through one plot twist after the next. I appreciated the slight detour into Gaslight territory when the locals and police try to convince Gerald that his Marianna never existed to throw him off of Dr. Ravna's insidious plot. The show might have worked better if this lasted a bit longer, but that twist comes almost too late to center the movie around. That would have needed to happen in act one to work. As this movie was coming to a close, there were vampires to kill and Professor Zimmer needed to get to work!

Of the Christopher Lee-free Hammer vampire movies, I think I have to peg The Kiss of the Vampire among the better attempts. There are so many it's hard to quantify them all but I enjoy where this one goes. If you're a student of horror movies it's easy to spot the plot twists, but even knowing where things are headed doesn't hold the film back from being entertaining. It could well have benefitted from Christopher Lee's baritone voice and imposing stature, but that can be said for any number of movies. If you're game for a fun evening in with a good creepy movie, you'll get your money's worth with The Kiss of the Vampire.

Scream Factory unleashes The Kiss of the Vampire to Blu-ray in a single-disc Collector's Edition set. Pressed on a Region A BD-50 disc, the disc is housed in a standard sturdy case with an identical slipcover and reversible insert art. I much prefer the reversed insert art depicting the original poster art - it's one of my favorite Hammer movie posters so it's really cool to see it replicated for the insert art. The disc loads to a static image main menu with traditional navigation options.

The Kiss of the Vampire arrives with a devilishly solid 1.66:1 or if you prefer 1.85:1 1080p transfer. The 1.85:1 aspect ratio is the default version where the 1.66:1 can be accessed in the Extras menu. Aside from some slight framing differences around the edges, there isn't a drastically different appearance between the two. Since it'd appear that the transfers were struck from the same restoration elements, it's dealer's choice.

The transfer was sourced from a new 4K scan of the interpositive and it's pretty damn glorious. I haven't seen this movie in a number of years so it's great to see it looking so good. Film grain is fine throughout with impressive details allowing for a welcome film-like appearance. Colors maintain that bright bold primary presence one expects from a Hammer film. Reds, blues, and yellows pop beautifully but green is another standout color. Flesh tones are healthy. Black levels are nice and inky but there are a few moments throughout where blacks slip a little gray or brown. Otherwise, image depth is appreciable. Aside from some very slight speckling, this is a near-flawless looking image.

Kiss of the Vampire is also rewarded with a natural and effective DTS-HD MA 2.0 mono mix. Imaging and atmospherics are a bit restrained but there's some nice dimension to the track - especially towards the big finale. Throughout dialog is clean and clear without any issues. Sound effects are lively and natural. Scoring by Hammer stalwart James Bernard offers up the right kind of mood slipping in and out of the film without overpowering the mix. His music is a frequent presence in Hammer movies and there are what sounds like a few reused music cues but it's still a great score. All in all a solid audio mix that works well for the film.

Well, Scream Factory certainly didn't skimp on the bonus features here! On top of the two different aspect ratio options, you get specific audio commentary tracks to match. The cast commentary with Edward de Souza, Jennifer Daniel and Peter Irving is great as they share a lot of anecdotes about the movie. Then if that wasn't enough, Scream also included the U.S. television edit of the movie retitled Kiss of Evil that removes most of the gore and any sexually suggestive material in favor of an extraneous subplot about the villagers of the town living in fear of Dr. Ravna. Sadly this version is only presented in SD, and then not in great shape as the image is sourced from old broadcast tape masters and has significant hiss in the audio - but still fun to watch just the same. On top of that The Men Who Made Hammer segments hosted by Richard Klemensen offers some welcome history and background about two of Hammer's major players. Between the commentaries, and the alternate versions of the movie - you've got a lot of material to pick through! 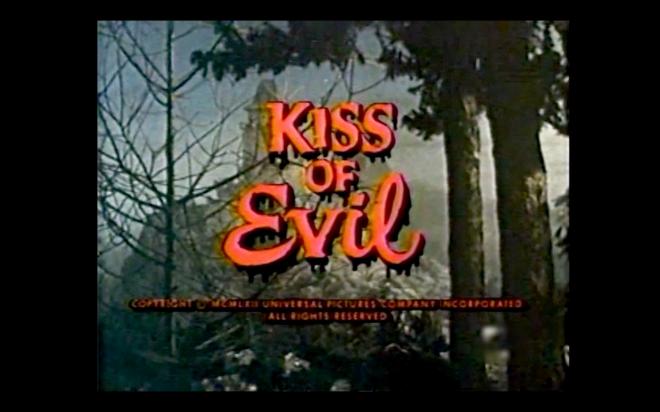 The Kiss of the Vampire may not be the greatest of the Hammer horror entries - let alone one of their vampire films with the absence of Christopher Lee's Dracula felt throughout. That said, this movie is a hell of a lot of fun. It's basically Dracula with a little window dressing - but it's got some clever twists to keep it unique and fun. Again - it's a hell of an ending. Scream Factory has done a masterful job delivering this film to Blu-ray with not only a terrific A/V presentation but an absolutely stacked assortment of bonus features. The Kiss of Evil television version alone is a huge get but then you have multiple audio commentaries stacked with some informative mini-docs. If you love Hammer horror, this movie is a lot of fun and this disc is loaded making for a Highly Recommended release.