Eight years can be an eternity between franchise installments, but Hammer managed to resurrect Christopher Lee's Count in great form for 1966's Dracula: Prince of Darkness. The film takes its time slowly building the dread limiting the title character to a precious few minutes of screen time and zero dialogue, but the results are fantastically creepy. Plus, the film features one of the gnarliest, most grotesque resurrection sequences! Scream Factory brings Dracula: Prince of Darkness to Blu-ray in a true Collector's Edition with both UK and US versions of the film and a ton of new and archival bonus features. The UK Release offers the same transfer as the previous Millennium Media release while the new 4K scan of the US release offers a distinctly different viewing experience that offers up many benefits and flaws of its own. Overall, fans who missed the 2013 release should be very happy with this edition and those looking for an upgrade should be happy to have both versions with the new bonus features. Recommended.

"Here's to him, may he rest in peace, Count Dracula."

Traveling throughout Europe is supposed to broaden the mind - so long as you don't go visiting old cursed castles and resurrecting long dead vampires! Unfortunately for Helen (Barbara Shelley), her husband Alan (Charles Tingwell), Diana (Suzan Farmer) and her husband Charles (Francis Matthews) - that's exactly what they managed to do. After not listening to the enigmatic Father Sandor (Andrew Keir), the couples decided to go ahead and visit the remote Bavarian town of Karlsbad. When their carriage driver refuses to go any further, they're forced to seek shelter in the castle that belonged to the deceased nobleman Count Dracula (Christopher Lee) with only the servant Klove (Philip Latham) to tend to their every need. Only Klove has a dark scheme to resurrect his dead master and these four travelers are the key. 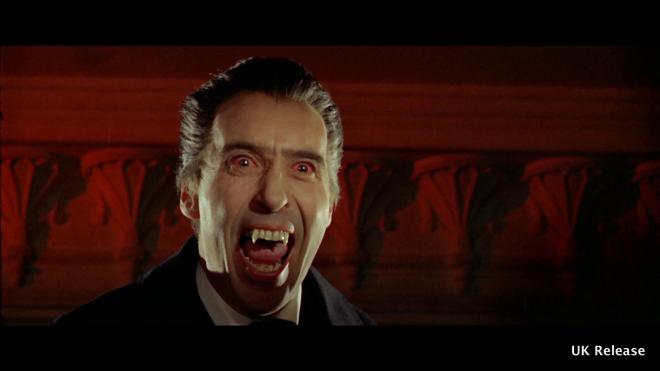 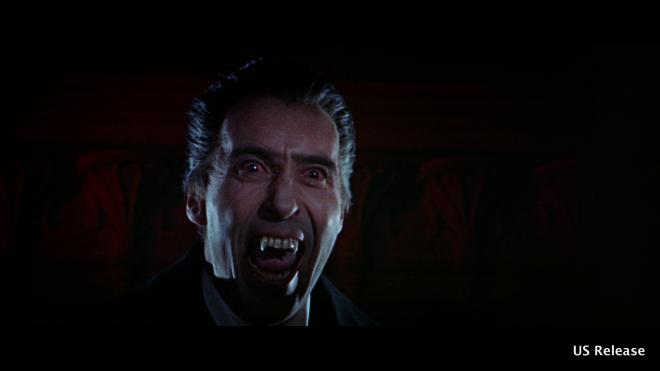 I dearly appreciate a movie that knows how to take its time and not rush into things. At a brisk 90 minutes, Dracula: Prince of Darkness doesn't even begin to reintroduce the title character until halfway into the show. For most horror films this would be an eternity, but director Terence Fisher and screenwriters Jimmy Sangster and Anthony Hinds manage to keep things moving in a very purposeful and interesting direction. Key to the task is the introduction of the new vampire warrior Father Sandor played with gusto by Andrew Keir. Sandor acts as a conscience for the superstitious locals berating them that their fears of the dead Dracula are unwarranted. But then he meets the traveling Londoners and learns of their intended destination - and suddenly the man is actually afraid. It's these small moments that help keep you interested and creeped out until Cristopher Lee rises from the ashes.

Speaking of rising from the ashes - talk about a resurrection sequence! I grew up watching these Hammer Dracula films on TV and tape rentals. Most of them blurred together until I was an adult and actually spent the time to rewatch them, but this resurrection sequence haunted me as a kid. It's so ghastly and so grotesque that it always stuck with me as not only an incredibly creative way to cinematically bring back the dead Count but also so startling and effective it was one of the few moments of all the horror movies I saw growing up that actually genuinely scared me. Today it still gives me chills just remembering it let alone watching it again! 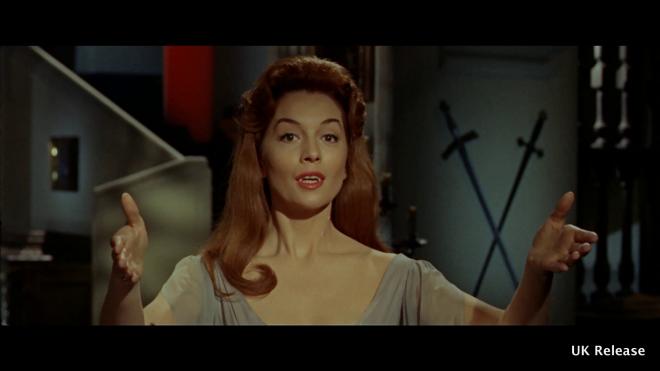 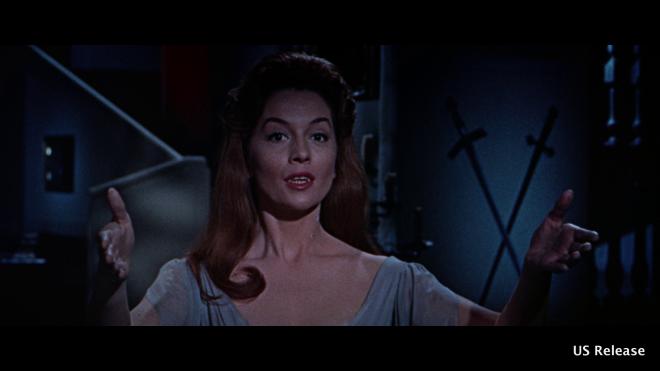 Taken as a whole I wouldn't say that Prince of Darkness is nearly as effective as Horror of Dracula, but I will say that it is a very worthy followup featuring all of the signature gothic tropes one expects of a Hammer production. My only real gripe is that the flow of the film is a bit off at times. I appreciated the slow buildup of suspense and terror on the front end letting the film take its time. When Christopher Lee's Dracula finally makes his grand entrance it's great and the film motors along at a great clip - but it keeps making frequent stops to introduce new characters and locations that could have been established earlier. These little hiccups aside, the film is still a fun and rewarding ride. Even if Lee doesn't say a single damn word in the whole show - he is still an imposing threat and a great Count Dracula. It might have been fun to find a way to bring Peter Cushing back beyond the recap footage at the beginning, but even without him, Dracula: Prince of Darkness is a worthwhile and very entertaining sequel.

Dracula: Prince of Darkness is resurrected onto Blu-ray in a new Collector's Edition release courtesy of Scream Factory in a single disc set. Pressed onto a Region A BD-50 disc, the disc is housed in a sturdy standard Blu-ray case with identical slipcover artwork as well as reversible case artwork with the film's original poster image. The disc loads to a movie select menu allowing you to choose either the US Release or the UK Release. Both options lead to a static image main menu with access to the same set of bonus features. 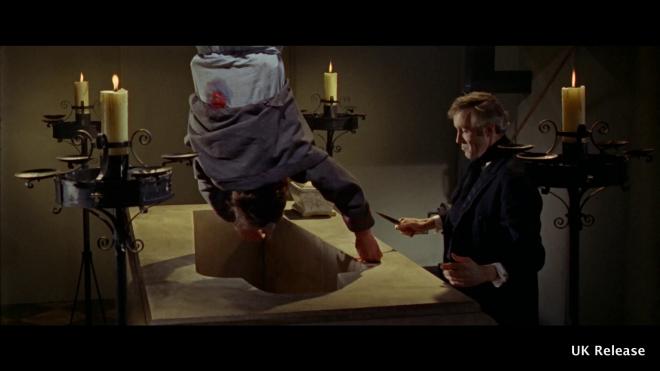 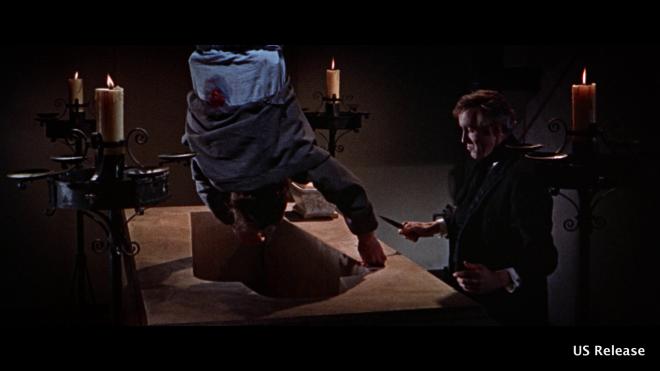 Having missed the previous 2013 Millennium Media disc, I don't have that as a basis of comparison. From the looks of some screencaps, the UK Release is sourced from the same 2.35:1 1080p transfer while the US Release complete with original 20th Century Fox fanfare intro has been sourced from a new 4K scan of the interpositive from the 20th Century Fox vaults. The picture quality differences between the two transfers are very noticeable and quite striking. The UK Release appears to be older, and features some noticeable DNR in places and has a very different color scheme with very heightened yellows. Some fine film grain remains and details for well-lit scenes do look pretty good with decent image depth.

The UK Release offers bold primary colors true what one would expect of a traditional Hammer releases with that bright syrupy red blood. Flesh tones are a little on the yellow side but still look healthy. Primaries are active and enjoy a nice vivid robust presence. Film grain is fine and apparent, but there is some evidence of a smoothing effort - some shots look a tad on the soft side. Not to say that grain has been completely scrubbed away, some facial features, costuming and production details remain in good order, but there are some moments where things just look way too waxy for comfort. Thankfully there doesn't appear to be any kind of edge enhancement there. Black levels are rich and deep allowing for wonderful inky depth. On the whole, I'd personally peg the UK Release a 3.5/5. 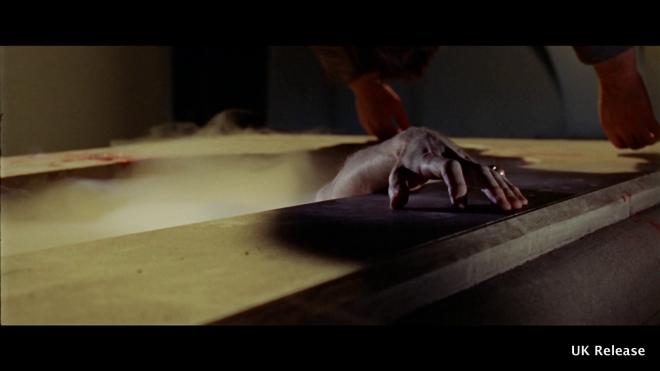 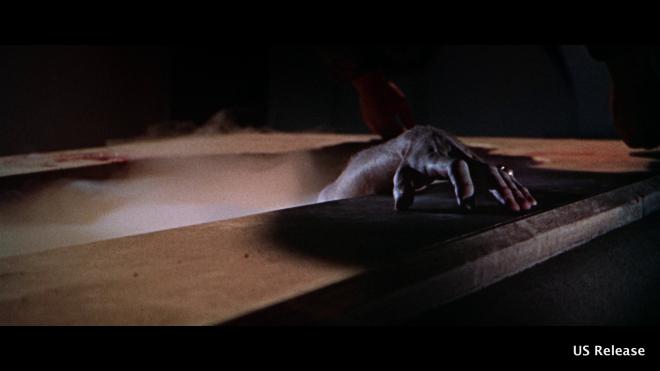 As for the new US scan - well, there is a distinct difference between a new 4K scan and a new 4K restoration. This one needs a little restoration TLC. Grain is very thick at times and unresolved making some early scenes appear as if it were being attacked by insects. There is a constant jitter to the frames that are just noticeable enough to be a little distracting. When switching between the two versions, details can vary from shot to shot. The opening staking scene in the UK Release is much darker looking - more like a day-for-night shot with notable DNR wiping away some fine detail. The US Release is brighter looking like a full daytime scene and does offer some finer details - especially in the tree bark and clothing. However, that heavier grain can be distracting.

Colors may also be a bit of a sticking point for some. Things do take on a more natural appearance with healthier pink-ish flesh tones, yellows are pulled back significantly, and some scenes like Dracula's first big reveal is much darker and shadowy losing that bright red background to almost complete blackness. The Source elements also have some age-related wear and tear including speckling, scratches, and some occasional staining. While it's cool to see the subtle and small differences between releases, I do wish the US release had undergone some measure of a proper resurrection. I'm pegging the US Release at a 3/5. 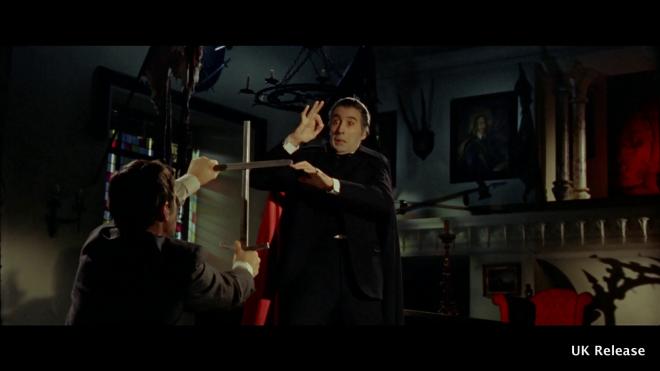 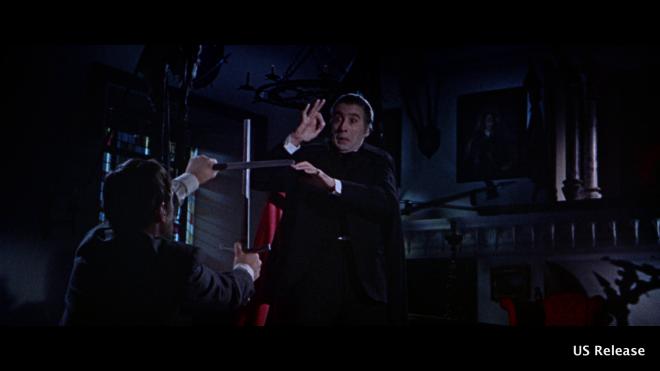 Both presentations are imperfect and flawed in their own unique ways so it'll ultimately come down to user preference. I prefer the UK Release only because the bright and vivid primaries feel more natural to me for a Hammer horror film of this sort - even though I lament the use of DNR and the loss of some finer details. 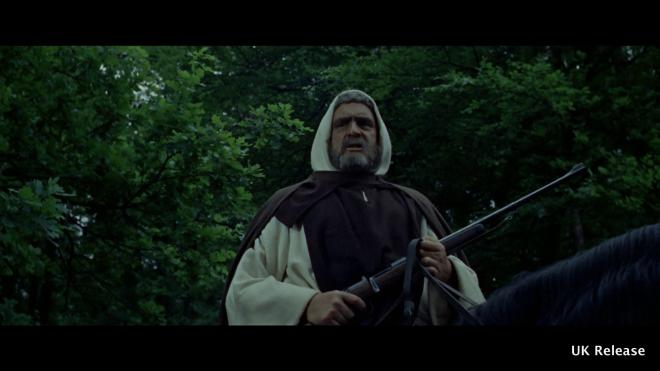 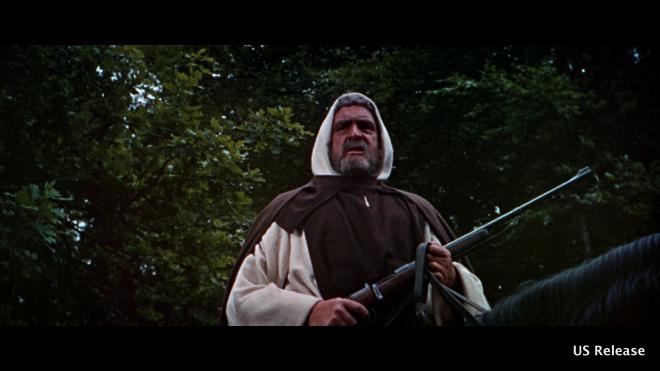 This Prince of Darkness enjoys a delightfully atmospheric and present DTS-HD MA 2.0 mono mix. Dialogue is clean and clear throughout - which is a good thing because there is a lot of it before our titular monster rises from his crypt. Sound effects and atmospherics are on point delivering a lively soundscape. The opening "funeral" sequence is a stand out offering up a mass group of people complete with hushed voices, rustling leaves, and the sounds of birds chirping in the distance. Another great bit is during the resurrection sequence where it sounds almost as if every drop of blood was recorded for our enjoyment giving the torrent a delightfully horrific gloopy quality! As Dracula doesn't say anything himself, Christopher Lee makes do with some great hisses and grunts to give his silent role some menace. Toss in the moody and creepy score by James Bernard and you have a solid audio track for a fun little fright flick. 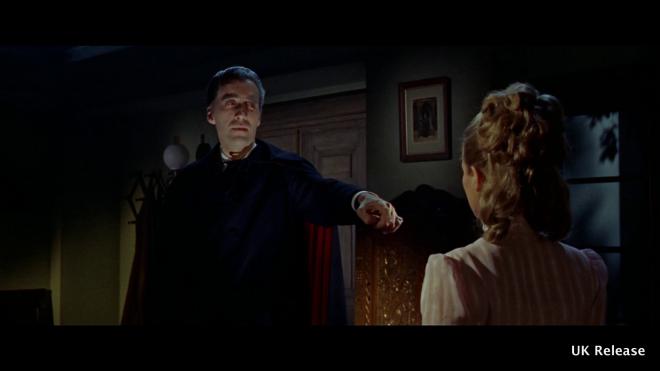 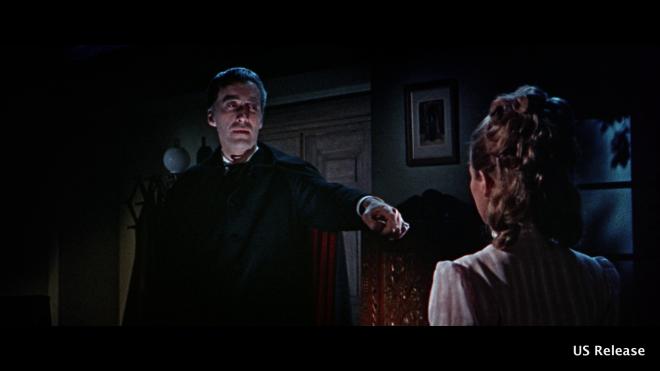 If having both versions of Dracula: Prince of Darkness weren't enough, Scream Factory has gone full out resurrecting the older archival bonus features from previous releases as well as supplying two new Audio Commentaries. All around the commentaries from the various filmmakers and historians are great listens. They're certainly not as entertaining as the Cast Commentary featuring Lee, Farmer, Matthews, and Shelley, but they're worthy informative listens. This really is a packed Collector's Edition release that does the film justice. 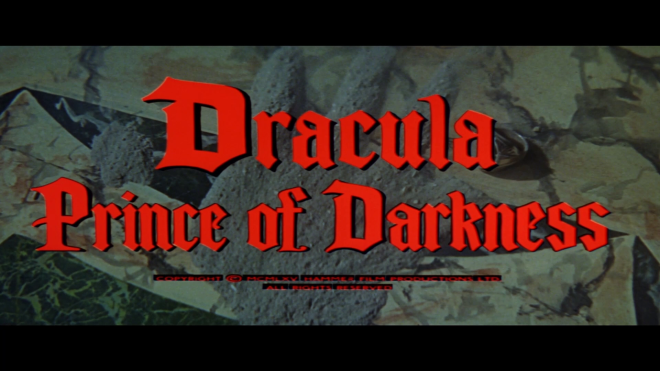 Dracula: Prince of Darkness may not be as strong a film as Horror of Dracula, but it's a fun and worthwhile sequel. Although Christopher Lee may have limited screen time, he's in prime form and just as menacing as ever giving the character life through hisses and body language. Not to mention his resurrection scene is one of the gnarliest things the entire series of Hammer Dracula movies managed to cook up! It's slow, it takes its time, but it's entertaining the whole ride through.

Scream Factory truly delivers a worthy Collector's Edition release offering up both cuts of the film and numerous bonus features that will keep you occupied for several hours. The transfers between the UK and US Releases will likely be a bit of a sticking point for fans as they offer unique plusses and minuses in their respective presentations. Ultimately that's going to come down to user preference. Overall this is still a great release truly giving fans a complete package - Recommended.

Sale Price 21.99
List Price 34.93
Buy Now
3rd Party 32.89
In Stock.
See what people are saying about this story or others
See Comments in Forum
Previous Next
Pre-Orders
Tomorrow's latest releases