Christopher Plummer is Sherlock Holmes with James Mason as Dr. Watson - together they fight the evilest of historical villains - Jack the Ripper Bob Clark's Murder by Decree. Those familiar with the last 40 years of conspiracy theories about the identity of dear old Jack may find this material familiar, but the great cast and impressive production effort keep the story fresh and suspenseful. Kino Lorber Studio Classics delivers a decent Blu-ray release offering a passable video transfer with an engaging audio mix to match along with two excellent audio commentary tracks. Not a perfect release, but at the very least Worth A Look.

No mystery is too big or too complicated for the world's greatest detective Sherlock Holmes (Christopher Plummer) and his amiable partner in criminal detection Dr. Watson (James Mason) to solve. As the body count in the seedy part of London known as Whitechapel rises and the murders becoming more grotesque, Sherlock is called upon by locals to investigate. While he expects to identify the murderer - Holmes doesn't expect to uncover a secret so dark and sinister it reaches the upper echelons of English society as he races to save lives. 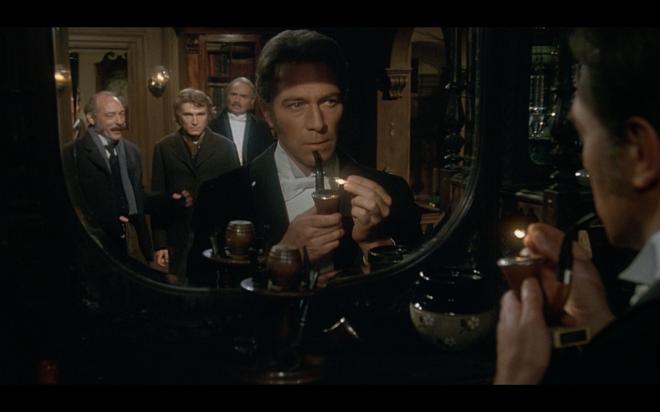 When I was 10 years old my parents took me and my sister to London, England for a vacation. My Dad worked in the auto industry in Detroit and traveled for work quite a bit so his saved up frequent flyer miles and hotel points finally paid off. It was a really exciting trip but the thing I loved the most about it was a visit to the London Dungeon. It was a ghastly tour of grotesque historical moments and means of torture that'd make Professor Jarrod from House of Wax 3-D proud. One new exhibit that absolutely terrified me was dedicated to the crimes and theories about the identity of Jack the Ripper. Not much scared me as a kid, I saw a lot of horror movies early, but just hearing the details about the mutilated victims led to more than a few sleepless nights. But - it also made me a Jack the Ripper aficionado. After finding various books and a few terrible made for television movies, I stumbled across Bob Clark's 1979 Sherlock Holmes thriller Murder by Decree.

As one of the most famous unsolved crimes, the identity of dear old Jack remains a fun "who could it be?" meditation. While there are a number of very plausible theories, one of the most famous - and probably least likely - involves the monarchy covering up the secret marriage and birth to an heir to the throne. If you've seen From Hell or better still read Alan Moore's incredibly well researched graphic novel, this theory and thus the plot of Murder By Decree will be very familiar to the point of being spoiled. But that doesn't mean this movie isn't worth your time.

While an inconsistent director - especially in his later years - I do have to tip my hat to Bob Clark for his handling of the material. Mixing Arthur Conan Doyle's Sherlock Holmes and Dr. Watson into a series of real-life events and characters was a fun and smart way to inject the audience into the events. As Holmes and Watson uncover a piece of evidence - so too the audience gets a nice little dose of historic facts. A few changes were made to fit the narrative, they also changed the names of some key players for reasons beyond me as those people were long dead by the time the film was made, but on the whole, it hits a lot of major beats of this theory. A Study in Terror from 1965 essentially does the same thing, but I don't think nearly as well as this film.

Through it all, Christopher Plummer provides an energetic fastidious Sherlock Holmes who manages to let himself get personally involved in the case while James Mason provides a smart and able counterpoint with Dr. Watson. So often Watson was depicted as a bumbling dolt to be "schooled" by Holmes that it's refreshing to see Mason get to be an intelligent player putting together pieces of the puzzle in his own way.

The production design is first-rate here. With a mix of historical locations and intricately designed reconstructed sets, dark, grimy old London comes to life. Caught with the intentionally soft old-worldly cinematography of Reginald H. Morris who lent his eye to Superman: The Movie, as well as Bob Clarks other ventures Black Christmas and A Christmas Story, creates an eerie and suspense-filled atmospheric look. While the story may stumble here and there, a few sequences do drag a bit as the film crosses the two-hour line, but the effort was there and you can feel all the players giving it their all. Even knowing most of the plot beats from other sources, this movie still had a few fun surprises to pull out of its bag of tricks.

Murder By Decree finally makes its way to Blu-ray thanks to Kino Lorber Studio Classics in a single disc release. Pressed on a Region A BD-50 disc the disc is housed in a standard case. The disc loads to a static image main menu with traditional navigation options.

To begin the discussion of Murder By Decree's newly sourced 1.85:1 1080p transfer supplied by StudioCanal - one must understand this film has a very intentionally diffused look as it underwent additional processing during post-production to give the image that hazy dreamy quality. I mention cinematographer Reginald H. Morris' other films like Black Christmas and A Christmas Story as this film offers those same hazy details, heavy grain, hot whites, and slightly washed-out colors - only dialed up to 11 but also hampered by what looks to be a very dated source that appears to have been simply upscaled to 1080p.

While I haven't gotten to look at the old Anchor Bay DVD in some time as my copy met an untimely end inside a friend's car on a hot sunny day - I have to admit that this new presentation doesn't offer up much improvement. Looking at how other Morris shot films have enjoyed impressive improvements on recent Blu-ray and 4K Ultra HD Blu-ray releases, I'm a bit let down with this transfer. It's okay - it gets the job done. But that's it. It would appear that StudioCanal more or less dumped Kino with a dash-off rather than a true restoration effort. 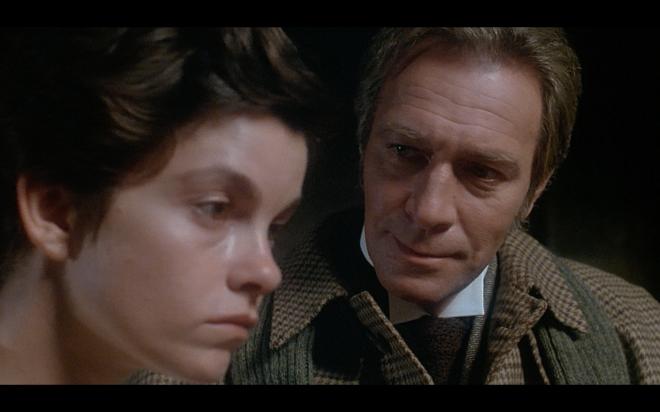 There are some interior moments and outdoor daylight sequences that look pretty damn good - Watson interviewing prostitutes is funny but it also looks great - but so much of the film has a gloopy unresolved grain structure that fine lines and crisp clean details are hard to come by. A mid-point sequence where Holmes races to speak with Mary Kelly is an example of how good the movie could look with clean lines, details, and somewhat stable grain. Then you have a sequence shortly after where Holmes talks to Geneviève Bujold's Annie Crook and it's an example of how smeary and gloppy this film can look - especially if anyone is in soft focus. Sequences with Donald Sutherland's flashbacks are equally problematic vacillating from decent details and imaging to smeary and gloppy.

While that old DVD was soft on details, it at least didn't look like it was processed through cheesecloth that someone was fiddling with all the time. As much as this transfer does get right in replicating the intentionally designed look of the film, it misses an equal number of marks. Again, I don't know the particulars of the source of this transfer, but a more recent restoration and scan could have done a world of good for this one. Most of the time it's pretty decent, there are just some glaring drawbacks. Hey… it's at least better than my old LaserDisc which is sadly succumbing to rot.

The good news with this release of Murder By Decree is the DTS-HD MA 2.0 track. The mix is well balanced allowing for clean and clear dialog. Early in the film when Holmes and Watson are at the Opera a few of Plummer's lines sound a bit muddy, but that was the only oddity I ever noticed. Throughout the rest of the film, it isn't difficult to follow what's being said even in busy crowd scenes or a few of the action moments. Scoring by Paul Zaza and Carl Zittrer is well resolved and lends itself to the drama and suspense of the film. Imaging is decent enough as much of the film is conversational there's not a lot of channel movement, but a chase sequence and the finale punch things up. Atmosphere is also well defined allowing for enough echo in those foggy streets to feel authentic. Levels are spot on as I never felt the need to alter my volume during a couple of viewings.

Bonus features may not be plentiful but we get two terrific audio commentaries. The first is the old commentary with director Bob Clark which is nice and informative even if he can occasionally run off on some odd bunny trails. The new commentary with film historians Howard S. Berger and Steve Mitchell is engaging throughout as the pair practically fight over who gets to offer up an interesting detail about any given scene as they're clearly both fans fo the flick.

Murder By Decree may not be the greatest Sherlock Holmes film - but that statement is almost impossible to quantify as there have been hundreds of Holmes movies throughout the decades. I have a firm love for this movie as one of my favorites alongside Hammer's Hound of the Baskervilles. This is a fun historical "what if?" sort of movie with Christopher Plummer delivering a passionate and determined Holmes with James Mason stepping in as an amiable and capable Watson. Kino Lorber Studio Classics delivers Murder by Decree to Blu-ray with middling results in the video transfer department, but the audio is decent and the commentary tracks make for an interesting bonus feature package. If you're a fan who isn't still holding onto the old DVD, this one is at least Worth A Look because it is a great movie - it just could use some extra TLC.