The Hound of the Baskervilles

When you have a particular character of classical literature who has made dozens of appearances in films and television shows, it's easy to develop expectations for that character. At the same time, when you're a film studio known for primarily making a certain type of film, it can be tough for audiences to follow you onto a different path. These two aspects converged in 1959 when British studio Hammer Films segued from making low-budget horror films and decided to tackle Sir Arthur Conan Doyle's eccentric sleuth Sherlock Holmes and his dependable partner Doctor Watson with 'The Hound of the Baskervilles.' Starring Peter Cushing as Holmes, Andre Morell as Watson, and Christopher Lee as the heir to the Baskerville curse, the final effort is one of the most energetic and entertaining takes on the famous detective and his most infamous case.

Generations ago, a maniacal nobleman Sir Hugo Baskerville (David Oxley) brutally murdered a young woman and her father on the moors of Baskerville Hall. In that same moment, Sir Hugo was set upon and torn to pieces by what has come to be known as "the Hound from Hell." Ever since the Baskerville lineage has carried this terrible curse. With the death of Sir Charles Baskerville on the very same moors, the estate has fallen to the young and headstrong Sir Henry (Christopher Lee). With another Baskerville about to face this ungodly curse, Doctor Mortimer (Francis De Wolff) has come to famed detectives Sherlock Holmes (Peter Cushing) and his partner Doctor Watson (Andre Morell) looking for help.

While Holmes isn't one to subscribe to curses and hell hounds, he does sense that there is some sort of diabolical plot in motion. Through his unusual methods of sleuthing, Holmes comes to Baskerville Hall in search of clues and facts that would otherwise elude those of a simpler intellect. Could the recently escaped mad murderer be the killer? Could the grounds keeper Stapleton (Ewen Solon) or his daughter Cecile (Marla Landi) be the killers as they stand to inherit from the estate? Could it be the butler Berrymore (John Le Mesurier) and his wife (Helen Goss) who have their own personal secrets? Could it possibly be Doctor Mortimer as he stood to gain from the death of Sir Charles? Or are the legends true and there really is a deadly hound sent by hell itself to punish the line of Baskerville? Holmes and his friend Watson will have to race against time to solve this mystery before Sir Henry meets an untimely end. 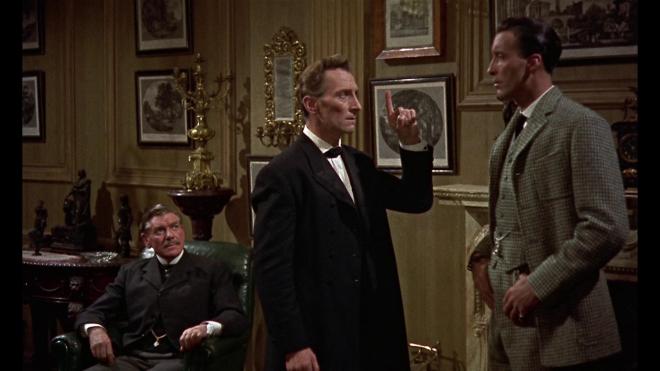 With any great piece of literature, adaptation can be a bit tricky, especially when you have to condense the work for time, efficiency, and in a way that is accessible to an audience who probably never read the original source material. When Hammer decided to shake things up and go for thematically similar but less horror-related content, fans sadly did not follow them with Terence Fisher's adaptation of 'The Hound of the Baskervilles.' This film would go on to be one of Hammer's biggest financial disappointments considering the prominent presence of regular stars Peter Cushing and Christopher Lee. Thankfully home video corrected that oversight and through the years this film has become something of a classic. While not a very faithful adaptation, there are a number of additions and subtractions to the story, the film maintains the spirit of the original work and proves to be a creepy and effective cinematic work.

What I love about this particular version of Holmes and Watson is the presentation of the characters. Peter Cushing is a fantastic Sherlock Holmes. While his eccentricities are on full display here, this time there seems to be more of a purpose behind the act. Holmes' mind runs a hundred miles a second at all times. His seemly rude or disjointed behavior is a result of his incredibly quick wit and Cushing gives the man a wonderfully manic yet still focused energy. It's fun to watch him do one thing while knowing deep down he's thinking about ten different things all at the same time. As a wonderful counterpoint to this energy is the calm and reserved approach to Doctor Watson that Andre Morell provides. In most adaptations, Watson is treated with a sense of buffoonery. Even though he's a skilled medical doctor, Watson is often made to be the butt of a joke. Here, Morell provides an astute and capable Watson. He may not see all of the angles as Holmes does, but he's just as clever and thoughtful. What's entertaining about these two and their take on the characters is how well they each play off of each other. There is a sense of respect and comradery between the two that makes you believe they've been at this job for years.

It's also fun to see how the two actors work with Christopher Lee. Lee, while an important character, is still a side player and not always the focus of the film. But because of his character's importance Cushing's Holmes and Morell's Watson handle their charge differently. Holmes far more abstract and indirect while Watson works from the gut and isn't above charging out towards the danger with the man he's supposed to protect at his side. Taking all three players together, it's quite easy to see they enjoy each others company and work tremendously well together.

The best part of watching this version of 'The Hound of the Baskervilles' was reconnecting with it after more than 25 years. I was probably all of six or seven years old when my Dad rented it and we watched it together. I think I had a difficult time following most of it, but I do remember that damned hound at the end. That thing freaked me out as a kid and it's still effective all these years later. Another part of watching this film again is taking stock of how genuinely good it is. While it wasn't a large production and reused several sets from previous Hammer horror films, it's an earnest effort and looks fantastic on screen. The cast gives it their all and the spry direction keeps the movie moving at all times. The film finds its pace and doesn't let up and it is always a good show. It's actually a shame that Hammer didn't produce any additional adventures of Holmes and Watson under the care of Cushing and Morell, it would have been nice to see more from these guys.

'The Hound of the Baskervilles' arrives on Blu-ray courtesy of Twilight Time and is part of a limited edition of 3000 units. Pressed on a Region Free BD50 disc, the disc is housed in a standard clear Blu-ray case and comes with a booklet containing stills and an essay from Julie Kirgo. The disc opens directly to a static image main menu with traditional navigation options.

The 1.66:1 1080p transfer provided for 'The Hound of the Baskervilles' is a case of win some lose some. On one hand, film grain is visible ensuring that a minimal amount, if any, DNR so that's a win. On the other hand, the film can appear inconsistently sharp and well-detailed one shot and in the very next shot within the same scene, the image can appear very soft as if there were some focus issues during the original shooting, so that's a loss. It's a 50/50 presentation that may irk some die-hard fans of the film. Colors are a bit on the faded side of things as primaries are very subdued and rarely pop as one would expect. The print sourced for this transfer is in decent shape, some mild speckling and a couple scratches and hairs here and there, but nothing to get too twisted up about. For reference, I took a look at a friend's copy of the DVD and I have to admit this is a huge improvement, even with the issues I previously mentioned. While not as great as one could have hoped for, it could absolutely use a fresh scan and some restoration work, but it's nowhere near as bad as it could have been.

'The Hound of the Baskervilles' arrives with a wonderful English DTS-HD MA 1.0 mono track. Dialogue comes through crisp and clear without any issue. Sound effects, as restrained as they are by the single channel, sound natural and present with a nice amount of space around the elements. The score by James Bernard is a delight and gives the film a nice eerie tone without interfering with the other audio elements. Aside from a couple pops in the track, there aren't any age related issues to speak of. All around, this is a fine audio track that serves the film well.

Audio Commentary: Film Historians Paul Scrabo, Lee Pfeiffer, and Hank Reineke provide their thoughts on the film with plenty of information about the production.

Actor's Notebook: Christopher Lee: (SD 13:00) This is a great interview with the late actor who shares a number of fond memories about working on the film.

Margaret Robinson Interview: (HD 14:52) Margaret was the mask maker who made the hound mask for the dog at the end of the film. It sounded like a difficult process creating a mask for a dog but she offers some fun production insight.

'The Hound of the Baskervilles' is a great piece of nostalgia. I hadn't seen the film in years and was greatly relieved to see that it is still wildly entertaining. Plus, you can't go wrong when you've got Peter Cushing and Christopher Lee in the same movie together. Twilight Time brings the film to Blu-ray in fine order. The image quality shows its age but it's still pretty decent. The audio is very good, as are the numerous extra features that should keep fans occupied for some time. 'The Hound of the Baskervilles' comes recommended.