The Hunt brings upon a wonderfully funny and elaborately bloody satire on the current political divide in the United States with a Hunger Games-like situation where the liberal elite drug, kidnap and force a group of republicans to survive the night while being hunted with various weapons. It's all fun and games until someone steps on a landmine, blasting them into a pit of steel spikes. This Blu-ray comes with a 1080p HD transfer and an impressive DTS-HD 7.1 audio track along with a few short bonus features. Highly Recommended! 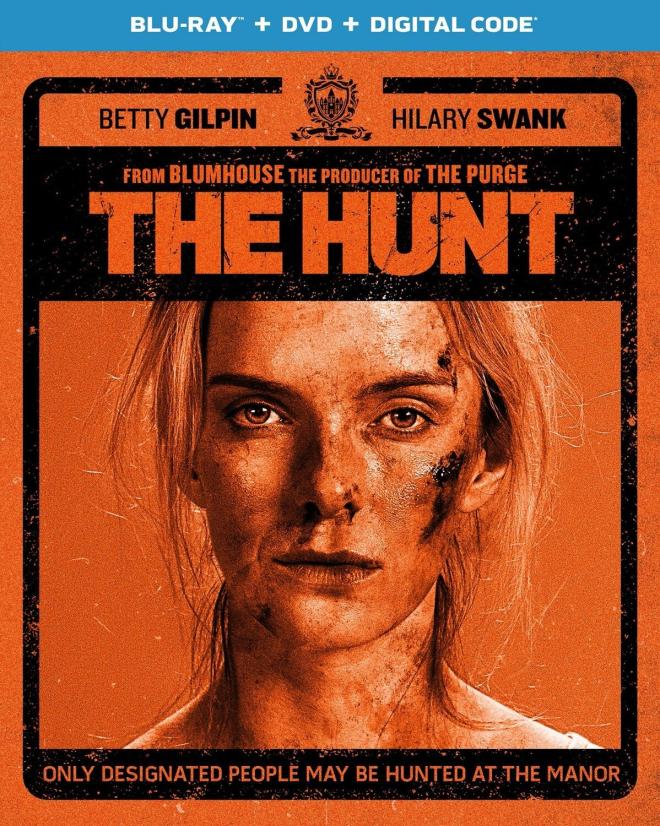 Director Craig Zobel (Compliance), producer Jason Blum, and writers (Carlton Cuse, Damon Lindelof) of LOST fame could have never predicted the events that led up to their film The Hunt being canceled and moved back months after its original debut on the big screen. Not only were there a couple of mass shootings that occurred, but the current US President mentioned the film in a negative way without seeing it and thus had this funny-as-hell and a bloody good time of a movie pushed later in the year. With that insane amount of free publicity, The Hunt became the most curious film to see, which was certain to raise major controversy with its subject matter being a modern-day Battle Royale between the extreme political divide of this country. The result is a significantly funny film that mixes in some major slapstick violence that would make Quentin Tarantino excited along with some corny dialogue and a few subtle witty ideas. The Hunt is a ton of fun and gives a healthy poke to both sides of the spectrum.

The Hunt is not a serious film whatsoever and never allows itself to cross over into a preachy one-sided message about what’s right or what’s wrong. On the contrary, this is a silly satire with enough blood and guts for a Stuart Gordon film that pokes fun at both ends of the political landscape. It’s a quick, tight 90-minute carnival ride that packs laughs and hilariously shocking moments for each character.

The film centers around a group of people who have been drugged, kidnapped, and flown to a secret location, only to wake up with sexual mouth gags locked on their faces in a large open field. These people manage to unlock their muzzles where they open up a large wooden crate that has a ton of weapons of all shapes and sizes inside. Before anyone starts asking questions, a bullet whizzes by, and a skull is blown clean off. It’s soon realized that all these unfortunate people have one thing in common - they’re mostly redneck republicans, being hunted by the rich, elite liberals, due to their differing beliefs.

The violence is not made in a serious or melancholy manner, but rather a stylized cartoonish way. It’s not all about gun violence either. More often than not, arrows, landmines, and kitchen appliances are used to ward off an attacker to great comedic effect. This all culminates in a Kill Bill style climax between two opposing women, Betty Gilpin (Glow) and Hilary Swank (The Next Karate Kid). The gore and fight choreography is top-notch and the one-liners by everyone involved are so bad that they’re painstakingly great. The motive behind this bloodbath in the story is simple and less thought out than it should be, but then again, that plays into the political climate today, which was a wonderful parallel.

The performances from all the actors, no matter how big or small were wonderful and were infectious in the way that they were having a blast on set. The Hunt is not here to offend anyone, but rather to spark a big laugh and make society take a step back and look at themselves and have a chuckle about how violently serious everyone became about politics and thinking a different way. The Hunt is a hell-of-an entertaining film and loads of fun.

The Hunt scopes its way to Blu-ray from Universal Pictures in a Blu-ray + DVD + Digital Code combo pack. The discs are housed in a hard, blue plastic case with a cardboard sleeve, featuring the artwork of Betty Gilpin all bloodied and bruised. There is an insert for the digital code. 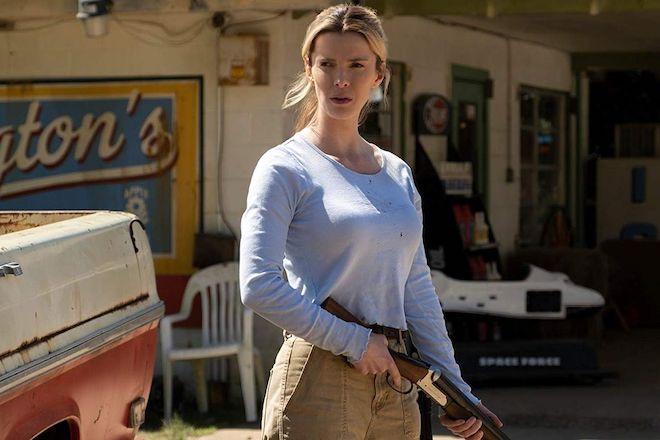 The Hunt stalks its way to a 1080p HD transfer on Blu-ray in a 2.39:1 aspect ratio with some excellent detail and a. gory color palette that should satisfy genre fans.

The color palette is somewhat muted with the exception of a few elements. The first scene takes place inside a first-class private jet that is steeped in electric blue lighting with bright red outlines with the faintest white light shining from above, signaling the American flag perhaps. The color scheme is deep and rich here, but once on land, the colors are mostly muted with some anemic greens and blues that almost look grayish. Even the primary colors in the wardrobe choice are vaguer. That said, when the blood starts flying and any choice red color shows up on the screen, it's bright, bold, and pops tremendously. That's the case for the entire film, and it's a stylistic choice for story purposes. The black levels are mostly deep in the lower lit sequences without any bleed over, and the skin tones are a tiny bit paler than normal.

The detail is quite vivid from start to finish, even with the muted color spectrum, revealing all the necessary makeup effects and practical gore that's on display. Every bit of entrails and guts look wonderfully disgusting as do the wounds and cuts on the actor's faces when the camera zooms in close. Their individual hairs and facial pores also look good. The textures and stitching in the clothing stand out in well-lit sequences and background items still show off enough detail that never crosses into soft territory. Lastly, there were no big instances of any banding aliasing or video noise to speak of. 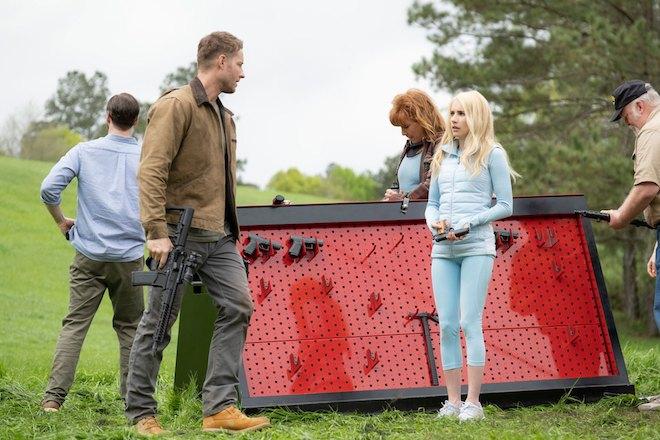 The Hunt comes with a fantastic and lively lossless DTS-HD MA 7.1 audio track that is highly engaging and chaotic. From about five minutes in, the bullets and arrows start flying, which is where the speakers utilize their directionality as each bullet and arrow whizzes past each speaker with precision and accuracy, leading to a smooth transition of sound. These bullet hits and gun blasts also pack a punch when fired right on the screen, especially the big shotgun inside the gas station. Grenade explosions and body parts falling all over the place all have that unique squish and gooey sound when they hit the floor. It's funny and gross at the same time.

Ambient noises of people yelling in far distances, shouting, nature sounds, and more all sound robust and loud as well. The score amplifies the situation at every turn while never drowning out any other element. The bass kicks in when vehicles are driven and gun blasts go off, which is fairly consistent. Lastly, the dialogue is crystal clear and easy to follow along with, even with the thick cartoonish southern accents. 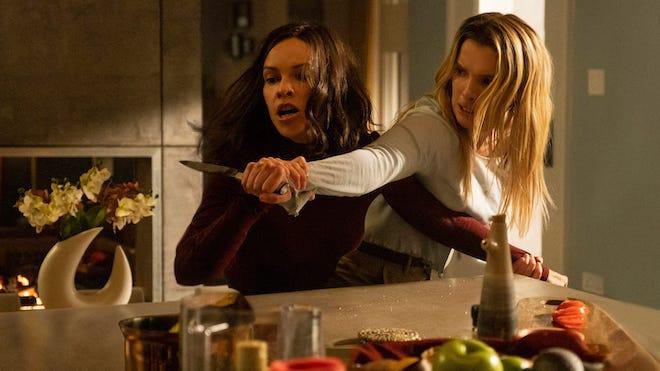 There are less than 11 minutes of bonus features included on this Blu-ray, which is a shame because this could've been jammed packed with great content. Instead, this trio of extras is more or less just a promo EPK piece with very little behind the scenes footage and a few talking-head interviews that is mostly overlayed on clips from the film. 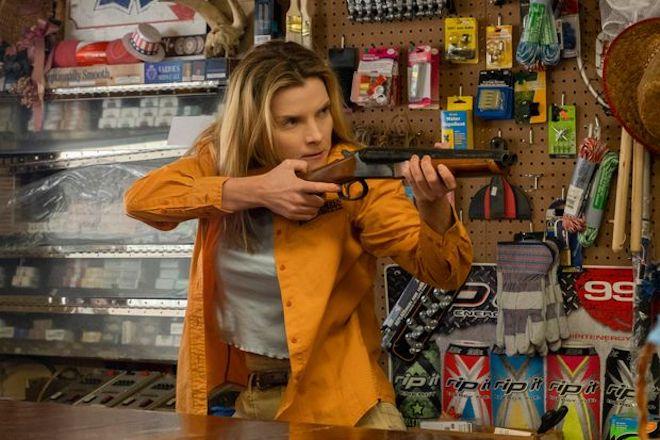 The Hunt is a highly entertaining, and downright hilarious film with over-the-top antics that comes complete with a satirical message about the current state of politics in the USA. This shouldn't offend anyone, due to its cartoonish take on the whole situation, and its sincere quality of not judging a book by its cover. The video and audio presentations are both great, but the three extras are less than desired. Still, this movie is a joy and comes Highly Recommended!