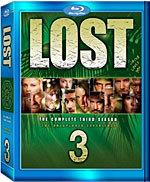 I hesitate to name 'Lost' as one of the greatest television series of all time just yet. Having just passed the mid-point of its planned six-season run, the show still has plenty of ground to cover and an unfortunate potential for things to go wrong. The history of the television medium is filled with once-great programs allowed to drag on past their primes and outlive their usefulness. The pessimist in me can't stop thinking about Executive Producer J.J. Abrams' last series, the spy drama 'Alias' that started out so brilliantly but fell completely to pieces a few seasons in and never recovered. Is history doomed to repeat itself?

I shouldn't torture myself with such thoughts. Rewatching the episodes of this 'Complete Third Season' reveals no evidence of artistic decline despite the astounding complexity of the show's sprawling, multi-layered narrative. In fact, the opposite has happened. After three seasons of expansion, the series has only grown more fascinating, suspenseful, at times baffling and even infuriating, yet utterly transfixing. That's not to say that this third season didn't give fans plenty to gripe about during its network run, but looked at as a whole, the show's staggering ambition and attention to character, plot, and psychological development remain unparalleled by anything else currently on television.

Concerning the adventures of the varied survivors of Oceanic Flight 815, a doomed jetliner that crashed onto a mysterious uncharted island somewhere in the Pacific Ocean, 'Lost' skillfully combines the elements of action adventure, conspiracy thriller, and supernatural intrigue into a labyrinthine mystery plot that grows deeper and more complex with each successive season. For each new mystery that is resolved within the program, invariably another opens immediately up. It's a lot to ask from a weekly television audience, and it continues to amaze me that the show has remained so popular this far into its run. Its appeal is no doubt due in large part to the large cast of compelling characters, each of whom has been granted an extensively detailed backstory revealed in flashback structure within the episodes. As the ongoing mystery plot moves forward, the character stories reach backward, each end broadening and deepening our understanding of the other.

We learned in previous seasons that our crew of Losties are not alone on the island, and the third season spends most of its time exploring their interaction with the enigmatic and menacing Others. The show is famous for its knockout season openers, and this one certainly begins with a whopper of a revelation. As the story progresses, we learn reams of information about the Others' leader Ben, and are introduced to his strangely sympathetic confidante Juliet, who will become one of the key movers over the course of the season. Often criticized for asking more questions than it answers, 'Lost' in fact provides conclusive answers to a number of outstanding mysteries from past seasons this year, all the while setting up many new ones to ponder in the future.

Even more so than other serial dramas, 'Lost' requires a viewer to watch every episode in sequence, and pay strict attention to the ever-expanding number of clues hidden in every scene. The use of subliminal imagery has fans routinely recording and freeze-framing scenes for enhanced scrutiny. Previous seasons left viewers frustrated by the typical network programming schedule, mixing new episodes with repeats throughout the course of the year. To address those complaints, the third season was developed in two distinct parts. The first 6 episodes were aired together in the Fall, with the remaining 17 held back for a sequential run in the Spring, a programming strategy that had recently worked successfully for 'Prison Break' on the Fox network. Unfortunately, many fans didn't much care for its implementation on 'Lost', arguing that the first part of the season spent too much time with lead characters Jack, Kate, and Sawyer held captive by the Others, that the break between parts was too long, and that the latter half had too many "filler" episodes (such as Hurley's discovery of an abandoned van in the jungle) that didn't seem relevant to the main plot. Most of those complaints melt away when watching the season on home video, a viewer's impatience at being withheld answers for weeks at a time tempered by the ability to watch at their own schedule now. This season is in fact just as tightly structured as those previously, and by the finale we revel in ecstatic glee as seemingly-mundane details and hints dropped in earlier episodes come back around to prove their importance later.

Perhaps the most controversial aspect of Season 3 was the introduction of supporting characters Nikki and Paolo, a pair of background players brought to the forefront in a number of episodes. Their integration into the leading cast was not much embraced by fans, who quickly voted them the most hated characters on the show. What's odd is that they really don't do anything to inspire such venom, other than to stand around with the main cast when presumably they aren't really needed. Nikki and Paolo are eventually given their own backstory episode ('Exposé') halfway through the season that finally gives them a point and purpose, and it's a doozy, completely throwing our assumptions about the characters for a loop, and revisiting many famous moments throughout the series to view them from a new perspective. The episode proved to be the most divisive of the entire series run, with many fans (myself included) finding it one of the most clever and entertaining of the season, and many others declaring it the Worst Episode Ever. I truly believe that the episode will be better regarded over time, once some of the bitterness toward the characters wears off.

'Lost' has demonstrated its ability to grab an audience's attention with shocking developments in each of its season premieres, and (at least in these last two years) an equal capacity to screw with a viewer's head during its season finales. In case you didn't think the second season capper, in which the Swan station hatch imploded and the sky turned purple, wasn't enough of a mind-warp, just wait until you see what the writers have in store this time.

Three years in and still going strong, 'Lost' is unquestionably, by a large margin, the best show currently on television. It thus far stands toe-to-toe with some of the most daring, innovative, and ambitious series of all time, including the surreal mysteries 'The Prisoner' and 'Twin Peaks', elements of which it has clearly incorporated (the 'Prisoner' influence is especially pronounced this season). I sincerely hope that the show's writers and producers can maintain the intrigue and excitement through to their planned conclusion without falling victim to the pitfalls of declining quality that have affected too many other great series. It would break my heart if this show were to fall apart in its later seasons. 'Lost' is simply too good to deserve such a fate.

'Lost: The Complete Third Season' comes to Blu-ray from Buena Vista Home Entertainment in a 6-disc box set subtitled "The Unexplored Experience." The discs are held in a single multi-panel keepcase stored within an attractive yet sturdy and space-conscious box. Under the front panel of the box is a special note to Blu-ray owners from Executive Producers Damon Lindelof and Carlton Cuse extolling the virtues of the format and promising exclusive content not available to "the poor suckers who didn't spring for the Blu-ray spectacular." Also included is a small printed booklet with an episode and bonus features listing, but be warned that the episode descriptions contain numerous plot spoilers.

Like most Disney releases, the first and last discs of the set are burdened with annoying trailers and promos before the main menus. Fortunately, in this case they can be skipped using the MENU button on the remote.

Perfect. Stunning. Amazing. Those are just a few of the words to describe the video quality of this 'Lost' Blu-ray set. The 1080p/AVC MPEG-4 transfers exhibit a breathtaking clarity and detail far beyond anything possible on standard DVD, and even significantly superior to the show's 720p broadcasts on the ABC network. Presented in the 16:9 aspect ratio of the episodes' original HD airings, the image is extraordinarily sharp, with no distracting edge enhancement or digital compression artifacts. Every blade of grass on the island, every stubble in Jack's beard, each one of Kate's freckles, and all the skin pores of every actor are visible in striking detail, even in medium and long shots. Colors are vibrant and bold. The contrast range is crisply delineated from inky blacks to bright whites, with an exceptional sense of depth in every scene.

A minimal amount of film grain is present in some scenes, but it has been well digitized and compressed to retain the proper film-like textures without looking noisy. The show has outstanding, feature film-quality photography and lighting, and all the lovely island scenery certainly helps to make 'Lost' the best-looking series on television, and now one of the best-looking releases in all High Definition media.

Note that as the show's opening title flies past the screen, the brief bit of artifacting visible on the letters is a flaw of the title animation itself, not a problem with the disc transfer. That issue has been present in every network broadcast and DVD release.

The Blu-ray's stellar video is well-matched with its terrific sound quality. Offered in both standard Dolby Digital 5.1 or uncompressed PCM 5.1, 'Lost' has excellent sound design that incorporates a broad dynamic range from hushed whispers to the occasional loud explosion. Dialogue is crisp and clear in every scene, regardless of environmental conditions, and sound effects are always sharply recorded. Michael Giacchino's haunting score is reproduced with pleasing warmth and fidelity. Being a television production, the show doesn't get too aggressive with directional surround effects, but ambient jungle noises routinely fill the soundstage to create a satisfying sense of envelopment. 'Lost' is also one of the best-sounding shows on TV, and the PCM track in particular does it full justice.

All of the bonus features from the DVD edition have been carried over to the Blu-ray, with most encoded in High Definition video.

Buena Vista knocks one out of the ballpark with this outstanding 'Lost: The Complete Third Season' box set, featuring spectacular video and audio quality among the best available on all High Definition media. It sure doesn't hurt that the show is so damn good as well. If there's any weakness here, the bonus features promise more substantive content than they actually deliver, but there's still some good material in there, and I suppose we shouldn't really expect the show's producers to give away all their secrets, as much as we may want them to.

This is a great Blu-ray release, highly recommended for any fan of the series, even at its hefty list price. However, it should go without saying that the 'Lost' storyline requires a viewer to start at the beginning. This is a long-form narrative, and much like a novel you shouldn't expect to jump in at the middle and understand anything that's happening. I beg, absolutely beg, Buena Vista to please complete the collection and give us the first two seasons in High-Def as soon as possible.

Sale Price 22.99
Buy Now
3rd Party 18.95
In Stock.
See what people are saying about this story or others
See Comments in Forum
Previous Next
Pre-Orders
Tomorrow's latest releases