Tales from the Darkside: The Movie

Hot off the successes of Creepshow and Creepshow 2 - George Romero and producer Richard Rubinstein put their weight behind serialized anthology horror television with Tales from the Darkside. With the success of that show The Movie takes the same basic concept of short individual horror stories and loosely joins them together with a framing device of a kid reading a book as he awaits an untimely end. 30 years later the film is still a lot of fun offering great entertainment with a few good jumps. Scream Factory delivers Tales from the Darkside: The Movie to Blu-ray with a solid A/V presentation along with a host of excellent bonus features making this a worthwhile Collector's Edition release. Recommended.

Poor Timmy (Matthew Lawrence) has been kidnapped by Betty (Debbie Harry) and is about to be cut up and turned into dinner for her friends! Desperate to buy time, he reads to Betty three stories of horror from the book Tales From The Darkside. A story of a mummy killing a college student's rivals, a hitman hired to kill a cat, and an artist's doomed romance are all Timmy has to keep Betty from turning him into the night's main course. 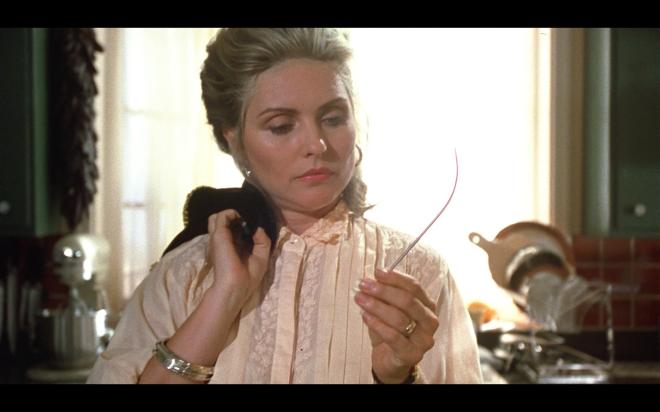 Horror anthology shows and movies can go one of three ways; they work and are really entertaining - Creepshow or is an outright classic such as Kwaidan, or the original Tales from the Crypt (1972). They're a middling effort like V/H/S but still offer some entertainment... or they bomb out and miss the mark entirely. While not a terrific example, Tales from the Darkside: The Movie is certainly better than average offering plenty of replay value beyond the hue or rose-colored nostalgia glasses.

George Romero's time with anthology movies and television shows defined his output for a large portion of the 80s. Creepshow was a fun return to the old E.C. Comics aligning the Night of the Living Dead filmmaker with Stephen King. Creepshow 2 was a bit of a bust aside from The Raft as stretching the concept a little too thin for its own good. But Romero rallied with Tales from the Darkside bringing serialized science fiction, horror, and suspense back to television. And as with any successful television venture, a movie version must follow. Tales from the Darkside: The Movie is effectively a good version of Creepshow 3 without the comic book infused wraparound to hold the stories together.

Series director John Harrison worked this feature as a fitting continuation to the television show giving fresh life to Michael McDowell's story Lover's Vow, Stephen King's goofy with a gory payoff Cat From Hell, and Arthur Conan Doyle's mummy story Lot 249. If we're judging strictly for fright value, Tales from the Darkside: The Movie may not measure up for genre fans. These horror stories have a firm tongue in cheek sense to them. The only real genuine piece of horror-tragedy is Lover's Vow about an artist (James Remar) who encounters a demon and falls in love with the perfect woman (Rae Down Chong) with horrific results. Again, not a scary story but the elements of genuine gothic horror are there with mood and gloom in excess. Lot 249 starring Christian Slater, Steve Buscemi, Julianne Moore, and Robert Sedgwick is a great mix of horror and comedy with a mummy making great use of a coat hanger! Cat From Hell based on Stephen King's short story is a silly story - there really isn't any "horror" here until the very end when we get a delightfully over-the-top and gory conclusion that every cat owner genuinely fears. All of these stories are fun and entertaining in their own ways with the Debbie Harry wraparound story delivering the final punchline.

I wouldn't call this one of my all-time favorites growing up. I was about 8 when this movie came out and I only saw it a handful of times on television edited for content. Lot 249 was the story I liked the most because the mummy was genuinely creepy and the scene with the coat hanger actually scared me. Until I rediscovered this movie in my late teens I didn't even remember Cat From Hell or Lover's Vow. Taken as a whole I feel this anthology horror movie is pretty good. Not amazing. It doesn't blow my hair back but whenever I pull it off my shelf and put it on, I'm never disappointed. It's a great way to burn 90-minutes.

As horror anthology storytelling has made a comeback, most recently with Creepshow the series, the V/H/S movies and the excellent Trick 'r Treat - simple and easy stories that wouldn't be enough to hold an entire feature get a moment to shine. Watching Tales from the Darkside: The Movie makes me appreciate the early works while also seeing new talent strut their stuff. But at the same time, watching this perfectly entertaining movie makes me wish the actual Tales from the Darkside television series as well as the full series of Tales from the Crypt were available on Blu-ray. I look on my shelf and there's a gap those two sets would fill nicely if some studio had the gumption to restore and release them. As it is, this was a fun one to revisit after a few years away, and if this is all we get of the series on Blu-ray I'm glad to have this disc.

Tales from the Darkside: The Movie arrives on Blu-ray from Scream Factory in a single-disc Collector's Edition release. Housed in a sturdy Blu-ray case with identical cardboard slipcover, the insert artwork is reversible to reveal the original theatrical poster and home video artwork. The disc loads to an animated main menu with traditional navigation options.

Tales from the Darkside: The Movie enjoys a nice strong 1080p 1.85:1 transfer. I don't think this is a very recent scan, it has what appears to be some very slight edge enhancement that isn't too distracting, but overall l I'm very happy with the results here. Film grain can be a little thick at times, namely around optical effects or some of the "cat-vision" shots - but it maintains a natural presence and details are very strong. Makeup and gore effects look great with facial and clothing details coming through nicely. The mummy suit from Lot 249 is pretty fun and pretty damn gnarly looking. Each story has a distinct color scheme with Lot 249 favoring yellows, Cat From Hell goes for bright blues, and Lover's Vow skews towards deep crimsons and purple tones. Throughout each of these stories, black levels and shadows hold strong with a deep inky presence and a welcome sense of three-dimensional depth. Some slight speckling and some very slight aliasing are present, but that's the worst of any age-related issues and truthfully hardly an issue worth complaining about. All in all, a very good looking presentation.

Tales from the Darkside: The Movie - like Graveyard Shift - arrives with a pair of strong audio mixes for fans. It's dealer's choice if you want the DTS-HD MA 5.1 track or the DTS-HD MA 2.0 mix. Both are great and provide a unique and engaging sound experience. For my dollar, I enjoyed the 5.1 mix more for the sake of the surround presence and engagement for each of the stories. There's a distinct sound presence for each little film where surround can accentuate the action. When you have a mummy shuffling around the sound of the dragging feet gets some welcome object placement. Similarly, when the cat is running around there's some great channel activity. The 2.0 mix is still very good and more in line with what most folks will remember with past home video experiences - I just like the more open and active presence of the 5.1 mix. Both mixes offer clean and clear dialog with levels that don't need to be monitored or adjusted. Take your pick - you're in good hands.

In keeping with a Scream Factory Collector's Edition, there's a lot of great bonus features content. You get the archival George Romero and John Harrison audio commentary track as well as a huge collection of new cast and crew interviews giving you a few hours of genuinely informative and worthwhile bonus features to pick through. The new David Kappes commentary with Michael Felsher is a great new track as he offers a lot of great behind the scenes info and the two provide a lively conversation without any slowdowns. The cast/crew interviews are great showcasing each story, how they made them, with the KNB effects team getting plenty of time to talk about executing the gore - great stuff.

Tales from the Darkside: The Movie isn't the greatest horror movie ever made, but it doesn't try to be. Much like its parent television series it knows exactly what it is - fun. This is a horror movie where the audience is in on the scares and you're there to have a good time. It's great stuff for the Halloween season. I have fond memories of the Lot 249 story as a kid and it'd been several years since I last sat down and watched this. I'm glad that it holds up well and still delivers. Scream Factory has done a terrific job bringing the film to Blu-ray with a strong video transfer, two clean audio tracks to choose from, as well as a few hours worth of new and archival bonus features. If you're a fan, it's nice to finally have this one on Blu-ray. If you haven't seen it and enjoy anthology horror like Creepshow - you owe it to yourself to check this one out. Recommended.