Much more than a cozy British mystery, An Inspector Calls mixes  sharp social criticism into its whodunit plot and the result is a highly entertaining brew capped by a humdinger of a twist. Elegant direction by Guy Hamilton and great performances from a stellar cast led by the incomparable Alastair Sim distinguish this snappy adaptation of J.B. Priestley's acclaimed play, which is given a top-notch Blu-ray rendering by Kino Lorber. Excellent video and audio transfers and a couple of engaging supplements enhance enjoyment of this top-notch film that comes highly recommended.

Most of us know Alastair Sim only as that cantankerous curmudgeon Ebenezer Scrooge in the best screen version of Charles Dickens' Yuletide classic A Christmas Carol, and that's a shame, because the esteemed British actor enlivened a host of other films during his 40-year career. One of the best was An Inspector Calls, a slick, captivating adaptation of J.B. Priestley's acclaimed play. While director Guy Hamilton's film at first seems like just another tidy drawing-room mystery, it soon morphs into a scathing indictment of privileged British society, and it's that searing theme that cuts like a knife across this clever whodunit.

It's 1912 and life is grand for the Birling family, as it is for much of the snobby upper middle class in Edwardian London. World War I may be on the horizon, but patriarch Arthur Birling (Arthur Young) is much more concerned with securing a spot for himself on the king's exclusive Honors List. As he and his stuffy wife Sybil (Olga Lindo) and often inebriated playboy son Eric (Bryan Forbes) celebrate the advantageous engagement of daughter Sheila (Eileen Moore) to dashing businessman Gerald Croft (Brian Worth), Arthur cautions everyone to behave themselves. As long as there are "no scandals, no monkey business" that might arouse the suspicions of the police, he says, his coveted knighthood should be all but guaranteed.

That's when - right on cue and out of the blue - an inspector calls and turns their well-ordered, seemingly bullet-proof lives upside down.

Inspector Poole (Sim) startles everyone when he drops by unannounced to pointedly question the family about a suspected suicide that just occurred. Eva Smith (Jane Wenham), a destitute pregnant woman, died after drinking disinfectant (mercy me, I hope it wasn't Clorox!), but whether she administered it herself remains unclear. She did leave a diary, however, and that has led Poole to the Birling household. At first, no one recalls the girl, but a photo and some other details jog their respective memories, and soon it becomes clear everyone in the family had a disparate connection to this poor, innocent victim. What Inspector Poole wants to know is whether any of those connections could have become deadly. 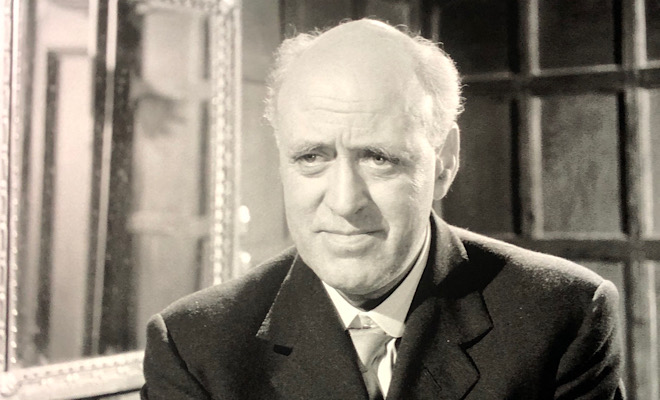 An Inspector Calls was a smash hit when it premiered on the London stage in 1946 (it later achieved similar success on Broadway), but the character of Eva was only alluded to, never seen. Screenwriter Desmond Davis changed that for the film adaptation, nicely opening up the play with multiple flashbacks that depict her interactions with the Birlings and Gerald Croft. The added scenes deepen our sympathy for the doomed Eva and heighten the impact of the arrogance, hypocrisy, and self-serving nature of the Birlings and the snooty society they represent.

Though the premise might seem a tad unbelievable - what are the odds five people from the same family would coincidentally interact with the same random person over a two-year period? - it's a clever device for presenting an incisive allegory. The narrative structure somewhat resembles Agatha Christie's Murder on the Orient Express (without the malicious intent) and especially brings to mind It's a Wonderful Life as we witness how profoundly one person can affect and influence others even without realizing it. A thoughtless action here or cross word there can have significant and reverberating consequences, and An Inspector Calls explores that theme with a delicate mixture of melancholy, venom, and wit.

Hamilton would go on to direct four splashy James Bond films and a couple of all-star Agatha Christie adaptations, but he embraces intimacy here, favoring character development over fancy technique. With such great material, there's no need to gussy it up with elaborate trimmings or cute gimmicks, and Hamilton wisely resists any temptation to do so. His briskly paced film maximizes every nuanced moment and keeps us engaged from beginning to end. 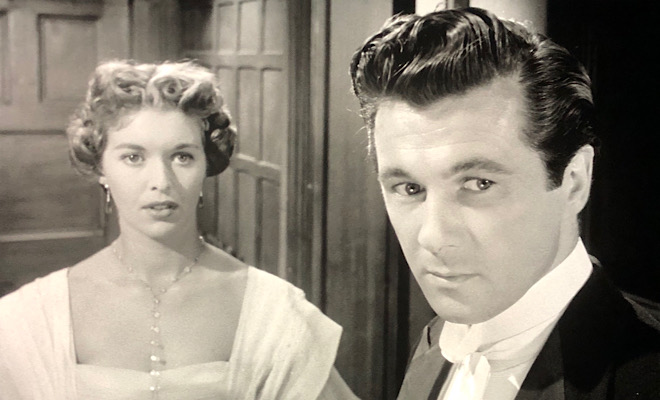 With his hound-dog eyes, bald pate, and array of animated facial expressions, Sim - as always - is an utter delight. Poole is a hold-your-cards-close-to-the-vest type of character and Sim doesn't overplay his hand, filing a restrained yet still magnetic performance that carries the movie. The only problem with all the flashbacks is there's less Sim on display, and even though the scenes with Eva serve vital purposes and hold our interest, we miss Sim when he's not on screen.

The other actors won't be very familiar to American audiences, with the possible exception of Forbes, who may be best remembered for roles in The Guns of Navarone and The League of Gentlemen. He plays his lovable cad with plenty of devil-may-care charm, but just seven years after An Inspector Calls, Forbes turned to writing and directing and achieved even greater success in those realms. He received an Oscar nomination for his screenplay for Whistle Down the Wind (his directorial debut) and went on to helm such acclaimed features as The L-Shaped Room, Seance on a Wet Afternoon, King Rat, and The Stepford Wives.

An Inspector Calls is much more than a crackling whodunit brimming with style and wit, but it's those core elements that fuel this well-crafted film and make it so entertaining. The damning portrait it paints of a haughty society teetering on the edge of extinction is an added bonus that gives the film its legs, but when all is said and done - like a good Sherlock Holmes or Hercule Poirot novel - this is a terrific movie to cuddle up with when you're simply in the mood for some good old-fashioned British mystery. 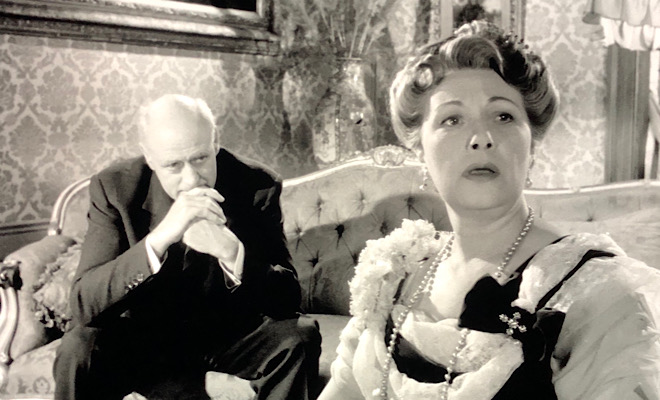 An Inspector Calls arrives on Blu-ray packaged in a standard case. Video codec is 1080p/AVC MPEG-4 and audio is DTS-HD Master Audio mono. Once the disc is inserted into the player, the static menu with music immediately pops up; no previews or promos precede it.

Kino supplies a lovely 1080p/AVC MPEG-4 transfer that exhibits surprisingly little wear and tear. Though occasionally the image errs on the bright side, excellent contrast, clarity, and grayscale combine to create a vibrant, pleasing, well-balanced picture. Evident but nicely resolved grain preserves the film-like feel, the deep black levels of the gentlemen's dinner jackets supply weight, and good shadow delineation keeps crush at bay. Rain is especially well defined, the background details of the ornate Edwardian interiors are easy to discern, costume textures come through well, close-ups are sharp, and only very minimal print damage mars the presentation. Fans of this classic mystery yarn will be delighted with this top-notch transfer that brings An Inspector Calls to life like never before.

The DTS-HD Master Audio track supplies clear, well-modulated sound. An Inspector Calls is a talky drama, so there aren't many atmospheric elements to punctuate the track, but the lack of sonic activity doesn't diminish the quality of the track. Pregnant pauses are clean, the music score by Francis Chagrin fills the room with ease, and, most importantly, all the critical interplay between the actors is easy to comprehend. No age-related hiss, pops, or crackle disrupt the action and no distortion creeps into the mix. This unobtrusive track flies under the radar, but it does its job and does it well.

A couple of supplements enhance this release.

An Inspector Calls is more than just a good mystery. Director Guy Hamilton's captivating adaptation of J.B. Priestley's enduring play not only weaves a tangled web, it also stitches some searing underlying themes into its whodunit fabric. Elegantly produced, terrifically performed by a fine cast led by the incomparable Alastair Sim, and containing a never-saw-it-coming climactic twist, An Inspector Calls holds up well and enjoys a lofty spot in the cluttered genre of British mystery. Strong video and audio transfers and a couple of good supplements distinguish Kino's Blu-ray presentation, which comes highly recommended.