Leslie Caron files a luminous, Oscar-nominated performance in writer-director Bryan Forbes’ The L-Shaped Room, a touching study of an unwed pregnant woman’s struggle to accept her situation, navigate a burgeoning relationship, and forge a life for herself. Supplements are slim, but strong video and audio transfers distinguish Twilight Time’s limited edition Blu-ray presentation of this stylish, tender, and provocative film, which comes highly recommended.

Watch any retrospective of Golden Age Hollywood musicals, and you’ll undoubtedly see a fair amount of Leslie Caron. As a fresh-faced 20-year-old, she danced memorably with Gene Kelly in An American in Paris (her film debut), and four years later partnered the elegant Fred Astaire in Daddy Long Legs. She also sings with a gaggle of charming marionettes in Lili and plays the title role in Vincente Minnelli's sumptuous, Oscar-winning Gigi. So indelible is Caron’s musical footprint, it’s easy to forget what an excellent dramatic actress she can be.

Well, if your memory needs a refresher, check out The L-Shaped Room, a quiet, introspective drama that arguably contains Caron’s finest performance. Brimming with emotion, yet exuding a disarming naturalness that’s both alluring and heartbreaking, her portrayal of a fiercely independent unwed pregnant woman struggling to find her footing while living in a seedy London boarding house won her a Golden Globe award and Best Actress Oscar nomination. (She lost to Anne Bancroft in The Miracle Worker.) Unlike many acting showcases, The L-Shaped Room is a superior film in its own right. Writer-director Bryan Forbes’ insightful, nuanced script (based on a novel by Lynne Reid Banks) explores provocative themes with candor and grace, while the movie’s distinctly European flavor lends the narrative a refreshing edginess that continually propels it forward - and keeps the audience guessing - despite the leisurely pacing. Lovely character beats abound, all of which enhance this slice-of-life tale that, like its resolute heroine, refuses to compromise.

As the film opens, Jane Fosset (Caron), a demure French girl, rents the titular l-shaped room, which sits on the top floor of a dilapidated boarding house in a shabby section of London. The cramped, dingy, somewhat squalid lodging will serve as her personal sanctuary over the next several months as she ponders her future after learning a casual sexual encounter has left her pregnant. Her conservative parents have disowned her, she has no intention of marrying, and following a traumatic visit to an unscrupulous doctor (Emlyn Williams) who all too quickly offers to perform an illegal abortion, Jane becomes more determined than ever to have the baby and raise it on her own.

Yet, she keeps her condition to herself for as long as possible. Toby (Tom Bell), a struggling young writer who lives downstairs, begins to pursue Jane, and over time, a tentative romance develops, much to the chagrin of their mutual friend, Johnny (Brock Peters), a black musician whose apartment is adjacent to hers. All three are floundering loners who crave a connection to quell the uncertainties, fear, frustration, and resentment that consume them. But, when Toby learns Jane's truth, it shakes the delicate balance of their relationship, and his angry reaction causes her to rethink her decision regarding her future and that of her unborn child.

Part of a British film movement known as "kitchen sink realism" that spawned such socially charged movies as Look Back in Anger, Room at the Top, Saturday Night and Sunday Morning, and This Sporting Life, The L-Shaped Room paints a stark portrait of lower-class London life. In addition to the myriad issues surrounding an unwanted pregnancy, the story touches upon other taboo topics like abortion, prostitution, homosexuality, and free love. The various misfits who populate the rooming house where Jane and Toby reside all harbor secrets and have bravely weathered their share of hard knocks. Their struggles have taken a toll, but the chips on their respective shoulders, borne from fear, bad choices, and broken dreams, often belie the empathy they feel for one another. Like a dysfunctional family, they manage to coexist, sharing moments of camaraderie in between fiery spats.

Forbes, whose most notable credits are the equally creepy Seance on a Wet Afternoon and The Stepford Wives, infuses The L-Shaped Room with plenty of European flair, which lends the film an edgy, modern feel. Though not as bold and avant-garde as the period's French New Wave movies, it never shrinks from confronting Jane's unfortunate predicament in a frank manner that must have shocked - at least to a certain degree - the more prudish American audience. Douglas Slocombe's beautiful black-and-white cinematography combines romance with realism to great effect, creating an intimate mood that heightens the story's impact, and the location shooting thrusts us into the gritty, drab atmosphere, which often exudes a pungent Bohemian air. The claustrophobic apartments, diners, and clubs also reflect the feeling of entrapment that consumes all the characters, who deal with it with a mixture of rebellion and resignation.

Bell makes a strong impression as the fiery Toby, filing a layered portrayal that makes us question his motives and behavior. He and Caron create a potent chemistry that's both sexual and romantic, and its underlying intensity explodes nicely when their relationship goes on the rocks. Peters, who so memorably brought accused rapist Tom Robinson to life in To Kill a Mockingbird (his next film after The L-Shaped Room), is equally good, projecting both strength and vulnerability in an all-too-brief role, and the rest of the actors make the most of their fleeting opportunities to shine.

In the end, this is Caron's film, and her luminous presence both brightens and warms every frame. At last liberated from the glamorous makeup, hairstyles, and costumes that defined her exotic look at MGM in the 1950s, Caron appears so unaffected and authentic; she almost makes us forget she ever donned on a pair of ballet slippers. Her intuitive acting lends notes of truth to all her scenes, and it's thrilling to watch her effortlessly juggle raw and nuanced emotions. Every actress deserves one defining performance, and without a doubt, this is Caron's. The L-Shaped Room is a meticulously made, interesting, and absorbing drama, but she is the sparkling jewel in its crown. 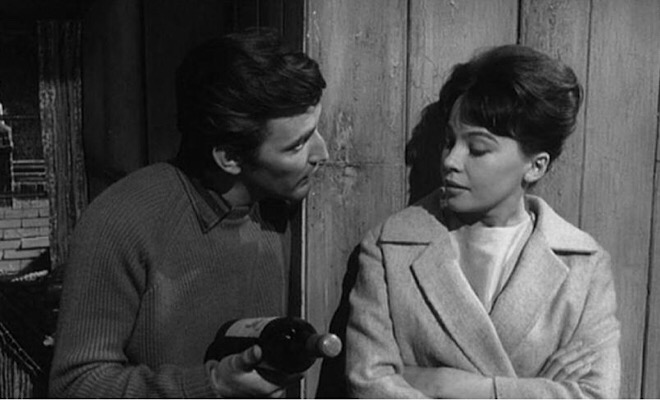 The L-Shaped Room arrives on Blu-ray in a limited to 3,000 edition packaged in a standard case. An eight-page booklet featuring an essay by film historian Julie Kirgo, assorted black-and-white scene stills, and a color reproduction of the movie’s poster art is tucked inside the front cover. Video codec is 1080p/AVC MPEG-4 and audio is DTS-HD Master Audio 1.0. Once the disc is inserted into the player, the static menu without music immediately pops up; no previews or promos precede it.

Cinematographer Douglas Slocombe may be best known to contemporary audiences as the man who shot the first three Indiana Jones movies, but his distinguished career dates all the way back to the early 1940s, and Twilight Time honors his work on The L-Shaped Room with a beautifully lush 1080p/AVC MPEG-4 transfer. Though much of the photography flaunts a stark, natural look that mirrors the harsh reality of Jane’s existence, a warm, romantic glow often bathes the image as well, and this exceptional rendering maximizes the impact of both styles. Rich, deep blacks anchor the picture, nicely varied grays heighten the sense of depth, and a lovely grain structure preserves the film-like feel while supplying necessary texture. Sharp close-ups highlight Caron’s creamy complexion, Bell’s ruggedness, and the careworn faces of various character players, and excellent shadow detail keeps crush at bay. Subtle details like scratches on wood panels, chipped paint, distant rain through a tiny window, and faded wallpaper patterns are wonderfully distinct, and only a couple of errant nicks dot the pristine source material. Superior transfers help draw viewers into intimate dramas, and this one keeps us spellbound throughout.

The DTS-HD Master Audio 1.0 track is surprisingly crisp and full bodied, often projecting more dimension than most mono sound. Subtleties, such as footsteps, distant voices, water in the pipes, typewriter tapping, chirping birds, and a scratchy record on a victrola, come through especially well, adding essential atmosphere to the claustrophobic settings. Marvelous fidelity and tonal depth enhance the jazz club sequence, which is aided by a slight level boost, as well as the elegance of Brahms’ piano concerto, which underscores some of the action. Though all the dialogue is clear and well prioritized, the accents of Caron and her British cast-mates make a few lines difficult to comprehend, but no age-related defects like hiss, pops, or crackles mar the purity of the mix. This unobtrusive but very effective track definitely exceeds expectations and heightens the impact of the delicate narrative.

Audio Commentary - The dynamic trio of Twilight Time film historians - Lem Dobbs, Julie Kirgo, and Nick Redman - sit down for a typically lively commentary that may not rival their best, but is always an interesting listen. Dobbs cites the film’s “haunting quality” and calls it “Kafka-esque,” while Redman feels the deliberate pacing is key to the movie’s success. All three discuss the myriad London locations, the differences between the novel and screen adaptation, the reasons why the careers of writer-director Bryan Forbes and actor Tom Bell  faltered, the state of the British film industry, and the legalities of abortion in Great Britain in the early 1960s. They also quote reviews of the film and talk about Caron’s notorious relationship with Warren Beatty, and Redman shares his personal memories of working for actress Patricia Phoenix. Sometimes the chat strays too far away from The L-Shaped Room, but despite such tangents, this substantive commentary provides welcome context and perspective.

Isolated Music & Effects Track - Both John Barry’s jazz interlude and the excerpts from Brahms’ Concerto No. 1 in D Minor for Piano and Orchestra can be enjoyed without dialogue on this isolated track.

Theatrical Trailer (HD, 3 minutes) - The original preview claims The L-Shaped Room “achieves a realism seldom presented in any contemporary film” and is “one of the most stirring love stories the screen has ever dared tell.”

Leslie Caron’s luminous, Oscar-nominated performance is reason enough to see The L-Shaped Room, but writer-director Bryan Forbes’ touching study of an unwed pregnant woman’s struggle to accept her situation, navigate a burgeoning relationship, and forge a life for herself stands on its own as an artistic, emotionally affecting film. Though supplements are slim, strong video and audio transfers distinguish Twilight Time’s limited edition Blu-ray presentation, which comes highly recommended.