One of cinema's definitive film noirs, Brighton Rock paints a bleak yet riveting portrait of mob life in 1930s England. Director John Boulting's taut, gritty, violent, and artistic adaptation of Graham Greene's acclaimed novel features a breakout performance from a young Richard Attenborough, a literate script by Greene and Terence Rattigan that mixes action, conflict, and substantive themes, and gorgeous cinematography from Harry Waxman. Though a fair amount of print damage tarnishes an otherwise stellar transfer, the story of a vicious teenage thug who tries to maintain his grip on his gang while covering up a cold-blooded murder nevertheless keeps us mesmerized. From the first frame to the last, Brighton Rock is a dazzling tour de force that comes very highly recommended.

Film noir is a French term for an American art form, but England embraced the genre, too. Brighton Rock, a taut, riveting adaptation of Graham Greene's classic crime novel, stands as one of the Brits' finest noir efforts and one of the best overall noirs in cinema history. Like many of its genre cousins, the film's dazzling style captivates the senses and engrossing, fast-paced plot keeps us transfixed, but it's the themes lurking beneath the surface that really set Brighton Rock apart.

Strict censorship codes - especially in America, but also in England - forced most film noirs of the 1940s and '50s to adopt moralistic tones. "Crime doesn't pay" and "lust leads to ruin" are typical noir messages, but Greene muddies those trite waters by injecting the loaded topic of religion into the mix. Issues of faith permeate many Greene novels (Catholicism profoundly influenced the author's life), but it's rare for such a high-minded subject to play such a significant role in a down-and-dirty movie. A striking dichotomy between not just good and evil, but also salvation and damnation results, which elevates the gravity of Brighton Rock and heightens the tension pulsing through it.

After a newspaper exposé leads to the murder of a mob kingpin in the seaside town of Brighton, the gang's new leader, 17-year-old Pinkie Brown (Richard Attenborough), targets - then slays - the reporter who wrote the story. That vicious act spawns a manhunt the paranoid Pinkie tries to quash, but the unexpected meddling of amateur detective Ida Arnold (Hermione Baddeley), a middle-aged pier performer who befriended the reporter at a local pub on the last day of his life, puts a wrench in those plans. The blowzy Ida is hellbent on bringing the killer to justice, and her dogged sleuthing eventually leads her to Rose (Carol Marsh), a teenage waitress in a tea room who unwittingly possesses information that will incriminate Pinkie and his henchmen.

Unfortunately, by the time Ida gets to Rose, Pinkie has already assessed the girl's worth and manipulates her into a romance to gain her loyalty and keep her quiet. Rose, a devout Catholic, worships Pinkie and would rather die than betray him, but he regards her as nothing more than an inconvenience and disposable loose end. As the walls close in, Pinkie resorts to more desperate measures to evade police, all of which lead to a breathtaking, nail-biting climax. 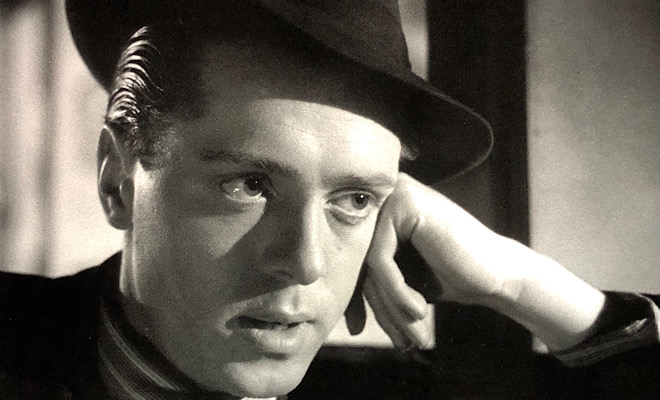 Impeccably directed by John Boulting (who is known more for comedies than thrillers), Brighton Rock sucks us in with its muscular cinematic style, then knocks us out with its resonating substance. The early chase scene through Brighton's streets and alleys that leads to a suspenseful game of cat-and-mouse on the town's bustling, festive pier rivals the best of Hitchcock...and just might have provided some inspiration for his famous carnival scene in Strangers on a Train. The sequence climaxes with a spectacularly shot, semi-subjective indoor roller coaster ride that's so deliciously creepy it just might haunt your future trips to Disneyland.

Extensive location shooting, artistic high and low angle shots, extreme close-ups, jump cuts, lengthy tracking shots, and atmospheric nocturnal scenes keep the eye constantly engaged, while the literate script by Greene and acclaimed British playwright Terence Rattigan (Separate Tables) stimulates the brain. Boulting juxtaposes the lyrical dialogue and religious undertones against a barrage of brutal images to create a highly sophisticated film noir that genre connoisseurs will especially appreciate. He even salutes the classic Warner gangster flicks of the early 1930s by using images from the movie to introduce the actors and identify the characters they play during the opening credit sequence. 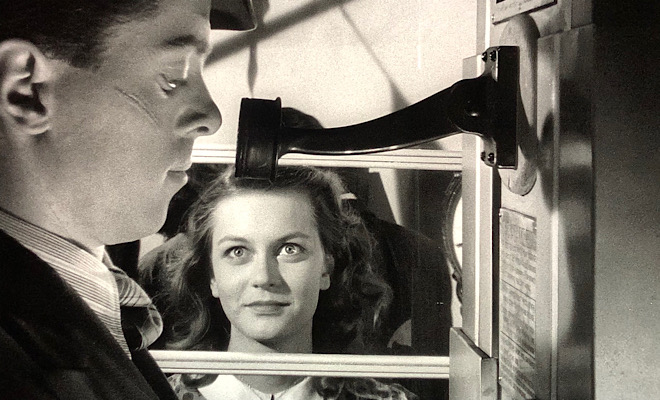 Despicable villains are a noir staple, but they're usually supporting characters or femme fatales who conspire to bring down the flawed yet likable hero. In a twist, Brighton Rock's central character is a rotten-to-the-core thug who gains our fascination but not our affection. Throughout the film, we keep waiting for Pinkie to exhibit some fleeting tenderness or compassion that might endear him to us or provide some measure of redemption, but Greene and Rattigan continually dash those hopes.

As does Attenborough in an uncompromising, magnetic performance. A far cry from the benevolent and eccentric John Hammond in Jurassic Park, the role of Pinkie made the 24-year-old actor a star. His ice-cold demeanor, brooding glares, and sporadic outbursts lace his work with a fierce intensity that would also serve him well 25 years later in his portrayal of notorious British serial killer John Christie in the chilling 10 Rillington Place. In addition, he creates a fascinating sadomasochistic rapport with the utterly unpretentious Marsh, who would play Ebenezer Scrooge's doomed sister Fan in the Alastair Sim version of A Christmas Carol a few years later. Marsh makes her film debut in Brighton Rock and brings a few rays of light to a dark, downbeat film.

When most movie fans put Greene together with film noir, The Third Man quickly springs to mind - and well it should - but no one should ever dub Brighton Rock the forgotten stepsister. Thanks to this release from Kino, this terrific, often mesmerizing noir once again receives the accolades and recognition it so richly deserves. 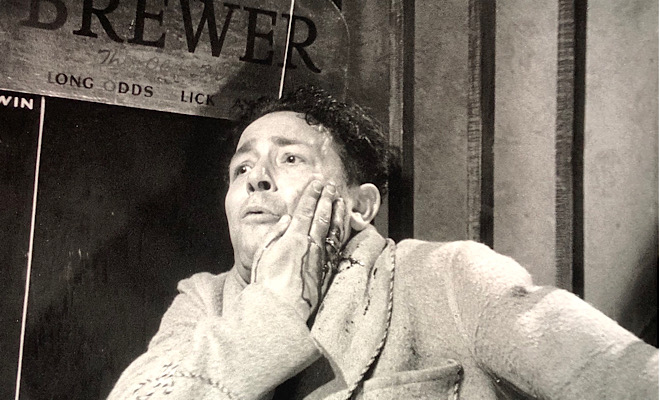 Brighton Rock arrives on Blu-ray packaged in a standard case. Video codec is 1080p/AVC MPEG-4 and audio is DTS-HD Master Audio mono. Once the disc is inserted into the player, the staticmenu with music immediately pops up; no previews or promos precede it.

Oh, how I wish this film could have undergone a complete restoration before its Blu-ray release! Beautifully shot by cinematographer Harry Waxman, Brighton Rock screams film noir with its shadowy photography, dingy settings, striking close-ups, and interesting camera angles. Kino honors the movie's artistry with a 1080p/AVC MPEG-4 transfer that earns high marks in a number of departments...except one. Sadly, the source material just isn't up to snuff. The print, which might have been the best available, is littered with scratches, specks, vertical lines, and any number of other imperfections that diminish the impact of the often dramatic visuals. (A bit of image instability also crops up here and there.) The wear-and-tear ebbs and flows, but few scenes can really be called clean.

The damage is doubly disappointing because otherwise this is quite a good transfer. Wonderful clarity and contrast, inky black levels, nicely varied grays, and excellent shadow delineation distinguish it. A natural grain structure maintains the feel of celluloid while supplying just enough texture to complement the gritty narrative. Close-ups, several of which are extreme, are razor sharp. They showcase Attenborough's smooth baby face and wispy eyebrows, Baddeley's thick make-up and skin folds, the scars and wounds on the gangsters' faces, the fresh complexion of Carol Marsh, and the ghoulish images in the amusement park ride. Costume fabrics come through well, patterns are well defined and rock solid, and background details are easy to discern. Some scenes look a bit softer and more faded than others, but thankfully those are few and far between.

Because the narrative is so engrossing and the presentation so inventive, it's possible to become numb to some of the print issues over time. Still, while watching Brighton Rock, it's impossible not to rue the beat-up print and envision how dazzling the film would look after receiving a much-needed makeover. Hopefully, someday this classic will receive the royal treatment it deserves.

The DTS-HD Master Audio mono track pumps out clear, well-modulated sound and boasts an impressive level of fidelity. The film's locations provide essential atmosphere, and this track immerses us in the lively activity of the seaside town - its busy streets, bars and restaurants, and bustling pier. A wide dynamic scale allows the robust music score by Hans May plenty of room to breathe, sonic accents are crisp and distinct, and no distortion creeps into the mix. Some of the dialogue is a bit difficult to comprehend, but that's more due to the accents and fast delivery than any technical problems. Best of all, no age-related hiss, pops, or crackle intrude.

Though a few trailers are included on the disc, there's not one for Brighton Rock, which is a shame. What we do get, though, is a very fine audio commentary from film historian Tim Lucas, who covers a lot of topics over the course of his comprehensive discussion. In addition to analyzing the story's themes, providing various cast and crew bios, and chronicling the movie's production, Lucas cites the differences between Graham Greene's novel and its screen adaptation, quotes passages from both Greene's novel and autobiography, discusses the censorship issues the picture faced, identifies various locations (thanks to a computer program), and compares elements of Brighton Rock to its 2005 remake. If you've got the time, you'll find this commentary illuminating, informative, and interesting.

Brighton Rock isn't just one of the best film noirs to come out of Great Britain, it's one of the best film noirs period. This taut, gritty, violent, and artistic adaptation of Graham Greene's acclaimed novel combines an engrossing story with substantive themes and an array of stunning images to produce a dazzling and memorable motion picture. A young Richard Attenborough makes a huge splash as a rotten-to-the-core teenage mobster who struggles to cover up a murder and keep a rival gang at bay, all while manipulating a naive girl who unwittingly holds his fate in her hands. A fair amount of print damage sullies an otherwise stellar transfer, but can't dull the impact of the top-notch performances, literate script, outstanding direction, and gorgeous cinematography that distinguish the film. More than 70 years after its initial release, Brighton Rock remains a riveting movie and one of cinema's definitive film noirs, and it comes very Highly Recommended.