One Cut of the Dead (SteelBook)

Shin'ichirô Ueda's One Cut of the Dead deftly turns to the often tried and true zombie movie to punch a horror-comedy. Unlike so many others to try - this one works! A movie three distinct acts, just when you think the film is a one-joke show, it pulls the rug out for some true gut-busting hilarity. With a cast of unknowns and made on the smallest of budgets, this movie delivers big entertainment. RLJ Entertainment delivers One Cut of the Dead to Blu-ray in a two-disc SteelBook set sporting solid video - intentionally stylized - with effective Japanese and English audio. This was a lot more fun than I thought it was going to be - Highly Recommended.

Director Takayuki Higurashi (Takayuki Hamatsu) has gone full Kubrick in order to make his low budget zombie movie. Berating and screaming at his lead actress Aika (Yuzuki Akiyama) to improve her performance through 40+ takes of the same shot, Takayuki's production is on the verge of collapse. According to rumor, their set location used to be an old WWII facility with a dark history. Well, that history becomes a problem when actual zombies appear and invade the shoot - and Takayuki is ready to capture the real terror on the faces of his cast and crew! 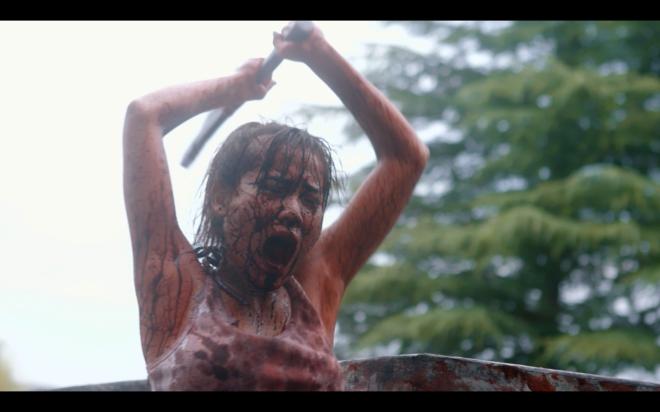 If only that was all One Cut of the Dead has going for it. There's a lot more going on here. As a film with three distinct acts, that summary above represents the first 37-ish minutes (shot in one impressive take). I went into this movie cold as could be. I heard about it when it hit theaters in Japan and was making waves in the market throughout 2017. A movie shot for about $25,000 -- using essentially the money paid by the actors for an acting class -- that was making millions at the international box office is hard not to notice! I desperately wanted to see it in theaters but missed my window of opportunity as it didn't get a wide release here stateside. Thanks to Shudder and RLJ Entertainment everyone can enjoy it!

Watching less than 20-seconds of the trailer I went in knowing nothing of the movie and that really is the best way to go. At first, I was enjoying it. It had energy, I was jiving on the single take premise, and it was fun. But it also started to feel like a one-joke show. It was humorous, but I wasn't "laughing out loud." Then the twists came. And they are a bit jarring, but they pay off. The middle can feel a tad sluggish, but by the end, you're laughing and cheering for this film.

One Cut of the Dead threw me back into the nostalgic feels of go-for-broke filmmaking when I was a student. I helped write, edit, crewed - and even unfortunately acted in - several student productions that outpaced the abilities of those involved. Ambition can be a powerful driving force, but it can also bite you in the ass. An acquaintance maxed out half a dozen credit cards to get a similar amount of funds as this film to produce his first feature… and it imploded. When half the cast has to leave the city because the spring semester is over and they don't have a place to live or jobs, you got yourself a production nightmare.

This movie has that do-it-yourself burn all the energy you got gumption going for it and it works. I'm going to wrap things up here because there's not a lot more about it I can say but to just go see the damn thing already! It's the best kind of movie like Ed Wood or My Name Is Dolemite where you just feel inspired to go out and make your own movie or complete that work of art or put the final period in that novel you've neglected since National Novel Writing Month from four years ago. Watch this movie - then go do that creative thing you've always wanted to do.

RLJ Entertainment delivers One Cut of the Dead to Blu-ray in a two-disc Blu-ray + DVD set. Housed in SteelBook packaging, each disc gets its own cradle to rest in without being stacked. Pressed on a Region A BD-50 disc, the disc loads to a brief preview for Shudder before arriving at an animated main menu with traditional navigation options.

Framed in 1.78:1 - One Cut of the Dead has a purposefully deceptive video presentation. Don't worry about the first 38 minutes of the movie - it's supposed to look that way. As is the rest of the movie. I'm sorry for being oddly vague here during the technical portion of the Blu-ray but it's actually a plot giveaway that I don't want to break if I can help it - beyond saying this is truly how the movie is supposed to look as you watch it and the story unfolds. To that end - in the course of respective scenes - One Cut of the Dead looks great. Bold colors, decent details, nice black levels to give the movie a welcome sense of depth and dimension. While this isn't always necessarily true for the first act - it applies to the rest of the movie. The first act is probably a step or two better than what you saw for 28 Days Later on Blu-ray. But it's supposed to look like that so all of the video noise, white level imbalances, crushed blacks - it's there for a reason.

The audio for One Cut of the Dead is another story. It's actually genuinely uniform throughout and sounds great. You get the pick of a true Japanese DTS-HD MA 2.0 mix with English Subtitles or an English dubbed DTS-HD MA 2.0 track. Obviously the Japanese track is the best presentation as the mix of dialog with the sound effects and scoring blend the best. However, I actually have to tip my hat to the English dubbed in that it's not half bad. The translations are a tad off compared to the subtitles but the voice actors actually fit their respective actors. To that end, atmospherics for both tracks are appreciable - the opening location offers up welcome interior and exterior dynamics as the camera moves indoors and out. Imaging - even through the front/center fixtures - provides trackable sound effects. I felt popping on the DTS: NeuralX function opened up the mix even more - but if you don't have that feature you're fine with this being a stereo affair.

If there's an area where I wish this release had done better was with the bonus features. The best of the pack is absolutely the GoPro Version of One Cut of the Dead as you get to take an insider in-the-action look at the making of the unbroken opening take. It's pretty wild to see how efficiently they pulled it off! Everything else feels like filler by comparison.

After only hearing about the smallest of details I was eager to experience One Cut of the Dead - and it wasn't at all what I was expecting. It's so much better. It's literally a do-it-yourself movie made without all the trimmings of a major studio and it wins the day leading to some big laughs with a lot of heart - and plenty of gore to go around! I loved this movie. I love horror comedies and Zombies feel like easy shots. But so few movies do it right. I put One Cut of the Dead alongside Return of the Living Dead and Shaun of the Dead as not only great zombie-focused horror/comedies - but just great entertaining movies that I'll be more than willing to watch over and over again. RLJ Entertainment gives One Cut of the Dead the Blu-ray release it deserves with an excellent A/V presentation and cool SteelBook packaging. I wish more bonus features were available but I'm willing to overlook that as the movie is just so much fun. Highly Recommended.