Hot off the success of Airplane! - Jim Abrahams, David Zucker, and Jerry Zucker gave the one-time dramatic actor Leslie Nielsen another shot to show his comedic chops in Police Squad - a gut-bustlingly hilarious sendup of classic police dramas. Better known for the trilogy of films it spawned, this ill-fated series only made it six episodes but each one is classic madcap comedy. Paramount upgrades the series to Blu-ray with great results offering a fresh A/V presentation and the bonus features from the original DVD release. Highly Recommended.

"Watch carefully as I test fire this gun into these videotapes of Barbara Walters interviews."

It's been a hell of a week and I needed a laugh. Truthfully I hadn't intended to review Police Squad: The Complete Series - we never got a screener here at HDD and it was released several weeks ago. But between news, a sleepless infant, and all other things going on - I needed a laugh. As I finally got to picking through this new Blu-ray release of one of my favorite shows, I got to figure a bunch of other folks out there could use a giggle or two. In true Abrahams & Zucker Brothers style this short-lived show delivers! If you're down or just exhausted with what's going on - Police Squad is the perfect break in your day.

All six episodes run for a little over two-and-a-half hours combined and there's never a dull moment. It's a gag a second. If the late great Leslie Nielsen isn't delivering another deadpan joke there's a visual gag looming in the background. Every episode has so much packed into such a small amount of time that it demands multiple upon multiple viewings just to catch everything. I've been watching this show ever since I taped the full run off TVLand as a kid and I'm still spotting new jokes I've never noticed. It's great when a show can make you laugh 20 years later, but if you're still finding new gags you're working with a genuine classic comedy. 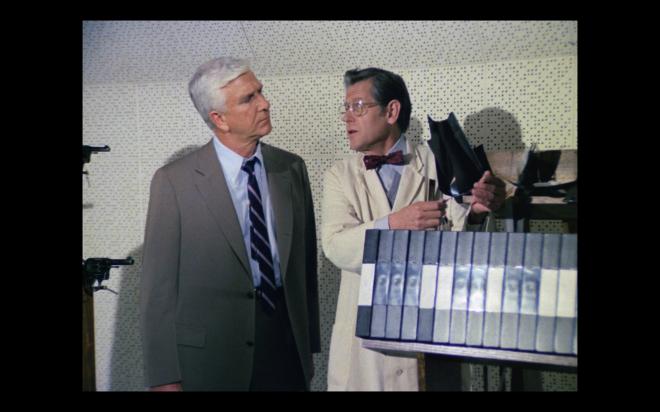 Like most folks out there I discovered the exploits of Nielsen's Detective Frank Drebin thanks to The Naked Gun: From the Files of Police Squad! - that name in of itself is a joke from this series. Right after the credit of Rex Hamilton as Abraham Lincoln, the credits conclude with a "special guest star" who is murdered before the credits roll followed the narrator saying the title of the episode - which is never the same as what's printed on screen. It's a constant gag that always makes me laugh. I imagine they wanted to keep that gag alive for the sequel titles but had to settle for fractions or risk losing the audience.

If you've seen the Naked Gun Trilogy you know well what to expect from this show - pretty much the exact same level of humor only a titch different with some notable casting changes. While I would have loved to see Alan North continue on as Ed in the movies - the studio demanded a more prestigious actor in one of the main roles, thus we have George Kennedy. Another big change was Peter Lupus of Mission: Impossible fame being traded in for the then charming and endearing O.J. Simpson. Lupus is funny as hell in a sort of narrow-minded dope where Simpson played it full-out buffoon. 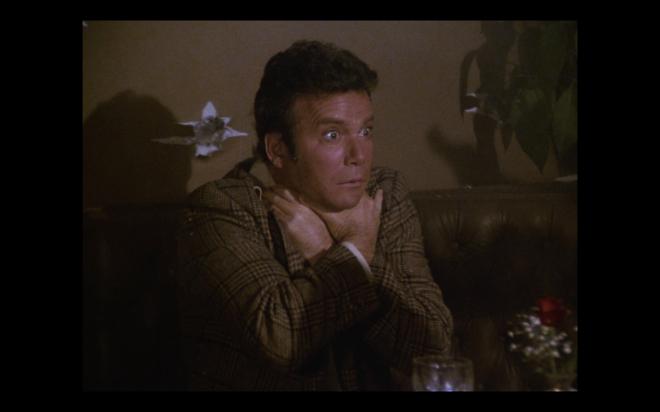 While I'm bummed there are only six episodes to enjoy - I'm glad we have them! If this show hadn't become a cult hit who knows if we'd have the movies. As I said before I love this series, every episode offers something hilarious and keeps stacking up the gags so quickly you can't keep up. So much funny stuff flies at you so fast you're always laughing - right up to the fake freeze-frame endings.

Police Squad!: The Complete Series arrives on Blu-ray thanks to Paramount Pictures in a single disc set. Pressed on a BD-50 disc, the disc is housed in an eco-friendly case. The disc loads to an animated main menu with traditional navigation options.

While the 1.33:1 1080p transfers for each episode appear to be sourced from the same masters as the DVD series released several years ago - this Blu-ray presentation is the clear winner. As I mentioned in the review there are so many background visual jokes that with lower resolutions you just miss the gag or it takes longer to register. Here, everything is crystal clear and makes rewatching each episode that much more entertaining. Fine film grain is apparent throughout giving the image a nice film-like veneer even though it was produced for television. Colors are well saturated allowing for some late 70s golden tones to seep in while primaries make a nice splash. Each episode is in pretty good shape, there is some occasional speckling or some slight staining that comes and goes for a brief second or two, but that's the worst of the age-related damage. It's honestly a shame the movies don't look quite this good on Blu-ray.

Every episode of Police Squad! is packed with an effective DTS-HD MA 2.0 mix. These aren't the most dynamic mixes to ever reach your screen but for this show that was much more focused on line delivery and sound effects that worked to heighten a joke - it works. Dialog is clean and clear throughout. Scoring hits that goofy police drama timbre gunning for a fake sense of drama or suspense when what you're actually seeing on screen is a joke. All in all each mix works perfectly and is clean without any hiss or age-related issues.

The only bummer for this set is no new bonus features. Everything here is ported over from the original DVD set and they're all pretty good. The best of the bunch are the episode commentaries but the other behind the scenes stuff is a fun look at the making of the show.

It's weird often stressful times these days - laughter is more important than ever. Police Squad! and just about every comedic venture the Zucker Brothers and Jim Abrahams undertook never fail to make me laugh. This series is a comedy goldmine filled with amazing jokes and sight gags that never get old. If it's not a rerun of Who's on First it's Shatner milking his death cameo for all its worth. If you thought The Naked Gun Trilogy was everything - you haven't seen it all. Treat yourself, this is guaranteed laughter material.

Paramount Pictures upgrades Police Squad!: The Complete Series to Blu-ray with a video and audio presentation that easily sets aside the old DVD. Complete with the archival bonus features, this classic show demands space on your shelf right next to its cinematic offspring. If you need a laugh - Police Squad! is Highly Recommended.