Love Among the Ruins

An utter delight from beginning to end, Love Among the Ruins is a sparkling showcase for the incomparable talents of Katharine Hepburn and Laurence Olivier in their only screen appearance together. George Cukor directs this light, saucy romantic comedy with his usual flair, and a clever script by James Costigan adds sophistication and wit. A new 2K master distinguishes Kino's Blu-ray presentation, which also features strong audio and an absorbing commentary. Just like its stars, Love Among the Ruins is ageless and the perfect bit of escapism for these difficult times. Highly Recommended.

Some things are worth the wait. And, boy, did we have to wait a long time for icons Katharine Hepburn and Laurence Olivier to share the screen. Both had appeared in films for more than 40 years before finally co-starring for the first and only time in Love Among the Ruins, a tailor-made romantic comedy that showcases their peerless talents to the hilt. Directed with a light touch by the incomparable George Cukor and scripted with flair by James Costigan, this scrumptious made-for-television movie is rich in period flavor, chock full of rapier wit, and awash in sophisticated charm. It's also as fresh as the proverbial daisy 45 years after it originally aired.

Star vehicles - films made for no other reason than to celebrate a performer's distinct personality - aren't really a thing anymore, but they still existed back in the 1970s, and Love Among the Ruins stands as a prime example of the form. Though the delightful narrative and sparkling dialogue certainly enhance the movie's appeal, all we really care about is watching two of the greatest actors of the 20th century strut their stuff. Who cares if they're in their late 60s and look even older? Hepburn and Olivier are ageless, and their talent, appeal, and the magic they so effortlessly create are timeless.

The simple plot revolves around a breach-of-promise trial in early 20th century London...but there's a twist. Instead of a vindictive woman suing the heartless fiancé who ditched her, an opportunistic young rogue accuses his much (much) older female lover, wealthy widow Jessica Medlicott (Hepburn), of jilting him after accepting his proposal of marriage. He wants hefty monetary compensation; she wants to clear her tarnished reputation. 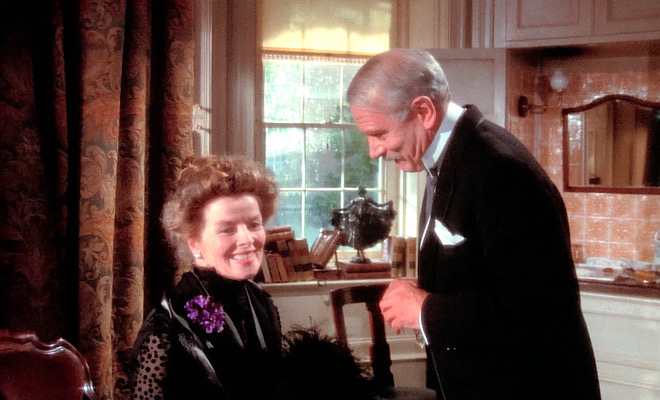 The flamboyant, flirty Jessica, who was once an acclaimed stage actress, enlists noted barrister Sir Arthur Glanville-Jones (Olivier) to defend her against the impertinent charges. Like a hyper schoolboy, he's excited to take her case, not because of her renown, but because 40 years ago he shared three days of heady, passionate romance with Jessica that forever changed his life. Their brief affair so intensely affected him, Sir Arthur hasn't looked at another woman since. So just imagine his crestfallen, dumbfounded, utterly perplexed reaction when his much anticipated reunion with the love of his life yields a devastating truth: Jessica has absolutely no recollection of their steamy liaison and, worse still, doesn't even remember meeting Sir Arthur at all.

What follows is a battle of wills, a battle of wits, and a supreme battle of the sexes as Sir Arthur tries to defend his headstrong client, understand her mercurial personality, come to terms with her uncomfortable legal situation, and most importantly, jog her clouded memory regarding him. It's a tall order and it drives him quite literally to distraction.

Love Among the Ruins is one of those delightful, frothy confections that captivates from beginning to end. There's no underlying message, no substantive themes, nothing to rattle the nerves or spark a post-viewing debate. The film is just good old-fashioned entertainment that's fueled by a literate script that doesn't take itself too seriously, fluid direction, and the mesmerizing magnetism of two legendary stars. 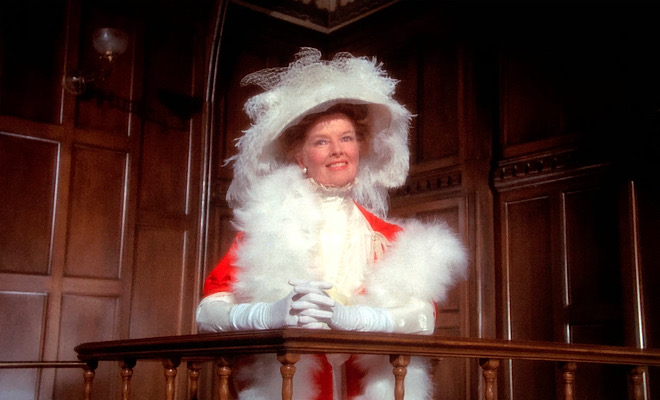 Cukor had previously helmed eight Hepburn pictures, including such classics as Little Women, Holiday, The Philadelphia Story, Adam's Rib, and Pat and Mike. Their mutual respect seems to bring out the best in both of them. Hepburn always appears more relaxed, uninhibited, and unaffected when collaborating with Cukor, and her work here reflects all those qualities. Cukor grants her free rein to explore and indulge her over-the-top character, but Hepburn doesn't abuse the privilege. It would be easy to make a mockery of Jessica, but Hepburn plays her straight, and ironically she's much the funnier as a result.

Olivier, as always, is a marvel, yet there's nothing studied or stodgy about his portrayal. He's bubbly and agile, often exhibiting the same excitement, puppy dog eagerness, and lovelorn melancholy of the smitten young man who first laid eyes on Jessica a lifetime ago. Together, he and Hepburn are a bit like oil and water, but somehow they do mix, and the sublime combination fuels the movie's engine. It's just a shame this geriatric rom-com stands as the only pairing of Hepburn and Olivier...but better late than never!

Love Among the Ruins won six Emmys in 1975, including Outstanding Lead Actor and Actress in a Special Program, Outstanding Directing and Writing, and Outstanding Art Direction and Costume Design. Those accolades hold up today. Having never before seen this lauded TV movie (which doesn't feel like a TV movie at all), I was concerned it might be pompous and stuffy. On the contrary, Love Among the Ruins is like a breath of fresh air. It's perfect lightweight viewing for a quarantined evening and guaranteed to at least fleetingly lift your spirits. 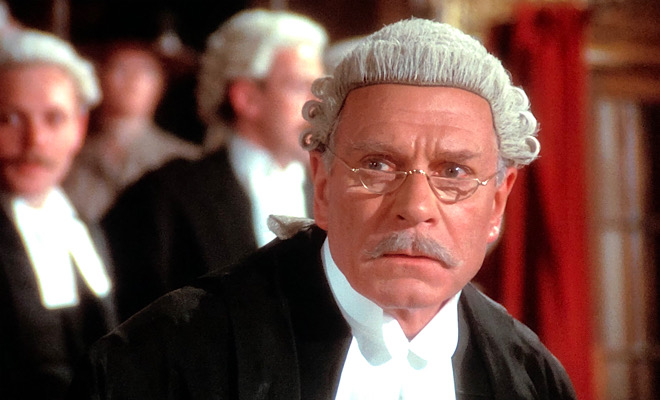 Love Among the Ruins arrives on Blu-ray packaged in a standard case. Video codec is 1080p/AVC MPEG-4 and audio is DTS-HD Master Audio 1.0. Though the movie premiered on television in a standard (for that time) 1.33:1 aspect ratio, director George Cukor shot a wider canvas (possibly with the intention of releasing the film overseas), which has enabled Kino to present the film here in a 1.66:1 aspect ratio. Once the disc is inserted into the player, the static menu with music immediately pops up; no previews or promos precede it.

A brand new 2K master perks up the visuals and brings Love Among the Ruins to life like never before. Kino's 1080p/AVC MPEG-4 transfer honors the beautiful cinematography of three-time Oscar nominee Douglas Slocombe, who previously worked with Hepburn on The Lion in Winter and photographed the first three Indiana Jones movies. Few television movies look more like big screen productions than Love Among the Ruins, which exhibits just enough grain to exude a lovely film-like feel. Clarity and contrast are quite good, and colors - especially the dazzling red of Hepburn's outrageous courtroom gown - provide some potent pop. The blacks of courtroom robes and gentlemen's jackets are lush and deep, while the whites of Hepburn's voluminous feathers are bright, well defined, and resist blooming. Flesh tones appear natural and stable throughout, costume textures are distinct, and background details are easy to discern. Though Hepburn's close-ups are purposely diffused to flatter the 68-year-old actress, other tight shots are crisp and render fine facial features well. A clean source print also heightens the impact of this elegant presentation, which reflects the material's old-school glamour and sophistication.

The DTS-HD Master Audio mono track supplies clear, well-modulated sound. Love Among the Ruins is a dialogue-driven film, and all the witty repartee is easy to comprehend. Atmospherics like rain are distinct, and the memorable music score by John Barry fills the rooms with ease. A wide dynamic scale embraces all the highs and lows while keeping distortion at bay, and no hiss, pops, or crackle intrude.

Aside from a few trailers for other Hepburn and Olivier films available on Blu-ray from Kino, the only extra is an audio commentary by film historian Stephen Vagg. Well researched, informative, a tad salacious, and presented in an affable, easygoing manner, the discussion chronicles the production history of Love Among the Ruins, the prior connections between Hepburn, Olivier, and Cukor, and the television landscape at the time of the movie's broadcast. Vagg also provides historical background on breach-of-promise cases, reveals Cukor had to convince Olivier to participate in the project, and draws parallels between Hepburn's relationship with Spencer Tracy and Olivier's marriage to Vivien Leigh. I initially questioned whether Vagg could sustain a monologue about Love Among the Ruins for the film's entire running time, and he almost manages to complete the challenge. He runs out of steam at the 92-minute mark, but nevertheless contributes an absorbing and informative track that fans of this production will certainly enjoy.

To quote Cole Porter, Love Among the Ruins is delightful, delicious, and de-lovely. Director George Cukor's highly lauded made-for-television movie stands the test of time, thanks to the captivating performances of icons Katharine Hepburn and Laurence Olivier and a sparkling script by James Costigan. A geriatric romantic comedy with a touch of mystery and a charming twist, Love Among the Ruins is both sweet and a little naughty, and contains several laugh-out-loud moments. A new 2K master distinguishes Kino's Blu-ray presentation, which also features strong audio and an absorbing commentary track. During this difficult time, Love Among the Ruins is perfect escapist fare, and it comes highly recommended.