A charming 1930s comedy with warmth, wit, and just enough bite to make it memorable, Holiday remains a wonderful showcase for the timeless talents of Katharine Hepburn and Cary Grant. Director George Cukor's adaptation of Philip Barry's play about a dysfunctional uber-rich family and the common man who rocks their rigid, pretentious world skewers the wealthy while championing those who pursue their passions and live life on their own terms. Criterion's new restoration features excellent video and audio transfers, a previous version of the film, and a few other fine supplements, all of which bolster the appeal of this underrated, often forgotten film. Highly Recommended.

Lump together Katharine Hepburn, Cary Grant, director George Cukor, and playwright Philip Barry and the classic 1940 comedy The Philadelphia Story quickly springs to mind. Yet that memorable film was actually a reunion for the talented quartet, who first collaborated a couple of years earlier on the 1938 screen adaptation of Barry's Broadway hit Holiday. While it may lack the sparkle and polish of its more famous and lustrous successor, Holiday's status as The Philadelphia Story's forgotten stepchild is unwarranted. This witty, insightful, and wonderfully entertaining rom-com that lampoons the über-wealthy's pompous pretensions stands on its own as a solid Golden Age production and still brandishes some sharp incisors more than 80 years after its premiere.

A traditional "drawing room" comedy featuring upper-class characters dropping droll bon mots as they casually converse on sumptuous, ornate sets, Holiday follows the Nöel Coward blueprint as it chronicles the effects of a whirlwind romance on one of New York City's richest, most esteemed families. Johnny Case (Grant) is a self-made man who's worked hard to rise above his modest roots and find his place in the world. On a Lake Placid ski vacaction he meets socialite Julia Seton (Doris Nolan), and 10 days later they become engaged. Unbeknownst to Johnny, though, Julia lives in an opulent Big Apple mansion with her gruff, controlling father (Henry Kolker), perennially drunken, browbeaten brother (Lew Ayres), and down-to-earth, restless, "black sheep" sister Linda (Hepburn), who's dabbled in various careers in a feeble attempt to escape the insufferable oppression she feels as a member of New York's hoity-toity elite.

Johnny is bowled over but not particularly impressed by Julia's massive wealth. His lack of pretense, easygoing demeanor, and happy-go-lucky approach to life often rankle his more rigid bride-to-be, who revels in her wealthy trappings and fits snugly into the snooty Manhattan milieu. On the cusp of making his own fortune, Johnny looks forward to quitting his job at a top financial firm and taking an extended "holiday" to explore the world and all that life has to offer while he's still young enough to enjoy and appreciate it. Linda finds his devil-may-care attitude refreshing and admirable, but it's anathema to Julia's father, who believes making money is man's only worthwhile pursuit. A tug-of-war ensues, as Julia and her dad try to squeeze a reluctant Johnny into a stifling mold. Yet the more they pull, the more they push Johnny into the sympathetic arms of Linda, who must suppress her growing attraction to her sister's fiancé. 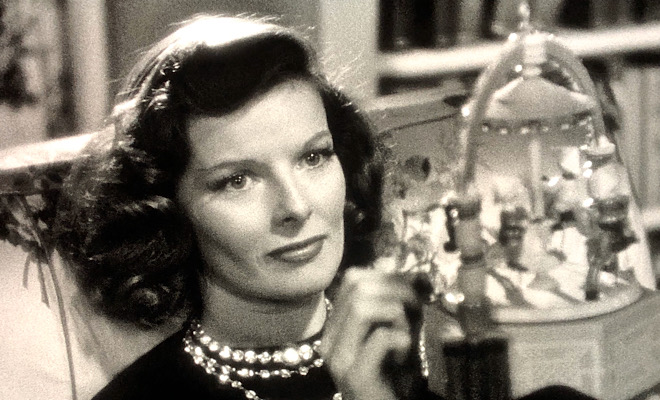 Barry wrote Holiday in 1928, just a year before the Great Depression rocked the American economy. Back then, making fun of the idle rich was an amusing pastime, but by 1938, financially strapped audiences resented hearing wealthy characters whine about their put-upon lives and dream of a simpler existence without the pressures money brings to bear. As a result, Holiday never really caught on with the public. Today, though, the issues of class conflict, social integration, and marching to the tune of a different drummer seem more relatable, and the screenplay by Donald Ogden Stewart (The Philadelphia Story, An Affair to Remember) and Sidney Buchman (Mr. Smith Goes to Washington, Cleopatra) finely mixes pointed quips and clever repartee with serious musings and honest emotion. There's a lot more substance in Holiday than most 1930s comedies, and though some of its speeches sound overly eloquent and a tad preachy, its themes strike a chord.

Holiday depicts the upper class as a motley collection of stodgy, imperious, judgmental stiffs who hide in their cavernous mansions, are driven by greed, and fear stepping outside the boundaries of their rarefied cliques. Julia feels comfortable wrapped in such an insular cocoon, but all the implacable mores and protocols threaten to choke Linda, who longs for liberation, even if it means revoking her heritage and relinquishing her claim to her family's fortune. To Julia, Johnny is a wild animal who needs to be tamed and trained, but to Linda, he represents excitement, escape, and most importantly, oxygen for her asphyxiated soul.

Hepburn may overact at times, but she beautifully embodies Linda's yearning. Likewise, little-known Doris Nolan files an incisive portrayal as the more reserved, practical Julia. Grant is the perfect buffer, and his affable demeanor masks the turmoil churning within the torn Johnny, who wishes to please Julia and her father while remaining true to himself. Caught in the middle of an unexpected triangle, Grant believably projects feelings for both women, along with an infectious sense of rebellious fun. Lew Ayres also impresses as the ever-inebriated Ned, whose perpetual tipsiness relaxes his tongue and allows him to make the film's most pointed and honest observations. 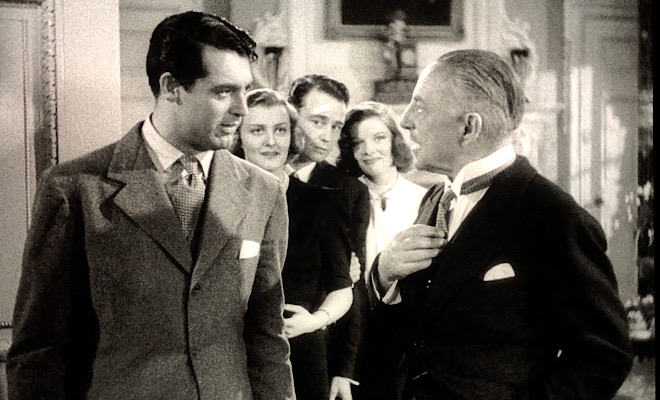 Because of Hepburn's legendary partnership on screen and off with Spencer Tracy, it's easy to forget she and Grant also made a dynamite duo, starring in four films together over a five-year period from 1935-1940. After a bumpy start in the fascinating failure Sylvia Scarlett, Cary and Kate headlined the classic screwball romp Bringing Up Baby, then went straight into Holiday, after which Hepburn would return to Broadway to appear in The Philadelphia Story, a savvy move that would allow her to reinvent herself when she returned to Hollywood to star in the film version with Grant in 1940. There's something intoxicating about the prim, headstrong, New England Hepburn mixing it up with the garrulous, fun-loving, Cockney Grant. Like Tracy, Grant doesn't tolerate Hepburn's airs and seems to relish knocking her off her pedestal, while she seems to enjoy letting her hair down and not taking herself so seriously.

Holiday would also mark the fourth time Cukor directed Hepburn (they would make a total of 10 films together between 1932 and 1979) and the first of four scripts written for the actress by Donald Ogden Stewart. Both men grasp the Hepburn persona better than most, and as a result, show her off to her best advantage. Though Hepburn would take a two-year Hollywood hiatus after shooting Holiday, the movie stands as a bridge between her formative years at RKO and the maturity she would soon exhibit at MGM, where she would meet and co-star with Tracy.

Holiday is a comedy of manners with serious undertones that revels in the misbehavior of its repressed characters. It's little more than a trifle, but makes some cogent points about wealth, society, and personal growth that are worth heeding even if they aren't particularly fresh. In the end, it's the vibrant performances and literate script that keep this delightful antique relevant and entertaining. And with most of the movie transpiring on New Year's Eve, it's a fitting film for the dawn of a new decade and the promise we all hope it holds. 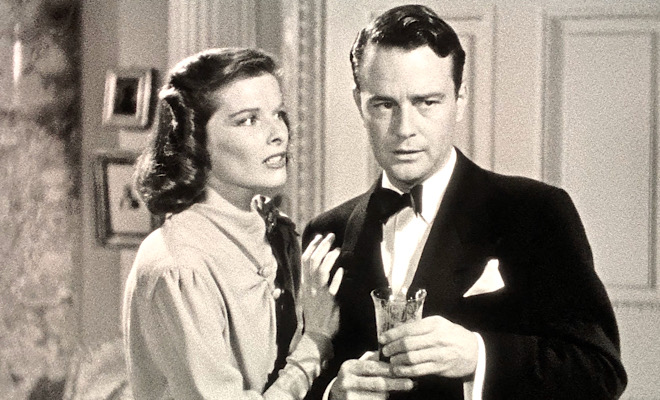 Holiday arrives on Blu-ray packaged in a standard Criterion case. A 10-page fold-out booklet featuring an essay by film critic Dana Stevens, two photos, a cast and crew listing, and transfer notes is tucked inside the front cover. Video codec is 1080p/AVC MPEG-4 and audio is LPCM mono. Once the disc is inserted into the player, the static menu with music immediately pops up; no previews or promos precede it.

A new 4K restoration yields a vibrant 1080p/AVC MPEG-4 transfer that breathes new life into this Golden Age antique. The liner notes credit a 35 mm nitrate duplicate negative and 35 mm nitrate print as the sources for the digital rendering, which exhibits no nicks, dirt, or scratches. Contrast and clarity are quite good, deep black levels lend the image necessary weight, and a nicely varied gray scale enhances depth and punches up the fine details of the ornate interiors. (The art direction by Stephen Goodson and Lionel Banks garnered the film's only Academy Award nomination.) The heightened resolution does amplify the impact of film grain, which can appear a tad heavy at times. The texture, though, never diffuses the picture. Close-ups, especially those of Hepburn, look lush and glamorous, while patterns and costume fabrics appear bold and life-like. Though this transfer lacks the silky smoothness of some classic movie renderings, it's still an excellent effort, and Holiday has never looked better than it does here.

According to the liner notes, "the monaural soundtrack was remastered from the original optical soundtrack negative," and the resulting LPCM transfer provides clear, well-modulated sound. There's not a lot of music in Holiday (the film's composer, Sidney Cutner, does not even receive screen credit), but when orchestrations kick in, they sound robust and full-bodied. All the dialogue is clear and easy to comprehend, and no pops or crackle intrude. A faint bit of age-related hiss is occasionally audible, but it never distracts from the action on screen.

A perfect New Year's film that reminds us to stay true to ourselves and follow our dreams despite any disapproval or self-doubts, Holiday remains a delightful mix of social satire and infectious romance. Katharine Hepburn and Cary Grant light up the screen in this underrated, substantive comedy that's been given a marvelous makeover by Criterion. A new 4K restoration, solid audio, and nice array of supplements bolster the appeal of this release, which comes highly recommended.

Sale Price 16.87
List Price 29.95
Buy Now
3rd Party 15.38
In Stock.
See what people are saying about this story or others
See Comments in Forum
Previous Next
Pre-Orders
Tomorrow's latest releases