Who killed Mavis Marlowe? That's the burning question swirling around Black Angel, an obscure but highly entertaining film noir that's been revived and restored by Arrow Academy. Dan Duryea, June Vincent, Peter Lorre, and Broderick Crawford lead a solid cast in this slick, engaging whodunit that's distinguished by a terrific 2K restoration, lossless audio, fine supplements, and a classy, lavishly illustrated booklet. It may not rival Double Indemnity or Out of the Past, but Black Angel will delight fans of the genre and deserves to be rediscovered. Recommended.

You surely know his face, but his name may escape you. Dan Duryea enlivened countless classic films, most notably The Little Foxes, The Woman in the Window, Scarlet Street, and Ministry of Fear, often as the man you love to hate. With uncommon relish, he played some of the nastiest, scummiest, most unctuous bad guys in movie history, yet this lanky, not particularly handsome, but always riveting actor with a nasal voice and menacing sneer never seems to get his proper due. Rarely did Duryea get the chance to play a sympathetic romantic lead, but in Black Angel, a B-grade film noir that also hasn't received the attention it deserves, he wins our hearts and proves what a versatile actor he could be.

Black Angel is the last film directed by Roy William Neill, who's best known for helming scads of Sherlock Holmes movies starring Basil Rathbone and Nigel Bruce. It's more of a straightforward whodunit than a smoldering, shadowy noir, yet Neill deftly combines the two genres. Peppered with some inventive camera shots, one pivotal psychedelic sequence, and a mix of glitzy and grimy locales, the film excites the senses as it tells a well-constructed, engrossing story that keeps us guessing until close to the end. 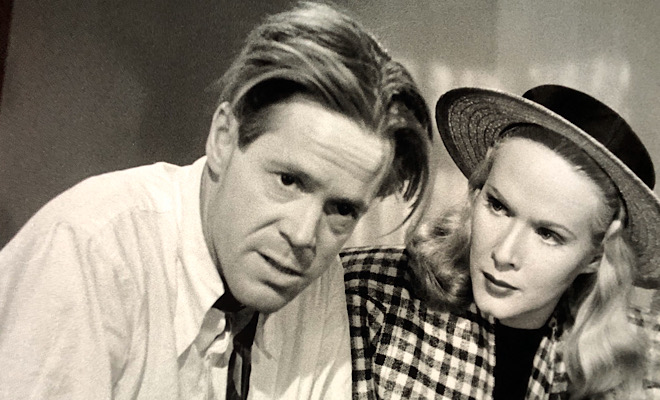 Few femme fatales get bumped off in a movie's opening minutes, but the murder of venomous vixen Mavis Marlowe (Constance Dowling) ignites Black Angel and revs the narrative's engine. Mavis's lover du jour, Kirk Bennett (John Phillips), stumbles on the scene and discovers her dead body, but a couple of boneheaded decisions make him the prime suspect, leading to his arrest and eventual conviction for the crime. Though surprised to learn her "upstanding" husband was cheating on her, Catherine Bennett (June Vincent) nevertheless believes he's innocent, and when Capt. Flood (Broderick Crawford), the police detective in charge of the investigation, refuses to offer any help, she seeks to clear Kirk by tracking down the killer herself.

First, she visits Mavis's ex-husband, Martin Blair (Duryea), an alcoholic songwriter who grieves for the heartless wife who dumped him several months ago. Catherine is convinced Martin is the murderer, but his airtight alibi crushes that theory. Though initially offended by Catherine's insinuations, Martin offers to help her, and together they hatch a plan to infiltrate a nightclub owned by Marko (Peter Lorre), a shady mobster with ties to Mavis whom Martin believes is the likely culprit. As the clock ticks ever closer to Kirk's execution, Catherine and Martin rush to find incriminating evidence against Marko, and in the process grow personally close. 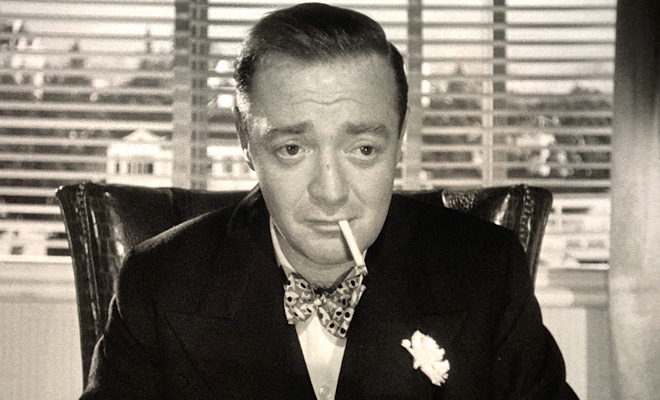 Black Angel lacks a big budget and splashy production values, but the script by Roy Chanslor, adapted from a novel by crime writer Cornell Woolrich, progresses at a brisk clip. A couple of songs add some flourish to the involving story, which features a few Hitchcockian elements that ramp up suspense. Though the murderer's identity becomes clear a bit before the big reveal, the plot successfully strings us along, and the poignant denouement laces Black Angel with unexpected resonance.

Duryea carries the film, but receives some stellar support from a top-notch cast. As the shady, sullen nightclub owner with a cigarette constantly dangling from his lips, Lorre finally gets to play a version of Casablanca's Rick, and makes the most of it. He's at his oily best here, while an abnormally subdued Crawford nicely dials down his usual bluster as the deadpan police detective. Though Vincent's Catherine is somewhat bland, Dowling is anything but as the pouty, doomed Mavis, who exits the movie much too soon.

Black Angel may not be a classic film noir, but it's an entertaining, well-mounted mystery with a few artistic accents that - like its leading man - deserves more recognition than it's gotten over the years. It's always a treat to rediscover long-forgotten Golden Age gems, and in the murky, diabolical world of film noir, Black Angel is a diamond in the rough. 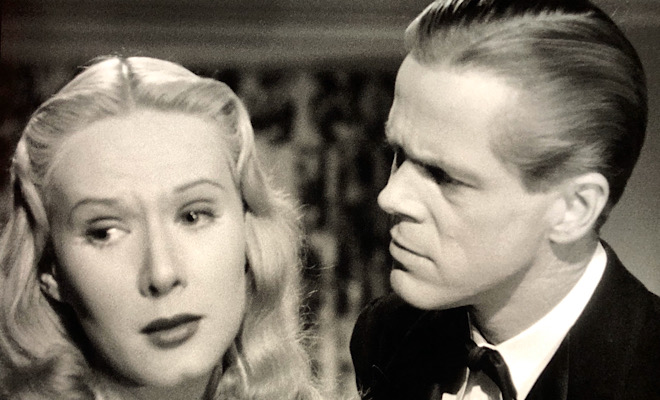 Black Angel arrives on Blu-ray packaged in a clear plastic case with reversible cover art. A 28-page booklet printed on glossy paper that includes an essay by film historian Philip Kemp, several black-and-white scene stills, a few color reproductions of promotional materials, cast and crew listings, and transfer notes is tucked inside the front cover. Video codec is 1080p/AVC MPEG-4 and audio is LPCM mono. Once the disc is inserted into the player, the static menu with music immediately pops up; no previews or promos precede it.

According to the liner notes, "an original nitrate combined 35mm fine grain positive and dupe negative were scanned in 2K resolution" for this restoration, and the resulting 1080p/AVC MPEG-4 transfer infuses Black Angel with newfound vibrancy. Grain is noticeable, but nicely resolved, so the image flaunts a lovely film-like feel. Contrast and clarity are quite good, with deep blacks, bright whites, and beautifully graded grays combining to create a pleasing, balanced image. Some scenes exhibit more softness than others (most likely, those were drawn from the dupe negative), but the variations in quality are brief and rare. The special effects shots look especially good - quite a feat considering the film's age - and close-ups render fine facial features well. A few errant nicks and a couple of faint vertical lines crop up intermittently, but overall the picture is clean, bold, and detailed. Without question, Black Angel has never looked better.

The LPCM mono track "was remastered from the restored combined mono track" and provides clear, well-modulated sound. A wide dynamic scale handles all the highs and lows of Frank Skinner's romantic music score without a hint of distortion, although fidelity seems a bit muted. The songs, however, sound rich and full, and all the dialogue is easy to comprehend. Best of all, any age-related hiss, pops, and crackle have been meticulously erased. This isn't a particularly active track, but the quality presentation allows it to seamlessly complement the video.

A couple of interesting supplements enhance this classy Blu-ray release.

Black Angel may be a little-known film noir, but hopefully this excellent Blu-ray release from Arrow Academy will expose this slick, engrossing mystery to a wider audience. The murder of a sexy, conniving siren sets director Roy William Neill's whodunit in motion, and thanks to a snappy script and vital performances, the movie's engine never stops humming. A new 2K restoration, lossless audio, a few interesting supplements, reversible cover art, and a handsomely produced, substantive booklet distinguish Arrow Academy's release. Black Angel may be a second-echelon noir, but this first-rate presentation honors an entertaining film and earns a solid recommendation.

Sale Price 20.6
List Price 39.95
Buy Now
3rd Party 28.48
In Stock.
See what people are saying about this story or others
See Comments in Forum
Previous Next
Pre-Orders
Tomorrow's latest releases