John Carpenter sends his one-man-army-anti-hero Snake Plissken to the worst place on Earth in Escape From L.A.! With Kurt Russell and a cast of colorfuls including Stacy Keach, Peter Fonda, Cliff Robertson, and Pam Grier, this is Carpenter at his most playfully cynical about the industry he's worked in for so long and it's only gotten better with age. Scream Factory unleashes a new and improved Collector's Edition complete with a new transfer sourced from a 4K restoration, a new audio mix, and a load of great new extra features. If you're a fan - this one turns the old 2010 disc into a coaster. Highly Recommended.

UPDATE: 2/16
We've heard back from our Paramount rep - they are aware of the audio issue and are currently working on a correction, they'll be sending over details as soon as it's available.

Considering previous coverage of the 2010 Blu-ray Release and the fact that Escape From New York exists - there's really little reason for me to try and recap Escape From L.A. for this review. A sequel long in gestation that wasn't met with high praise from most critics or fans of the original - it wasn't what they expected or maybe even wanted to see in a sequel featuring Kurt Russell's ocularly-challenged tough guy badass. For a 14-year-old who'd just earnestly discovered Carpenter's work - I loved seeing this movie in the theaters. It's entertaining from start to finish, but I can see why some folks don't have rosy opinions of it. 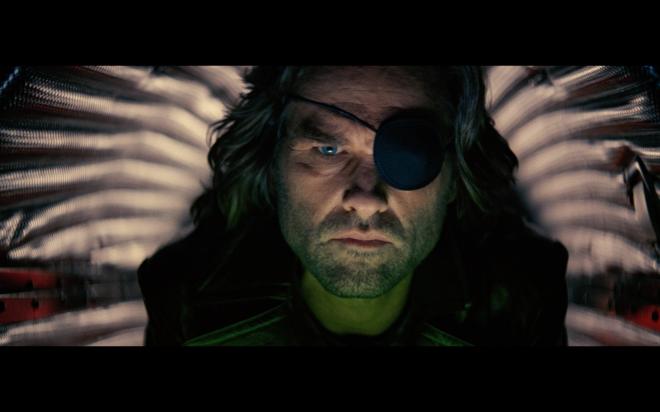 As I've gotten older and I've repeatedly devoured John Carpenter's films and watched and/or read interviews - I feel like Escape From L.A. is his comedically cynical response to where the Hollywood film industry was going. With the call for more sequels and a push for cheap-looking CGI effects, it's easy to see where he would be interested in making a takedown of the industry hand that feeds him. Especially when you look at the films he'd made in the 90s up to that point. They were either forgettable and not really "his" - Memoirs of an Invisible Man, grossly under-appreciated - In the Mouth of Madness, or dumped into theaters and scorned by critics after a recent national tragedy - Village of the Damned. You follow that progression you can see why Carpenter would have some barbs for the industry. But the satire continues for all walks of 90s American life right up to Cliff Robertson essentially playing a fascist version of Pat Robertson.

While a bit pointed, Escape From L.A. isn't just the grumblings of a crotchety old man, you can also see that Carpenter and Russell are having a hell of a great time with this one. Russell was still a solid leading presence in the 90s and he slips back into the leather duds, beard stubble, and eyepatch with ease. The movie progresses from one over-the-top set piece to the next bringing with them a bunch of great characters along the way - Bruce Campbell will always be a favorite moment. 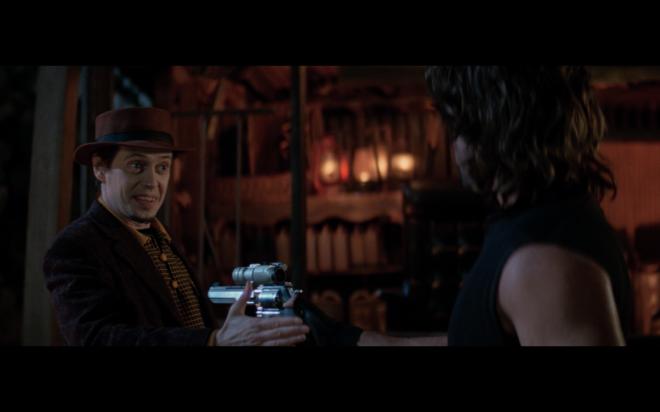 With Russell as a cowriter with Carpenter, you can see how this movie was actually an excuse for two old friends to hang out again. And I'm all for it. Sure, it's of the same story metal as Escape From New York, but then it doesn't try to set the world on fire. It's campier with a thick tongue-in-cheek sense of humor. It's a ride. If you're not enjoying the ride by the time Pam Grier's Hershey appears, you've long missed the boat. It's a shame this movie didn't work out, we could have enjoyed Escape From Mars instead of Ghosts of Mars.

Scream Factory brings Escape From L.A. to Blu-ray for its second outing with a new single-disc Collector's Edition release. Pressed on a Region A BD-50 disc, the disc is housed in a standard Blu-ray case with an identical cardboard slipcover. The interior artwork is reversible to reflect the original home video poster artwork. The disc loads to an animated main menu with traditional navigation options.

Sourced from a new 4K scan of the original negative - Escape From L.A. enjoys a new life on Blu-ray with this 2.35:1 1080p transfer. The 2010 release had issues - to say the least - ranging from a poor print source, edge enhancement, being way too bright, and what can only be described as a rather gloopy grain presence. All of that is fixed for this release. It's been 24 years since I saw this in theaters so I'm not going from memory as an indication, but I do remember this movie looking really dark in theaters. This transfer looks pretty damn dark - but not unwatchable. Black levels are deep and inky and considering Snake's gear and the uniform of the army guys, the show gets close but never hits crush territory. Details are also nicely improved allowing for a better appreciation of facial features - again Bruce Campbell looks awesome! - clothing patterns and production design all come through nicely. Colors are also better balanced. Throughout the film Snake is constantly referred to as having a blue eye - well now, it actually looks genuinely blue! Other primaries also come through nicely. Source elements are in great shape as this transfer doesn't exhibit the speckling of the 2010 master. All around a big improvement.

Escape From L.A. also benefits from a new DTS-HD MA 5.1 mix as well as a decent DTS-HD MA 2.0 mix. The stereo track is fine, but this wasn't a movie built for two-channel audio. The new DTS 5.1 mix is a rich improvement over the often stunted Dolby TrueHD 5.1 featured on the 2010 disc. That mix I felt like had to ride the volume a lot as Snake Plissken isn't one to speak up to be heard. For this new track, levels aren't an issue. Also, I felt like this track has a much stronger imaging presence. The opening earthquake sequence as an example is a cacophony of people screaming, low rumbling LFE, with cars and explosions passing through the channels and it all comes together with some welcome directional effects. When things move to the L.A. Coliseum the crowd chants ring out with a nice and open echo. The stereo track manages things alright, but it's very confined and loses the spacing and atmosphere that makes the new DTS-HD MA 5.1 track work so nicely.

Like any worthwhile Scream Factory release, there's about an hour's worth of great new bonus features attached to this Collector's Edition of Escape From L.A. The Bruce Campbell audio interview is a great piece of work - funnily enough, it lasts longer than the actor's actual screen time in the movie! The Stacy Keach interview is also a welcome sit-down with the actor. For Carpenter enthusiasts, the interview with Peter Jason is the real highlight as the man has been in so many John Carpenter movies over the years, it doesn't feel complete without an appearance from him. Sadly, nothing new from John Carpenter himself or Kurt Russell. As a fan of their commentary track for The Thing - I was hoping we could have gotten a reunion of sorts for this one. No doubt the gents at Scream Factory tried damn hard to make that happen. Maybe not as lengthy a bonus feature package as Big Trouble In Little China - but what's here is quality stuff.

Escape From L.A. invades Blu-ray once again in a greatly improved Collector's Edition from Scream Factory. John Carpenter and Kurt Russell's apparently final outing together resurrects one of the most iconic anti-heroes of the 80s that's one part action one part industry satire all tons of fun. The new transfer looks great, the new audio tracks are awesome, and the bonus features well worth digging through. If you're a fan - it's worth the upgrade. Highly Recommended.