No one does it like Jack Burton - throwing quips and rescuing damsels while in way over his head in Big Trouble in Little China Collector's Edition! John Carpenter's action-comedy teams up with Kurt Russell in this wildly entertaining 80s classic. Scream Factory delivers Big Trouble onto Blu-ray sporting the same excellent A/V presentation but upgrades the disc to true Collector's Edition status with hours of new and archival bonus features. Even if you already have this one in your collection, it's well worth the upgrade and if you've yet to pull the trigger - you can't do wrong with this release. Highly Recommended.

Action comes fast and furious to truck driver Jack Burton (Kurt Russell). After getting caught up in rescuing an innocent kidnapped girl with his pal Wang (Dennis Dun), Jack soon finds himself in over his head. Caught in the middle of a Chinatown street war, Jack comes face to face with the mythical wizard Lo Pan (James Hong) and his quest to regain immortality. With the help of a rambunctious lawyer named Gracie (Kim Cattrall), a tour-bus driver Egg (Victor Wong), Jack just might have a chance of coming out of this alive and with his truck intact. 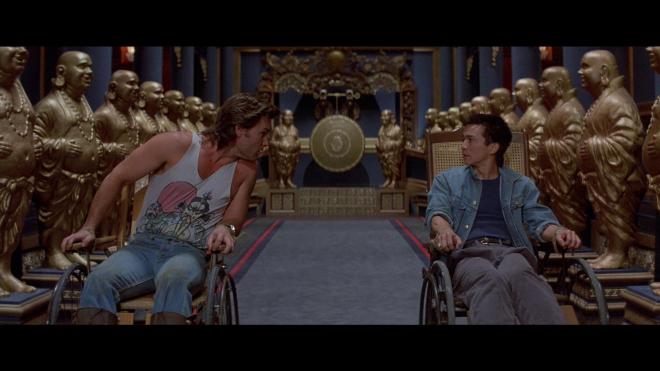 Honestly, I don't have a lot to add to that review. I love Big Trouble In Little China. It's unlike anything else in John Carpenter's catalog where it just goes all out and has fun with itself. It's not horror it's not thriller it's not science fiction and yet the film fits perfectly in line with Carpenter's filmmaking style, energy - and the man's dry sense of humor! Leading the pack is Kurt Russell who once again proves that he's the perfect lead man for Carpenter's delightfully macho unlikely hero who gets the job done even if he has no idea what's going on or what he's doing. On top of Russell, you have Kim Cattrall, James Hong, Victor Wong, and Dennis Dun going full tilt. Everyone is subscribed to the movie and it shows.

Growing up I watched Big Trouble In Little China all the time. It was always on T.V., but it was years before I actually caught the movie from the beginning. Somehow I always managed to start the movie when Lo-Pan first appears in front of Jack's big rig. When I was a kid, I just thought that's where the movie started. So when I randomly rented it on DVD years later I was surprised that there was actually a beginning to the movie! This is another one of those movies where I love it dearly but I never want to watch it too often. I have this fear that I'll turn it on and it just won't be fun anymore. It's never happened. Big Trouble In Little China is a movie that never fails to entertain - no matter how many times you watch it.

Big Trouble In Little China gets the Collector's Edition upgrade thanks to Scream Factory in a two-disc set. Pressed onto a BD-50 disc, the discs are housed in a standard sturdy Blu-ray case with identical slipcover artwork. There's also reversible case artwork representing the original poster artwork. The disc loads to an animated main menu with traditional navigation options. 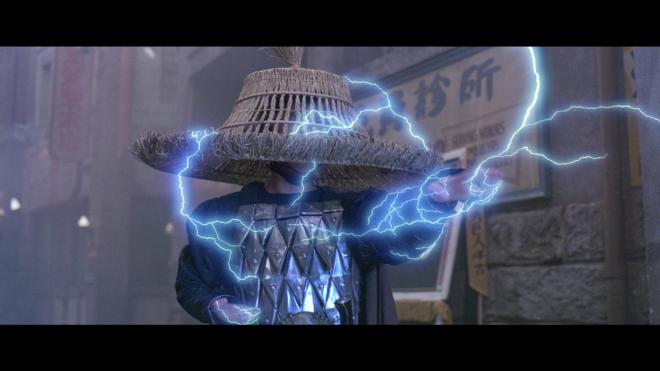 The 1080p 2.35:1 transfer is the exact same as the one from 20th Century Fox. Right down to the bitrate. Even though this master is some ten years old now - it's still a quality presentation with fine details, bold colors, strong black levels, and a natural film-like appearance. Outside of a 4K UHD Blu-ray release someday soon, this is the best the movie is going to look and that ain't a bad thing at all. 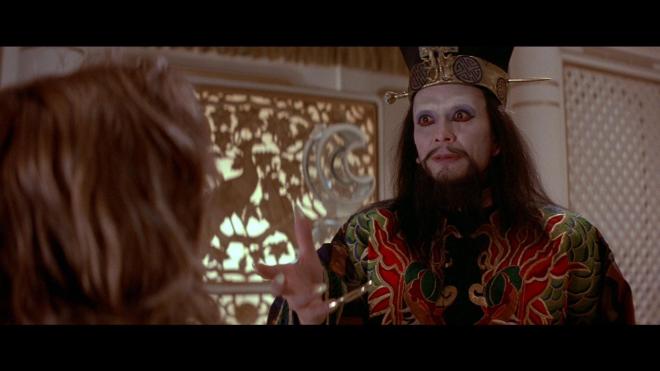 Also making a second appearance on this release are the previous DTS-HD MA 5.1 audio mix and Dolby Digital 2.0 Surround mix. The 5.1 track still holds its own in excellent form while the Dolby Digital track isn't really all that much to write home about. It gets the job done more or less but when you have that 5.1 track right there it's kind of a pointless inclusion. The 5.1 mix may have a limited surround presence at times, but when the action starts the effects are great. Turning on DTS Neural:X opens up the space a bit and gives the big fight sequences some punch and a little extra LFE rumble slips in nicely. 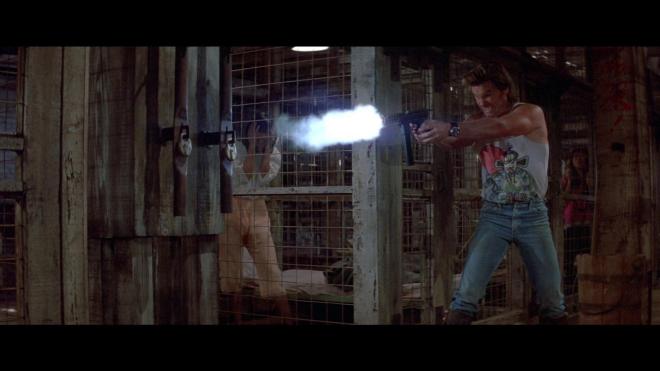 Talk about bonus features!?! There are times where I question how truly "Collector's Edition" some of Shout/Scream Factory's titles are, but in this case, it lives up to the namesake and then some. Big Trouble is blessed with all of the old previously available archival materials but is fully upgraded with some new audio commentaries and hours of new cast and crew interviews that are well worth giving a look-see. 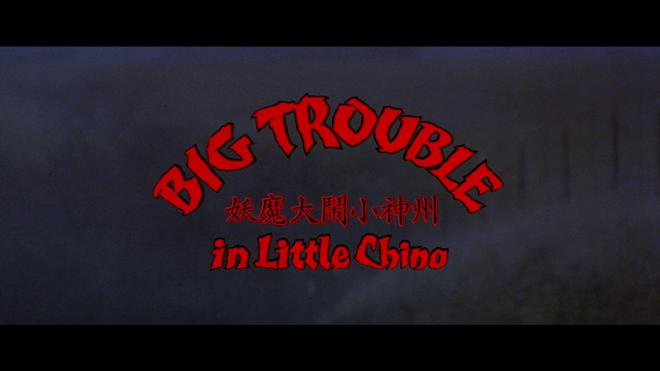 You can't go wrong with Big Trouble In Little China. John Carpenter's action opus is a delight of fast fisticuffs with dry quips delivered by a peak form Kurt Russell. It doesn't get much better than a Carpenter/Russell flick and watching this again makes one wish they made more movies together.

Scream Factory may have recycled the same video transfer and audio tracks from the previous release, but they upgraded the film to full Collector's Edition status with a massive number of bonus features. On top of all of the older bonus content, we get two new audio commentary tracks on top of dozens of new interviews and behind the scenes materials giving you several hours more stuff to pick through. Your John Carpenter collection isn't complete without Big Trouble In Little China and this new release is Highly Recommended.

Sale Price 24.95
List Price 27.99
Buy Now
3rd Party 14.93
In Stock.
See what people are saying about this story or others
See Comments in Forum
Previous Next
Pre-Orders
Tomorrow's latest releases