A Fistful of Dollars (Special Edition)

Sergio Leone ushers in an iconic Western character and gives Clint Eastwood his first headlining role in A Fistful of Dollars. The story of a gunslinger working warring gangs in a desolate border town plays beautifully against the Spanish scenery in one of the best Westerns ever made. Kino Lorber updates A Fistful of Dollars on Blu-ray with a fresh new transfer from a recent 4K restoration. Some may find the coloring controversial, however, the film has never been in better shape on home video offering robust details without hardly any signs of age-related wear and tear. On top of that, it sounds amazing and features hours of intricate and worthwhile new and archival bonus features to pick through. Highly Recommended.

A man who calls himself Joe (Clint Eastwood) rides into town on a mule. The town is split between two warring gangs, The Baxters and the Rojos. Seeing an opportunity to earn some easy money, Joe takes it upon himself to go to work for both John Baxter (Wolfgang Lukschy) and the maniacal Ramón Rojo (Gian Maria Volonté). When his conscious gets the better of him, Joe frees Ramón's kidnapped lover Marisol (Marianne Koch) to return to her husband triggering an all-out gang war putting him in the crosshairs of Ramón and his deadly accurate rifle. 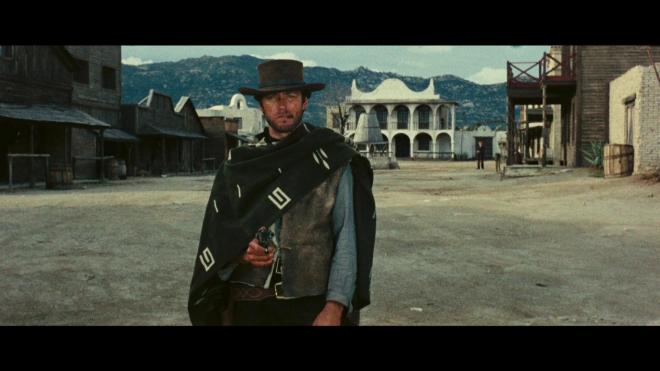 It's tough sometimes to look at a film that has long been held as a genre classic with an unbiased critical eye. It's especially hard for me because I quite literally grew up watching The Man With No Name Trilogy with my dad. For A Few Dollars More was the first one he got on VHS from Columbia House with Fistful and The Good, The Bad, and The Ugly quickly to follow. I've spent countless hours with each of these movies throughout my life. As much as I absolutely love A Fistful of Dollars, it's the weakest of the three films. The pacing isn't as sharp. Shot setups aren't as dramatic or refined as its siblings. The flick can also feel a bit long in the tooth by the time the incredible final standoff arrives. But even those criticisms are pretty mild when you look at the film as a whole. Most of those issues can be attributed to the fact that it was only Leone's second film and he was still finding his creative legs.

Eastwood may be a first-time headliner here, but you can see he was already hitting a new high point in his career and eager to expand his creative horizons. He carries the part with confidence and an ample amount of charisma to make "Joe" an interesting character to follow. His sometimes questionable morals somehow always give way to doing the right thing for innocent folk. He's never postered as a righteous character, but he has his principles.

Counter to that we get to enjoy Gian Maria Colonté's sinister and insane Ramón Rojo. He's such an energetic presence between this film and the follow-up For a Few Dollars More it's always baffled me that he never really broke out outside of Italy - and passed away entirely too young. Meanwhile, the man who dubbed Gian for these two films Nando Gazzolo got to enjoy a long career as an actor and uncredited voice actor dubbing a variety of characters. I always get excited every time I hear that grizzly voice!

I've always found it rather humorous that Sergio Leone was sued for copyright infringement by Akira Kurosawa and his producers over Yojimbo. Granted, being born over 20 years after each of these films were made, I'm looking at the situation in hindsight, but it seems like such an iconic story that it's always been a part of the Western mythology. A mysterious gunslinger or warrior wanders into a small town and works two different criminal enterprises against each other. I feel like I've seen that story or read it so many different ways and yet it's still engrossing.

Years after watching those two movies countless times I came across Red Harvest in a collected works book of Dashiell Hammett and I was surprised that this nearly identical story predated both movies by 30 years! My point is, when you toss in the equally entertaining 1996 Bruce Willis actioner Last Man Standing, you do find yourself with a story that is truly timeless. Change the location and the time period a little and you've got another compelling version of the same story we've seen and read any number of times now.

It's hard for me to go any serious length of time without pulling out one of The Man With No Name Trilogy films. As an adult with a full-time job and responsibilities, I'd guess that I watch each of them at least 2-3 times a year. It's a far cry from my spoiled youth were I'd watch them nearly every weekend, but I make due. I can't see this movie enough times. I'll always be ready and willing to stop what I'm doing and watch it.

Kino Lorber brings A Fistful of Dollars to Blu-ray in a true Special Edition release as a part of their Studio Classics Label. Pressed on a BD-50 disc, the disc is housed in a standard sturdy case with reversible artwork. The disc loads to a static image main menu with traditional navigation options. 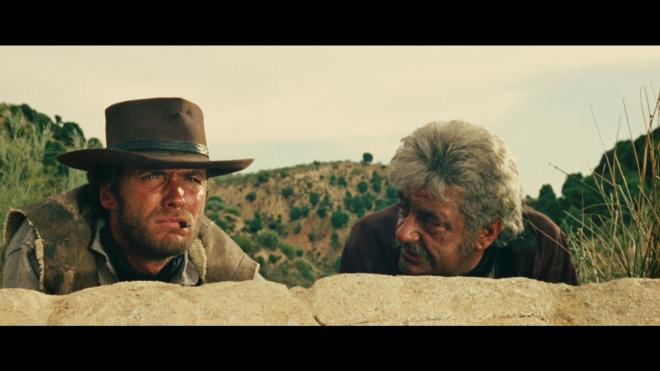 After their semi-controversial release of The Good, The Bad, and The Ugly where they attempted to pull back the yellow color timing of the recent 4K Italian Restoration, Kino Lorber has decided not to go that route here leaving the yellow grading intact. For this 1080p 2.35:1 transfer, that may be a bit of a deal-breaker for you. However, compared to MGM's initial yellow/brown push they unleashed for The Good, The Bad, and The Ugly, this new transfer isn't quite as severe. Yes it's yellow-ish and some colors are skewed, there is still some pluses worth mentioning. For starters, Reds have stronger prominence giving blood a nice crimson color while blues have an icier quality to them.

Where this transfer leaves the MGM disc behind is with the impressive restoration effort. I'm not used to the film looking so clean and blemish free! Speckling, scratches, stains, jittering frames have kind of been a staple of this film's home video presentation for decades. I just wasn't used to seeing it look so stable without all the nicks and scratches! On top of that, details have never looked better complete with a nice stable grain field. Black levels can be a bit thick - some scenes border on crush, but there is a terrific sense of depth to the image. While the yellow push may not be ideal, it's not terrible and the numerous other benefits of this new restoration and transfer outweigh the negatives. 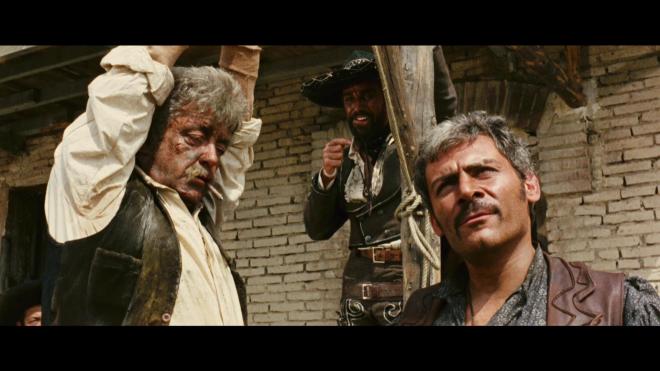 This disc doesn't have a Fistful of audio options, but it's got two pretty good ones! Packed with a DTS-HD MA 5.1 track as well as a DTS-HD MA 2.0 Mono mix, both options are very strong. Like most Italian films of the era dialogue and sound effects can have a canned quality because they didn't record any sound during the actual production. To that end, I'd say the DTS-HD MA 2.0 mono mix is the best of the bunch. It sounds more natural to previous home video presentations without the overdubbed sound effects or the unnatural sounding atmospheric spacing. Dialogue is clean and clear without any issues. Morricone's iconic score sounds amazing. Sound effects may be canned but they maintain that terrific snappy punch. Both mixes are free of any distracting hiss, pops, cracks or other distracting age-related anomalies. You'll do fine with the 5.1 track, it's a solid effort, but for my dollars, the 2.0 mono is the more traditional presentation. 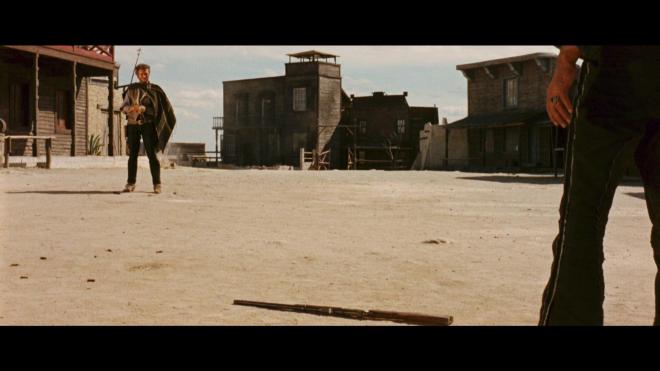 Following Kino's terrific effort for The Good, The Bad, and The Ugly, they again pulled out all of the stops with the bonus features for A Fistful of Dollars. With two new commentary tracks and several new and archival interviews, this is really a complete package of bonus features that'll keep you occupied for hours. 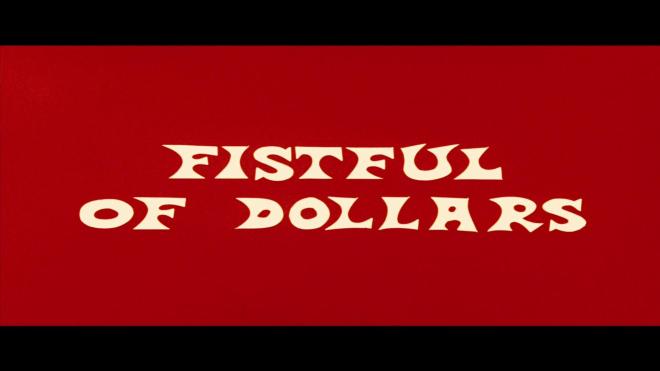 A Fistful of Dollars is a classic Western that's also the first chapter of an iconic trilogy of films that only got better with each installation. This film also made Clint Eastwood a top-lining movie star and truly kick-started Sergio Leone's career as a director. It's a story that's been told numerous times in multiple languages, but it never gets old. Kino Lorber Studio Classics delivers a first-rate Blu-ray for fans. The new image transfer may push the undesirable yellow-tinged coloring, but the cleaned up image and the 4K scan offers an incredible amount of detail to see and appreciate. With a pair of terrific audio mixes as well as a massive collection of bonus features, this disc is an easy one to call Highly Recommended.