Just Mercy stars Michael B. Jordan as real-life attorney Bryan Stevenson, who creates a practice that helps wrongfully convicted people to release them from prison. It's an emotional and significantly important subject that is plaguing the justice system today. The 1080p HD transfer and Dolby Atmos audio track are exquisite. Bonus features are quick and light, but informative. Recommended! 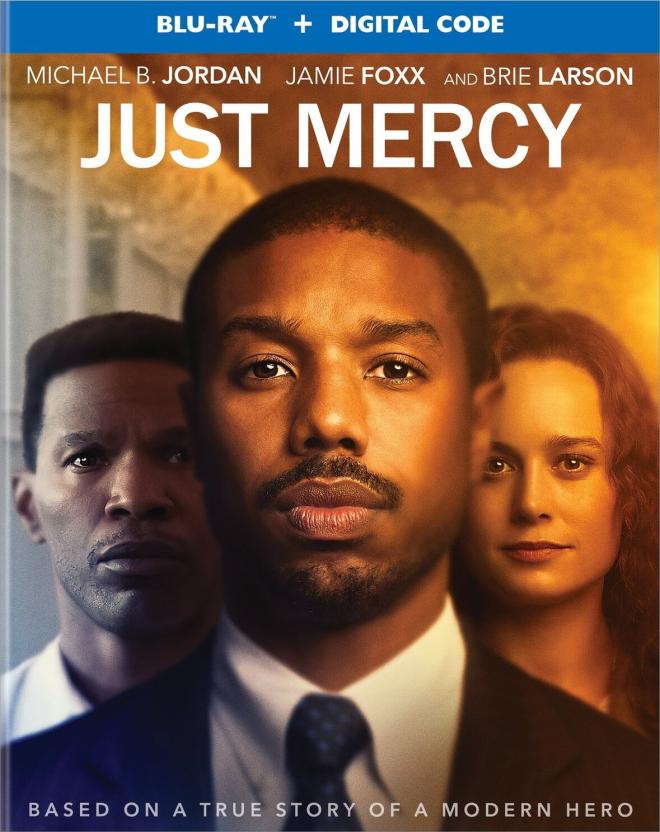 The American Justice System is in complete shambles and has been for decades, due to corrupt law enforcement, judges, and politicians whose only aim is to make themselves look good with zero mistakes ever committed. Luckily for the human race, there are people like Bryan Stevenson, a lawyer, and activist who dedicated his life to providing free legal assistance to those who have been wrongfully imprisoned. Stevenson wrote a book on his life and career that has been adapted into this fantastic and informative feature film called Just Mercy from filmmaker Destin Daniel Cretton (Short Term 12, The Glass Castle).

This true tale follows Bryan Stevenson, a graduate of Harvard Law, who quickly moved to Alabama and realized people weren't getting a fair shake in the justice system. He formed the non-profit organization with his friend and colleague Eva Ansley (Brie Larson) called Equal Justice Iniative, which gave free legal counsel for those who have been falsely accused and sentenced to prison. One particular case brought intentional attention to Stevenson and his cause, which has changed the Justice System and the world for the better.

In Just Mercy, Michael B. Jordan plays Stevenson who is a brand new lawyer, exuding confidence on the surface but is wholly unsure about everything he is working on until he arrives in Alabama and takes on the case of Alabama native Walter "Johnny D. McMillian, played by Jamie Foxx. McMillian was wrongfully sentenced to death for the murder of a white woman. Despite zero evidence placing McMillian as the killer and with one testimony from a crazy prison inmate, who was coerced into telling a lie for a reduced sentence, now Walter sits on death row and is consistently pleading that he didn't commit the heinous crime.

Cretton comes at this volatile story from a couple of different angles but ultimately reveals that the motive for the justice system not doing its job is because of prosecutors, judges, and law enforcement are not willing to seek out the truth in fear of their reputation, along with some heavy racist backgrounds. What seems like a crystal clear case, turns into a crazy obstacle course for Stevenson and Ansley as they try and convince the courts that McMillian is innocent.

Cretton uses a lot of routine genre tropes of this caliber, but it somehow works successfully here, pulling on the heartstrings along with those anger chords that can amp up any person disgraced with the current judicial situation. Foxx, Larson, and Jordan all play their parts with excellent conviction and emotion, implementing that this body of work was very important to them, as it should be to everyone because this grave injustice is still happening in the world. And this film Just Mercy sheds important light on the good and bad of this broken system quite perfectly.

Just Mercy exonerates itself to Blu-ray from Warner Bros. There is no DVD edition of the film included, however, there is a Digital Copy.  The disc is housed in a hard, blue plastic case with a digital copy insert. There is also a cardboard sleeve that features the artwork of the three main characters of the film.

Just Mercy serves its way to Blu-ray in a 1080p HD transfer in 1.85:1 aspect ratio from Warner Bros. Oddly, the film was shot in 4K, but Warner Bros. has not released the film in that format yet.

This 1080p transfer though looks beautiful though in the confines of courtrooms and other office buildings throughout the film. The color palette has a slight, brown and earthy tone to it, almost void of bright primary colors that pop off-screen. Most of the colors are a mix of browns, off-whites, and gold, with a hint of light blue and gray in suit colors and the prison walls. Like its tone, this is a rather gloomy looking film, but none-the-less beautiful to watch. Black levels are deep without any evidence of crush or murky shadows, and the skin tones are natural.

The detail is sharp and vivid, revealing great facial features and costume textures. Each curly hair on Brie Larson's head to the facial pores on Michael B. Jordan's face is easily seen, as is the fine stitching in the suit and ties that the characters wear. Wider shots reveal wood grin in the walls and benches at the courtroom and the textured stone at the prison. The whole image looks great and satisfying with no video problems to speak of. 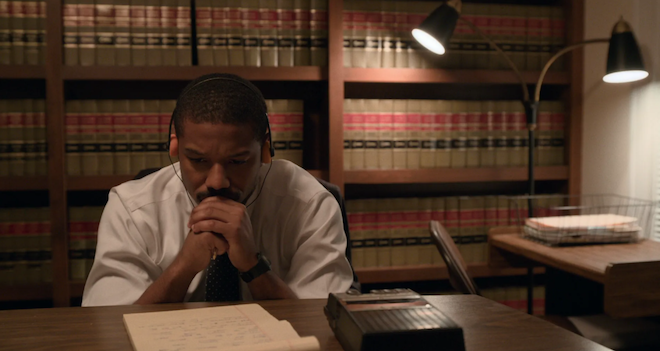 Just Mercy comes with a surprising Dolby Atmos mix that doesn't fully blast the speaker system into outer space like it was a summer blockbuster, but rather provides an intimate and nuanced sound design that is fully immersive.

There aren't any explosions or major gun battles in Just Mercy, but rather a lot of significant dialogue and speeches that are made throughout its course. The Dolby Atmos track provides the necessary reverb and directionality when in large courtrooms, small houses, or in outdoor exteriors that sounds wonderful. The echo in these particular chambers resonates throughout the speakers nicely.

There is even a small portion of noises from the height speakers in the prison where voices of the convicted can be heard above and in the surround speakers. The music score always delivers on emotional moments with big swells and dramatic notes and the low end of bass has a nice rumble to it when that subtly kicks into gear. Dialogue is presented and free of any audio issues in this elegant Dolby Atmos track. 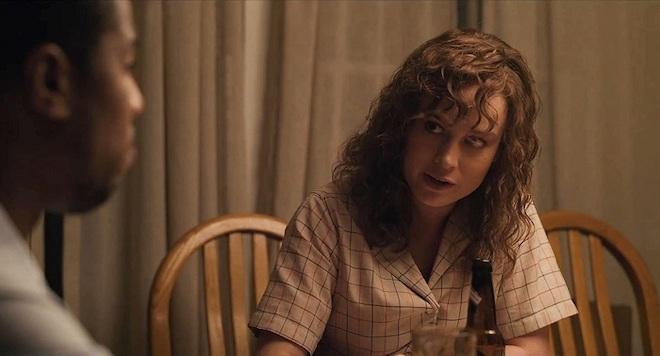 There are about 33 minutes of bonus features here, all of which are fluff EPK pieces, along with a few deleted scenes. 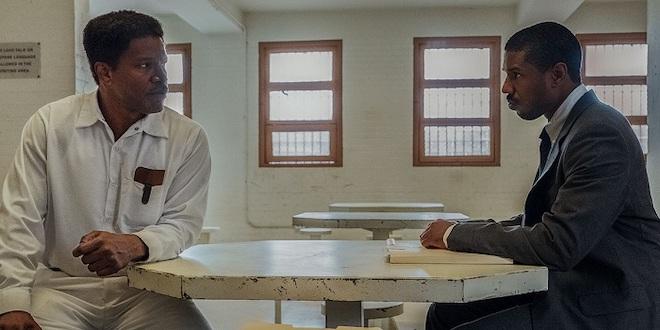 Just Mercy is an important film that should be seen by all that is based on a true story and tackles the ongoing evil and corrupt people in charge that work in the judicial system. An all-star cast hits a home run with their performances and filmmaker Destin Daniel Cretton delivers a fantastic verdict with his biopic on an amazing team and the company they created to help people in need. The video and audio presentations are both top-notch, but the extras are a little lackluster. Still, Just Mercy is Recommended!