Leave Her to Heaven - Criterion Collection

A searing, at times horrifying portrait of unhinged jealousy that's deceptively swathed in rich Technicolor hues, Leave Her to Heaven stands as one of Hollywood's most unique and riveting film noirs. Gene Tierney gives a bravura performance as a possessive wife who ruthlessly removes anything that stands between her and husband's love. Criterion's new transfer culled from a 2K restoration dazzles the eyes, while excellent lossless audio showcases Alfred Newman's robust score. Supplements are maddeningly slim, but that's the only disappointing aspect of this high-quality release, which comes highly recommended.

"Of all the seven deadly sins, jealousy is the most deadly."

"Typical" film noir femme fatales are greedy, grasping, conniving, and predatory. They use sex and sob stories to ensnare their prey in tangled webs of treachery, then coax these lustful, macho, yet shockingly naive saps to do their deadly bidding before brutally double-crossing them. Though the vicious vixens of noir may be photographed in black-and-white, their twisted psyches are muddied in myriad shades of gray that make them forever fearsome and fascinating.

Ellen Harland is anything but typical. Wealthy, elegant, erudite, and bursting with selfless love, this statuesque beauty doesn't pine for material things or riches beyond her wildest imagination, nor is she anxious to bump off her strapping, handsome spouse. All Ellen wants to be is the perfect wife...and all Ellen wants from her husband is his unequivocal love and undivided attention.

That doesn't sound like much of a noir plot, and Leave Her to Heaven, shot in glorious Technicolor and set against a host of stunning scenic backdrops, doesn't much look like a noir film. Looks, though, like femme fatales, can be deceiving, and both Ellen and the movie she dominates turn out to be two of the nastiest yet most delicious and unusual specimens the genre has ever produced. 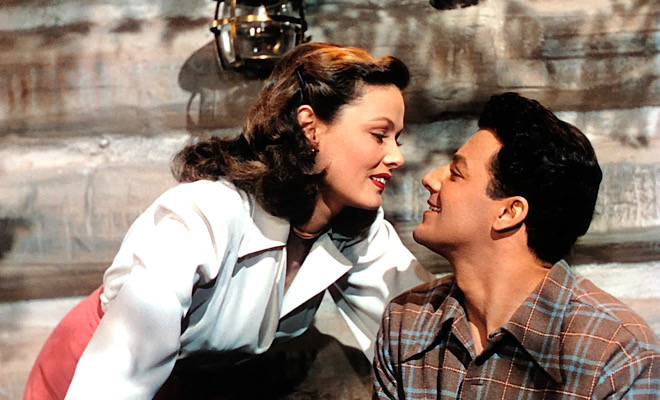 Few films depict the insidious nature of evil and sociopathic behavior better than director John M. Stahl's adaptation of Ben Ames Williams' bestselling novel. The soothing Technicolor photography and quiet manner in which the narrative unfolds initially lull the viewer, so when the violence and manipulations occur, the shock value multiplies exponentially. Factor in a cold-blooded "heroine" who's able to camouflage her neuroses and project a chillingly calm demeanor while committing horrific acts and you've got a complex, engrossing, and wonderfully disturbing motion picture.

"I love you so," Ellen (Gene Tierney) coos to her husband Richard (Cornel Wilde), a successful novelist whom she impulsively married after a whirlwind courtship. "I can't bear to share you with anybody." That sounds like a sweet declaration of devotion, but it's really more of a thinly veiled threat...and the resulting ramifications are dire. Ellen can't abide being second best, even for a fleeting moment. Her maniacal possessiveness drove her beloved father to an early grave, and now that same insane jealousy threatens to poison her relationship with Richard, who adores his wife, but can't crack the armor that shields her emotions and hides her venomous tendencies. It doesn't matter what stands in Ellen's way; whether it's Richard's work, his friendship with her adopted sister Ruth (Jeanne Crain), his devoted caretaker (Chill Wills), even his close relationship with his polio-stricken teenage brother Danny (Darryl Hickman). If it draws Richard away from her, Ellen systematically and cruelly plucks it from the plate and destroys it.

Leave Her to Heaven was 20th Century-Fox's highest grossing film of the 1940s - quite a distinction given the studio's prestigious output during that decade - and it's easy to see why. The picture's lush, glossy presentation (its Technicolor cinematography won Leon Shamroy an Oscar), melodramatic plot, and excellent performances all contribute to its success, yet it's the eerie, nefarious mood juxtaposed against several bucolic locations and Tierney's breathtaking loveliness that lend the film its intoxicating and enduring edginess. Hardly anyone on screen ever raises their voice, but such decorum doesn't diminish dramatic tension. Unlike most film noirs, the quiet scenes are the most shocking, and one in particular stands as an iconic sequence that still induces agonizing squirms today.

Describing it would spoil the devastating effect, but when you see Ellen in a rowboat on a crystal blue lake wearing black-as-night sunglasses that wickedly contrast with her blazing red lipstick (see the Criterion cover art above)...buckle up. Wisely, Stahl lets the harrowing scene play out without any underscoring, fancy camera work, or other distractions, which heightens its gut-churning effect. 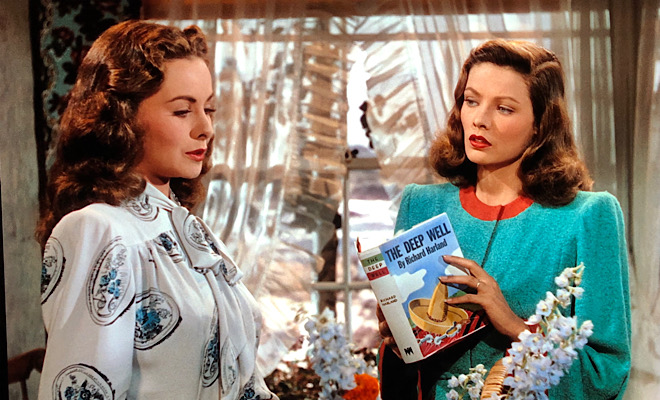 Stahl produced his best work (the original versions of Imitation of Life, Magnificent Obsession, and Back Street) during the early 1930s. Leave Her to Heaven, released five years before his death at age 63 in 1950, would be his last major film, and it fittingly defines his understated style and ability to draw superior performances from his leading ladies. Tierney respected him greatly. In her autobiography, Self-Portrait, she writes, "[Stahl] showed such confidence in me that I blossomed under his approval...I am grateful to John for allowing me to play Ellen as I understood her." Their collaboration earned Tierney her first and only Best Actress Oscar nomination. Though she would lose the award to Joan Crawford in Mildred Pierce, Tierney's intense, measured, completely riveting portrayal remains indelible, and proves beyond a doubt she was far more than a Hollywood glamor girl. Laura will always stand as her signature film, but Leave Her to Heaven is indisputably Tierney's finest hour.

As the often oblivious, far-too-forgiving husband, Wilde is saddled with a thankless role, and Vincent Price hams it up as an overzealous district attorney. Jeanne Crain, however, files a winning performance, as does Mary Philips (who, interestingly, was Humphrey Bogart's first wife back in the 1920s) as Ellen's tortured mother. Their work nicely complements Tierney's, but never eclipses it. When Ellen is on the screen, she steals the focus from everyone else.

Though you won't find an image from Leave Her to Heaven next to a definition of film noir in a cinema encyclopedia, this gripping Technicolor drama dominated by a quintessential femme fatale more than qualifies as a stellar genre entry. Its unique elements make the movie all the more intriguing and appealing, and enhance the tale's dark, unsettling themes. Jealousy isn't pretty, but juxtaposing its ugly nature on Gene Tierney's beautiful face makes this 1940s classic unforgettable. 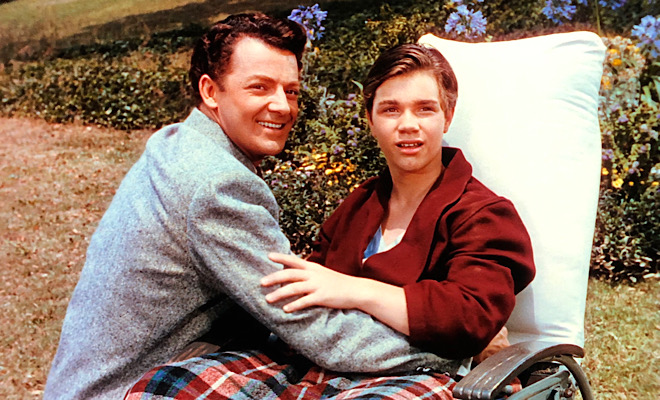 The Criterion edition of Leave Her to Heaven arrives on Blu-ray packaged in a standard Criterion case. A 12-page, fold-out booklet featuring an essay by crime novelist Megan Abbott, a cast and crew listing, transfer notes, and a couple of gorgeous full-page color scene shots is tucked inside the front cover. Video codec is 1080p/AVC MPEG-4 and audio is LPCM mono. Once the disc is inserted into the player, the static menu with music immediately pops up; no previews or promos precede it.

Sparkling, vibrant, and lush are only some of the adjectives that describe Criterion's 1080p/AVC MPEG-4 transfer. The liner notes state "this new 2K digital restoration was undertaken by Twentieth Century Fox and the Academy Film Archive, with support from The Film Foundation. A new digital transfer was created from a 35 mm color reversal internegative. A 35 mm nitrate IB Technicolor print was used as a reference point for picture restoration..." From the opening credits to the final fadeout, the image dazzles the eye with superior clarity and contrast, sumptuous Technicolor, and terrific detail levels, all of which allow us to fully appreciate Leon Shamroy's Oscar-winning cinematography. Faint grain provides a hint of essential texture and preserves the film-like feel, while excellent shadow delineation, gorgeous day-for-night shots, and stunning exteriors combine to produce an often breathtaking picture.

Primaries, especially reds, pop off the screen. Verdant green landscapes, crystal blue skies, and pastel flowers also perk up the canvas. Three-strip Technicolor often can look over-saturated and artificial, but not here. The garish hues have been tamped down just enough to create a natural color temperature without dulling the vibrancy that's such an essential element of the format.

Intricate wallpaper designs and furniture upholstery patterns are crisp and distinct, and then there are those close-ups! Accented by ruby red lipstick, wavy brunette tresses, and a peaches-and-cream complexion, Tierney's icy glamor bursts forth with a bewitching allure that enhances her character's devious nature. Flesh tones occasionally appear a bit pasty and err a tad on the yellow side, but that's about the only deficiency of this top-flight transfer. Topping it all off, not a single nick, scratch, or mark dots the pristine source material.

Unfortunately, I don't have the 2013 Twilight Time release, so I can't compare the two transfers. While any differences may be slight, I can't imagine Leave Her to Heaven looking any better than it does here. Once again, Criterion hits it out of the park.

Leave Her to Heaven received an Oscar nod for Best Sound Recording, and Criterion's excellent LPCM mono track helps us understand why. According to the liner notes, "the original monaural soundtrack was remastered from a 35 mm composite fine-grain master track." A wide dynamic scale handles all the highs and lows of Alfred Newman's bold, dramatic score without any distortion, and superior fidelity and tonal depth along with strong bass frequencies bolster the music's impact and allow it to fill the room with ease. All the dialogue, even Tierney's breathy whispers, are clear and easy to comprehend, and subtle atmospherics like chirping birds and crashing surf nicely augment the action. Any age-related hiss, pops, or crackle have been meticulously erased, leaving a clean, crisp track that enhances but never overwhelms this gripping film.

Sadly, Criterion skimps on the supplements. None of the extras from the 2013 Twilight Time release, which included a commentary by film critic Richard Schickel and a Fox Movietone News clip, have been ported over to this release. What we get instead are the film's re-release theatrical trailer and the 27-minute featurette "Imogen Sara Smith on John M. Stahl's Leave Her to Heaven," which is presented in high definition. Among other topics, this informative and absorbing piece examines Stahl's directorial career and how Leave Her to Heaven fits into his film canon. Smith calls Leave Her to Heaven "an outlier from [Stahl's] body of work" that possesses more visual beauty than his other pictures. She also astutely examines the character of Ellen and Tierney's admirable portrayal, the influence of four-time Oscar-winning cinematographer Leon Shamroy, and the vital role Technicolor plays in the movie. It's a thorough discussion, but sadly, it only whets our appetite for more material.

A unique, often spellbinding film noir that brilliantly masks its insidious nastiness with the soothing hues of sumptuous Technicolor, Leave Her to Heaven still has the power to shock and horrify audiences. Excellent performances, classy production values, and a literate script distinguish director John M. Stahl's quiet yet lethal thriller about an insanely jealous wife's desperate attempts to completely possess her husband. Criterion presents this dark classic in glorious splendor, thanks to a brand new 2K restoration that showcases Leon Shamroy's breathtaking Oscar-winning cinematography. Top-notch audio also enhances the presentation, but extras are frustratingly slim. An upgrade from the 2013 Twilight Time release may not be necessary, but this edition stands on its own as a marvelous tribute to an enduring film. Highly Recommended.