A quasi-film noir that oozes style but lacks a compelling narrative, Manon nevertheless casts a hypnotic spell and reminds us just what a brilliant artiste Henri-Georges Clouzot was. The man who brought us The Wages of Fear and Diabolique produces yet another fascinating piece of cinema, and Arrow Academy honors his vision with a glorious video transfer, solid lossless audio, interesting extras, and a handsome 24-page booklet. The tale of squabbling lovers on the run in post-World War II Europe may be unfocused and at times unbelievable, but Clouzot's artistry is dialed in and often dazzling, and for that reason, Manon is well worth a look.

Henri-Georges Clouzot was a towering figure in French cinema. His lyrical, often mesmerizing style bridged the gap between two important film movements - poetic realism and the avant-grade New Wave - and his pessimistic view of life incisively reflected the cynicism that pervaded post-World War II Europe. His two most famous works - the dynamite thrillers The Wages of Fear and Diabolique - remain iconic classics, but his lesser known productions cast a similar hypnotic spell, even if their narratives don't measure up.

One of those movies is Manon, an intriguing, beautiful, disjointed, often preposterous tale of doomed romance adapted from an 18th century novel by Abbé Prévost. Clouzot and co-writer Jean Ferry update the setting to post-World War II France and infuse the sordid story with effective film noir underpinnings that heighten its visual and thematic impact. Though the mercurial, headstrong heroine often drives her obsessed boyfriend - and the audience - to distraction, her unpredictable antics and wild mood swings make for entertaining, if not particularly plausible, cinema.

As the film opens, a French steamer bound for Egypt shelters a group of adrift Jewish refugees fleeing to Palestine. While getting them settled in the ship's bowels, the crew discovers two bedraggled stowaways, Robert (Michel Auclair) and his girlfriend Manon (Cécile Aubry), who we soon learn are fugitives from justice. Lengthy flashbacks reveal how the couple met in a bombed out Normandy village, where he was a French freedom fighter and she stood accused of consorting and collaborating with German soldiers. 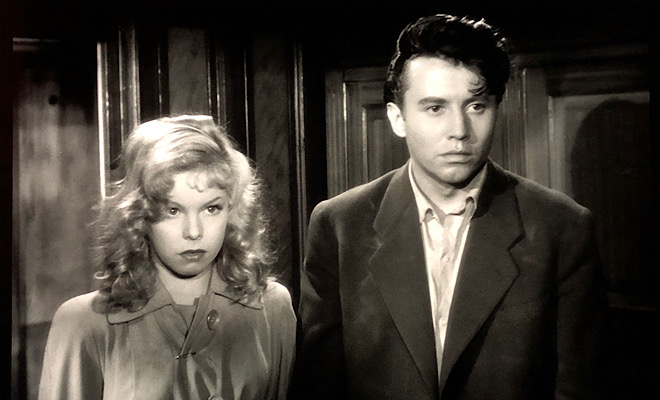 Initial mutual disdain and distrust turns almost instantly into passionate, all-consuming love, yet difficult circumstances constantly test the couple's devotion when they move to Paris to seek their fortune. The fickle, free-spirited, selfish Manon becomes torn between her love for Robert and fierce desire for money, finery, and a cushy, pampered lifestyle. To get what she wants, she willingly turns to prostitution. That devastates Robert, who becomes a black market profiteer to try to satisfy her insatiable greed and hang on to her. Yet when Manon's unscrupulous brother (Serge Reggiani) begins meddling in their lives and manipulating Manon, their tempestuous affair reaches the breaking point.

The plot of Manon, which won the Golden Lion Award at the 1949 Venice Film Festival, goes off the rails with alarming frequency, but Clouzot's artistry remains consistent and impressive throughout. Whether he's filming sequences amid the rubble of Normandy ruins, on a packed-to-the-gills train, in a dingy Paris movie theater, or on the blistering sand dunes of the Egyptian desert (where the story's surreal climax transpires), Clouzot crafts an array of stunning images that dazzle the eye and keep us invested in the head-scratching narrative. With apologies to Al Pacino in The Godfather, Part III, just when we're ready to throw in the towel on Robert and Manon's bizarre relationship, Clouzot reels us back in. We may not care much about the characters, but we can't wait to see what this masterful director does next.

He also does an excellent job depicting the confusion, disarray, disillusionment, and desperation that defined the dog-eat-dog world of post-war France. The country was in ruins, lives were in ruins, displaced people wandered aimlessly about, striving to find direction and longing to dig themselves out of poverty, lay down roots, stake their claim, and secure a stable financial future. It was an uncertain, amoral time, and both Robert and especially Manon are all-too-typical products of this corrupt environment, which Clouzot astutely realized would be a perfect breeding ground for a sensual film noir. 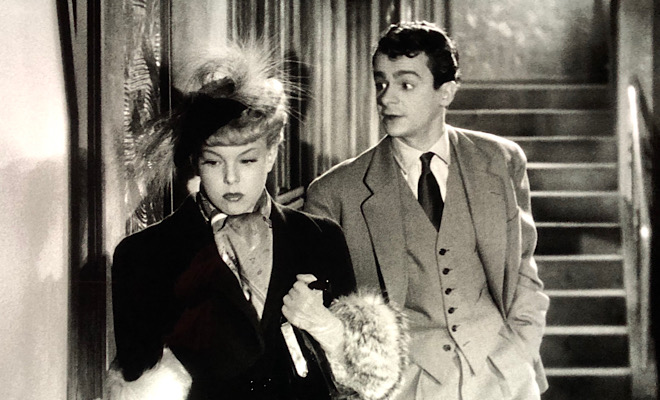 To that end, Manon possesses many classic femme fatale qualities. She's a conniver, a cheat, and a shameless flirt who can wrap men around her little finger just by batting her eyes and adopting a coquettish pout. That pout, though, betrays a childlike innocence that often belies her adult antics and makes her much less vicious than such incendiary American femmes as Phyllis Dietrichson in Double Indemnity and Cora Smith in The Postman Always Rings Twice. Brazenly independent one minute and a sniveling cling-on the next, Manon is an exhausting character who tries our patience, and the alluring Aubry, who was merely 20 at the time the movie was shot, marvelously captures her essence.

Auclair is a smoldering presence as well. He exudes a raw, brooding masculinity that nicely complements Manon's frivolity. Their scenes together - especially the steamy one when they first indulge their carnal urges - sizzle with both sexual tension and a heartbreaking, almost psychotic codependency that reaches a fever pitch as the film progresses. Aubry's career would be brief (she made only 10 films, one of which was the swashbuckler The Black Rose with Tyrone Power and Orson Welles, before turning to writing and directing), but Auclair would enjoy a lengthy tenure in French movies, and would appear in two notable American features set in France - Funny Face, in which his beatnik character is the object of Audrey Hepburn's idolatry, and the tense political thriller The Day of the Jackal.

The real star of Manon, though, is Clouzot. Without his stylish visuals, creative audacity, and wonderful sense of the absurd, this fractured tale of love, sex, and violence would lack any cohesion whatsoever. Clouzot can't quite salvage the crazy story, but he infuses it with an infectious vitality and brazen brashness that make us want to revisit it. Great filmmakers can rise above subpar material, and here, Clouzot does just that. 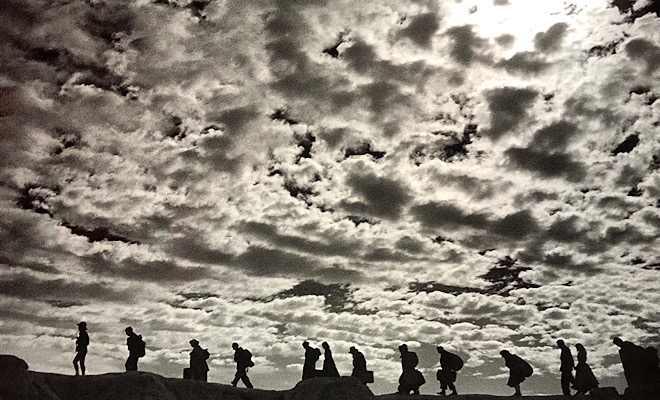 Manon arrives on Blu-ray packaged in a standard clear case with reversible cover art. A handsome 24-page booklet printed on glossy paper that features an essay by film historian Ginette Vincendeau, a cast and crew listing, transfer notes, and several gorgeous black-and-white photos is tucked inside the front cover. Video codec is 1080p/AVC MPEG-4 and audio is LPCM mono. Once the disc is inserted into the player, the full-motion menu with music immediately pops up; no previews or promos precede it.

Manon itself may be a bit uneven, but the 1080p/AVC MPEG-4 transfer from Arrow Academy is wonderfully consistent...and consistently stunning. From the opening credits onward, the picture exudes that elusive wow factor that really elevates classic black-and-white movies. Grain fluctuates a bit throughout, but is largely unobtrusive, resulting in a sleek, smooth, yet utterly film-like image. Contrast, clarity, and gray-scale variance are all top-notch. Blacks are lusciously rich, whites are bright but never bloom, and background details are easy to discern. Excellent shadow delineation enhances the picture's noir accents, while close-ups showcase fine facial features well. Even the desert sequences look perfectly modulated. Best of all, only a few errant nicks and marks dot the pristine source material. With a black-and-white image this lush, who needs color?

The LPCM mono track supplies clear, well-balanced sound. Excellent fidelity enhances the impact of Paul Misraki's music score, which fills the room with ease, and a wide dynamic scale handles all of its highs and lows without a hint of distortion. Dialogue is well prioritized, and any age-related hiss, pops, or crackle have been meticulously erased, leaving a clean, nuanced track that nicely complements the visuals without detracting from them.

A few substantive supplements heighten the appeal of this classy release. An audio commentary would have added extra context and perspective, but is sadly absent.

Its story wanders all over the map - literally - and often strains credulity, but superior artistry and excellent performances makes Manon worth watching. Henri-Georges Clouzot's quasi-film noir about a tortured love affair set against the turbulent backdrop of post-World War II Europe can't compare to his two masterpieces - The Wages of Fear and Diabolique - but its seductive style keeps us engaged. Arrow Academy honors the captivating visuals with a stunning transfer, and fills out its impressive Blu-ray presentation with solid lossless audio, absorbing supplements, and a gorgeous 24-page booklet. Manon is a little weird, often wild, and just wonderful enough to make it worth a look.