The Bells of St. Mary's may be a follow-up to Going My Way, but director Leo McCarey's inspirational tale of a struggling parochial school, its committed staff, and the endearing students who populate it stands on its own as a thoroughly enjoyable and heartwarming film. Bing Crosby reprises his Oscar-winning role of Father O'Malley and Ingrid Bergman makes a fine and radiant foil as the rigid nun who gently clashes with him. Olive Films gives the picture its coveted Signature treatment that features a brand new 4K restoration, lossless audio, a wealth of supplemental material, and upgraded packaging. Though it's not really a Christmas movie, The Bells of St. Mary's plays especially well this time of year when its uplifting themes resonate most strongly. During any season, though, this beautifully made film comes highly recommended.

Sequels of Oscar-winning movies usually don't receive the same level of Academy recognition as the originals that spawned them. The Godfather and The Godfather, Part II are notable exceptions, and on the other side - way other side - of the thematic spectrum, so too are the inspirational and life-affirming dramas Going My Way and The Bells of St. Mary's. The former film won seven Oscars (Best Picture, Actor, Director, Supporting Actor, Screenplay, Original Story, and Song). Though the only Oscar The Bells of St. Mary's received was for Best Sound Recording, director Leo McCarey's follow-up to Going My Way - produced just a year later - garnered seven other nominations, including Best Picture, Actor, Actress, Director, Editing, Song, and Score. It was also the first sequel ever to be nominated for Best Picture and stands as the most successful release in the history of RKO Radio Pictures.

Bing Crosby's benevolent portrayal of Father Chuck O'Malley, a jovial, big-hearted Catholic priest, is the lynchpin that connects the two films, but to shake things up, McCarey wisely traded testosterone for estrogen in the narrative structure of The Bells of St. Mary's, shifting the focus from O'Malley and his male colleagues to the lively sisterhood that populates an inner-city parish. Sister Mary Benedict (Ingrid Bergman) is the upstanding, pious principal of the St. Mary's School, which due to crumbling infrastructure is in danger of being shut down. Enter Father O'Malley, who's tapped to lead the parish after its zealous nuns presumably drove his elderly predecessor into a nursing home.

"I can see you don't know what it means to be up to your neck in nuns," the parish housekeeper tells Father O'Malley, and to an extent, she's right. Though they get along and respect each other, Father O'Malley and Sister Benedict occasionally clash. She steadfastly follows the rules; he bends them when they inhibit a student's personal development and/or emotional well being. Together, though, they attempt to secure the donation of an adjacent building currently under construction that would be the perfect new home for the school. Unfortunately, the building's grumpy owner, Horace Bogardus (Henry Travers), a selfish businessman with a weak heart whose only concern is padding his personal coffers, stands in their way. As the school year progresses, Father O'Malley and Sister Benedict seek to soften Bogardus while dealing with the personal and academic problems of a couple of troubled students.

Episodic in nature, The Bells of St. Mary's seamlessly stitches together its innocuous narrative threads, thanks to a literate screenplay by Dudley Nichols that mixes warmth, whimsy, and light comedy with tear-jerking drama. The story deftly tiptoes around some provocative themes, and though some subplots play out better than others, an appealing authenticity pervades the production and makes it easy to forgive any missteps. McCarey, much like fellow director Frank Capra, gives sentiment a good name by provoking honest emotional responses without any undue manipulations or treacly trimmings.

Inspirational films are always tricky, because the uplifting themes they admirably promote often fall victim to a maudlin, sugary presentation that can dilute or even nullify their impact. The Bells of St. Mary's escapes that trap because McCarey favors simplicity over bombast and adopts a less-is-more attitude that lets the story speak for itself. Not a lot happens over the course of two hours, but the characters are so endearing and their interplay so natural and relatable we're more than happy to spend a good chunk of time with them. 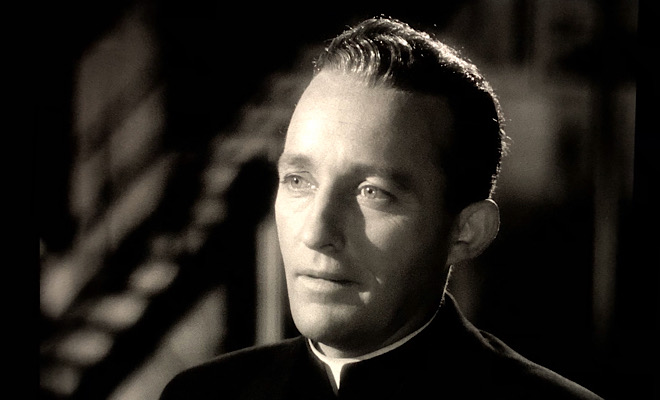 Some of the comedy can be trite, but it works within the film's gentle, unassuming framework. McCarey is a master at tickling the funny bone one minute and tugging the heartstrings the next, and never is that talent more evident than during a too-cute-to-be-believed nativity play put on by a group of kids not much older than 6. Rarely do children seem more unaffected on screen, and their improvised and utterly charming interaction will warm your soul.

As will Crosby and Bergman. Of course Bing croons a couple of tunes (including a beautiful rendition of "Adeste Fidelis"), but his easygoing acting style eclipses his dulcet baritone, relaxing what could be a stuffy, mechanical tale. He creates a surprisingly tender chemistry with Bergman, whose ethereal radiance made her a natural for religious parts. (A few years later, she would convincingly play of Joan of Arc.) Fresh from her Oscar-winning performance in Gaslight, Bergman fully embraces the role of Sister Benedict, creating one of the most believable nuns in screen history. Goodness, empathy, and piety emanate from her core, and like the best religious ambassadors, she lifts the film to a higher plane.

In other roles, Henry Travers, who would memorably play cinema's most famous guardian angel a year later in It's a Wonderful Life, portrays the Scrooge-like grouch Bogardus with relish, while Joan Carroll, who was overshadowed by on-screen sibling Margaret O'Brien in Meet Me in St. Louis the previous year, unequivocally shines as the insecure Patsy Gallagher, who struggles to overcome a difficult home life and meet the school's rigorous academic standards. Though she would live to the ripe old age of 85, the 14-year-old Carroll would retire from acting shortly after The Bells of St. Mary's was released - a great loss to movie fans.

The social and political climate of World War II may have heightened the appeal of The Bells of St. Mary's at the time of its release, but like many well-made inspirational movies, McCarey's film has stood the test of time and remains relatable, meaningful, and comforting even in today's hyper-cynical age. Watching it recently, I allowed the waves of good feeling to wash over me, and felt refreshed and renewed. Difficult times abound, but movies like The Bells of St. Mary's provide a brief yet very welcome respite from all the noise. This holiday season, it just might be the cure for what ails us. 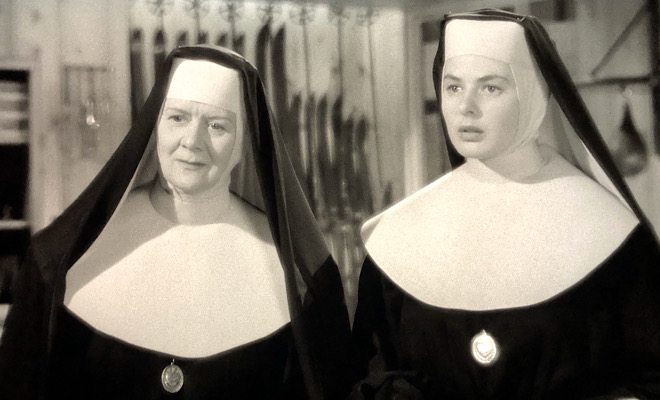 The Olive Signature edition of The Bells of St. Mary's arrives on Blu-ray packaged in a standard case inside an attractive slipcase with a vintage matte finish. An eight-page booklet printed on glossy paper and featuring an essay by Abbey Bender, several black-and-white scene and production stills, and a color reproduction of the movie's poster art is tucked inside the front cover. Video codec is 1080p/AVC MPEG-4 and audio is DTS-HD Master Audio 1.0. Once the disc is inserted into the player, the static menu without music immediately pops up; no previews or promos precede it.

A brand new 4K restoration lifts The Bells of St. Mary's to new visual heights. The 74-year-old film has never looked better, and Olive's high-quality 1080p/AVC MPEG-4 transfer infuses it with both vitality and a cozy warmth that reflects and enhances the sentimental story. A natural grain structure maintains the feel of celluloid, and though levels occasionally fluctuate, the overall presentation remains consistent. Contrast runs a tad hot, creating a slightly over-bright picture, but blacks still exude a lovely depth and crisp whites never bloom. A nicely varied gray scale brings out textures in costumes and fabrics, background elements are easy to discern, and close-ups are so clear, it's easy to spot a cold sore on Crosby's lower lip during a couple of scenes. Only a few stray marks dot the pristine source material and no digital anomalies afflict the transfer. Once again, an Olive Signature Edition provides a top-notch product, and we can only hope more fine films get the same red-carpet treatment in the future.

The only Oscar The Bells of St. Mary's received was for Best Sound Recording, and Olive honors the work of Stephen Dunn with an excellent DTS-HD Master Audio mono track. Sonic accents like the shrill school bell, a screeching cat, shattering glass, and honking car horns make notable impressions, while subtleties such as creaking floor boards supply essential atmosphere. All the dialogue is clear and easy to comprehend, the Oscar-nominated music score by Robert Emmett Dolan fills the room with ease, and Bing's iconic tones during his musical interludes sound rich and full. A wide dynamic range keeps distortion at bay, and no age-related hiss, pops, or crackle intrude.

Olive always goes the extra mile with its Signature Edition releases, and several interesting supplements provide plenty of context and perspective on The Bells of St. Mary's.

The Bells of St. Mary's can't be classified as a holiday film per se, but its inspirational tone, heartwarming presentation, and spiritual slant make it especially appealing during the Yuletide season. Beautifully directed by Leo McCarey and acted with sincerity and grace by Bing Crosby and Ingrid Bergman, this whimsical, emotionally affecting follow-up to Going My Way still hits all the right notes today. Olive Films honors this Oscar-nominated classic with a handsomely packaged Signature Edition that's distinguished by a new 4K restoration of the film, lossless audio, an array of absorbing supplements, and a slick eight-page booklet. During these turbulent times, The Bells of St. Mary's renews our faith in humanity, but its simplicity and honest emotion will forever lift anyone's faltering spirits. Highly recommended.

Sale Price 20.66
List Price 39.95
Buy Now
3rd Party 29.2
In Stock.
See what people are saying about this story or others
See Comments in Forum
Previous Next
Pre-Orders
Tomorrow's latest releases