The Bad and the Beautiful

The Bad and the Beautiful may not be the best movie about Hollywood to come out of Tinseltown, but it might just be the glossiest. Director Vincente Minnelli's lavish episodic melodrama about a brilliant megalomaniac producer who manipulates the lives of his co-workers for the sake of his art - and ego - lacks the edginess and grit of more realistic films, but there's more than enough glamor to go around. An all-star cast enlivens the ho-hum story, as does Warner Archive's sparkling new 4K remaster, which beautifully showcases everything we love about Hollywood's Dream Factory. Recommended.

Movies about the movies are always a mixed bag. While the seamy underbelly of a tarnished Tinseltown has been well documented for decades, Hollywood has always been a little sheepish about splashing its shameful practices across the screen. It's tough enough for an industry built on fantasy to produce a realistic tale, let alone one that paints an unflattering portrait of itself. Though the best Hollywood yarns scrub off the thick layers of makeup to reveal the naked, hardcore truth underneath, such exposés are all too rare.

They were even rarer during Hollywood's Golden Age. Sunset Boulevard and A Star Is Born rub some of the bloom off the film world's glamorous image with their frank depictions of addiction, egomania, and moral and physical decay, and The Bad and the Beautiful - if you believe its trailer - promises to do the same. Unfortunately, director Vincente Minnelli's dark, episodic drama about a manipulative, megalomaniac producer who brutally betrays a director, writer, and actress wimps out when it matters most, and winds up forgiving sadistic behavior instead of denouncing it. Yes, the film takes a couple of shots at the Dream Factory, but they're only flesh wounds, not devastating blows.

As the film opens, three talented Hollywood professionals reluctantly convene in the office of studio head Harry Pebbel (Walter Pidgeon), who hopes to convince them to abandon their grudges and work one more time with disgraced producer Jonathan Shields (Kirk Douglas). A brilliant visionary with insatiable ambition who skyrocketed to fame by leaving a trail of human casualties in his wake, Shields mentored director Fred Ameil (Barry Sullivan), actress Georgia Lorrison (Lana Turner), and writer James Lee Bartlow (Dick Powell) before screwing them in various ways. "Art for art's sake" may be MGM's motto, but "art for Jonathan's sake" is Shields' unspoken mantra, and his all-consuming ego and narcissism alienate everyone who crosses his path. 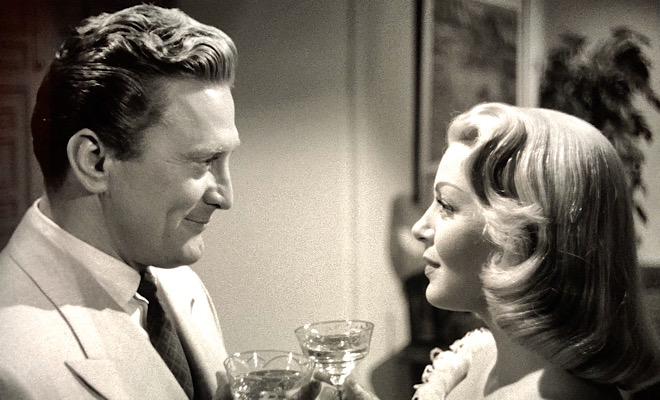 In lengthy flashbacks that form the bulk of the film, Fred, Georgia, and James each recall the exhilarating highs and devastating lows of their respective collaborations with Jonathan, who gave them all their big breaks before using them to his advantage. (Rumor has it Jonathan is loosely based on Gone with the Wind producer David O. Selznick, Georgia is modeled after John Barrymore's troubled daughter Diana, and James Lee and his wife Rosemary [Gloria Grahame] are knock-offs of F. Scott and Zelda Fitzgerald. Other characters represent such notable Hollywood figures as Alfred Hitchcock and his wife Alma and Erich von Stroheim.) Along the way, we get a supposed inside look at the film industry, but what we see isn't particularly enlightening. The slick story often meanders and the accomplished stars try too hard to rev its engine and eclipse the lush trimmings that constantly threaten to engulf them.

The glossy nature of The Bad and the Beautiful isn't that surprising, considering Minnelli's history of directing such sumptuous, artistic musicals as Meet Me in St. Louis, An American in Paris, The Band Wagon, and Gigi. Those lavish movies define the fantasy ideal The Bad and the Beautiful seeks to expose as a fraud, but because Minnelli was such a loyal MGM company man (his 22-year tenure as a contract director was the longest in the studio's history), it seems he can't quite bring himself to bite the hand that feeds him. Though Minnelli may recognize Hollywood's dark side, he's unwilling to fully embrace it, and The Bad and the Beautiful suffers as a result, compromising when it should rebel.

Minnelli's melodramas also tend to go wildly over the top, often bordering on camp, and The Bad and the Beautiful - though not quite as broadly played as The Cobweb or Two Weeks in Another Town - is no exception. The Oscar-winning script by Charles Schnee gives Douglas and Turner plenty of opportunities to chew the scenery, and they willingly oblige. Though both file impressive overall portrayals (Douglas nabbed a Best Actor Oscar nod and many feel Turner was snubbed when she didn't receive a nomination), the following scene shows just how far Minnelli let them go.

Eat your heart out, Mr. Toad. That wild ride, which was shot three months after principal photography was completed and required numerous takes due to the complex special effects, has become the movie's signature scene. Turner's hysterics, for better or worse, define The Bad and the Beautiful, but they also made disapproving critics who previously viewed Turner only as an alluring sex goddess sit up and take notice. Though MGM mired Turner in one-dimensional, ornamental roles throughout her 17-year stint at the studio (her smoldering turn as a murderous femme fatale in The Postman Always Rings Twice six years earlier was a rare exception), Turner finally got the chance to sink her teeth into a juicy part, and thanks to Minnelli's careful tutelage (much like Jonathan coaches Gloria in the film), she at last received recognition for her acting instead of her looks.

The Bad and the Beautiful holds the distinction of winning the most Oscars for a film that wasn't nominated for Best Picture or Best Director. It snagged five statuettes (more than any other movie that year), the most notable of which was Grahame's head-scratching win for Best Supporting Actress. Though competent and charming, Grahame, who plays a simpering Southern wife who becomes blinded by Hollywood's glitz, has no big emotional moments and is only on screen for a scant nine minutes...barely enough time to make an impression. (Until 1976, hers was the briefest performance ever to win an Academy Award.) Far more deserving was Jean Hagen's riotous portrayal of squeaky-voiced silent star Lina Lamont in Singin' in the Rain, but how often does the finest work prevail?

In addition to Schnee's Best Screenplay Oscar, The Bad and the Beautiful took home prizes for Best Black-and-White Cinematography, Best Black-and-White Art Direction-Set Decoration, and Best Black-and-White Costume Design. Yet the lack of a Best Picture or Best Director nomination defines this film in a nutshell. The Bad and the Beautiful boasts several top-notch components, but like so many movies, the whole doesn't add up to the sum of its parts. The film has a nagging disjointed feel, despite tying all the storylines together, and exudes a prevailing coldness that keeps us emotionally detached. Worst of all, the pro-Hollywood ending, though clever, leaves a sour aftertaste, especially in this post-Harvey Weinstein age.

In the end, The Bad and the Beautiful celebrates everything we love about Hollywood, but can't quite fess up to the industry's real and disturbing failings. See it for the attractive all-star cast and shimmering production values, but take its story with a huge grain of salt...or better yet, wash it down with a very dry martini. Like the beauty so often glorified on screen, the substance of Minnelli's film only goes skin deep. 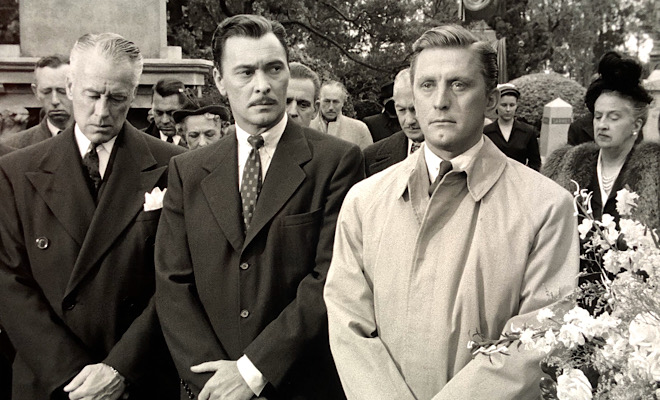 The Bad and the Beautiful arrives on Blu-ray packaged in a standard case. Video codec is 1080p AVC/MPEG-4 and audio is DTS-HD Master Audio 2.0 mono. Once the disc is inserted into the player, the static menu without music immediately pops up; no previews or promos precede it.

A lush, expensive film that wins Oscars for cinematography, art direction, and costume design deserves a top-notch transfer to properly showcase and celebrate all the artistry on display, and that's exactly what The Bad and the Beautiful gets. A new 4K master struck from the movie's original camera negative is the source for this exceptional 1080p AVC/MPEG-4 transfer from Warner Archive. From the moment the in-your-face opening credits begin to roll, it's evident how much care went into this crisp, vibrant rendering. Superb contrast, clarity, and gray level variance lend the picture a wonderful immediacy, and there's just enough grain to preserve the feel of celluloid. Inky blacks anchor the image, while bright whites supply bold accents. The textures of furs and costumes come through clearly, day-for-night scenes look spectacular, and background details are easy to discern. The close-ups of Douglas wonderfully showcase his cavernous chin cleft and those of Turner ooze Hollywood glamor. Best of all, nary a nick, scratch, or errant speck of dirt mar the pristine print. In short, there's nothing bad about this beautiful transfer, which faithfully honors Robert Surtees' striking, Oscar-winning cinematography and brings Minnelli's film to life like never before.

The DTS-HD Master Audio 2.0 mono track beautifully renders David Raksin's glorious score, which for some inexplicable reason was not nominated for an Oscar. Superior fidelity and depth of tone allow the sweeping strings to fill the room, and a wide dynamic scale embraces all the highs and lows without a hint of distortion. All the dialogue is crystal clear, and sonic accents and atmospherics nicely punctuate the track without disrupting its balance. A slight bit of surface noise occasionally can be heard during quiet moments, and too many competing elements jockey for prominence during the cacophonous party scene, but those are minor hiccups in an otherwise quality effort.

It sure is beautiful, but not as bad as it could and should be. Warner Archive's glorious 4K remaster of The Bad and the Beautiful showcases the film's sumptuous production values and glamorous stars like never before, but director Vincente Minnelli's classic "inside" look at the movie business and one brilliant producer's egomanical machinations takes a blunt knife to the sharp-edged, cutthroat industry it depicts. Excellent performances and Lana Turner's legendary hysterics make this flick a fun ride, but as an exposé it falls short. Lucky for us the luscious video transfer makes the story easy to digest, and a feature-length Turner documentary adds extra appeal to the disc. Make no mistake, The Bad and the Beautiful is a well-made film; it's just a little too slick for its own good. Recommended.

Sale Price 17.99
Buy Now
3rd Party 10.87
In Stock.
See what people are saying about this story or others
See Comments in Forum
Previous Next
Pre-Orders
Tomorrow's latest releases